High and Dry in Bharatpur

Ever since I attended an inspiring talk on the Birds of Bharatpur at an Oxford Ornithological Society meeting some years ago, this near-legendary site, the former hunting grounds of a Maharajah and the wintering grounds of the last remnants of the western population of the endangered Siberian Crane, has loomed high in the list of sites I've dreamed of visiting. My chance to achieve this long-standing ambition came earlier this month when my non-birding partner (a seasoned traveller) suggested we spend a couple of days there during a two-week trip to India. However, unfortunately, my dreams were only partly fulfilled and it seems I'll have to make another trip some other time to experience the real Bharatpur.

We'd originally aimed for a flight-only deal to Delhi, but the costs proved prohibitive. However, we found a two-week package deal to Goa which offered sufficient savings (even with accommodation included) that we decided we could afford to take an internal flight to Delhi. The flight-and-accommodation deal to Goa cost around £360, and an internal one-way flight to Delhi via Mumbai was around £140 (slightly less for under-30s).

Thus we arrived in Goa on 29th November, spent a day exploring the salt pans around our hotel in Arpora (close to the well-known beach resorts of Baga and Calangute), then caught our delayed two-hour flight from Dambolim Airport to Delhi (with an hour or so stopover at Mumbai airport following a missed connection).

After two nights and the intervening day sightseeing in Delhi, we took a train for the 3-hour journey to Bharatpur Junction. En route I saw a few waterbirds in trackside fields, including Black Ibis and various storks, egrets and waders, but I didn't worry too much about identifying them from these fleeting views as I assumed I'd get much better views in the famous Keoladeo Ghana National Park at Bharatpur. However, I was to regret this laziness. We arrived in Bharatpur town at lunchtime, had a bite to eat (during which a Crested Serpent Eagle drifted over), then hired a rickshaw to the reserve, a kilometre or so from the edge of town. The first thing we were confronted by was a sign at the gate warning visitors that due to the almost complete failure of this year's autumn monsoon, the number of waterbirds was well down on the norm. This proved to be something of an understatement. I'd already been warned that the Siberian Cranes had yet to put in an appearance this season, but I wasn't prepared for the acres of bone-dry grassland and scattered trees where there should have been wide jheels (shallow monsoon lakes) carpeted with gallinules, jacanas, storks, egrets, ducks, geese and cranes.

Only in one small area where water was being pumped into a shallow lagoon, and in a few stagnant livestock watering holes, were there a few waterbirds — but a handful of Black-necked Ibis, one Intermediate Egret, a few Indian Pond Herons and White-breasted Waterhens was not the feast of waterbirds I'd been anticipating. The only geese and ducks we could find were a small flock of Greylags and a group of Shoveler with two Teal on a stagnant cattle pool (though the basking turtles, high temperatures and accompanying Red-wattled Lapwings and Greater Coucals at least reminded me that I wasn't birding a winter reservoir in Britain!)

Nevertheless we made the best of it with the help of a talented local "naturalist guide" (70 rupees, or approximately £1, per hour) and picked up a number of landbirds I'd probably have missed otherwise. Highlights included a solitary Plum-headed Parakeet among the much commoner Rose-ringed (Ring-necked) Parakeets, a pair of Spotted Owlets, another cracking Crested Serpent Eagle and roosting Indian Nightjar, Grey Nightjar and Collared Scops Owl. Needless to say we didn't encounter the solitary tigress which our guide assured us was present (see below).

Fortunately this was my first trip to Asia, so most of the birds I was seeing were new to me — thus we still enjoyed our day and a half in and around the desiccated reserve. For all that, the highlight was an 8- or 10-foot Indian Rock Python which we found sunning itself beside its trackside burrow at a range of a few feet (after a visit to a known burrow with our guide had revealed only a skein of shed skin to indicate the presence of its erstwhile resident). 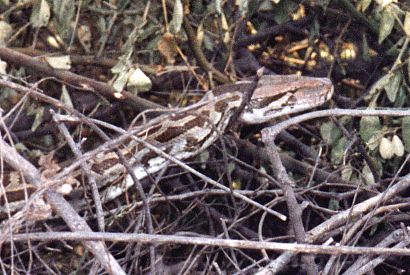 Although there appeared to be sufficient water in the local wells and "tanks" (reservoirs) following the failed monsoon to support the needs of the local population and their agriculture, the lack of birds has had a serious effect on the local tourist trade this year. This had the minor advantage for us that the Park was not thronged with visitors and accommodation was easy to come by, but did mean that the smaller pool of tourists suffered more intensely the incessant hassle one gets from rickshaw drivers, hotel touts and the like in all touristed areas of India.

From Bharatpur we took a bus to Agra, with a stopover to view the famous palaces of the abandoned city of Fatehpur Sikri. The Yamuna River flows right behind the Taj Mahal in Agra and despite being heavily polluted (one report claims it is incapable of supporting any life-forms) produced Avocet, Ruddy Shelduck, River Tern, Egyptian Vulture, Painted Stork and Eurasian Spoonbill (plus the ubiquitous Black Kite and Ring-necked Parakeets to be found in most Indian cities).

From Agra we took a gruelling 36-hour train trip to Goa via Bhopal and Pune (Poona); we realised later that the route took us over the bridge that crosses the Dudhsagar Waterfalls (the second-highest in Asia) which we were to visit later by road, but unfortunately even if we'd realised and set our alarm clocks we'd have seen little of these spectacular falls in the darkness.

The second week of our trip, back in Goa, was much more relaxing and the quality of birding much more satisfactory. The poor monsoon does not seem to have been so severe in the south of India and water levels seemed normal. Kingfishers (we saw Common, White-throated, Pied and Stork-billed) were everywhere, as were Little Cormorants, Indian Pond and Green-backed Herons, various Eurasian waders and four species of egret (Cattle, Little, Great White and Intermediate). For a wider range of less familiar waterfowl I took a trip to Carambolim Lake near the former Portuguese colonial city at Old Goa, and was rewarded with Spot-billed Duck, Lesser Whistling Duck, hundreds of Purple Swamphens (Gallinules), Bronze-winged and Pheasant-tailed Jacana, a flock of Asian Openbill storks, 50 or so Small Pratincoles coming in to roost, and much besides (including a Marsh Crocodile or Mugger), though I missed a reported Comb Duck lurking in the middle of this large lily-covered lake. 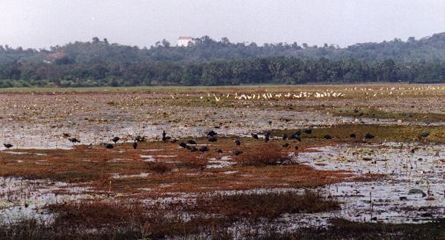 However, probably my most rewarding outings were the couple of times I ventured alone at dawn into the jungle along the ridge that separates Baga from Anjuna (as recommended in Kazmierczak and Singh's excellent A Birdwatchers' Guide to India (Prion)), a short walk from our hotel. It was great to get away from the hustle and bustle of the resorts into the relative cool and stillness of the early morning jungle. At first glance the dense undergrowth seems almost devoid of life, but sit quietly and wait and you become aware of numerous rustles and flutterings around you. Sometimes the cause of the noise never resolves itself into a firm sighting but with patience, glimpses of various species, almost all new to me, could be had. Sometimes I was not even sure to which family the bird I was looking at belonged, but it was nevertheless hugely entertaining scrabbling through the 1300-odd species in my field guide (Pocket Guide to the Birds of the Indian Subcontinent (Helm)) trying to match what I was seeing. I encountered nothing in the least bit unusual, as far as I can gather, but each trip was a joy as I scratched the surface of the huge number of new species there to get to grips with. The highlights that stick in my mind are a stunning Tickell's Blue Flycatcher devouring a large caterpillar with obvious relish; a bold and endearing White-rumped Munia that came so close to me as it nibbled at weed seeds on a jungle trackway that I thought it was actually going to perch on my boots; a party of characterful Tawny-bellied Babblers scrabbling through the leaf litter; and a stunning Black-lored Tit, a delightful life tick minutes before I reluctantly decided to head back to the hotel to pack for the flight home on our last morning.

For all the disappointments of Bharatpur, this won't be my last visit to the subcontinent. With last-minute deals to Goa available for as little as £99, I'll certainly be back — and hopefully so will the monsoon on which the birds of the Keoladeo Ghana reserve and the local tourist trade so heavily rely.

A full bird list for the fortnight follows. It only goes to show how prolific the avifauna of India is, as I should stress that this was not a dedicated birding holiday and these 164 species were seen during a day and a half at Bharatpur in unproductive conditions, a half day at Carambolim Lake, three or four short strolls from our hotel and casual birding while sightseeing. I've omitted lots of "probables" and I'm ashamed to say a lot of hirundines, warblers, pipits and raptors went unidentified. A further hundred species would probably be possible with a little more experience, more effort and some dedicated site visits (particularly to the forest reserves such as Bondla or Molem in the Western Ghats, two or three hours south and west of the main Goan beach resorts). Species order and bird names follow that in the Pocket Guide to the Birds of the Indian Subcontinent.

Addenda: Subscriber Jeff Higgott adds: "I read with interest the write-up of your Indian trip. Not sure whether the tigress is still present but it was certainly around when we were there (February 2001). We saw plenty of pug marks but didn't see the animal. Our guide took us into the area beyond the "tigress - do not go beyond this point" sign birding. He said that he once slept in the area overnight and awoke to find the tigress only 30m away. Given their natural avoidance of people and the number of locals who happily walk through Bandhavgar (where we saw 4 tigers in 5 days) I can believe it. Bharatpur has had three dry winters in a row now."

Adrian Royle adds: "I visited in February 1999 when still wet, a fabulous way to celebrate my 40th birthday. No tiger about then, but a Siberian Rubythroat put on a nice show. I returned in November 2000, very dry. Water was being pumped up from underground. Quite a disappointing visit, although the Siberian Cranes were in residence and viewed from very close up. The highlight was a Greater Adjutant stork."

For an update on the monsoon situation for autumn 2003 see Water (and Birds!) at Bharatpur by Mike Prince.
Written by: Dave Dunford