Louder than a thunderclap, a baby crying or a chainsaw, and not far below the roar of a jet engine, 116dB is how loud the calls of a Screaming Piha register on the decibel scale. For context, hearing loss can happen when exposed to sound as low as 85dB.

This dull grey, blackbird-sized member of the family Cotingidae is a common but elusive bird of humid Amazonian forests and Andean foothills. A bird that falls short on looks, it certainly makes up for its lacklustre plumage with an extraordinary set of pipes.

In that moment, it was quite surreal and meditative to find myself floating in a canoe, meandering quietly through flooded Colombian Amazonian forest, and yet somewhat antithetical to be surrounded by the calls of one of the loudest birds on the planet. The lush habitat flanking these submerged arboreal alleyways were home to quieter, yet thankfully more dazzling avian prizes such as Bronzy Jacamar, Crimson-crested Woodpecker and White-crowned Manakin. 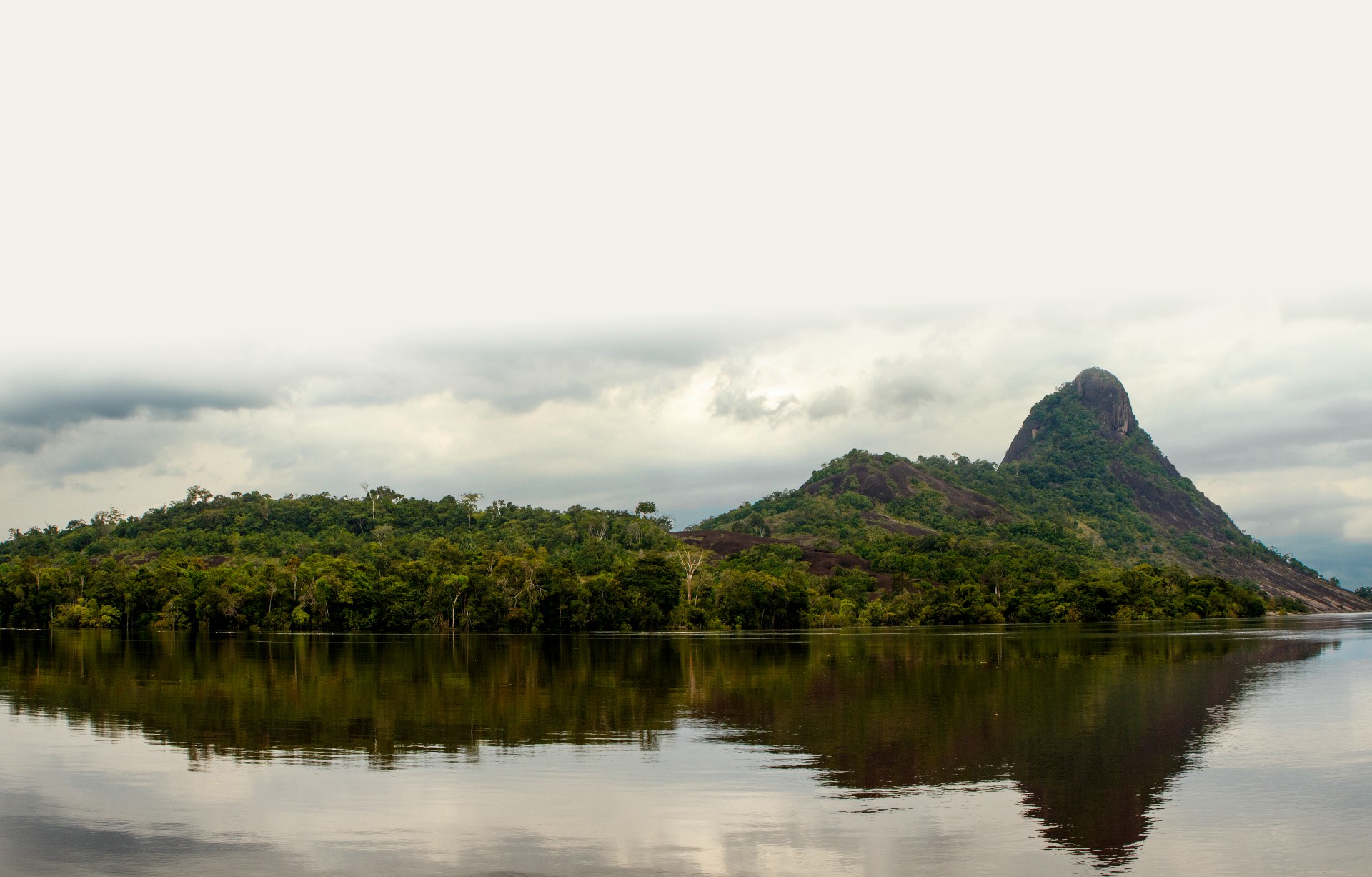 The three mountains of Cerros de Mavecure gave up brief views of Swallow-tailed Kites, as well as Amazon River Dolphin in the water (Julian Hough).

I had come here to Colombia with a group of birders and journalists assembled by ProColombia, a government agency dedicated to the promotion of sustainable ecotourism. In conjunction with Swarovski Optik, they had chosen this destination to launch and promote a new line of binoculars: the NL Pure. I'm not typically a birding optics evangelist, but the 8x32 model delivered an amazing conduit to experience the wealth of avifauna on the trip.

Colombia is well-known as one of the most biodiverse countries on earth, a result of two oceans and three mountain ranges. More than 1,900 bird species have been recorded in Colombia, equivalent to 20% of the entire world's species in one relatively small country. In association with Manakin Nature Tours, our sharp and organised Colombian guides Luis Urueña and Daniel Camilo Orjuela had chosen to show us a hidden jewel of Colombia that until now had rarely been visited by any birders and tour groups and has a list of more than 400 species.

Inírida is situated in the tropical grassland plains of the southern llanos that dominate eastern Colombia, 27 km from the Venezuelan border in the department of Guainía. The ecoregion has a tropical savannah climate with a dry season between December and April. The area is the transition zone between the true Amazon forest to the south and the grasslands and white sand forest habitat to the north.

It is this mix of diverse habitat of rainforest, that yields many species not easily found in other parts of Colombia, including Pompadour and Spangled Cotingas, Yapacana Antbird, Imeri Warbling Antbird, White-naped Seedeater, Black Manakin, Short-billed Honeycreeper, Swallow-winged Puffbird, and Burnished-buff and Black-faced Tanagers. The region has recently received press due to the 2017 discovery by Colombian birder Pablo Florez of an antshrike very like Chestnut-backed which may prove to be a new species unique to the Inírida area that further bolsters its appeal as the new trendy place to visit. 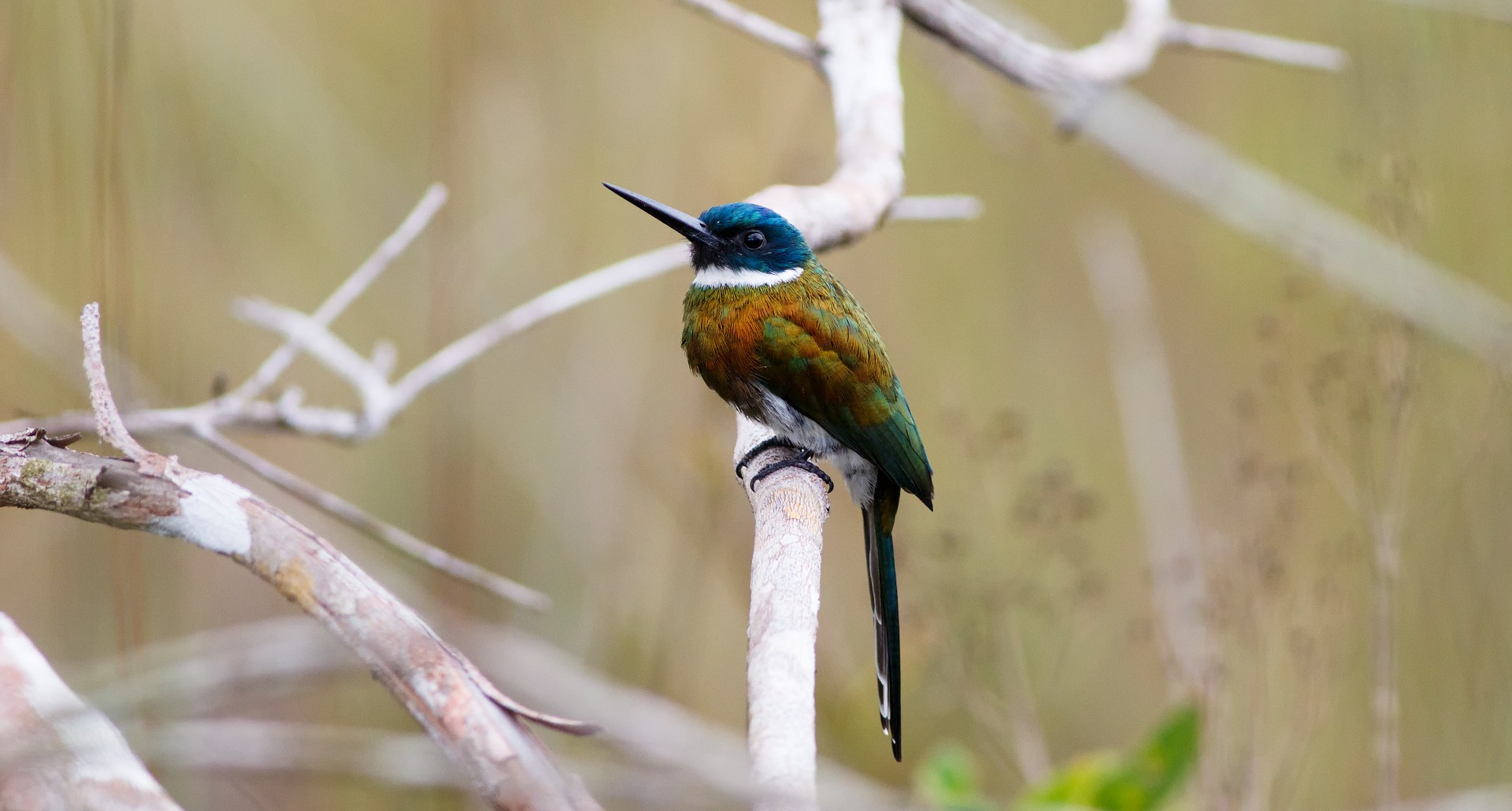 The dazzling Bronzy Jacamar is one of the highlights of the region (Julian Hough).

With no access by road, the main town of Puerto Inírida is literally in the middle of the jungle reached only by air or river boat. Flying in, the unspoilt vastness and remoteness of Inírida is spectacular. We arrived during the rainy season (June-August), so huge swathes of prime forest had become submerged by the rising waters of the Inírida and Guaviare Rivers, both tributaries of the mighty Orinoco River. These watercourses form a confluence near Inírida, turning the waters black with fluvial live-giving sediment.

Most of our birding would be done by boat and canoe, a unique amphibious way to explore the vast jungle habitat that is home to many of Inírida’s indigenous communities. These communities will hopefully be a key factor in the growth of birding and ecotourism in Inírida.

"The objective is to give these groups different opportunities and tools so that they can earn their own money," Luis Urueña, owner of Manakin Nature Tours and our guide commented. "Tourism is a great alternative because more employment in nature means fewer jobs in illegal areas. Our job is to try to provide tools to take care of nature and promote tourism while leaving illegal activities aside."

Access is largely restricted, but there are regular daily flights from Bogotá and the infrastructure of Inírida allows easy access to many of the birding hot-spots during the dry and wet seasons, although the drier seasons are likely to produce a bigger bird list and a better chance of seeing Giant Otter and waders and the impressive Large-billed Tern that utilise the exposed sandbars. 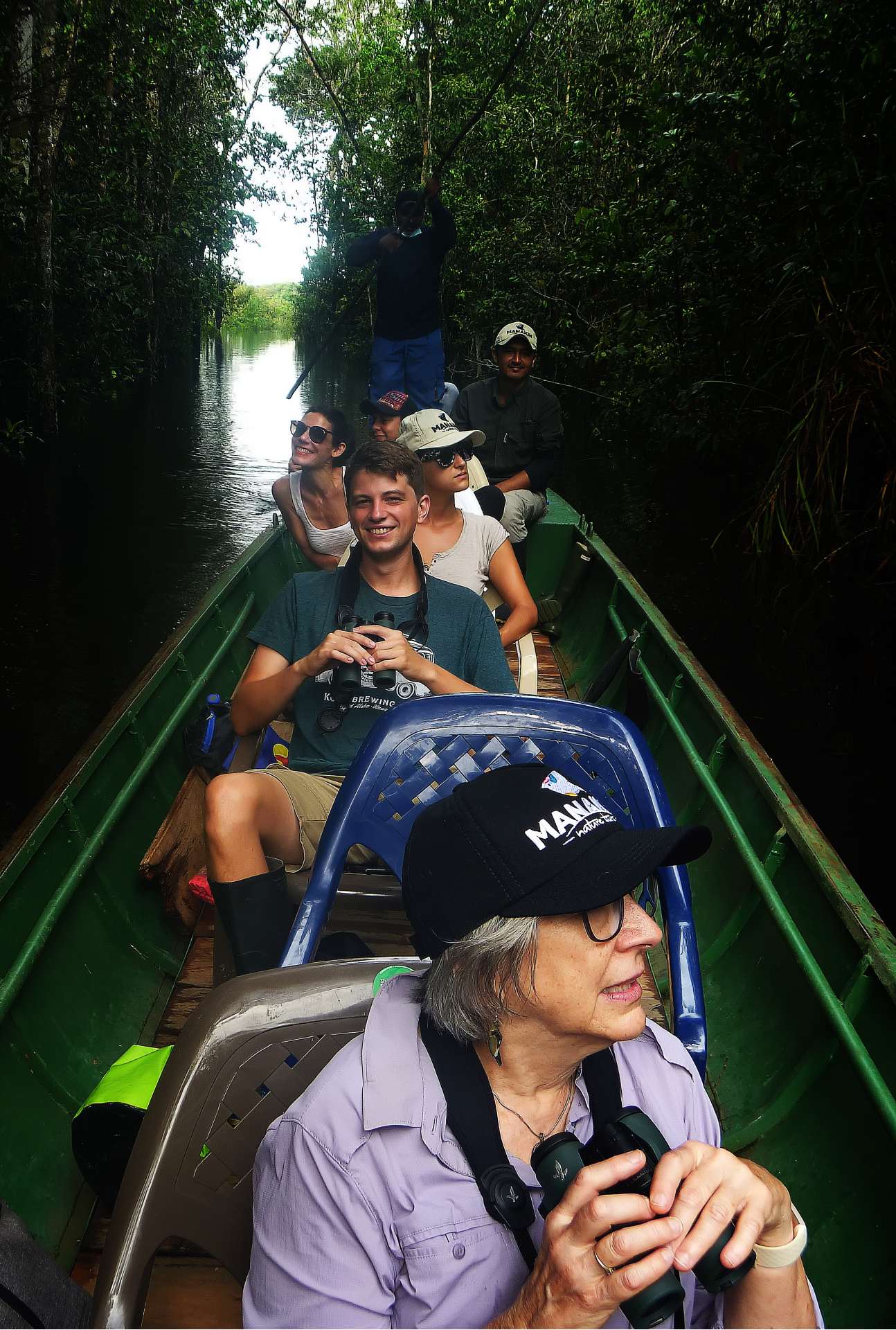 Transportation was mainly by boat, making for a unique birding trip (Julian Hough).

Although the temperature rose during the day, the overcast weather kept birding comfortable. Thankfully we avoided any bouts of rain on our short three-day trip, so didn't lose any birding time – always a bonus when visiting the tropics during the wet season. One other highlight was the absence of any biting insects for the most part.

A canoe trip to Caño Carbon, an area of land of the Sabanitas community, delivered great views of Sunbittern, Amazon Kingfisher, Blue-and-Yellow Macaw, Golden-spangled Piculet, Crimson-crested Woodpecker and the dapper Black-headed Parrot. Our target was an Inírida speciality: the strange-looking Capuchinbird. While widespread in northern South America, this hard-to-see member of the Cotingidae family is a large, coffee-coloured frugivore with a large bill and a bald head and a unique call that has been described as sounding like a chainsaw or a mooing calf.

Other specialities here are Blackish Nightjar, Brown-banded Puffbird and Yellow-throated Woodpecker, while venturing out into the more open flooded plains revealed raptors including Grey-headed Kite and Pearl Kites, Black-collared Hawk, Bat Falcon and the omnipresent Greater Yellow-headed Vultures. Back at the village, we were cooled down by chilled fresh coconut water and treated to a freshly prepared lunch of fresh-caught fish, rice and patacones. Birding at its best. 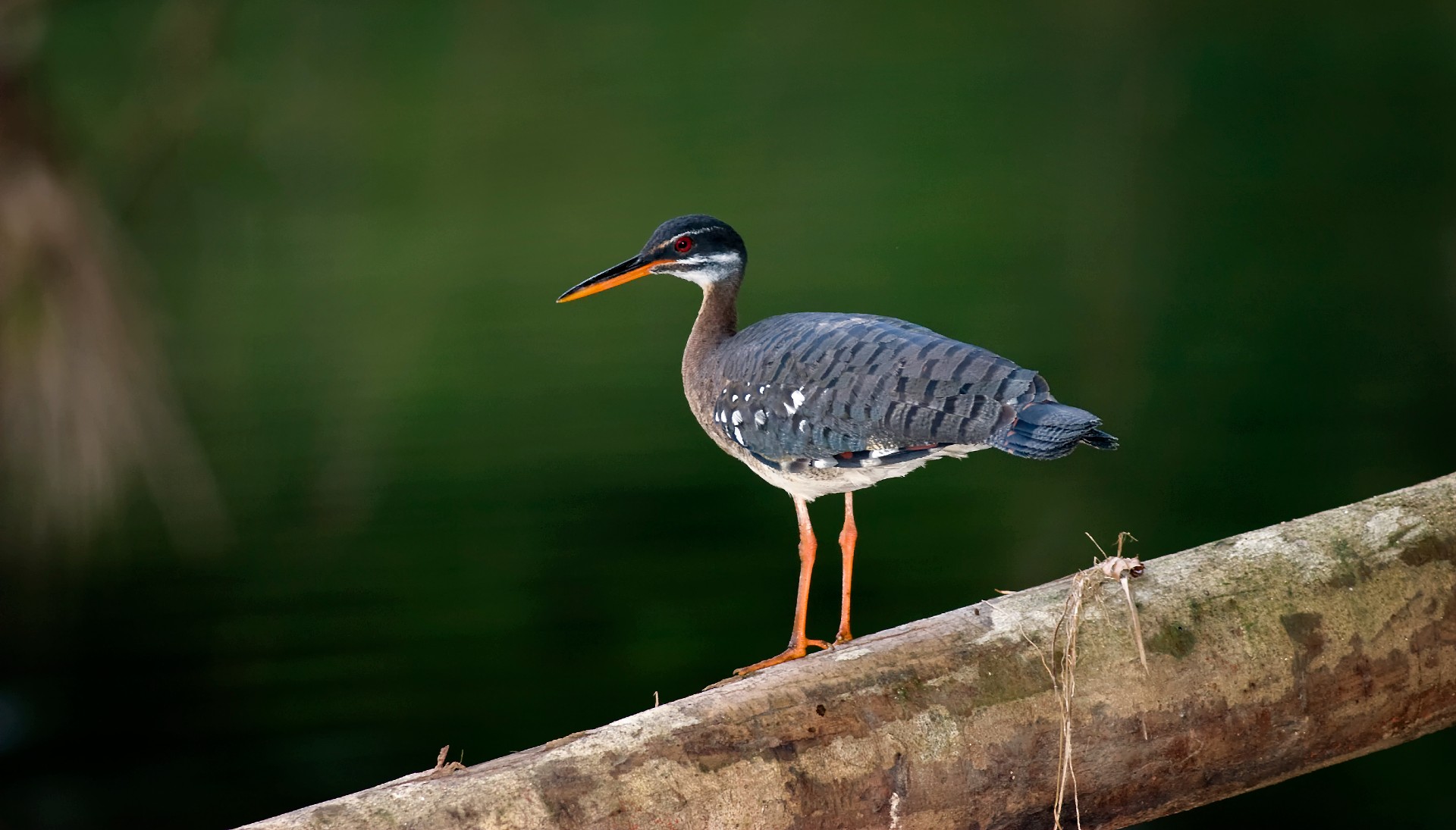 Incredible views of Sunbittern were obtained during a canoe trip to Caño Carbo (Julian Hough).

We boated back to the vans and retired to our birder-friendly Hotel Fuente del Guainia, on the edge of town. A delightful and clean hotel, where our days started early out on the lawn drinking fresh Colombian coffee, eating fresh fruit watching Red-and-green Macaws and Scarlet-shouldered Parrotlet fly overhead. Birding the allotments, scrubby forest and areas around town can produce a good list of species including Swainson's and Fork-tailed Flycatchers, Tropical Kingbird, Green-tailed Goldenthroat and White-winged Becard.

A short drive from town puts you into the drier and scrubbier white sand forests and open savannah habitats. A product of erosion of the Guiana Shield, these sandy soils are poor in nutrients and provide a transitional habitat that birders are unlikely to encounter in the more southerly Amazonian region. Birds we saw here included Least Nighthawk, Brown Jacamar, Cherrie's Antwren, Chestnut-fronted Macaw, Collared Plover, Plumbeous Euphonia, the dazzling Ruby-topaz Hummingbird and the local, and often hard to see, Azure-naped Jay.

The final showpiece outing of the trip was a visit to the Cerros de Mavecure – three impressive grey monolithic domes that rise dramatically from the flatlands of the Orinoco River basin. Known locally as tepuyes, which translated from indigenous language means dwelling place of gods, these are some of the oldest rock formations on the planet and form part of the Guiana Shield. 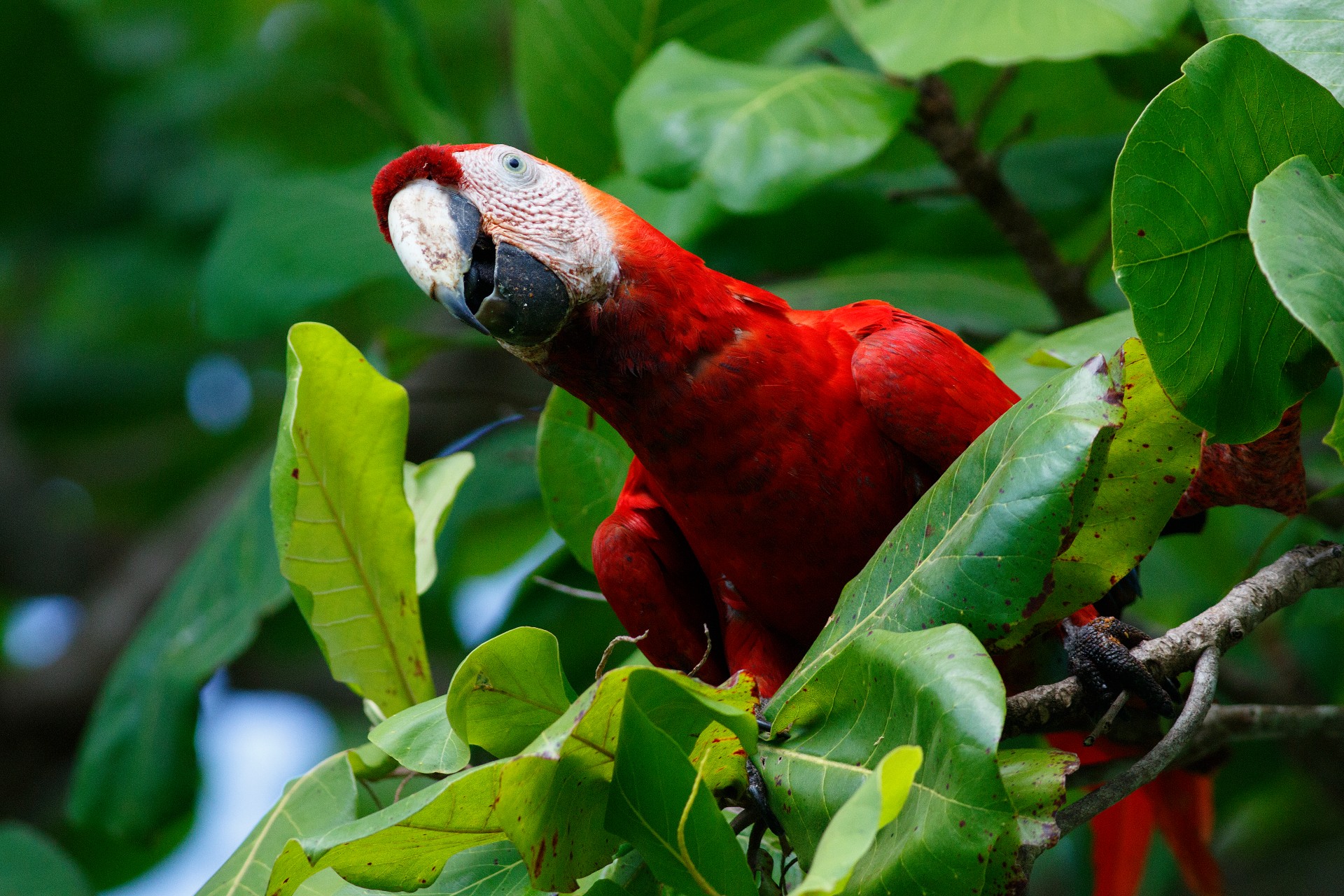 Scarlet Macaw was one of several parrot species seen on the trip (Julian Hough).

A popular tourist destination, this area is where the myth of the Princess Inírida originates; it is a sacred place for different Amazonian indigenous tribes. Situated some 48 km from Inirida, it is only accessible by a 2-hour speedboat ride. We took in some regional specialities along the Matraca Trail en route that included Orinoco Softtail, Long-billed Woodcreeper, Amazonian Umbrellabird and Rose-breasted Chat. At the Cerros de Mavecure, we managed brief views of two Swallow-tailed Kites, the strange, pink, freshwater Amazon River Dolphins and the dapper Capped Heron before a relaxing sunset cruise back to port.

This was my first visit to one of the undiscovered places of Colombia's 'Wild East' and I highly recommend it. A number of diverse habitats within a short distance of the main town provide a selection of species not easy to see in other areas of the country. With a great deal of time, energy and money being spent to preserve habitat by companies such as Manakin Nature Tours and supported by government agencies such as ProColombia, Inírida will soon become a staple destination for many more birders.

I travelled to Inírida courtesy of ProColombia and expertly guided by Luis Uruena of Manakin Nature Tours and Daniel Camilo Orjuela of Orinoco Nature Tours. Thanks to Dale Forbes of Swarovski Optik who kindly provided the use of NL Pure binoculars for all participants. Growing up in Lancashire, Julian spent his formative years birding all over the UK where he was a familiar figure on the twitching scene. Bewitched by extended periods studying migration in Cape May, New Jersey, he finally moved to the US in the late 90s. With a focus on identification, he has written several articles for Birdwatch over the years.