Here's some that got away

I've been waiting for a quiet time in the birding schedule to share a few of what I might call 'hard luck stories': tales of the 'ones that have got away'. I'm sure we've all got stories of 'mystery birds' we'd like to return to — or rarities overlooked that someone else came along and stole from us minutes or hours after we'd passed by. Here are some of mine after twenty-five years of birding.

My first episode occurred very early on in my birding life, in fact when I was still a schoolboy, and when I was still what I would call simply a birdwatcher, rather than the more pro-active birder or twitcher that I later came to be. I'm not going to provide what you'd call 'excuses' for every one of these 'errors' in my birding 'career', but I shall, in most cases, offer what I'd call 'mitigating circumstances'. This was October 1982. I was fifteen years old. I was very lucky to have been brought up right next to the coast and not far from one or two very good birding spots that were to fulfil their promise for me on numerous occasions in the course of the next ten or so years. But in 1982 I'd barely heard of a thing called Pallas's Warbler when I got a phone call to tell me one had occurred on what was to become my local patch not too long after this particular event. Whitburn, Tyne and Wear: Saturday morning; I learned for perhaps the first time what it was to 'dip out' on a bird; to miss seeing something that had been present the previous day, the first Pallas's Warbler for the county in this instance. Along with ten or fifteen others who hadn't managed to make it in time on the Friday afternoon, I stared at a small area of elderberry bushes in the corner of Marsden Quarry, unsuccessfully trying to will this exciting-looking bird I'd just recently seen a picture of into view. But it was gone. Remarkably, two nights later, I got a second telephone call telling me that no fewer than three of these tiny Siberian vagrants had somehow arrived on our little stretch of coast. (This was, after all, the October of the first famous Pallas's invasion to Britain with over a hundred of these former gross rarities appearing.) 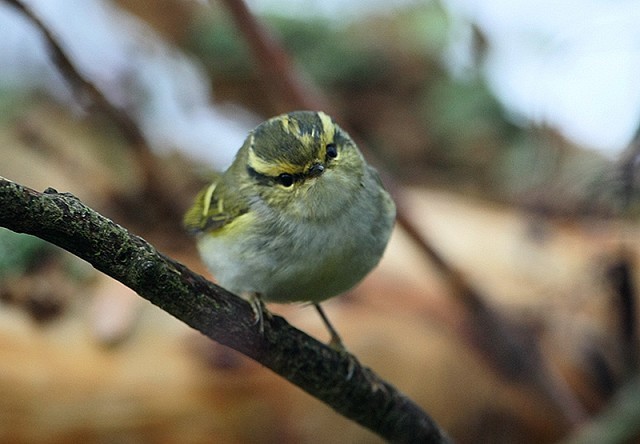 The trouble on this second occasion was that tomorrow was a school day for me. I worked out I would have about twenty minutes to spare first thing in the morning if I was to go to one of the sites were these Pallas's had been seen, before I'd have to hop on to a bus back into town and arrive at school in time for the morning register. I must have awoken about five in the morning and, unable to get back to sleep in my excitement, I left the house soon after, walking the four miles to the site to be there by dawn. I found myself in a scenario that must have had a deep resonance for my young formative soul at the time. I had only twenty minutes of it, but was an occasion that was to burn deeply into my being, and one that still holds echoes to this day. For a start it was extremely foggy; the Whitburn foghorn that was attached to the Souter Point lighthouse is at little more than ground level, and I had to count the pauses between its deafening bellows in order to work out when to press my hands against my ears as I passed en route to the Pallas's. A light to fresh easterly wind brought the cold, salty tang of the North Sea fresh to my nostrils. These were your classic fall conditions; and the imprinting they had on my mind was completed by the fact that here at my feet, actually on the ground, were literally scores of Goldcrests —&#8201a fall of the like (despite all the hype such east-coast falls engender) that I only rarely ever encountered again in my ten years of birding the east coast as a local patch.

I hurriedly checked through as many Goldcrests as I could, hoping desperately for a match for the picture of the Pallas's Warbler I'd been staring at all last evening in my Hamlyn Guide to the Birds of Britain and Europe. But none came. Along a small, bare gully at the point where I decided my twenty minutes were up and where I would have to turn round and head for the 8:30 bus, I glanced briefly at a small brown warbler that I immediately ignored as not being at all right for a stripy Pallas's. "Chiffchaff," I thought, shaking my head in disappointment. Minutes later, as I ran for the bus, I met two other birders stepping out of their cars and heading down to have a proper look for yesterday's Pallas's.

"Nothing there," I assured them.

It wasn't until I was home from school that night that the same friend who'd rung me about the Pallas's' appearance was back on the phone. "Radde's Warbler," he said, "found by the two blokes who said they'd walked past you first thing this morning. They said it was in the first gully after the Lighthouse. You must have walked right past it!" 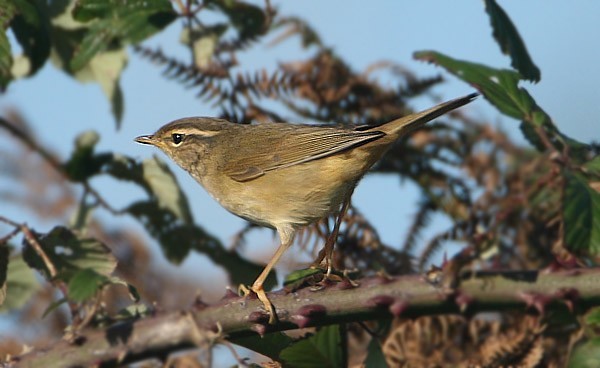 I didn't just walk right past it! I'm sure, even to this day, that it was the same bird I had dismissed as a Chiffchaff when still looking for stripes. I can almost still see the whopping big supercilium on the thing and the dark eye-stripe that made it sort of 'glare' back at me as it hopped on the ground. I'd never heard of Radde's Warbler until that moment, but it still cut me deep. The thought that birds that were supposed to be in central Russia or southeast Asia were turning up within short walking distance of my house was almost too mind-boggling to comprehend. I'm not sure I necessarily made a vow there and then that one day I would avenge the despair of missing that Radde's, for I was a fifteen-year-old still interested in cricket and football and girls and other things, but the more and more serious I became about my birding the more and more the memory of that bird came back to haunt me.