Has Red-tailed Hawks' migratory behaviour altered due to climate change?

'Citizen science' data from across its annual migration cycle has shown that the behaviour of Red-tailed Hawk in North America has undergone shifts that may be tied to climate change.

Bird species' distributions and migratory behaviour are shifting in response to changes in climate and land-use, but surveys that focus on a particular season can cause scientists to miss trends in the bigger picture. A new study from The Condor: Ornithological Applications tackles this problem by combining Red-tailed Hawk counts from both migration and winter and finds that, while the hawks' numbers are stable overall, their migratory behaviour is undergoing a change.

To get a more complete picture of the species' population status, Neil Paprocki of HawkWatch International and his colleagues compared data from the Raptor Population Index, which is based on counts of raptors during migration, with Christmas Bird Counts, which are carried out by amateur birdwatchers in December and January.

They found declining hawk numbers at 43 per cent of the migration count sites, with increases at only a few sites located in the western flyway. Among the winter counts, however, 67 per cent showed increases spread across all the regions surveyed. The greatest increases were reported from northern latitudes.

The migration data alone would suggest that Red-tailed Hawks are on the decline in North America, but the full picture actually indicates stable to increasing populations, with an ongoing shift in migratory behaviour. The hawks appear to be wintering farther north than they have in the past, explaining the lower numbers seen on migration. 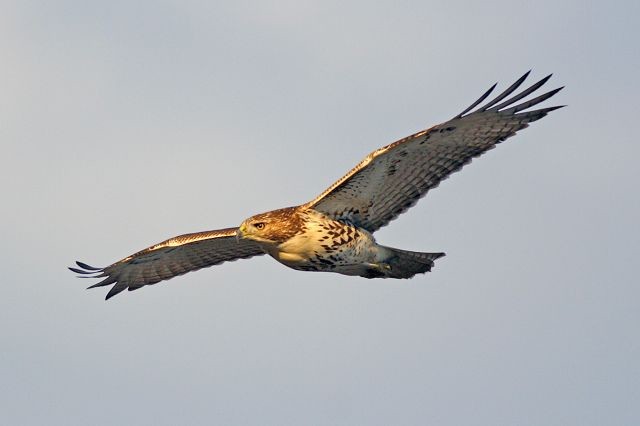 "We wanted to develop a more comprehensive view of raptor population change, using data from multiple stages of the annual cycle," said lead author Paprocki. "What does this study tell us about how Red-tailed Hawks are adapting to environmental change? It doesn't tell us anything directly, but the results suggest that Red-tailed Hawks may be responding to climate change, land-use change or other environmental changes by migrating shorter distances or becoming year-round residents."

Hawks breed at low densities, including at high latitudes where they can be difficult to survey. This makes migration and winter surveys especially important for monitoring these species.

"Many North American hawks, eagles and falcons are counted at watch sites during migration, and monitoring programs use counts as an index of population size. The interpretation that trends or lack thereof in count data are indicative of changes in populations assumes that the proportion of the population passing by the migration site remains consistent over time. Unfortunately, this assumption may be at risk, as there is strong evidence that raptor migration strategies are changing in response to climate and land-use change," commented Julie Heath of Boise State University, a raptor biologist who was not involved with the study.

"Paprocki et al do an excellent job highlighting how changes in annual cycles could affect our ability to monitor raptors and how the use of additional information can provide insight to trends in migration counts."