Keyhaven and Pennington Marshes are owned by the Hampshire Wildlife Trust and are situated between Hurst shingle spit in the west and Lymington River to the east. The reserve extends to over 2,000 acres and includes saltings, reedbeds, mudflats, shallow pools and lagoons, interspersed with marshy rough pasture, gorse scrub and muddy creeks and channels.

Due to the unique blend of habitats, the entire area is particularly fruitful for wildfowl, and during the winter months can hold most species of duck that are found regularly in the United Kingdom. Wigeon, Teal and Shelduck are particularly abundant, with smaller numbers of Pintail, Shoveler and Gadwall. These dabbling ducks frequent the small pools and lagoons that can be easily observed from the seawall. The waters off Keyhaven are sheltered by the Isle of Wight and usually hold a small flock of Eider and a few Long-tailed Ducks, and Common Scoters are occasional visitors. Colder snaps can bring Goosander and Smew, whilst Garganey are annual visitors during spring and autumn. Another feature of the region is the flock of Brent Geese that winter on the marshes. Since the 1960s they have increased in numbers to current estimates of around 2,000 individuals, and recently have included Black Brant. Other wildfowl can, and do, turn up in harsh weather, and recent examples are White-fronted Goose, Bean Goose, Bewick's Swan and Scaup. 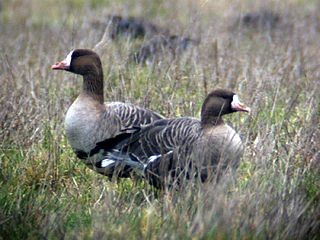 Divers, grebes and auks are more erratic visitors to the Solent, except for a few Great Crested Grebes that are regular between October and April. During these months Short-eared Owls reside over the marshes, with one or two usually present. The other typical winter raptors are less frequent visitors, wandering occasionally from the New Forest nearby.

Little Egrets began to increase in numbers here during the early 1990s and can now be found at Keyhaven throughout the year. A number of individuals winter on the marshes and are joined by visitors in the spring and autumn, whilst a few non-breeding adults summer.

Waders are conspicuous through the winter, with good numbers of Curlew, Redshank, Dunlin, Grey Plover, Oystercatcher, Ringed Plover, Golden Plover, Lapwing, and both Black-tailed and Bar-tailed Godwits, and smaller numbers of Greenshank, Ruff, Whimbrel, Spotted Redshank and Common Sandpiper. The numbers of waders and their variety expand in spring and autumn. The flocks of godwits and Whimbrel are swelled by passage migrants, along with new arrivals such as Little Ringed Plover Knot, Sanderling, Curlew Sandpiper, and Green, Wood and Common Sandpipers. Scarcer species such as Avocet and Little Stint are also annual but scarce. Oddities often turn up, and most recently included Britain's 30th Stilt Sandpiper which took up residence for over a week, and attracted a lot of attention. Other rarities have included Spoonbill, Killdeer, Temminck’s Stint, Buff-breasted Sandpiper, Kentish Plover, Red-necked Phalarope and Pectoral Sandpiper. Grey Phalaropes seem to be increasing over the years, and now almost annual, particularly after severe gales. 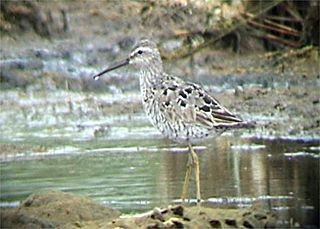 Sandwich, Little and Common Terns all breed on the reserve, and begin to arrive back in late March and early April. During passage, other tern species join them; Roseate Terns and Black Terns are regular in spring and autumn, feeding on the pools behind the seawall before migrating. A large colony of Black-headed Gulls also nest on the marsh, with the commoner species present all year too. Recently Mediterranean and Yellow-legged Gulls have increased in abundance, with individuals often lingering well into the winter months, commuting between the marshes and nearby refuse tips where they feed.

Although Keyhaven is renowned for its waterbirds, there is a small passage of passerines during the spring and autumn. Water Pipits and Yellow Wagtails are regular, along with Wheatear, Black Redstart and Pied Flycatcher. Reed Warblers, Sedge Warblers and Reed Buntings breed in small numbers.

Timing is quite important to get the better views of the wildfowl and waders: about an hour before and after high water is recommended as the birds feed closer inshore. During high tide the wader flocks roost on the marshes, and frequently use the fields inland, particularly if they are flooded. The Solent Way footpath follows the seawall and gives excellent views of the marshes, foreshore and the sea. The path can be picked up by parking at Keyhaven harbour, situated one mile east of the B3058 SZ306915 or at the alternative end at Pennington SZ318927. It's a comfortable, flat walk along the seawall, about 3-4 miles long, from Keyhaven harbour to Lower Pennington. To avoid having to return on the same route, it's possible to walk behind the marshes by following the rough track that stretches between Keyhaven harbour and Lower Pennington Lane.