A Cory's or Great Shearwater would be the highlight of any seawatch in Britain, as both species are scarce and unpredictable in their occurrences in our waters. While close birds are easy enough to identify and enjoy, it is those distant views most likely on a British seawatch which cause problems and lead to many sightings being logged simply as 'large shearwater sp'. 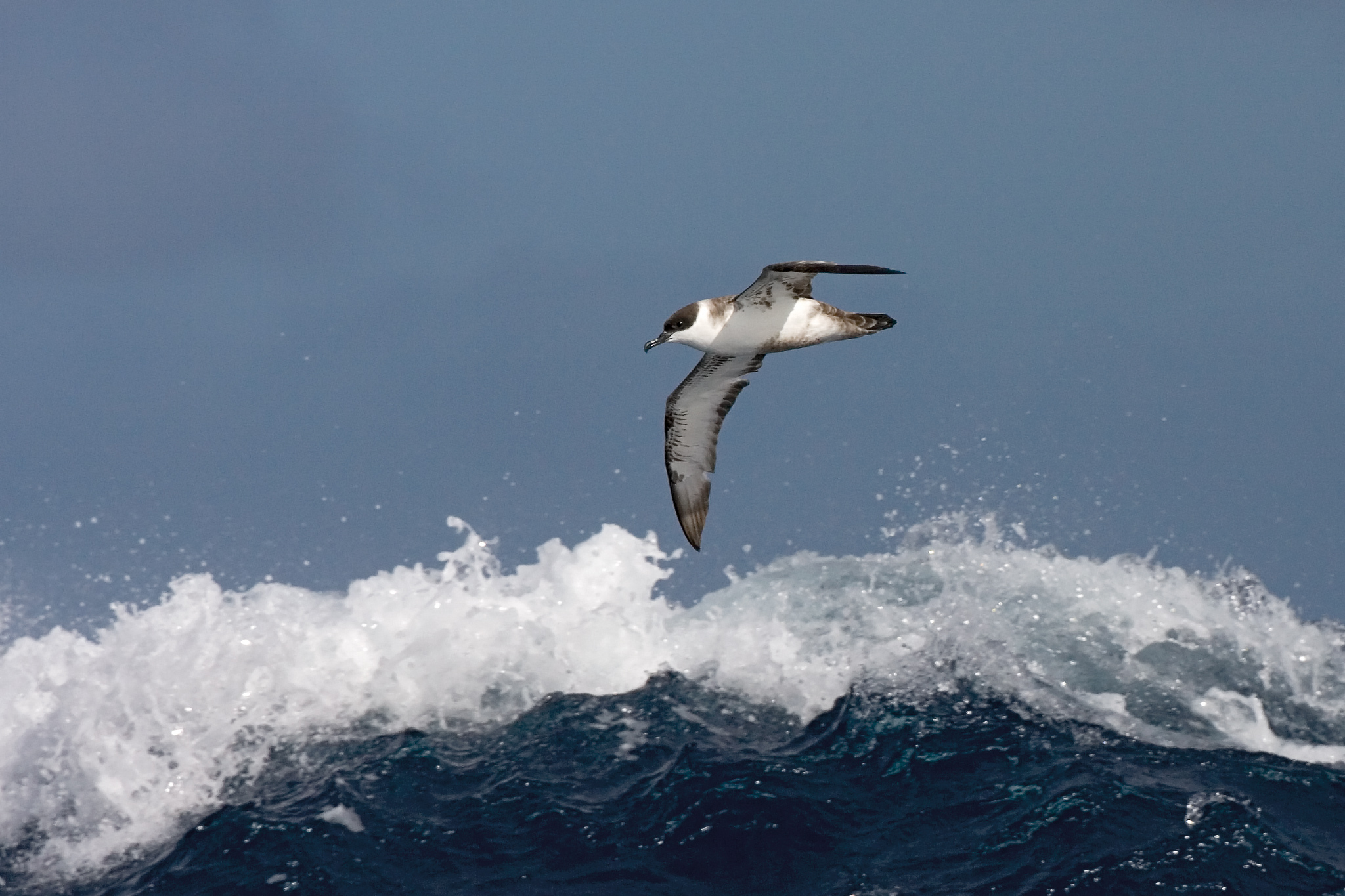 Great Shearwater (South Georgia Island, 22 March 2006). Great Shearwaters are attractive and distinctive when seen well. Note the slim, dark bill, striking blackish cap, white neck sides, brown smudging in the axillaries and underwing coverts and some faint smudging also on the undertail coverts. At range, however, it is the gleaming white neck sides that really stand out, particularly when, as here, they are illuminated by strong sunlight (Marc Guyt / www.agami.nl).

This species breeds on the Azores, Madeira and Canaries, with a few on the Portuguese Berlengas Islands. The largest colony is on Selvagem Grande in the Madeira archipelago. It disperses from these breeding sites from late summer onwards and it is at this time that most British sightings occur, involving birds displaced north from the Bay of Biscay. Cory's records here peak in August and September and it is rare outside this season.

Unsurprisingly, most records are in south-west England, where occasionally large movements can occur, although a small number is logged each year in the North Sea. It is very rare anywhere else although, uniquely, one was seen and photographed over central London in September 2016!

Seen well, Cory's Shearwater is rather bland, but nevertheless quite distinctive. The plumage is relatively plain mid-brown above, darker in the primaries, with faint even darker areas across the wing coverts forming a subtle 'M' pattern. The underbody and underwing coverts are bright white, with a neat dark trailing edge to the underwing and a solid dark underside to the wing-tip. The face and neck-sides are uniformly brown and a narrow crescent of white may be visible in the uppertail coverts. The bill is quite stout and yellow in colour.

Cory's is a large shearwater with very long wings generally held pressed forward at the carpals to produce a characteristic curved leading edge to the innerwing and 'swept back' primaries. The wing is typically held 'bowed'. The wing base and 'hand' are relatively broad, but it is the length of the wing which impresses and the species looks almost as though it has 'too much' wing . The shearing flight is relaxed, fluid and confident, rising and falling, with occasional bursts of fluid and elastic wing beats.

This species is, in contrast with Cory's Shearwater, one of the world's great migratory seabirds. Like Sooty Shearwater and Wilson's Storm Petrel, it breeds in the southern hemisphere, with almost all breding birds being found on the Tristan da Cunha group of islands in the South Atlantic.

It breeds in the austral summer and then performs a remarkable transequatorial loop migration, passing north off South America in April, reaching the waters off Canada and Greenland in the northern summer and then crossing the Atlantic to return south past Europe in September.

This passage normally takes place far out to sea, but weather systems can push birds closer inshore. On such occasions birds can be visible in south-west England, sometimes in very large numbers and sometimes also with displaced Cory's Shearwaters. Occasionally, a few birds also enter the North Sea.

Close up, Great Shearwater is attractive and distinctive, much more crisply marked than the rather bland Cory's. There is a striking blackish cap, a white 'collar', a dark 'shoulder mark' resembling that of Black Tern, grey-brown upperparts with paler feather tips giving a 'scaled' effect and a white crescent across the uppertail coverts.

The white underwing has a dark trailing edge and wing-tip, and is variably smudged brown in a diagonal bar across the underwing coverts. There is also a sometimes prominent dark smudge on the rear belly and the undertail coverts also appear sullied. The bill is also dark.

Again, these features largely disappear at range. Even the prominent dark cap may not be seen, but in sunshine the white neck-sides can 'gleam' strongly, contrasting sharply with the dark upperparts and giving an almost white-headed appearance. Any large shearwater showing this feature will not be a Cory's.

As with that species, however, structure and flight action are most important. Great Shearwater has a slimmer-based wing with a narrower, more tapering 'hand' and holds its wings straight out from the body. It also has a more rapid, stiff-winged, rather mechanical flight action, in this respect resembling much more closely a Sooty or Manx Shearwater. In contrast to the somewhat leisurely and meandering Cory's, Great Shearwater has a more purposeful demeanour.

The recent split of Cory's Shearwater has resulted in a 'new' species – Scopoli's Shearwater – being described. This taxon breeds in the Mediterranean but disperses into the Atlantic outside the mating season.

Its occurrence in Britain has been confirmed on one occasion (off Scilly on 2 August 2004), but its true status in British waters is not yet fully understood and it is probably safe to say that it is at present under-recorded; there have certainly been a few quite convincingly photographed putative birds since that first record.

It closely resembles Cory's Shearwater in structure and plumage, and any distant bird would be unidentifiable. A close bird may, however, reveal somewhat more slender proportions (including a finer bill) and most importantly a slightly different underwing pattern, with white extending onto the primary bases and therefore cutting into the dark wing-tip. 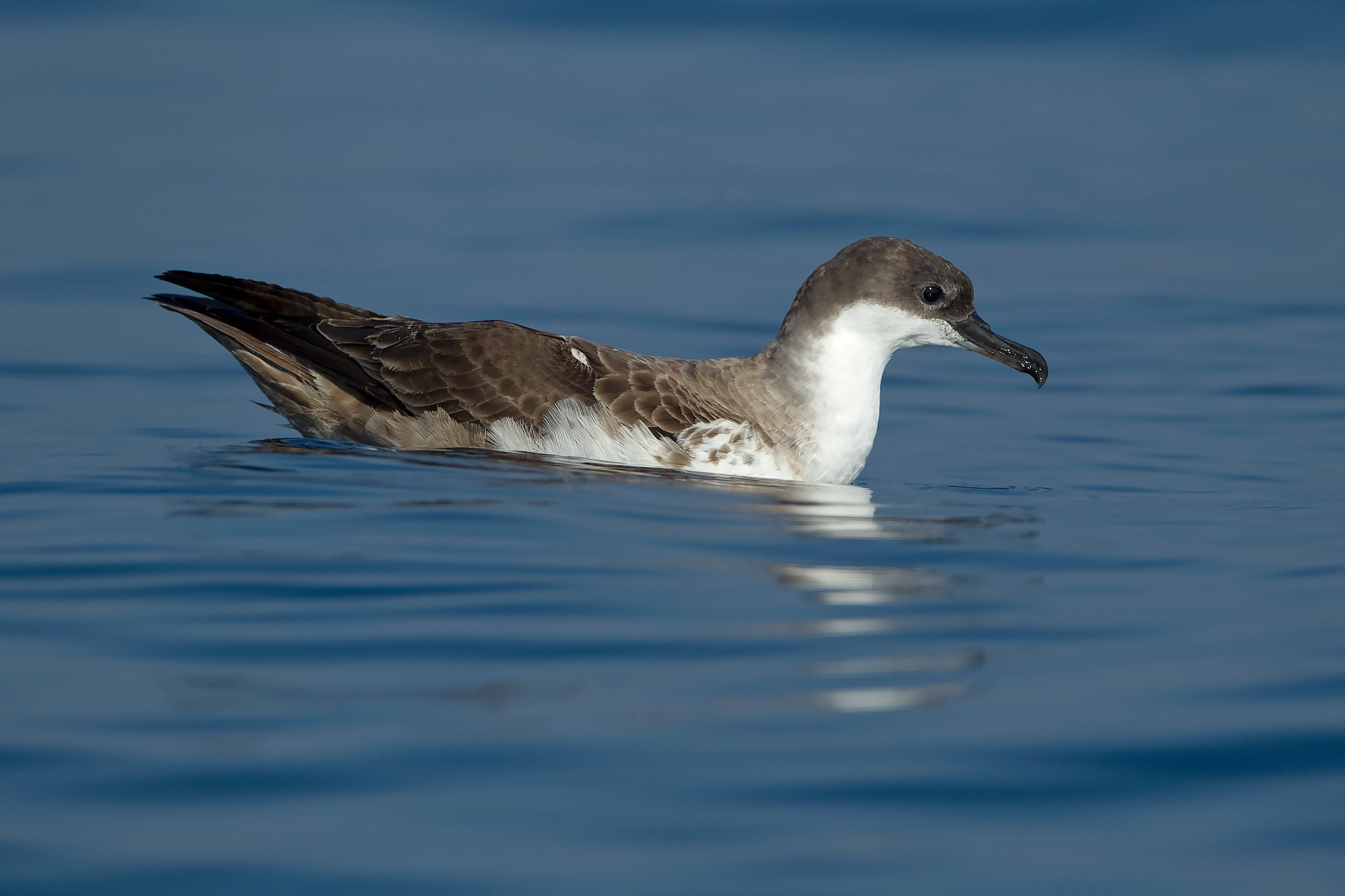 Great Shearwater (Algarve, Portugal, 4 October 2011). This close-up image shows to perfection the slim, dark bill and neat blackish cap of this species. Note also the delicate 'scaling' in the upperparts. Great Shearwaters are quite variably marked below and this bird shows quite extensive 'muddy' brown smudging across the vent and undertail coverts (Robin Chittenden / www.robinchittenden.co.uk). 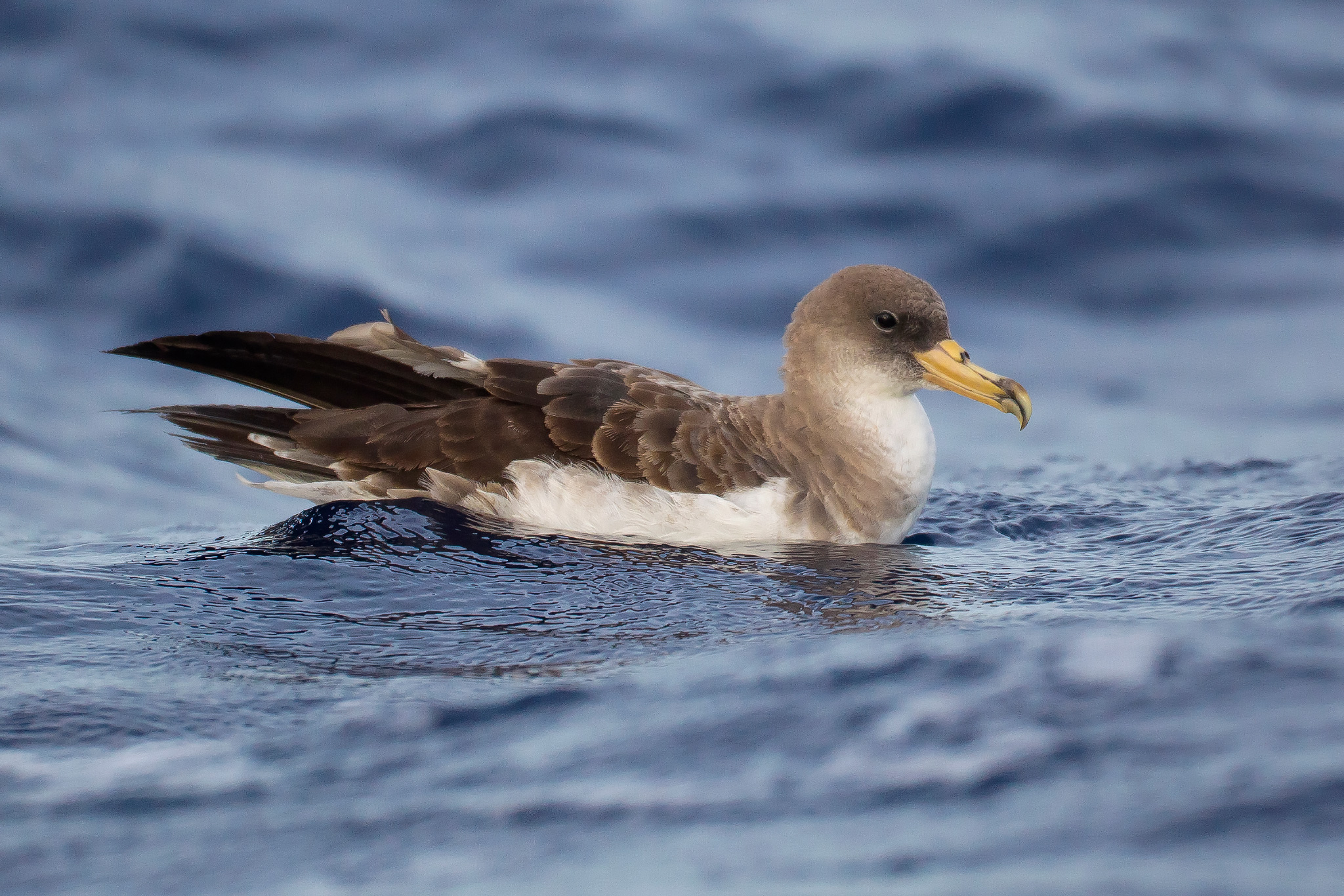 Cory's Shearwater (Corvo, Azores, 11 October 2011). On a similarly close view, this Cory's Shearwater looks very different, the most striking feature being the stout predominantly yellow bill. Note also the very different head pattern: diffusely washed in pale brown with no striking contrasts. The upperparts are 'scaled' and it is also possible to glimpse the whitish band across the uppertail coverts, just visible below the closed wing (Daniele Occhiato / www.agami.nl). 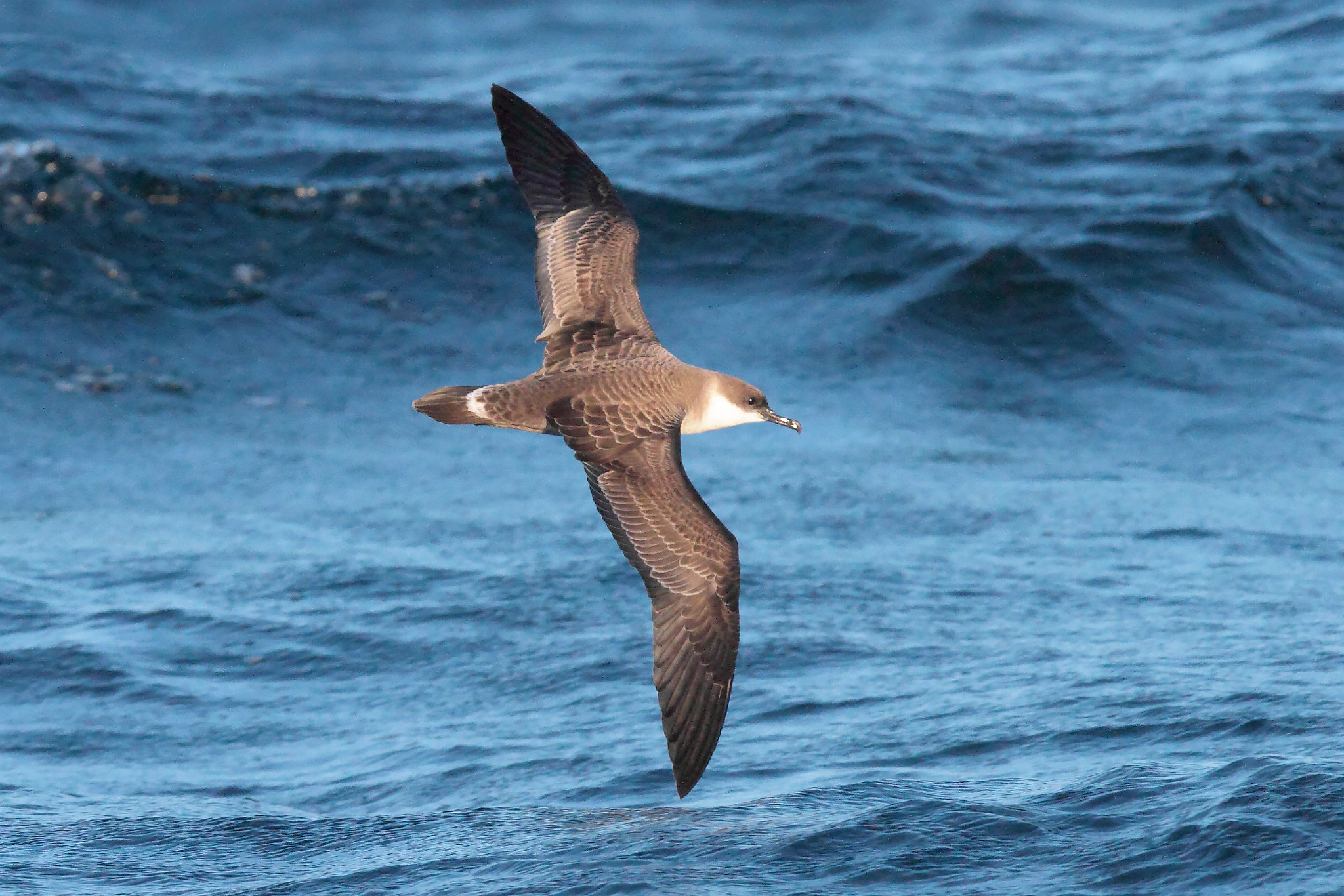 Great Shearwater (at sea off Scilly, 8 August 2014). The slim, dark bill and dark cap readily identify this bird as a Great Shearwater, but note also how the white neck sides once again catch the light – this would be the most obvious feature at long range. Structurally, this species resembles Manx and Sooty Shearwaters with its relatively narrow wing bases (Jim Almond). 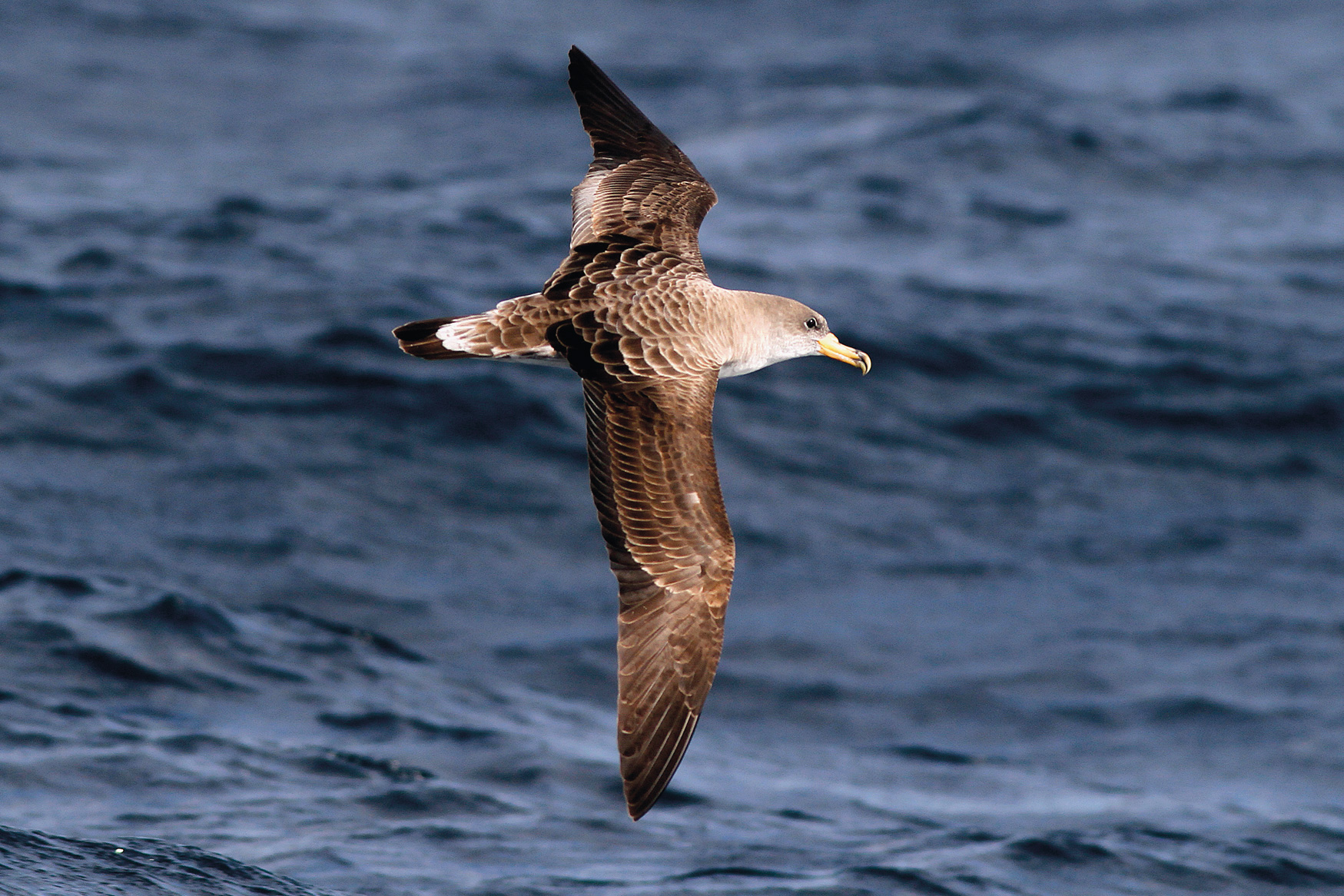 Cory's Shearwater (at sea off Scilly, 28 July 2014). This bird's stout yellow bill and softly brown-washed head readily identify it as a Cory's Shearwater. Note how the lack of contrasts about the head never result in the prominent white neck sides that can be so obvious on Great Shearwater. The wings are also rather broad based compared with Great Shearwater, while the upperpart 'scaling' and whitish band across the uppertail coverts are shared with that species (Joe Pender). 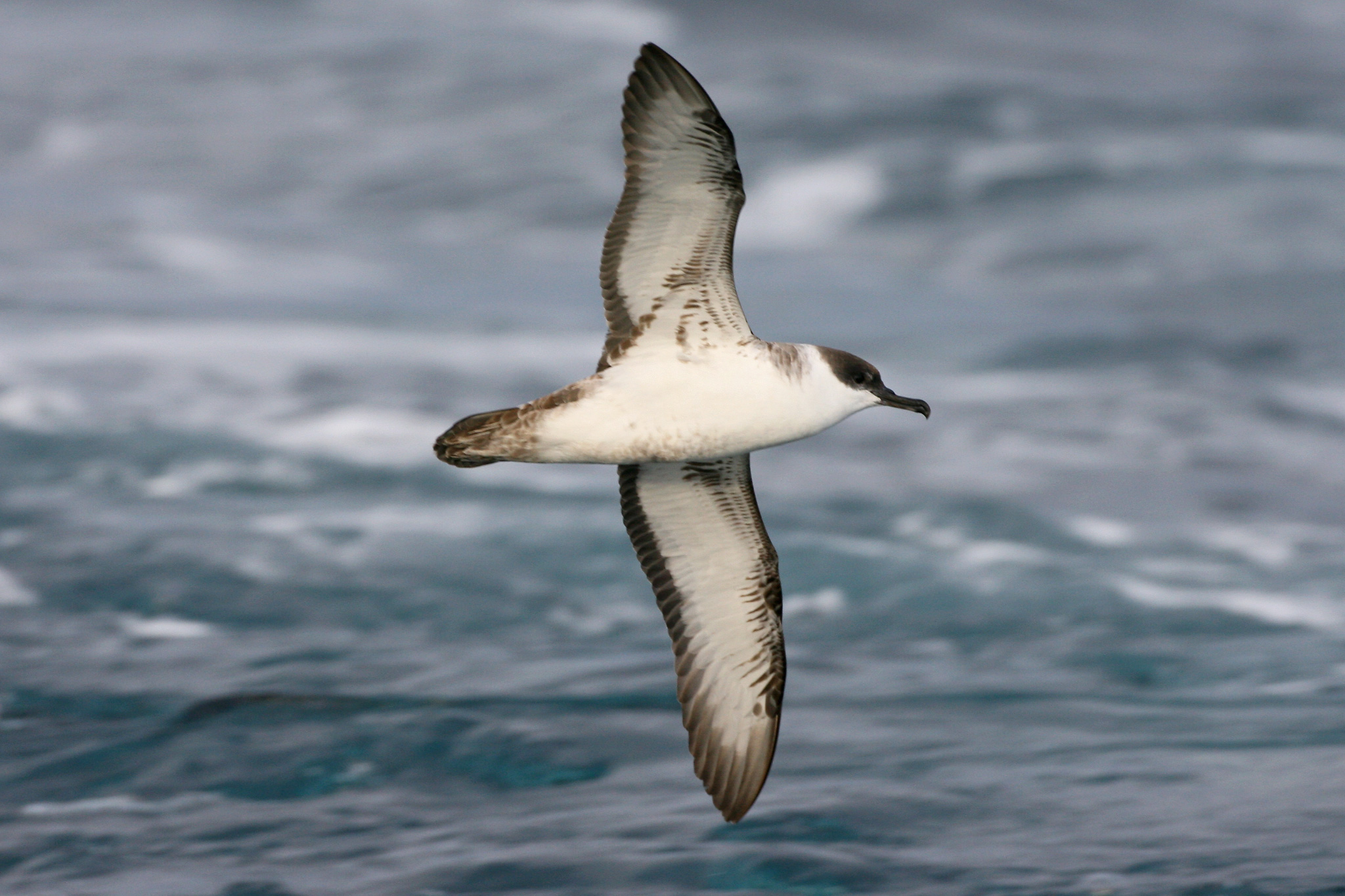 Great Shearwater (Gough Island, Tristan da Cunha, 25 March 2006). The slim, dark bill, dark cap and white neck sides clinch this bird as a Great Shearwater, but such a close view provides a good opportunity to study the underparts and underwings. The brown marks in the axillaries and underwing coverts can be seen clearly here, the latter forming a thin diagonal dark line across the underwing. This bird is barely marked on the belly – some are much more heavily smudged here – but the brown wash across the undertail coverts can be seen clearly (Marc Guyt / www.agami.nl). 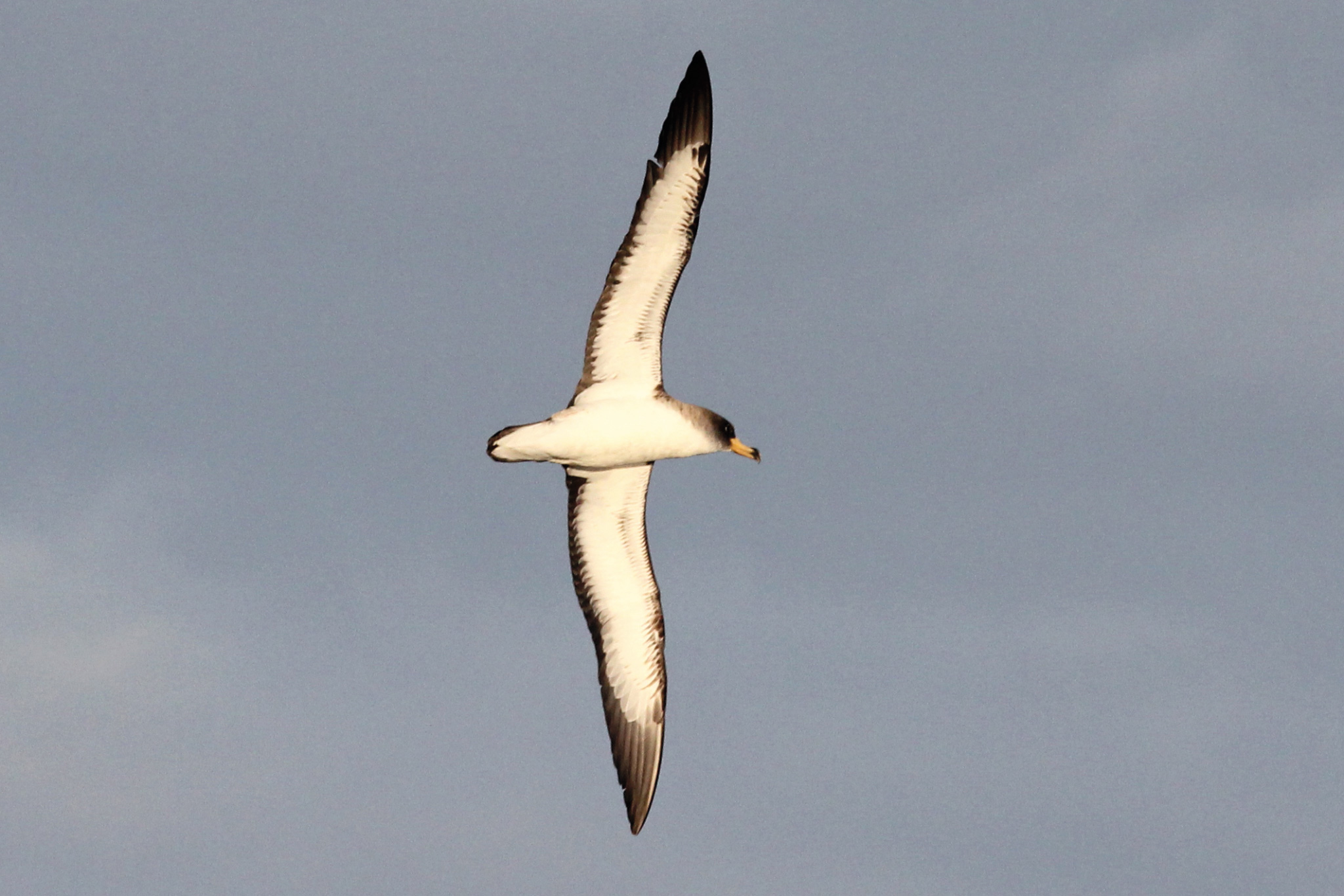 Cory's Shearwater (at sea off Scilly, 8 August 2014). The stout yellow bill and pale brown-washed head are suficient to identify this as a Cory's Shearwater, but the underparts and underwings can also be seen clearly. Note the clean white axillaries and underwing coverts – unlike most Great Shearwaters – and the fully white belly, vent and undertail coverts (Simon Slade). 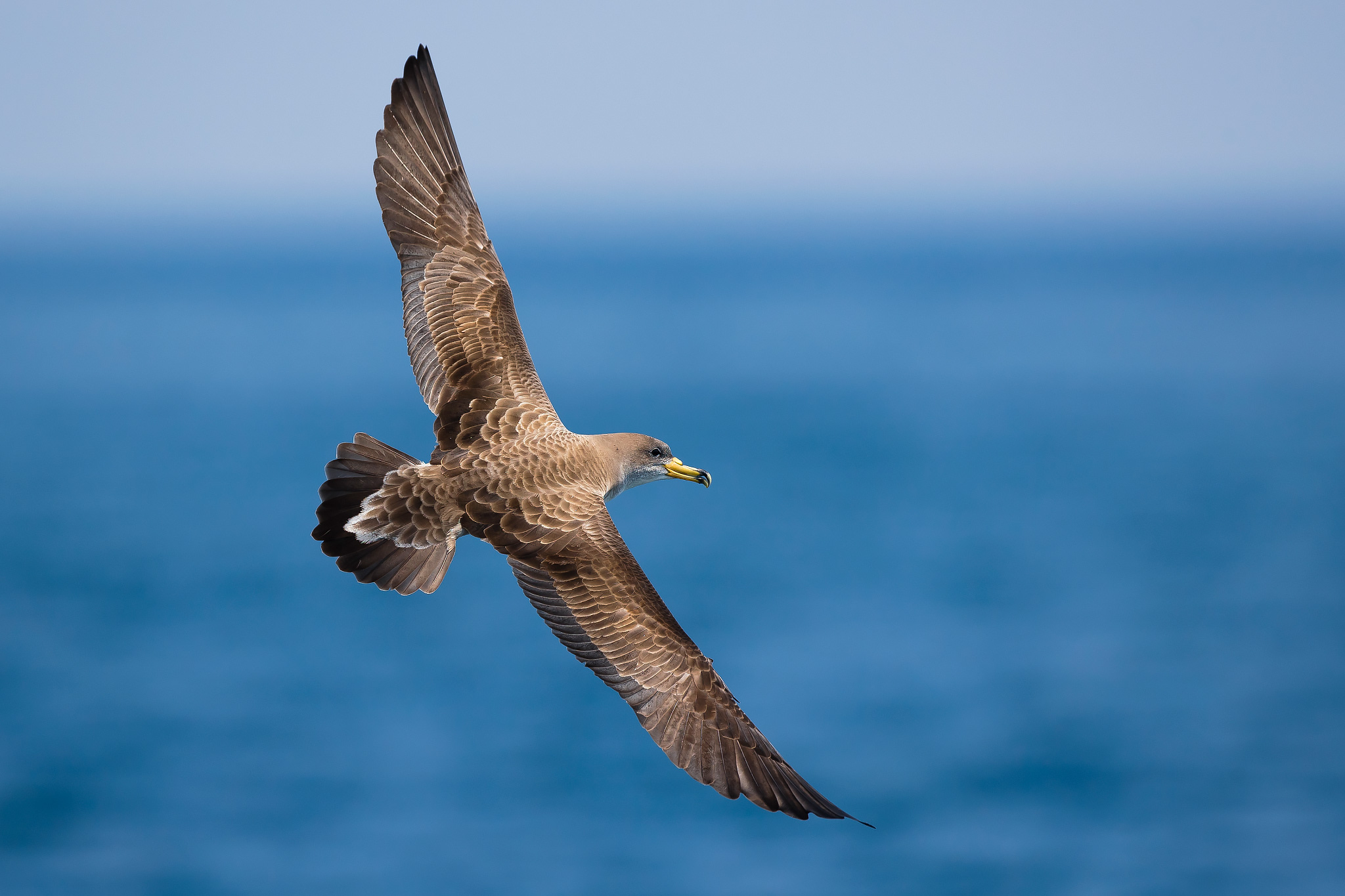 Scopoli's Shearwater (Tuscany, Italy, 14 June 2014). This bird is clearly a Cory's-type shearwater: note the yellow bill and brown-washed head. On such a good view it is possible to see that the bill looks perhaps a little slender, but – apart from the location – there are no visible clues here that this is actually a Scopoli's Shearwater. To clinch its identity it would be necessary to get a good view of the underwing (Daniele Occhiato / www.agami.nl). 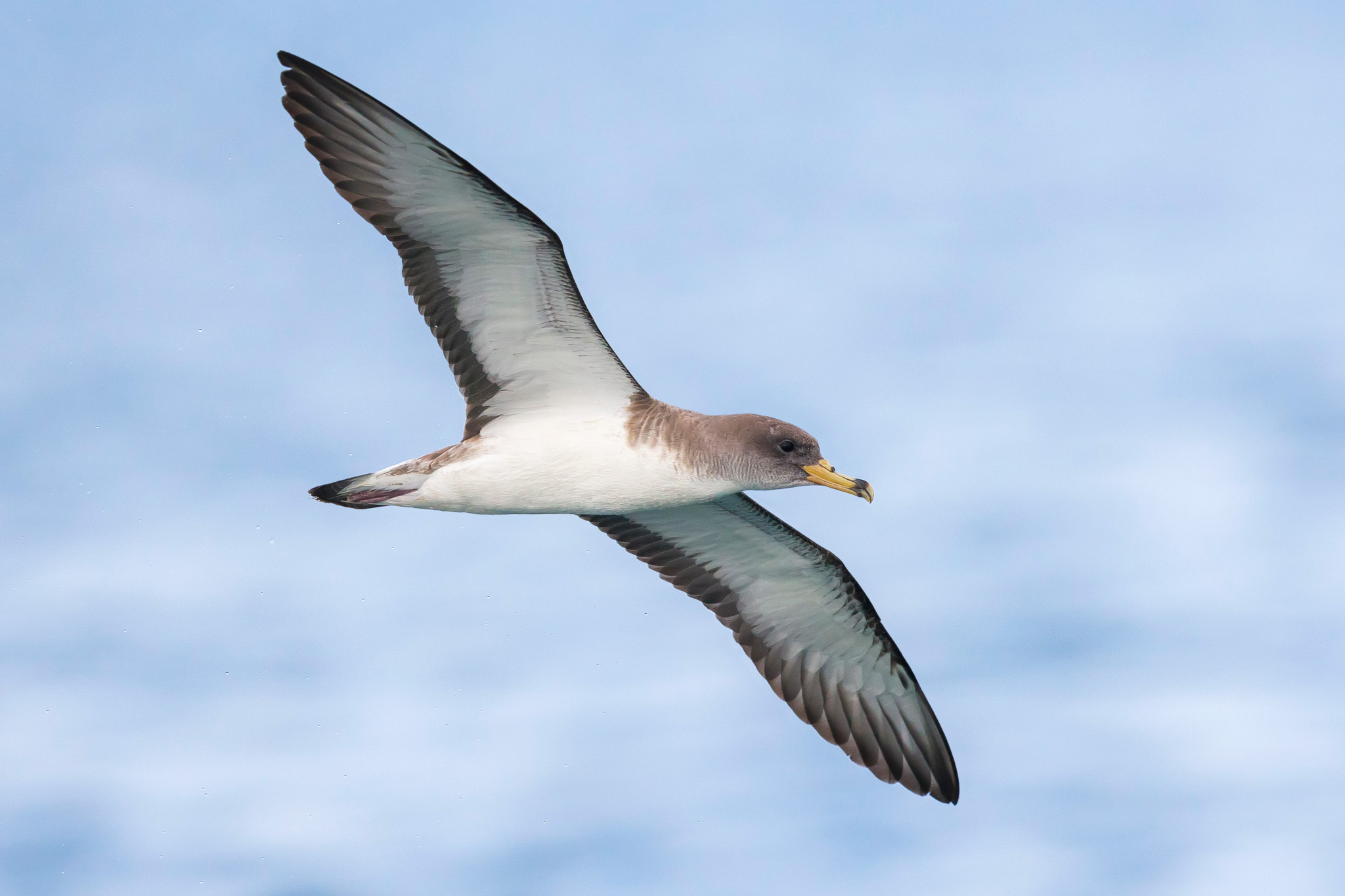 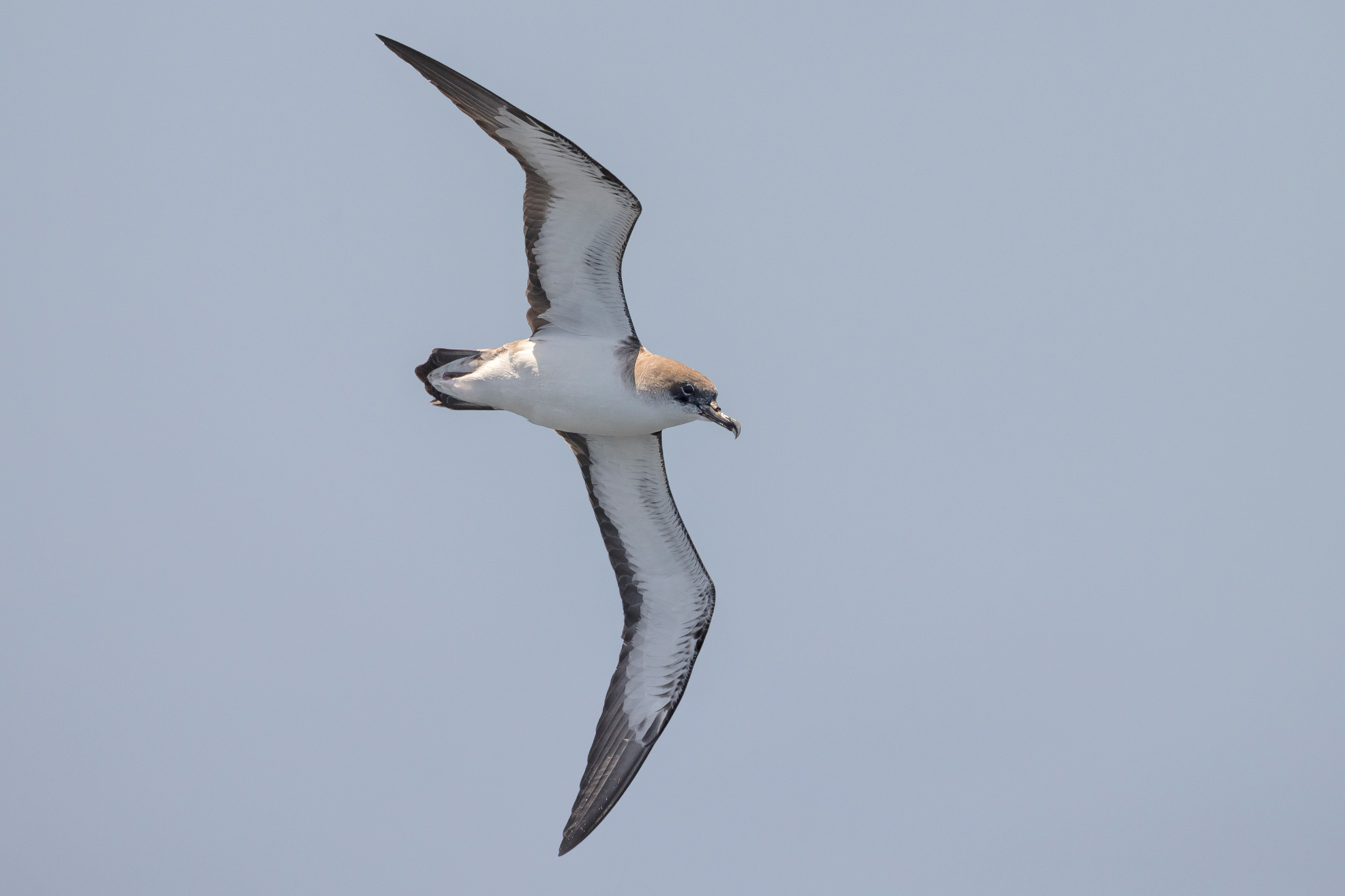 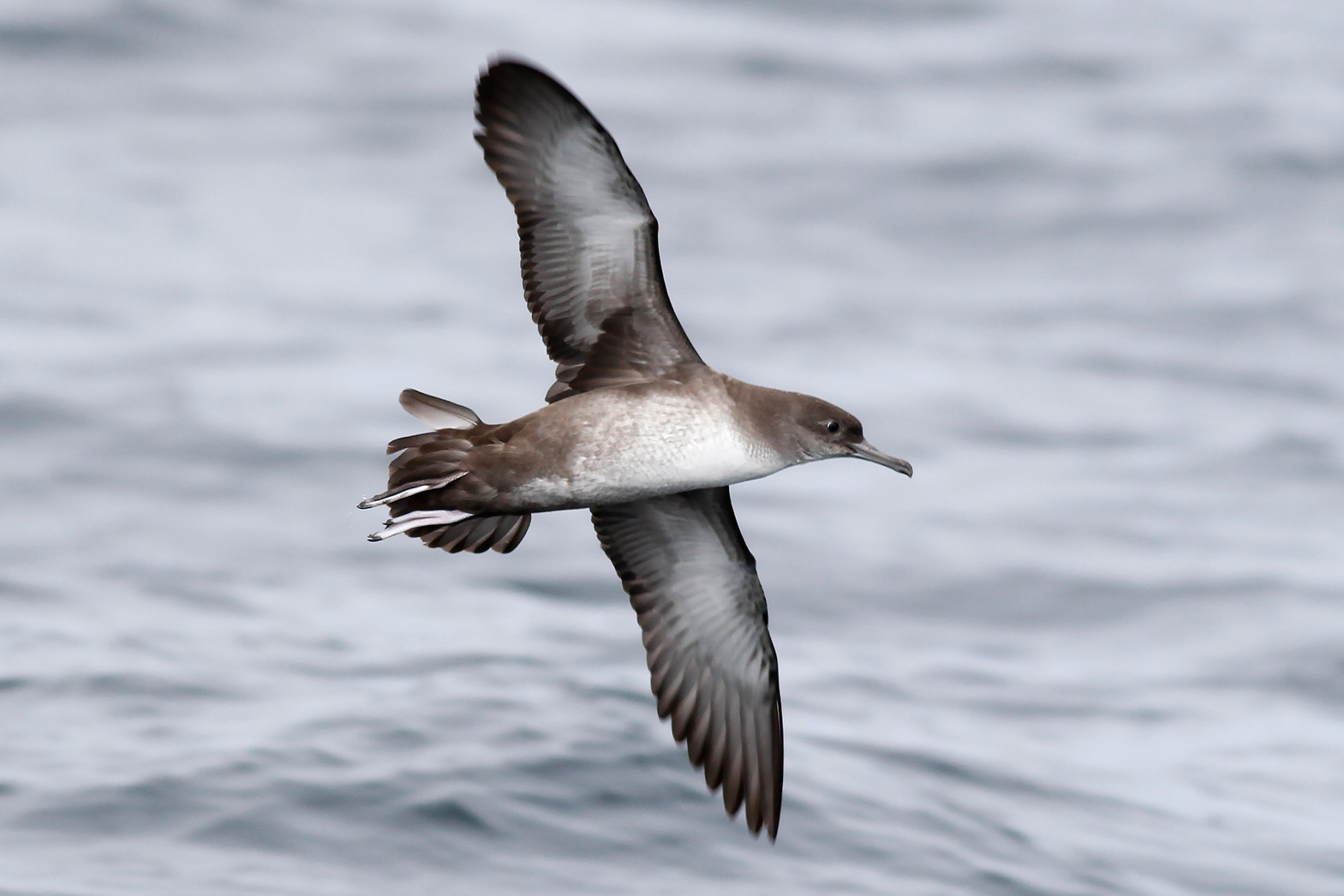 Balearic Shearwater (at sea off Scilly, 28 July 2010). Beware that not all brown-looking shearwaters are large shearwaters. This bird shows prominent brown hues around the head, but the resemblance to Cory's Shearwater is otherwise minimal. The combination of its (in life) small size, dark bill and very extensively dark brown-smudged underparts and underwings should readily identify it as a Balearic Shearwater (Joe Pender).