At a time when populations of many trans-Saharan migrants are declining, learning more about their stopover sites on migration is vital to their conservation. Studying the clues given by their migration strategy can shed light on where birds might be stopping on their way south. One such clue is gained by observing the amount of fat a bird accumulates before it starts the next leg of its migration. A recent paper by Wetland Trust and the BTO, using ringing data for Grasshopper Warblers in Portugal, has shown that, unlike in some trans-Saharan migrants, very few individuals of this species accumulate sufficient fat reserves to make it south of the Sahara without at least one more refuelling stop. Thus, currently unknown sites in north Africa appears to be of strategic importance to migrating Grasshopper Warblers in spring.

The paper also looks at the return migration of Grasshopper Warblers in spring. Compared to autumn birds in Portugal, spring birds in Senegal were relatively slower in fuelling up for their northbound flight, probably because of the constraints of food availability during the Saharan dry season. Grasshopper Warblers began to leave Senegal as early as mid-January and are thought to spend up to two months in north Africa before continuing their journey north to the breeding grounds. 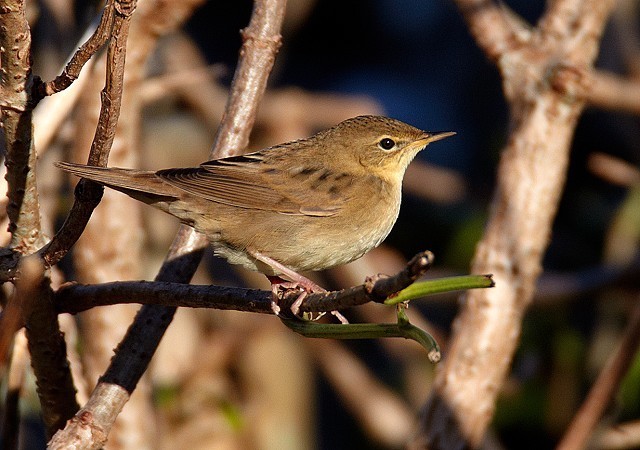 It's perhaps not too surprising that little is known about Grasshopper Warbler migration. Records in spring are widespread and common, with migrant males proclaiming their presence with their distinctive reeling song; but autumn records are decidedly scarcer with birds skulking in dense undergrowth and seldom making their presence known. One of the most accurate ways of surveying Grasshopper Warbler numbers in autumn is through ringing, and nowhere in the UK is this more productive than at Titchfield Haven NNR (Hants). Trevor Codlin has this year ringed a remarkable 950 Grasshopper Warblers at Titchfield Haven. More than half of those were ringed in autumn: proof that many Grasshopper Warblers go undetected each autumn.