We're off. My partner, Liz and I have bought a camper van so we can travel non-stop through Spain, Portugal and Morocco for three months. The aim is threefold: to gather footage for BirdGuides, to update my Finding Birds in... books by revisiting and checking all the sites and discovering some more, and to create a new series of DVDs to supplement the books, adding scenery, sounds and, of course, footage of the birds to the maps and descriptions in the books. 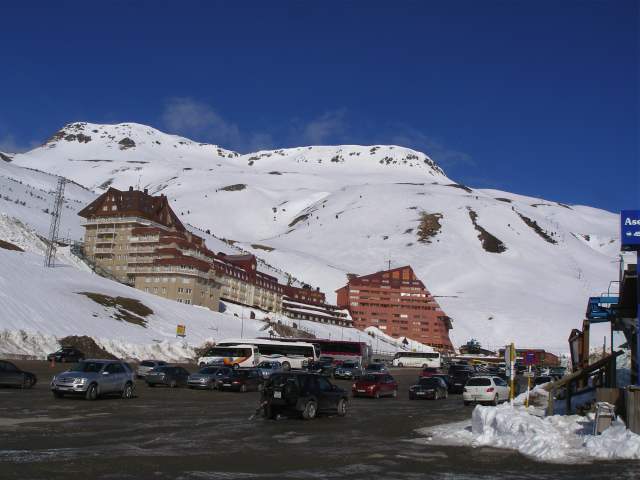 Astún car park: ignore the beautiful mountains — the Alpine Accentors will be under the wheels of the cars (Photo: Liz Hall)

Drive from Bilbao to the ski village of Astún, close to the French border, north of Jaca. It's already the 9th of March so we know we may be too late for our target bird but Snowfinches do sometimes linger around the car parks until mid-March. Not this year, however. But our drive into the mountains wasn't entirely wasted. A sweet, soft chirruping song told me there must be an Alpine Accentor around but I couldn't find it. Then I realised it was singing, not from the distant snowy slope, but from underneath the parked car next to me. You don't have to look high and low for Alpine Accentors. You just have to look low. The abundance of skiers and the harshness of the environment meant there were few other birds to enjoy, apart from some rather flighty Alpine Choughs. We drove after dark to the welcome of the Hostería de Guara in Bierge in the Sierra de Guara.

We were lucky enough to have local birdwatcher Nuria Graso Sancho to show us her local patch around Alquézar. I already knew some of the sites in that area, so she introduced me to a new one: the Mirador del Rio Vero. We arrived as another birding party was leaving; they'd seen about 10 species of raptors so it sounded promising. Over the next hour or so we had many of the same raptors and filmed some of them such as Griffon and Egyptian Vultures but our main target species, the magnificent Lammergeier, failed to show. The best bird we had there was probably the first we saw; as we arrived at the viewpoint we flushed a bird which disappeared around the first rock face. I put binoculars on it before it was lost and was amazed to find it had mainly crimson wings: a Wallcreeper. We moved on to another site where Lammergeiers were likely but again had to be content with commoner raptors including migrating Black Kites and freshly arrived Short-toed Eagles. Our next stop was at the vulture feeding station close to Alquézar but that was just to show us that the vultures haven't been fed there since October. Apparently the local abattoirs had been dumping all their waste there and it had been too much for the vultures to process. In a short time, a stinking pile of dead animal bits had accumulated and the smell was so bad it was reaching the village a kilometre away. So, a new feeding regime was being agreed upon but hadn't yet been implemented. Hence, on our visit, there was no food and no birds. Maybe soon it will return to its former glory when it attracted dozens of Griffons, up to 200 Red Kites and over 30 Egyptian Vultures. Our last port of call was the town of Alquézar itself. Nuria assured us that a Wallcreeper was still being seen daily on the cliff that faces the town. We scanned but saw nothing. 'Don't worry, it's usually there in the hour before dusk', Nuria assured us. So we walked around and came across another Alpine Accentor which was so reluctant to leave the path we almost trod on it. By the time we returned to the 'Wallcreeper cliff' the bird was showing nicely if rather distantly. While Liz and Nuria feasted on views of one of Europe's most special birds, I was tormented by the challenge of trying to find such a dot in the viewfinder of the camera. Every time it moved I had the same challenge again. Eventually I got plenty of shots — not exactly full-frame but showing plenty of typical activity, flicking those wings to show off their purple patches. Well done, Nuria. 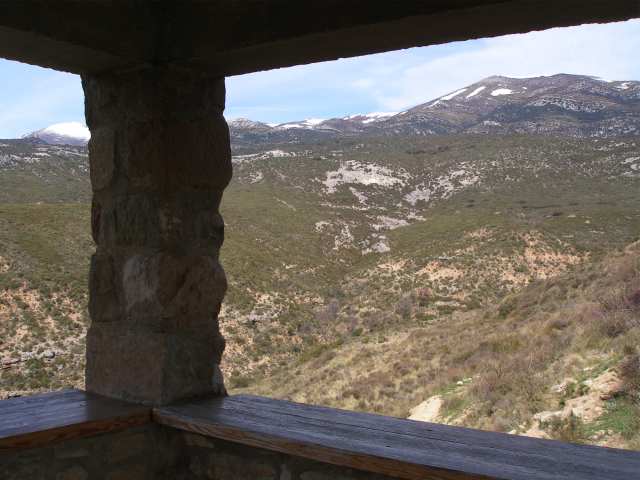 Santa Cilia: the view from the observation shelter. The grey patch in the middle distance is where the food is put out for vultures, including Lammergeier (Photo: Liz Hall)

We made another attempt to see Lammergeiers, this time at the feeding station at Santa Cilia. Once again there was no sign that birds had been fed recently but there was a regular patrol of raptors floating over, checking the site out. Amongst the usual sprinkle of kites, Griffons and Egyptian Vultures we saw a Golden Eagle and maybe two different Lammergeiers, all from the observation shelter by the village.

An early morning alarm call had us up before sunrise on the plains to the south of Zaragoza. I've heard that my favourite site for Dupont's Larks (as featured in Birding in Spain) is now out of bounds to birdwatchers, so I was exploring the more famous site at El Planerón, near Belchite. In the dim light it wasn't difficult to locate the song of Dupont's Lark but seeing the birds themselves was another matter. No matter where I stood, there always seemed to be one about 50 metres in front of me. By the time the sun appeared I hadn't been able to locate any of these elusive songsters and the singing had become much more infrequent. It was a pleasure to be on the plains again, listening to the calls of Stone Curlew, Black-bellied Sandgrouse and many other larks as well as the Dupont's. But the Dupont's lived up to their reputation of being one of the hardest birds to see. Maybe I'll call back here and try again on my return journey in June. 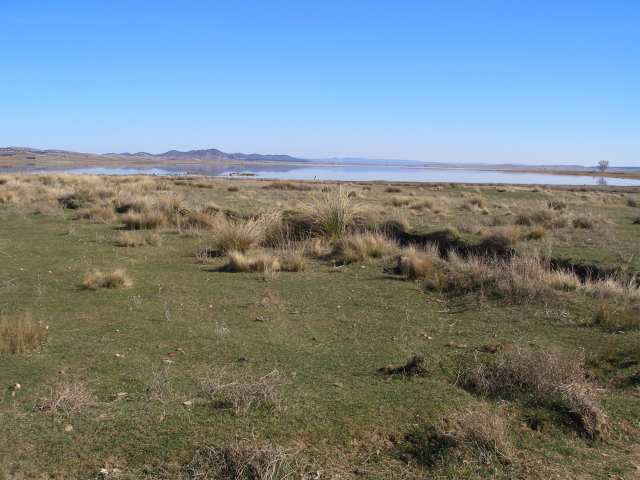 Gallocanta: 'you should have been here yesterday' (Photo: Liz Hall)

Our next destination was the vast inland lake of Gallocanta. I knew there was a chance we could be too late to see the most spectacular bird of the lake but my hopes were raised when, about 20km from Gallocanta, we saw a distant flock of flying Common Cranes — maybe 150 birds. They were obviously still in the area. However, when we arrived at the lake itself we could find only four Cranes and when we asked at the information centre we were told that the last of the passage birds had departed that morning! Two weeks earlier there had been over 40,000 Cranes around the lake. So, make a note of that: the cranes arrive in late September, reach 20,000 by November and peak at over 40,000 at the end of February. This year, they had all gone by 12th March. We searched in vain for two other species there too but we were probably too early for Little Bustard and apparently even the local guides struggle to find Great Bustards in the spring. Late summer and autumn is a better bet. And if you want both cranes AND bustards then the end of October is the best compromise.

A day spent travelling and trying to fix problems with the camper van. You don't want to know!

A day spent travelling and trying to fix problems with the camper van. You still don't want to know! 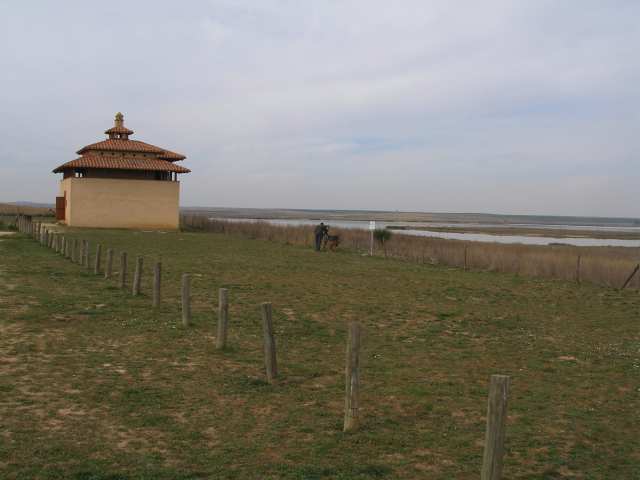 I'd never been to Villafáfila before. In fact until recently I'd never heard of it. But it's a site of major importance because at times it supports no less than 10% of the world's Great Bustards. Up to 2000 bustards have been counted on the reserve itself. Crikey — in most places you'd be lucky to see even a dozen. We awoke in a roadside lay-by and looked out to see a distant flock of about 50 Great Bustard. Scanning in a different direction we saw another 50. They were pretty much everywhere; the largest flock we saw was over 80 birds. I have been writing to local birdwatchers since early January, telling them of my plans to film in this area but just a few weeks before my departure I was told I needed special permission to film (any) birds at Villafáfila. I wrote for this permission, in my best Spanish, but the permit didn't arrive before I set off from the UK. Hence I was able to drive around any of the tracks in the area and get as close to the bustards as I wanted; I could look at them through binoculars or a telescope but if I looked through a camera I was committing an offence. I asked at the information centre and was given one window of opportunity: apparently it was acceptable to film from the public observation points. In this way I did manage to get shots of two of the special birds of the area: some Greylag Geese which winter here in their thousands, and some Lesser Kestrels which had only just arrived on their breeding grounds. However, the Great Bustards were always just too far from the public sites to be worth filming.

A major success. When we awoke after sleeping overnight at one of the public observation points we opened the curtains to the sight of a group of Great Bustards pretty close to us. Using the van as a hide I was able to film several of these birds, some of which were fluffing up their feathers until they looked like snowballs that might roll down the hill.

Later we would set off towards Extremadura, still with van problems but those would have to be fixed another day, as today is a Sunday.