Greenland White-fronted Geese make a 600-mile round trip each year to overwinter in Scotland but not every bird finds it easy, according to new research from Wildfowl and Wetlands Trust (WWT).

Specially designed bird ‘fitness trackers’ have revealed what happens to the birds as they struggle over the sea for long distances, trying to navigate the angry North Atlantic and getting blown off course by unpredictable storms.

Migration is a particularly vulnerable time for Greenland White-fronts. One goose took just 14 and a half hours to fly from Iceland to Greenland, but two others took days to complete the same journey, being forced to spend a lot of the time bobbing on the sea. 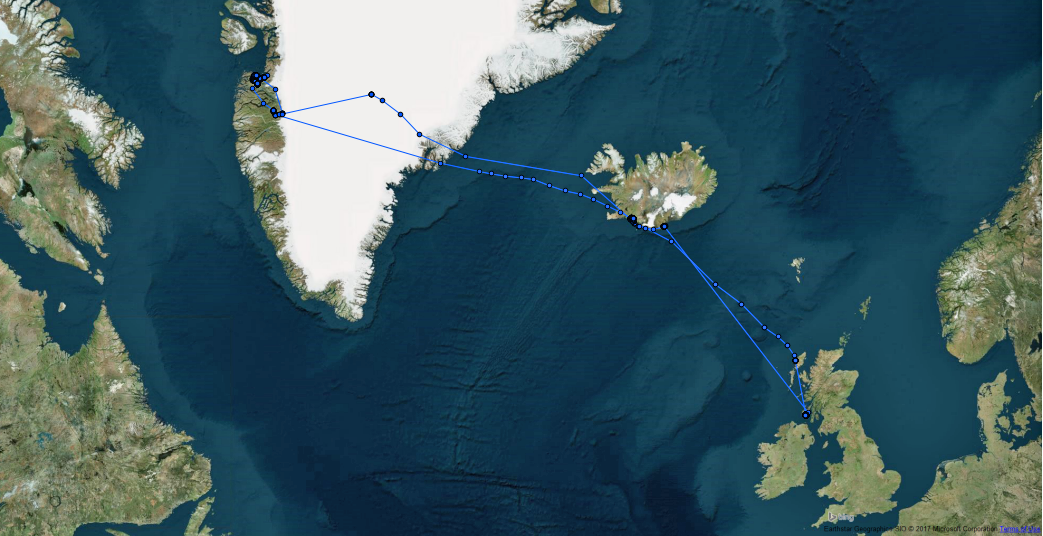 The complete migration routes of Greenland White-fronted Geese in spring, as monitored by the WWT (WWT).

WWT researcher Ed Burrell has just returned from the tiny island of Islay, Argyll, where he’s been downloading data from the bird fitness trackers. He said: “We’ve just downloaded all this amazing data from these individual birds to see what they’ve been up to. From studying the leg from Iceland to Greenland in May this year, we see what a difference a day makes.

“We can tell that the weather turned on two birds who left the same evening, as they landed on the sea – so they wouldn’t be blown further, of course. By using an extra gadget called an accelerometer – a bird 'fitness tracker' so to speak – which measures the movement of the tag, we can tell that they bobbed about for a bit. To avoid the terrible conditions, the birds went for a swim.”

The blue-tagged goose left Iceland at 3.30 am on 6 May in calm conditions, arriving in Greenland 14-and-a-half hours later at a speed of 33.5 mph. The green-tagged goose left at 4 pm on 3 May accompanied by a good tailwind that later turned on the bird, blowing it towards the Arctic Ocean and forcing it to hunker down in the sea. It later landed in Greenland 53 hours after its journey began.

The red-tagged goose had it even worse, leaving the same evening as Green, but taking a traumatic 63 hours to complete the trip.

Researchers at WWT have been tracking these birds to find out why they are declining so rapidly. Since the turn of the century, 50 per cent of the population has vanished.

Thanks to support from players of People’s Postcode Lottery, Ian Macleod Distillers Ltd and other generous funders, WWT is able to carry out pioneering research using the finest technologies available to try and prevent further loss of these magnificent birds.

White-fronted Goose is one of eight wetland species of birds threatened with extirpation in Britain. Numbers have declined from 35,000 in 1999 to 18,900 in 2016 due to a number of threats at their breeding grounds. People keen to support our drive to save this species can donate here.