8173cc99-6b97-46de-ab89-43f365e6cb10
During the last few decades, the population of British House Sparrows has declined by roughly half, causing great alarm among both scientists and the general public. However, the latest data from the British Trust for Ornithology's (BTO) Garden BirdWatch, suggests that the decline is levelling off in our gardens.

The decline of the House Sparrow has been dramatic, falling from around 12 million British pairs in the 1970s to between six and seven million pairs currently, with a greater reduction in population size in urban and rural areas, than in suburban ones. Given that gardens are thought to be a particularly valuable habitat for our House Sparrows, it is encouraging that the latest BTO Garden BirdWatch data indicate that numbers are stabilizing, which is also reflected in data from the wider countryside. 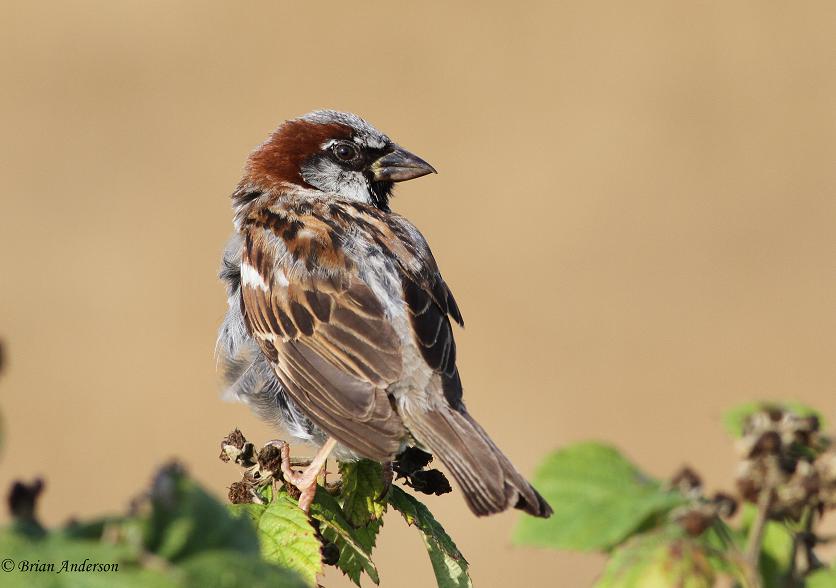 Perhaps the future is brighter for British House Sparrows after all? (Photo: Brian Anderson)

The reasons behind the decline very much depend on population location, as House Sparrows are fairly sedentary birds. Populations across Britain were affected by loss of nesting sites and food sources, especially the lack of invertebrates to feed their young. However, in rural areas, changes in farming practices are thought to have had a large effect but in urban and suburban populations causes were more complex and may have included increased competition with other birds and increased pesticide use in gardens.

Clare Simm, from the BTO Garden Ecology Team, said: "This complexity is also reflected in the factors that are driving the change in this delightful bird's fortunes. We are a nation of wildlife lovers and more people are now managing their gardens for wildlife, which will be benefitting our House Sparrows. There is also a greater awareness of clean feeding stations and in reducing garden pesticide use. The combination of these factors could be helping the House Sparrow to maintain its population."

This news does not necessarily mean that House Sparrows are out of danger, as the turning point has only occurred in the last few years. Clare Simm has recommended five simple things that anyone can do in their gardens to encourage House Sparrows:

You can find out more about the Garden BirdWatch on the BTO website.