Ever heard of Khijadiya Bird Sanctuary? I hadn't, so when I received an email inviting applications to attend the inaugural Global Bird Watchers' Conference in Jamnagar, Gujarat, focusing on migratory birds visiting Khijadiya, I was intrigued. Reading the small print the phrase "all accommodation and travel expenses covered, including international flights" turned intrigue to disbelief. Too good to be true in the age of email scams, I hear you say? It was therefore with a degree of trepidation that I submitted the application form (not including credit card details!) but my fears were unfounded; a few weeks later an e-ticket landed in my Inbox. 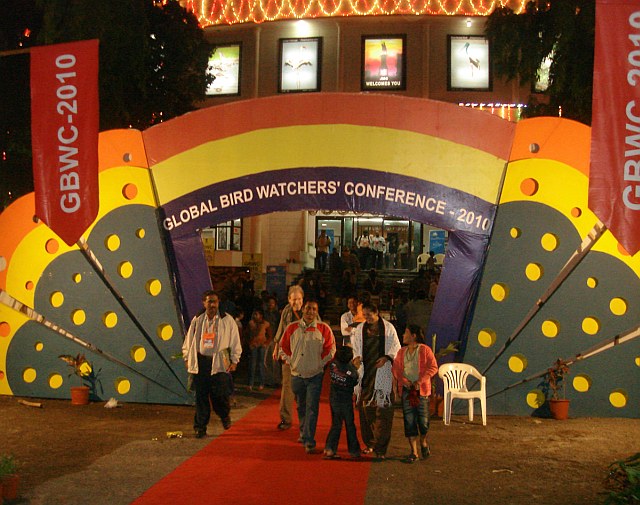 Jamnagar town hall, the conference venue, was decked out with everything from a red carpet to numerous three-metre-high bird photographs on the outer walls, and the media frenzy surrounding the 100 overseas delegates and 400 local attendees on the first morning had to be seen to be believed. A range of Indian and foreign speakers presented on the topic of bird migration on 25th November. My 'role' representing BTO and OSME at the conference wasn't exactly taxing; it seemed to simply involve listening to some very interesting talks, wandering round the eye-catching displays about the wildlife and reserves of Gujarat, and 'networking'! 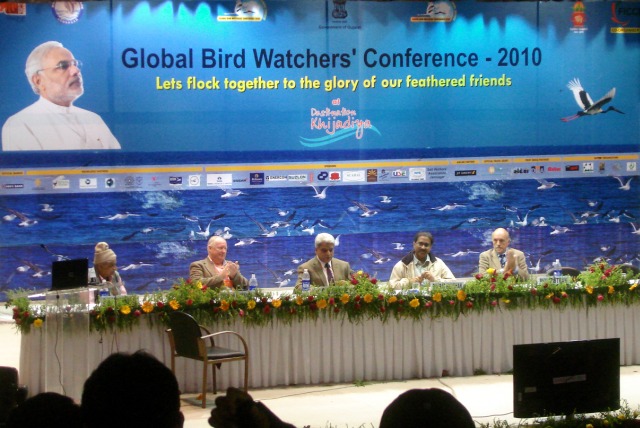 Flocking together to the glory of our feathered friends (photo: Nick Moran).

On Day Two the focus switched to ecotourism; specifically how the state of Gujarat could learn from the likes of South Africa and Malaysia in realising the value of its fantastic natural resources, such as the nearby Khijadiya Bird Sanctuary. As promised in the agenda, there were several opportunities to bird this gem of a reserve, which easily swallowed up numerous busloads of birders, local guides, travel-writers and other assorted hangers-on. 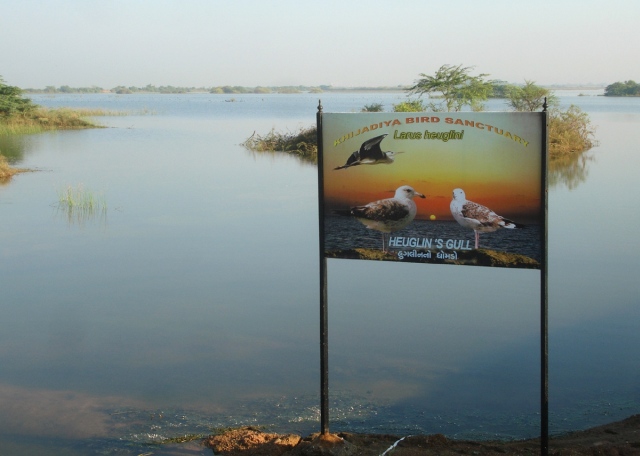 Khijadiya: Something for everyone, even larophiles (photo: Nick Moran).

Despite this being my sixth trip to India, the local birding provided many unique and memorable sights. Rose-coloured Starlings were in abundance; during our first evening at Khijadiya the rippling flocks of countless thousands skimming towards their roosts, set against a foreground of acacia-fringed pools teeming with bird life, was an unforgettable spectacle. A small group of Nilgai, striking 1.5-metre-tall antelopes, appeared in front of us as dusk fell. The next morning we soaked up huge rafts of waterfowl, mostly Pochard and Coot, with smaller numbers of Spot-billed Duck, Pintail and Ferruginous Duck, and enjoyed good views of Demoiselle Crane, Great Thick-knee, White-tailed Lapwing and Pallas's Gull. Passerine interest was provided by Desert Wheatears, Ashy-crowned Sparrow Larks and a flock of Lesser Short-toed Larks — a potential first for the reserve. 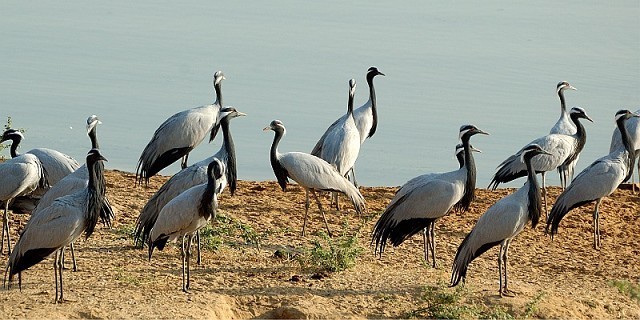 The day after the conference we joined a day trip to the Nayara Marine Reserve, where more than 250 Crab Plovers strutted the shoreline, alongside numerous other waders including Great Knot and Terek Sandpiper. Nearby, our first Variable Wheatear of the trip put on a good display. 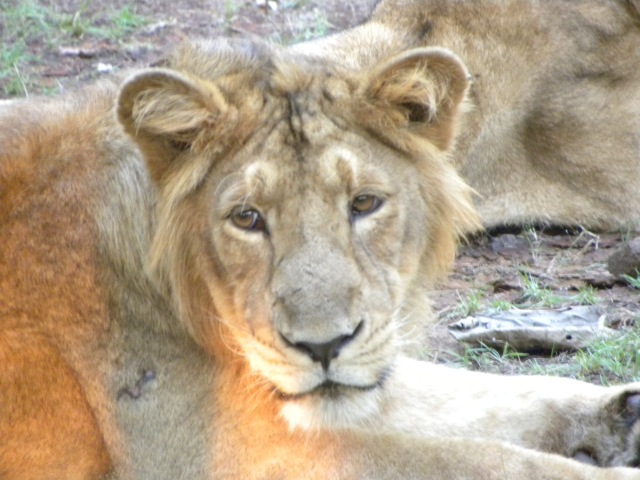 Chas Holt, Mike Blair and I took advantage of the opportunity to extend our stay in Gujarat, making a beeline for the world-famous Gir Forest, home to the Asiatic Lion. Such was the brevity of our stay (and the intensity of our itinerary) that we only had time for one jeep safari in the National Park; fortunately our luck was in, with no fewer than seven Asiatic Lions lapping up our attention! Although birding time was limited, we also managed an Ultramarine Flycatcher (a vagrant here?) in the Anil Farm House hotel grounds and excellent views of a pair of White-bellied Minivets from the jeep. 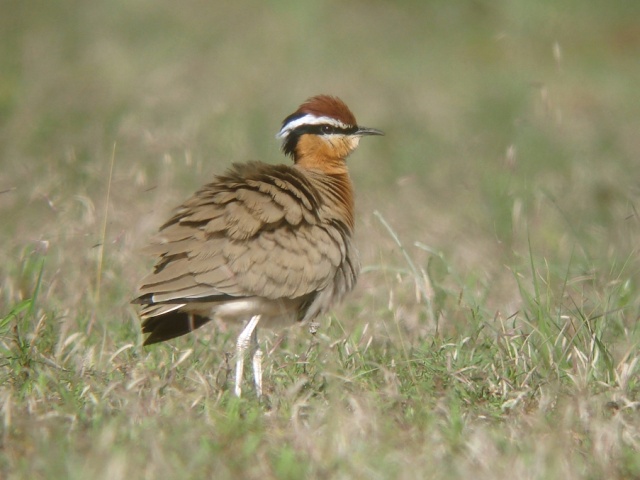 The long drive that followed, taking us northwest across the state to the fringes of the Rann of Kutch (specifically the Banni and Naliya grasslands), was well worth the effort, yielding the best 'specialist' birding of the trip. With a great deal of help from local expert and guide Jugal Tiwari, we were able to locate a mouthwatering selection of dry-country specialities, including Sociable Lapwing, Indian and Cream-coloured Coursers, Sykes's Nightjar and Lark, Grey Hypocolius, White-naped Tit, Rufous-fronted Prinia and Grey-necked Bunting. 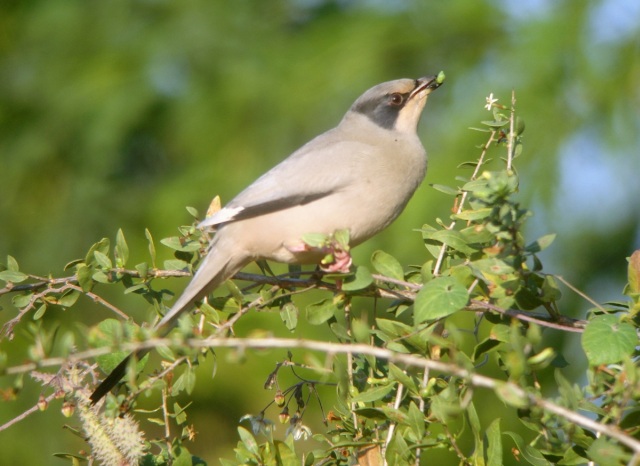 I particularly enjoyed the subtlety of an obliging Stoliczka's Bushchat and the excitement of a last-gasp dash across the Naliya grasslands in the fading light to catch up with a majestic pair of Indian Bustards — again thanks to Jugal, whose contacts in the Forest Department proved invaluable. 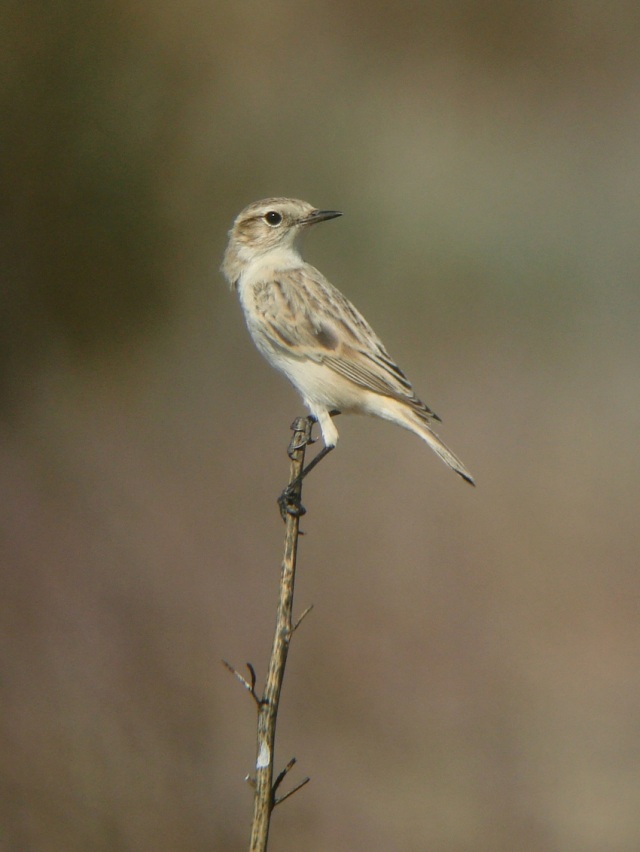