Getting to the root of long-term Tree Swallow declines

As in Europe, aerial insectivores – birds that hunt for insect prey on the wing – are declining across North America. Conserving vulnerable species such as these requires a good understanding of the factors impacting them at every stage of life. Juveniles and adults, for example, may face different threats and die at different rates.

Two new studies from The Condor: Ornithological Applications take an in-depth look at the demographic factors behind declining populations of Tree Swallow and show that although specifics may vary between locations, action is needed to address environmental changes affecting these birds across their geographic range.

Queen's University's Amelia Cox and her colleagues used a dataset from a swallow population in south-eastern Ontario that was monitored from 1975-2017, while Bowdoin College's Liam Taylor and his colleagues looked at data from a population from Kent Island, off the coast of New Brunswick, that was monitored from 1987-2010. Having access to detailed, long-term data allowed both sets of researchers to undertake demographic analysis and determine which life stages were having the largest impact on local population declines. In Ontario, overall declines were driven primarily by drops in over-winter survival and the rate at which swallow chicks successfully left the nest. On Kent Island, analysis showed that the population was dependent on immigration from the mainland, which dropped as mainland populations declined throughout the region. Over the course of the study, the Kent Island population plummeted from 202 adult birds to only 12. 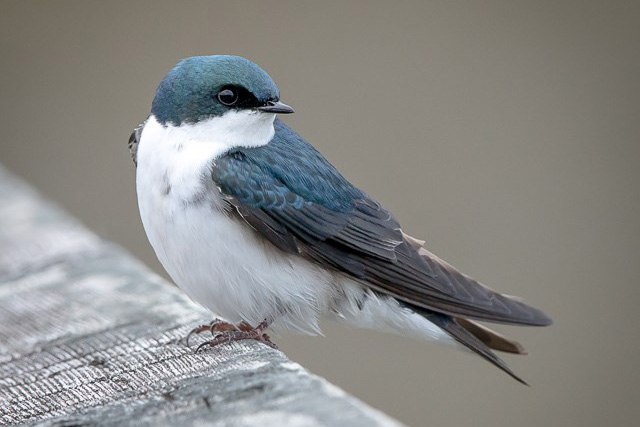 Cox and her colleagues believe that increasingly unfavorable weather conditions and declines in insect availability may be behind the demographic shifts they found. She said: "I hope that our results will spur more research into the environmental causes of Tree Swallow declines and declines of other, similar species. Our research points the finger at poor survival over winter and poor fledging as the probable demographic causes of population declines.

"The next step is to figure out exactly what has changed in their environment and why these birds are dying during these critical life stages. We have additional work in progress that is aimed at answering these questions. When we know that, I hope we will be able to start making changes to improve survival and fledging."

Taylor added: "It was an incredible opportunity to analyse a dataset that started before I was born. Working with these long-term data had an emotional connection for me as a researcher and birder. My own fieldwork on Kent Island took place during the summers of 2014 and 2015, by which time most of the swallow nest boxes on the island were empty. For me, it was sobering to look back through the data and envision those nest boxes full of activity and life."

Peter Dunn, a Tree Swallow expert not involved in either project, summarised: "These studies are part of a growing number of studies addressing the causes of population declines among aerial insectivores. In terms of understanding population declines in aerial insectivores, both studies point to adult survival during migration or on wintering areas as an important factor. Thus, these models identify areas where we can focus our future research efforts. Recent studies of Tree Swallow migration using geolocators suggest that populations breeding in eastern Canada are migrating along the east coast to winter primarily in Florida and Cuba, so these areas should probably be the next focus of study."