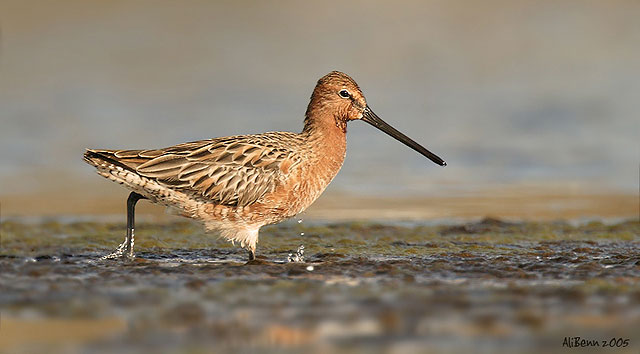 Asiatic Dowitcher: Beidaihe, China Although there are no records (yet) for the Western Palearctic, this rare species is a potential candidate for vagrancy here. There are two records in Africa, the most recent of which was in South Africa in November 2004. In all plumages, it resembles a smaller version of Bar-tailed Godwit, but has a heavy, mostly black, bill and is shorter-legged and shorter-necked (photo: Alister Benn).

Often travelling huge distances between breeding and wintering sites, waders are true globe-trotters. Because of this, any species undertaking a sizeable migration is 'game' for rarity-seekers in Europe. For those of us who love the thrill of scouring local wader flocks for the unexpected, waders offer a real opportunity. Although many of us look to the autumn and the arrival of Nearctic 'peeps', the late summer/early autumn offers observers a great window of opportunity for finding those mouth-watering Siberian waders.

There have been just 5 British records, all of which were between 1981 and 1993. Three were reported in 1993, though, conceivably, the same individual may have been responsible for all three sightings. One at Gimmingham, and then other north Norfolk sites, from May to July of that year allowed many to acquaint themselves with the subtleties of identification.

Separating this species from the two other pratincoles on the British list can be tricky, as it exhibits a mixture of characteristics of Black-winged Pratincole and Collared Pratincole. It has the chestnut underwing coverts of Collared, but they have a thicker black frame. The upperparts more closely resemble Black-winged, as the white trailing edge is lacking and the upperparts lack the contrast of Collared. At rest, the short tail is a key feature, tending to fall halfway between the primary and tertial tips. Oriental also shows a warm buff wash to the breast. 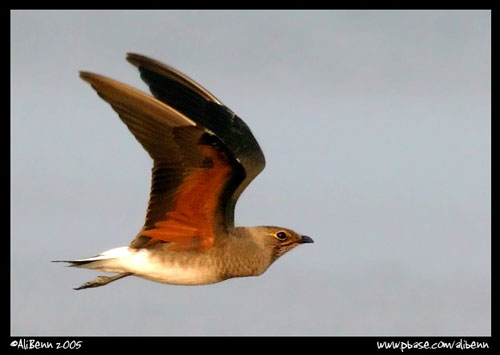 The first British record, in 1989, was just a one-day bird in mid-September on Shetland, so many birders breathed a sigh of relief when the second chose the Tees Estuary (Cleveland/Yorkshire) from mid-October to November 1996. Although initially a 'Great Dot', it did perform well towards the end of its stay on the Yorkshire side of the estuary. A third bird was found in early autumn 2004, firstly in Co. Dublin and then in Lancashire.

A distinctive species. When seen well, the proportions differ to Knot with a smaller head and thin bill and an attenuated rear. Summer-plumaged birds are eye-catching, with heavy breast spotting and markings onto the flanks. 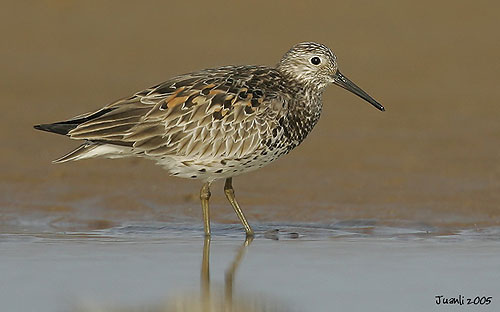 The first British record, in 1981, on the Dyfi Estuary (Ceredigion) was shrouded in secrecy. The second, by complete contrast, at Burghead Bay (Moray/Nairn) from late November-late December 1994 was enjoyed by several thousand birders who travelled north to savour this superb wader. 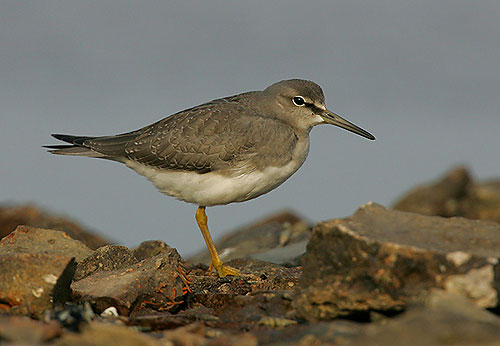 The two British records, in 1982 and 1985, took many birders by surprise. Few had even heard of this diminutive wader, nor really knew what to expect when they saw it! There is a possibility that both records related to the same bird. A recent record from Sweden raised hopes of a reappearance of this species in Britain for a new generation of listers, but it was not to be.

Identification is relatively straightforward. The small size, together with a completely dark rump, immediately point towards something out of the ordinary. The bill is relatively straight and the plumage recalls a miniature Whimbrel, but is buffier. A possible pitfall may exist with the Nearctic Eskimo Curlew, but that species is now considered to be extinct. Having to consider either would present a nice identification conundrum for the lucky finder of Britain's 3rd. 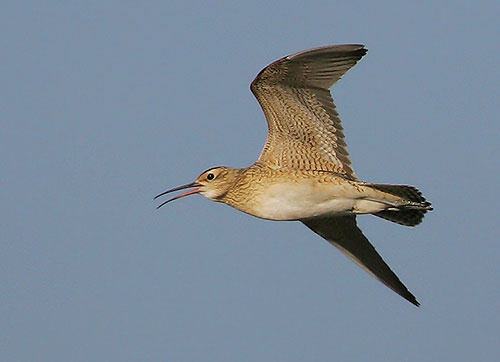 Formerly a great rarity in Britain, there have now been well over 100 British and Irish records. An extension of the breeding range has led to its now expected annual occurrence on our shores. Most records of this graceful wader have occurred in the late summer, though it is still something of a rarity away from southeast England.

Identification is relatively straightforward; confusion with Greenshank is perhaps overstated. Marsh Sandpiper is a very delicate wader, with long legs and a fine bill. In flight the legs extend beyond the tail. Many of the records have been adults, with breeding-plumage birds intricately marked with black on brownish-grey upperparts. 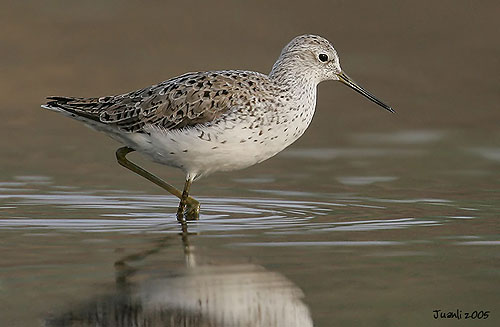 This species is rightly regarded as the Sibe of the summer/early autumn period. 'Lesser Golden Plover' was split by the BOURC as recently as 1986, since when a better understanding of the identification criteria for separating them has led to more being picked out amongst Golden Plover flocks. The majority of the 65 or more British and Irish records have been in the coastal regions of eastern England, though a number are no doubt regularly found returning birds. The subtle identification from American Golden Plover was covered in a recent article. 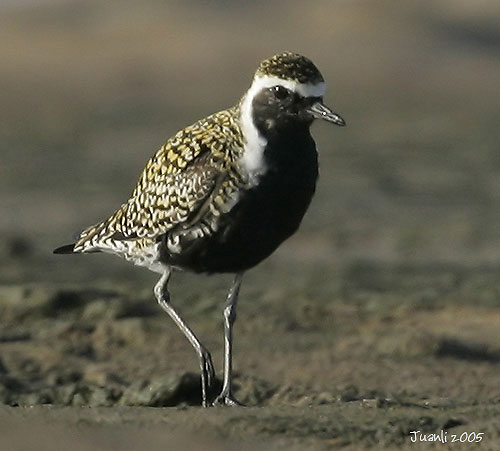 This beautiful wader remains an extremely rare vagrant with approaching 30 British and Irish records. Most have occurred in the southeast, primarily from early autumn onwards. As is often the case with rare 'sibe waders', the majority have been adults, perhaps due to the fact that north-south movement of the species in autumn is a less favourable trajectory for delivering juveniles as 'reverse migrants' into western Europe. 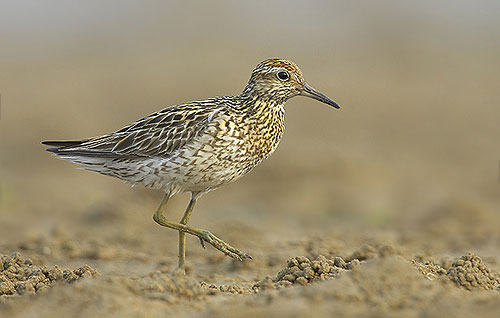 With nearly 70 British and Irish records, it is difficult to believe that the first British record occurred as recently as 1951. A distinct upturn in numbers have taken place since the 1970s and records are pretty much annual nowadays. Most have been in May and June, primarily in eastern England, though wintering has taken place (Devon 1973/74 and Northumberland 1989/90 and 1990/91). 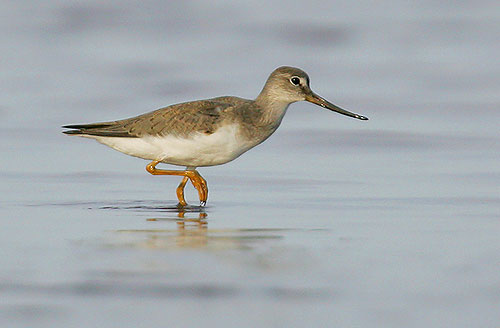 The first British and Irish record occurred as recently as 1986, but since then there have been a further seven British and Irish records, including the first, and only, European juvenile on Fair Isle (Shetland). The most notable of these was an inland bird in Cambridgeshire in 2001, proving that with waders almost anything is possible. The identification of juveniles was covered in a recent article. 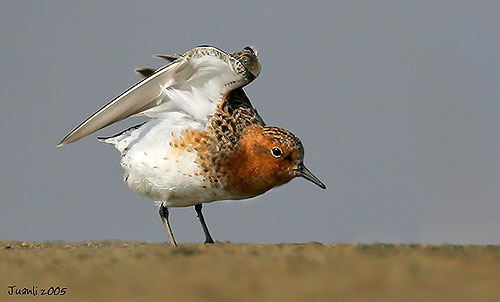 The photographs in this article were taken by Alister Benn and Juanli Sun. You can see more of their stunning work at http://www.pbase.com/alibenn/.