A Red-footed Falcon nimbly dispatching insects over a marsh among a loose group of Hobbies is a thrilling sight; this is a bird which rouses excitement through its great aerial skill, smashing looks and travelling abilities. It breeds, often colonially, from Eastern Europe to Mongolia and the Lena River. Its journey to and from its South African wintering grounds routinely leads it across the Mediterranean and puts it at risk of illegal hunting, one of a handful of threats which are thought to have induced a decline in the European population. This migratory behaviour also subjects it to regular vagrancy, not least in spring when they are thought to take a more westerly route. Annual totals oscillate but overall the species is sufficiently frequent that it is no longer an official rarity, and in fact the Rarities Committee ceased considering the species at the end of 2005. Here, the occurrence and identification of spring birds are summarised.

Sexual dimorphism in Red-footed Falcon plumage is more marked than in any of the regular British falcons. The cere, legs and eye-ring are coloured orange on both sexes but this is deeper on males, which are coloured blue-grey with a darker tail and underwing coverts, silvery primaries above and red on the 'trousers' and vent; females are barred blue-grey above, have white on the face, a limited dark mask and are a light rufous colour on the underwing coverts, the crown and from the breast to the belly. Second-calendar-year birds are similar to adults but show retained juvenile feathers (which are brown and barred) on the wings and tail, while other signs of immaturity sometimes visible in males include orange markings, faint streaking or paler feathering on the underparts. 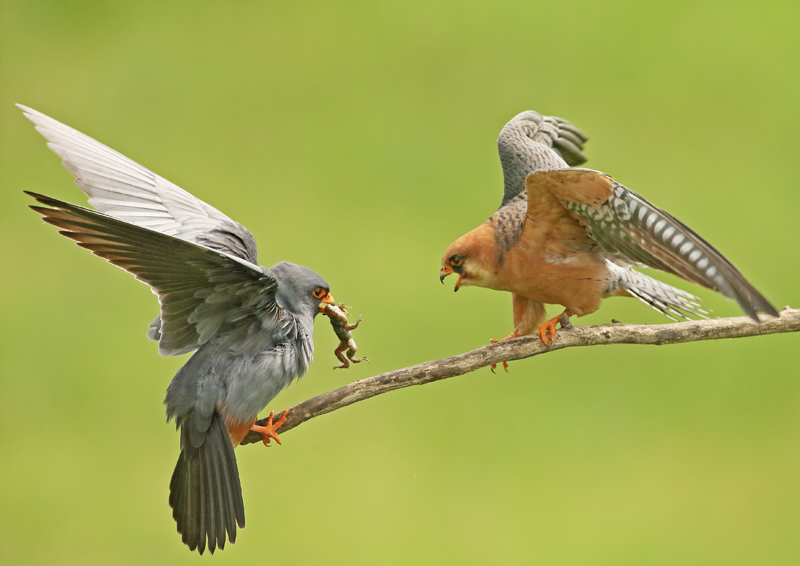 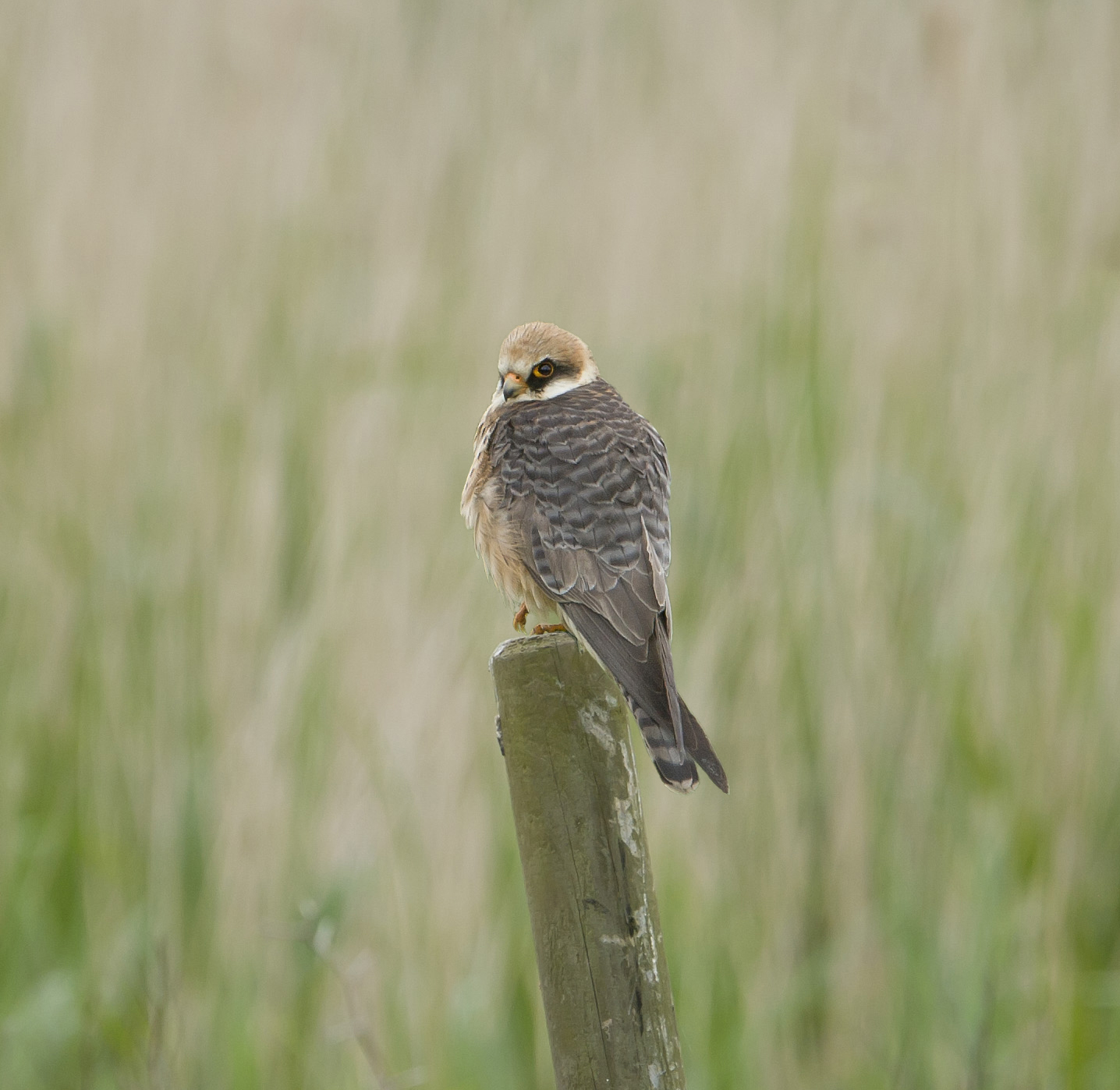 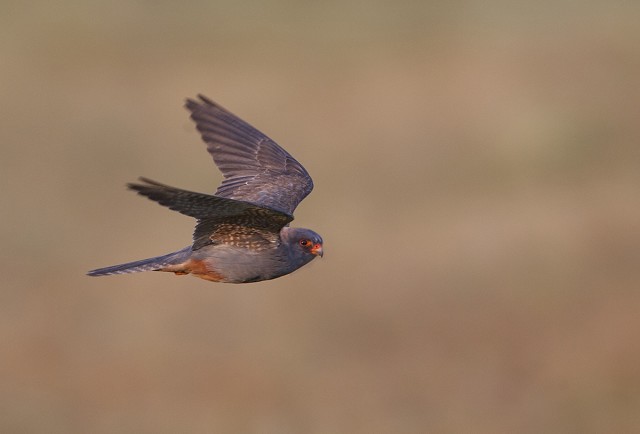 Immature male Red-footed Falcons are particularly variable; some can be quite adult like but most show varying degrees of immaturity. This one retains juvenile-type wing and tail feathers (Photo: Kevin Du Rose)

Ever since our sole record of Amur Falcon at Tophill Low (East Yorkshire) in 2008, which remained misidentified as a Red-foot for 32 days, subsequent birds have received extra scrutiny in the hope that another Amur might be identified more quickly. Features to look for in adult males of this far rarer species include paler underparts, a hint of a dark mask and, crucially, white on the underwing coverts and axillaries. Females are spotted black on white underparts (save for a buff vent), with barring on the flanks and there is less of a contrast between the head and the upperparts than in female Red-footed Falcon; the underwing coverts are pale, as in males, but faintly patterned and less eye-catching. Second-calendar-year males, such as the 2008 bird, aren't quite as obvious due to retained juvenile coverts, though any recently grown adult tail feathers are paler grey than those of Red-footed Falcon. The underparts are also paler grey and there might be prominent streaking on the breast. Although the underwing coverts of a young male may not be strikingly pale as in an adult, the black-and-white patterning is quite different to the mix of brown and grey tones of a Red-foot. 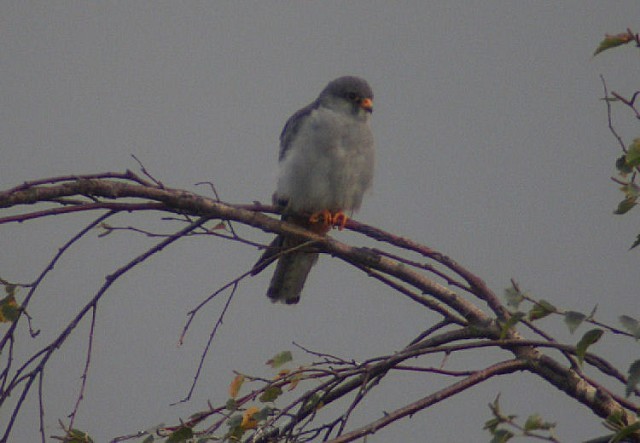 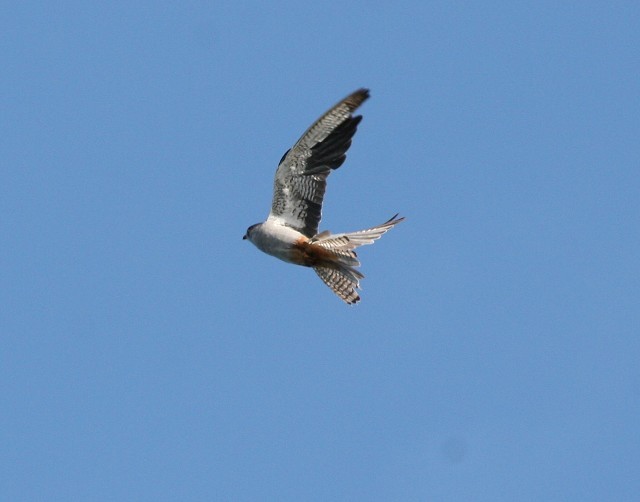 Records of Red-footed Falcon are widely scattered and the majority of British counties have recorded the species, with many boasting a respectable tally, though there is naturally a bias towards the south and east coasts. It is a rarer bird in Ireland but there are now 32 accepted records there. The peak arrival period for spring birds is mid-May to mid-June but late April records are not unheard of; one even reached Cape Clear, Co Cork, as early as 27 March 2012. They tend to arrive following anticyclonic conditions over Europe which result in pushes of warm air from the south-east, weather well known for exciting spring birding. Commonly associated with its more numerous relative, Red-footed Falcon is often found among groups of Hobbies as they share a fondness of large flying insects and are therefore drawn to freshwater habitats and open country.

A breakdown of spring reports from each county since 2004 reveals that Norfolk has been the best for Red-footed Falcon in recent years. Sightings have often involved birds moving along the coast between Kelling and Holme-next-the-Sea, while the Norfolk Broads and Winterton-on-Sea have had their fair share of the county's impressive tally, which constitutes 17 per cent of national reports over the last 10 years. Kent is second, accounting for 11 per cent, with sites in the Stour Valley coming up more than anywhere else. Yorkshire is another likely area (with over 7 per cent of reports since 2004), with visible migration hot-spots such as Flamborough Head and Spurn Point liable to pick up individuals tracking the coast and reserves like Hatfield Moors and Thorne Moors draw in hungry birds to feast on dragonflies. Cambridgeshire and Suffolk each boast approximately 6 per cent of recent records, the Ouse Washes being a hot-spot of the former and the promising habitat and geography of the latter giving plenty of potential for finding one. Cornwall, Dorset and Hampshire are also in the top 10 counties along with Derbyshire, which appears a little out of place but its reservoirs and lakes have proven to be worthwhile stop-off points. 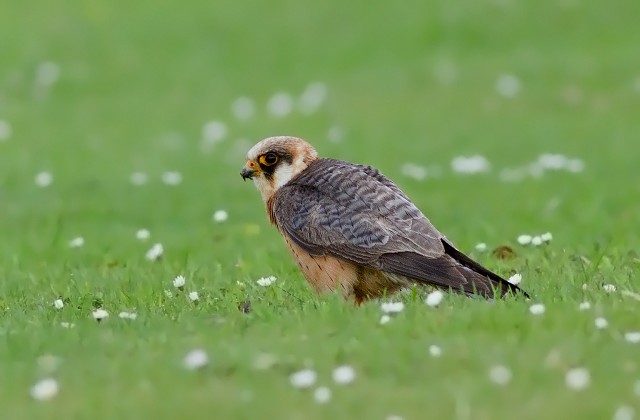 The same reports were used to examine habitat use. The birds show a strong preference for hunting over freshwater habitats such as lakes (13 per cent of reports), floodplains and freshmarshes (together 23 per cent) where large insects are most prolific. Saline habitats are where Red-footed Falcons are found with the lowest frequency, along with dunes; birds on heaths, moors and even around urban fringes are more expected. Anywhere on the south and east coasts, but principally on headlands, in the right conditions and at the right time of year offers a chance of intercepting a Red-foot arriving off the sea or tracking the coastline in search of somewhere to refuel; it's also worth checking any gatherings of Hobbies in case they are accompanied by this highly desirable raptor. 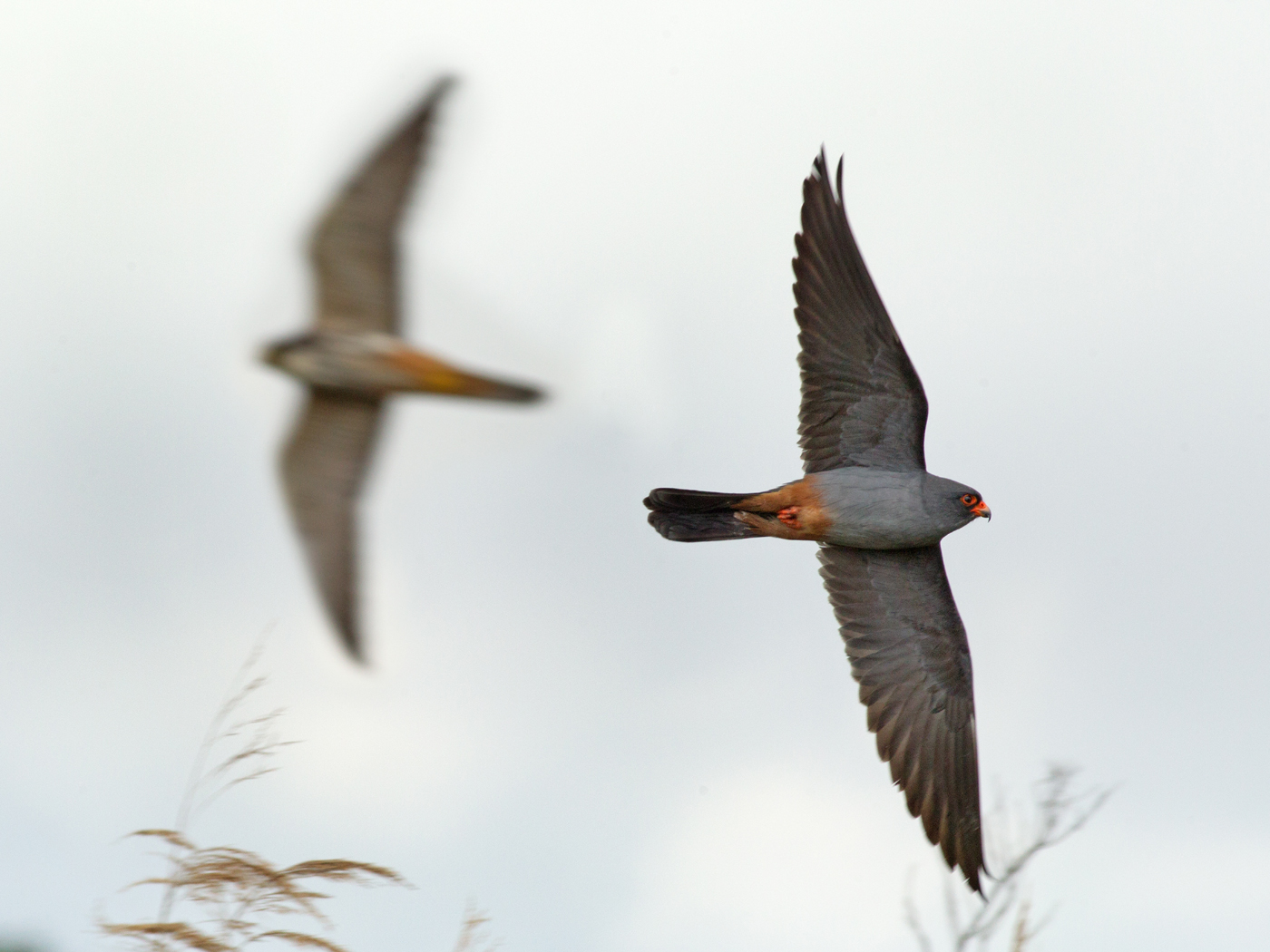 The coming weeks are ripe for Red-footed Falcon and some have already been reported this year. Think of some suitable local wetland sites and open areas which you know to support good numbers of dragonflies or feeding Hobbies and give them a check in case your luck's in. Sites which have had Red-footed Falcons once tend to attract them again so a look back at the records on Bird News Extra might give you some additional clues as to where one could be waiting to be found. In warm weather, simply looking up and keeping the species in mind could come good as birds drifting through high are frequent in all sorts of seemingly unlikely places. 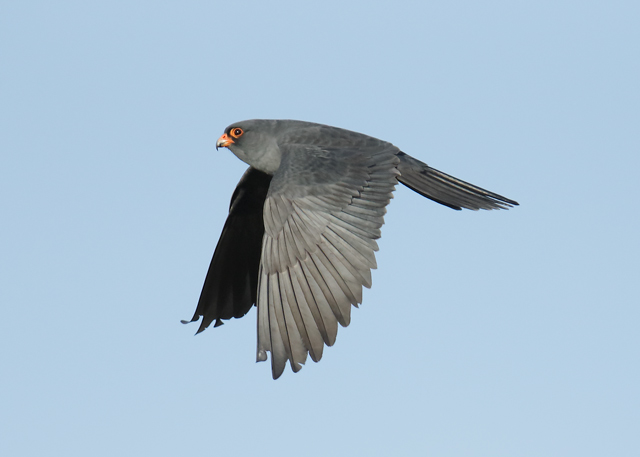 Adult male Red-footed Falcon, Suffolk. One of the most handsome birds of prey on the planet? (Photo: Iain H. Leach)