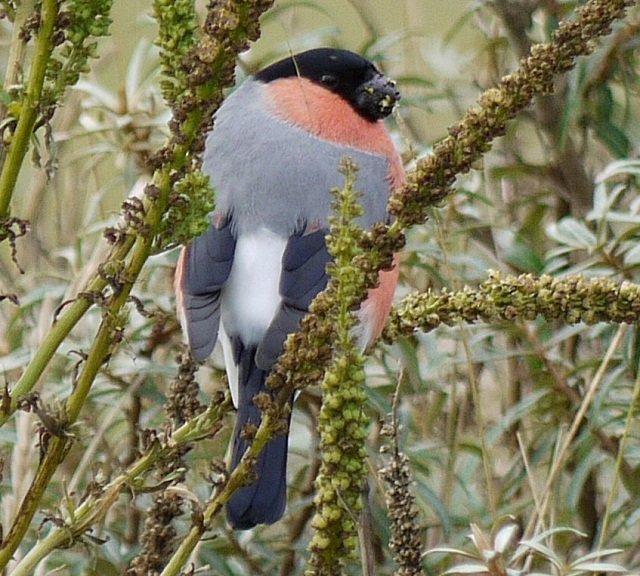 I have made no secret of the fact that the Bullfinch is kind of special to me. At 11 years old, seeing my first male Bullfinch outside my bedroom window, I found it mesmerising in its beauty. Many years later I moved to within easy reach of Britain's east coast, and with it the possibility of self-found Northern Bullfinch. After two years of deliberately seeking out many opportunities for careful scrutiny of British Bullfinches, my moment came on 30th October 2003. Having identified my first Northern Treecreeper in Danes Dyke, Flamborough, and with both Pallas's and Yellow-browed Warblers present, the scene was set. Walking up the track at South Landing, I came across a female Bullfinch that was clearly more pallid-looking than the British females, with which I was now well acquainted. It was a bit of a ghost in comparison and its paleness combined with significant plumpness and seemingly extra white below; I declared to my colleagues: "It must be a Northern."

The bird dutifully flew straight into Mike Pearson's mist-net and before long he announced its wing length as 93 mm, meaning it was indeed a Northern, with a wing nearly a centimetre longer than any British female.

So here comes a short guide to what to look for. It includes some reasonably well-known features and others you might not have heard of. Some of these are 'soft' and subtle characters (e.g. plumage tones) which can be hard to describe and subject to variation in appearance in different light. Photos can be useful but also a nightmare to interpet (for hopefully obvious reasons), so please bear this in mind when you read this next section. It is based on the assumption that the reader is willing to gain a genuine familiarity with the British Bullfinch before trying to apply these criteria. (Apologies in advance to Irish readers, as ssp. pileata is resident in Britain and Ireland. Once referred to collectively as 'the British Isles', it was in that era that the 'British Bullfinch' was named. I am married into Ireland so I understand — we perhaps need a better English language prefix. How about 'Celtic Bullfinch'?!). 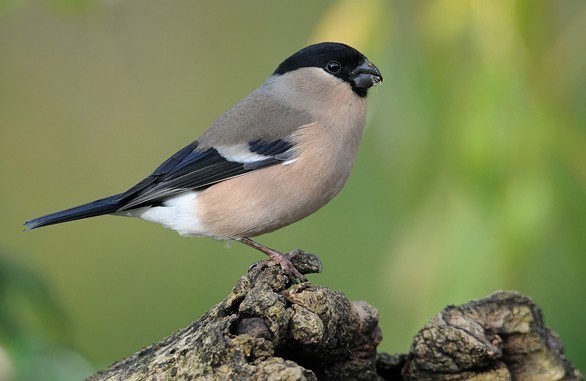 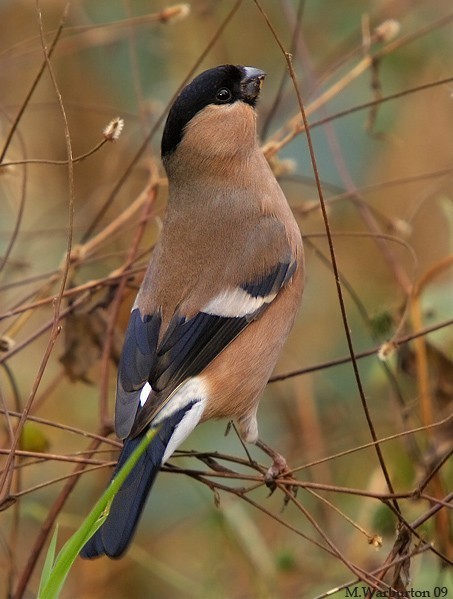 'British Bullfinch', Silent Valley, Gwent (Photo: Mike Warburton)
Notice how two photos of the same species, which should look basically the same, appear so different. Always be aware of this when assessing subtle differences in plumage tones in photos. Nevertheless, the dark muddy upperparts evident in both shots are typical of female British Bullfinch. The lower bird has a shorter, buff-tipped (retained juvenile) outer greater covert, so can be aged as a first winter. 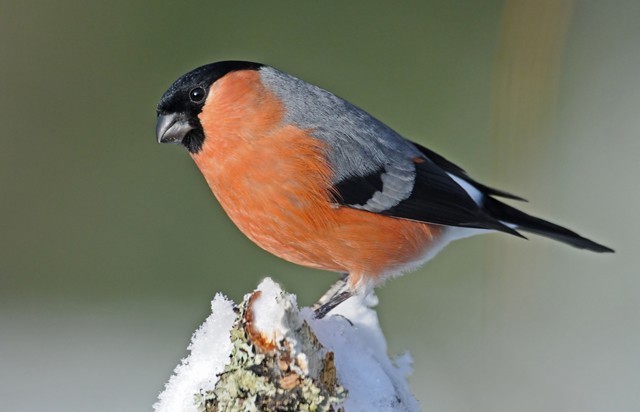 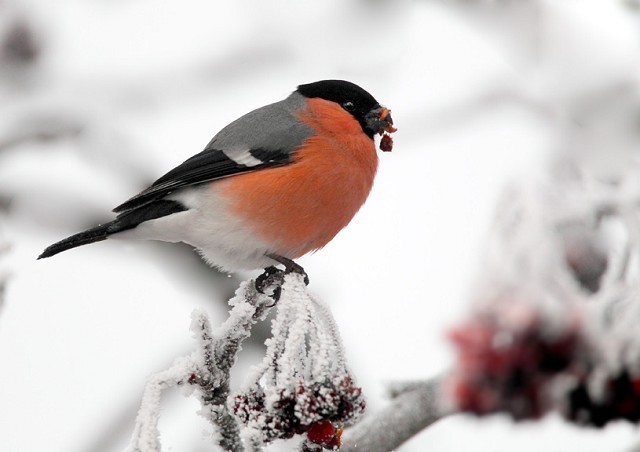 Bullfinch, Meole Brace, Shropshire (Photo: John Fielding)
Notice how the orange tones can be obvious in one bird but more subtle in another. It is always best to practice in the field.

The characteristics of Northern Bullfinches

Overall, Northerns are substantially larger than British birds and this is usually obvious with a working knowledge of British Bullfinch, and especially in direct comparison. A female Northern Bullfinch at Spurn in October was obviously larger ('one size up') next to several Chaffinches in flight. The bill on Northern Bullfinches can look really big, both in profile and across the face when head-on. Sometimes the bill merges in a continual profile with the forehead — there's a bit more of a forehead on British birds. The primary projection can also be helpful, with the length of primaries beyond the tertials often looking 'long' on Northerns, appearing about the same as the exposed tertials. On British birds the primary projection looks slightly shorter than the exposed tertial length and on many looks about ¾ of the length. It's not an absolute character, but I regularly get the impression of the difference. The size and proportions differences are, I admit, all a bit subjective and much trickier to use with lone birds. Again, familiarity with British birds is vital if this is to be used meaningfully. 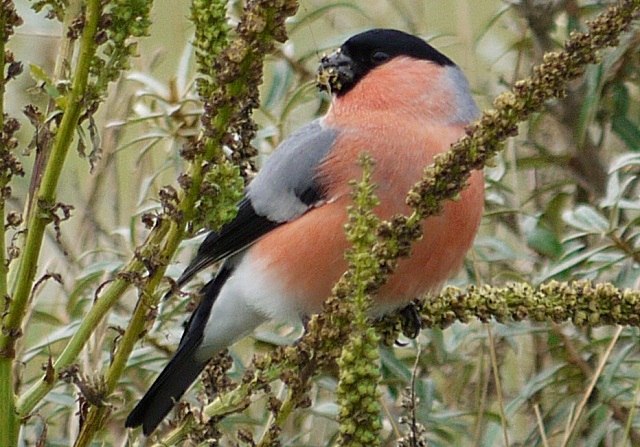 First-winter male Northern Bullfinch, Spurn, East Yorkshire, 18th October 2010. I saw this one. It had already been trapped and measured, along with a first-winter female. On first views it did look rather huge, with a particularly broad grey wing-bar and bright PINK underparts (no orange tones). The gorgeous pastel tones of cold pink below and pale blue-grey above make this an 'easy' male Northern ID. (Photo: Richard Willison)

The upperparts average clearly paler and cleaner, with a soft blue tone to the grey. The underparts are also slightly paler and colder and with more of a clean, pastel-pinkish tone. I usually find that when looking at British birds there is a subtle, warmer orange component to the underparts. The wing-bar tends to look obviously broader on average, varying from grey to bright white and often with a serrated or saw-toothed edge to the upper side of the greater-covert bar. On British birds the wing-bar is mostly grey and the wing-bar shape is on average thinner. East Siberian birds have the broadest wing-bars, which are usually white with some white bleeding up the outer edge of the greater coverts. I have not found this latter feature on any British Bullfinch, nor is it readily apparent on Scandinavian breeders, suggesting it may be a feature of birds originating from further east. It was present on a male at Whitby in October 2004. 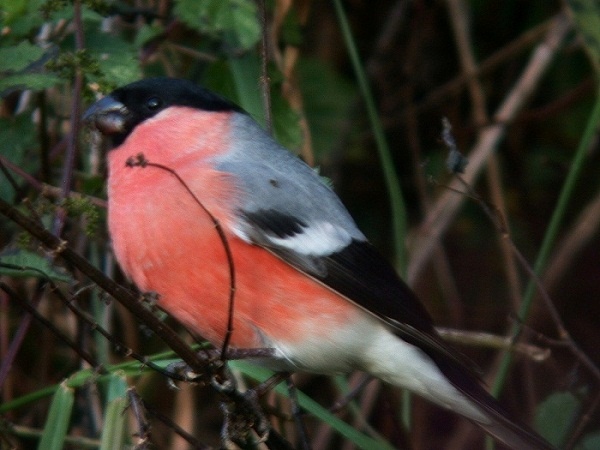 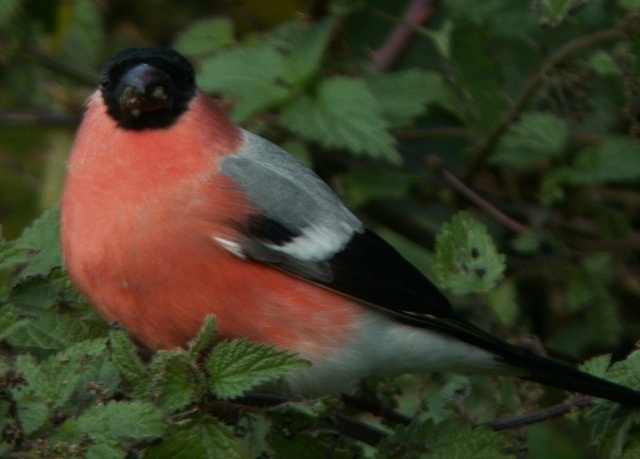 NB: First-winter birds of both sexes are often easily aged by the presence of a few greater coverts with deep buffy-coloured tips — these are retained juvenile feathers (see the first-winter female below). First-winters vary from showing no visible buff-tipped coverts to about half, and occasionally a bird may retain all of its juvenile coverts, so that wing-bar just looks rather confusingly thin and buff-coloured.

White streaks in the emarginations on the outermost primaries are found frequently in both forms and in my view are not useful identification features. A white lozenge-shaped mark on the outer tail feather is found least commonly in British birds — one of 15 specimens of males — but is increasingly common in northern birds — one of 15 males but four out of 15 females. In a small sample of far eastern birds it was found in two out of three males. 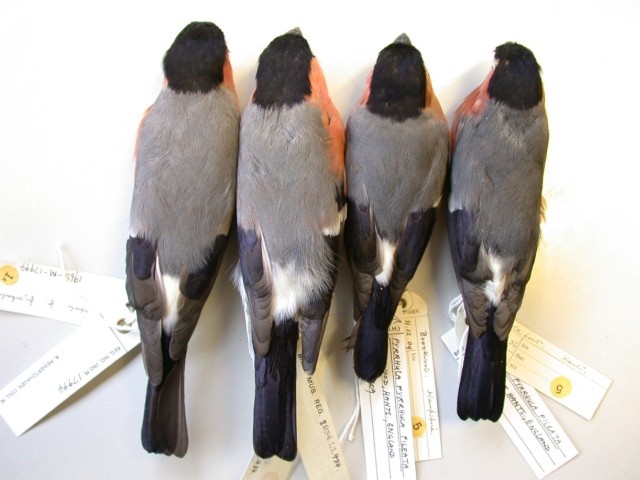 Some male Bullfinches have pink feathers admixed on the upperparts. This can be found in both British and Northern Bullfinches, though perhaps increasingly so further east. Some far eastern birds (ssp. cassini) even have pink mixed into the black crown feathers.

Northern females look like a pallid 'ghost version' of the British female. The mantle and scapulars are pale-brownish with a similar degree of saturation to the underparts, so the upper and underparts combined appear more pallid and concolourous. On British birds the upperparts are a darker muddier brown colour, which contrasts more with the paler underparts. On Northern females the underparts are paler and cleaner, often with a lilac hue washed through. Some white extends onto the lower belly so there is more gradation between the breast and the belly, paling gradually to the ventral region. On British birds the underparts are a dirtier muddy-beige brown, concolourous down to the vent with a clear division between where the dark ends on the lower belly and the white of the vent. Otherwise, in my experience, the wing-bar on British females can be broader and whiter than in males, overlapping in this regard with female Northerns. Even the 'saw-toothed' upper edge of the greater covert bar, whilst perhaps more frequent in Northern birds, can also be occasionally found on British birds. The white lozenge mark on the outer tail feathers is also more frequent in female Northern, being found in five out of 18 individuals (one in 15 British females) when I checked specimens at the Tring museum. 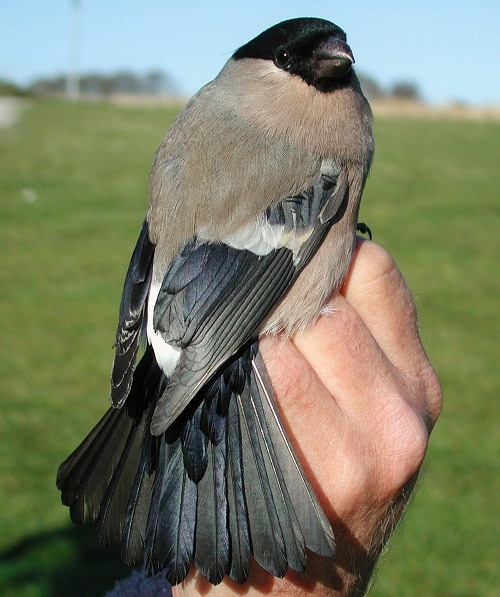 I found this first-winter female Northern Bullfinch at Flamborough Head (East Yorkshire) in late October 2003. Nervously identified on sight views, thankfully it ended up in Mike Pearson's mist net and the ID was confirmed on wing length. The presence of shorter buff-tipped outer greater coverts means this is easily aged as a first-winter. (Photo: Martin Garner.)

I think I am a little out of my depth in making any overly bold statement about the calls — I do record calls now, which I didn't in 2004. The British Bullfinch whistle 'peeuu' should be pretty familiar to most folk. I heard the harmonic rich trumpeting calls in 1994 and if you hear a Bullfinch like that, the ID should be fairly straightforward. Recently, again listening to Northerns at Spurn, sometimes the call didn't sound hugely different from British birds — a tad lower-pitched, which came out as 0.5 to 1 kHZ lower than British birds on a sonogram. However, I also heard one giving a subtle trumpet-like call with a tinny quality — perhaps with weak harmonics — certainly more than on British birds, but not as loud or distinctive as in 2004. I think I need to keep listening and recording. My encouragement would be record if at all possible and I'd also recommend listening to some recordings on xeno-canto.

Nial Moores wrote to me with regards these birds thus: "Martin, the only cassini Bullfinches I have heard calling (a very few times here in Korea) sounded very like Bullfinch in western Europe. A little tinnier, similar to rosacea and sadly nothing comparable to recordings of trumpeting Northern Bullfinch that I have heard online."

You are looking for a big, long-bodied, fat-looking male Bullfinch with a slightly longer primary projection — about tertial length. It should have clean pale-grey upperparts, slightly bluish, and lack the darker, smoky tones of British males. For the underparts, think cold and pink! Obvious presence of warmer, orange tones is not so good. The wing-bars should be broad with a saw-toothed upper edge to the covert bar. If it has broad, U-shaped white to the upper edge and pink feathers mixed into the upperparts, it may be from even further east than Scandinavia. If it gives the trumpet call, then in theory it all becomes rather easy. 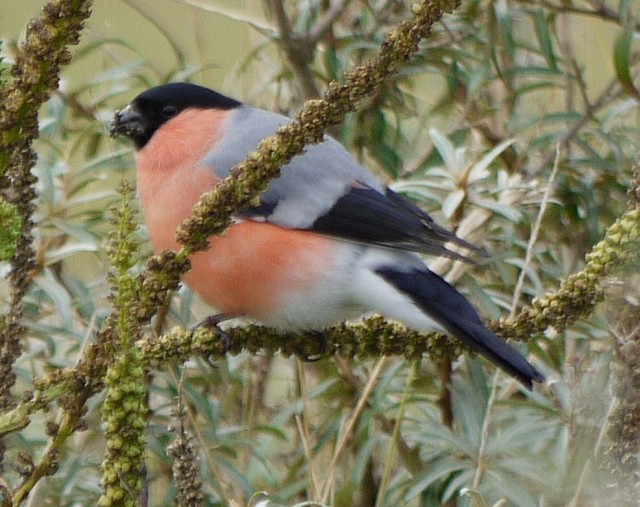 An ongoing familiarity with a female British Bullfinch is essential. Like the male, the female Northern Bullfinch is a larger, longer, plumper bird. Direct size comparison with British Bullfinches or other species helps a lot! They look like a paler, ghostly version of the British female, with less contrast between the upper and underparts with especially paler upperparts, larger pale grey nape, and underparts with more of a Waxwing-like lilac hue. British females have muddier darker underparts; the wingbar is of less consequence in males, but some Northern females have a saw-toothed upper edge. Northern Females are more likely to have a white lozenge mark in the outer tail. Females Northerns can trumpet too. 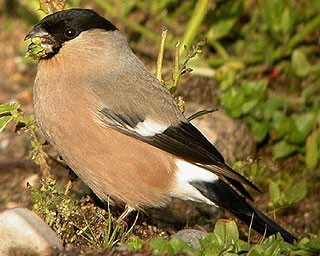 And the Siberian Question?

We have much to learn and insufficient data! The 2004 birds seemed to have a greater frequency of individuals with the white lozenge mark in the tail and some (like the Whitby bird) with white U-shapes in the greater coverts. When I looked at specimens, I think these features seemed to be present with a higher frequency east of Scandinavia, although another visit to double-check is in order. Together with the trumpet call, I do suspect that some come to Britain from further east, such as European Russia at least. So not strictly 'Siberian' — perhaps Northern trumpeting Bullfinches are 'Russian Bullfinches'. These, like other invasive species such as Crossbills and Redpolls, may stay and breed in small numbers in Scandinavia.