As August turns to September, wader passage is in full swing throughout the UK. Sought-after species include Wood and Curlew Sandpipers and Little Stint, and many birders hope to find rarer visitors such as Pectoral and Buff-breasted Sandpipers. But how many have Great Snipe on their radar?

Before 1950, Great Snipe was encountered fairly regularly in the UK, with a total of 532 records. During this period Norfolk was by far the most productive county, accounting for 15 per cent of the records (Hudson and the Rarities Committee 2014). Shooters were very active in Norfolk in the 19th century, shooting at least 53 Great Snipe between 1856 and 1899 alone and a further 25 in the first half of the 20th century. While the high levels of shooting activity in the UK in the 19th century partly explains the large number of historical Great Snipe records, it also appears that the species was more frequent in the UK during this period (Andy Stoddart pers. comm.).

Although Great Snipe has occurred less frequently since 1950, it has still occurred more often than several other sought-after waders. From 1950–2014, Great Snipe was recorded on 170 occasions in the UK, which is more than Semipalmated Sandpiper (137), Marsh Sandpiper (134) and Pacific Golden Plover (84). However, of these 170 records, 41 per cent occurred on Shetland and Orkney, rendering Great Snipe an enigmatic species for many British birders.

Although observers in Shetland and Orkney stand the best chance of finding Great Snipe, a wide spread of records elsewhere in Britain shows the species can and does occur elsewhere. Since 1950, the best mainland counties have been Norfolk (eight records), Yorkshire (8), Kent (4) and Cleveland (3). Over the same period the Isles of Scilly have only produced five individuals and Cornwall hasn't hosted one since 1949, demonstrating the easterly bias to the species' occurrence in the UK. Inland records are rare but several have occurred away from the coast in modern times, such as birds at the Nene Washes, Cambridgeshire, on 12–13 September 2012 and Rye Meads, Herts, on 30 September — 1 October 1996.

Figure 1. Distribution of accepted Great Snipe reports by county. Note the east coast bias, but also that the species can turn up anywhere (Graphic: BirdGuides.)

So what strategy should British mainland birders be using to find the species?

First, clearly, birders should look at the right time of year. Figure 2 quite vividly depicts that September is by far the best month, though some early birds have been found in August and occurrence can spill over into October (and even beyond).

Birders should also be searching in the right habitat. Don't succumb to what Ken Shaw refers to as 'Yellow-browed fever' (Shaw 2006), which is only focusing search effort for migrants on scrub and trees. Although this strategy will likely yield rewarding September discoveries such as Barred Warbler, Red-breasted Flycatcher and of course Yellow-browed Warbler, it ignores the grassland habitats that Great Snipe usually favour. Although some individuals in the UK are found at wetlands, it is most often found in drier habitats. Searching set-aside fields, ditches and meadows is as good a bet as any — but beware that Common Snipe also routinely uses drier areas on passage! 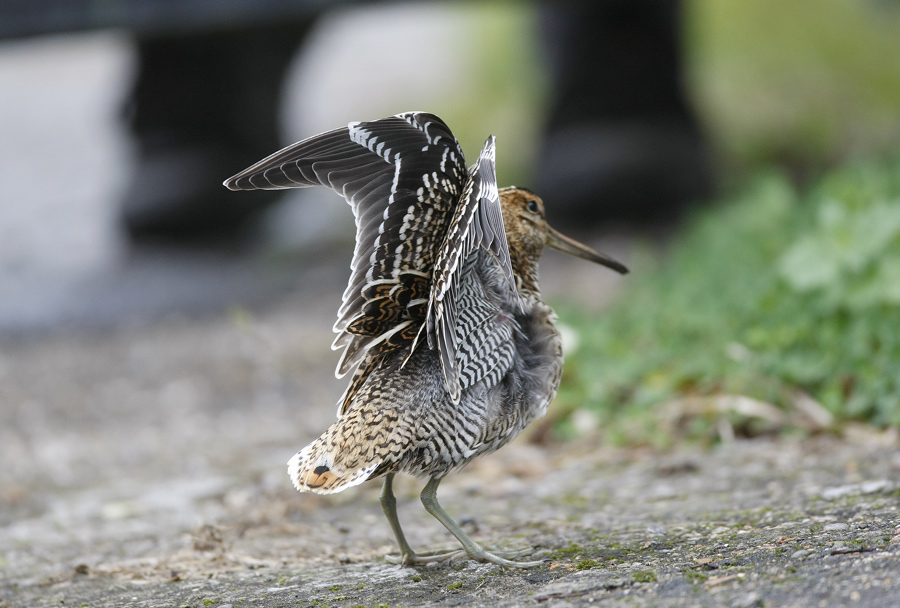 Figure 3. Great Snipe, Kilnsea, East Yorkshire. Most of the key features of Great Snipe are visible in this photo, including the white tips to the wing coverts, the white tail sides and heavily barred underwing. (Photo: Dave Hutton.)

What about weather conditions? Many Great Snipe have been found during 'falls' of passerines in easterly winds in September, but finding the species in other conditions is not out of the question. For example, a particularly showy bird was found at Spurn in September 2013 after a period of winds from the western and northern quarters, during which only small numbers of scarce and common passerines arrived at the same site.

Initial views of a candidate Great Snipe are likely to be of a stocky, silent snipe flushed while walking through coastal grassland. However, to rule out Common and clinch the identification, observers need to see several plumage features. Compared to Common Snipe, Great shows more white in the upperwing (all of the wing coverts, including the primary coverts, are fringed white), broader white sides to the tail and darker, more densely barred underwings. Great Snipe can occasionally show surprisingly well, such as the aforementioned Spurn bird (which was later found dead; see Figures 3 and 4). More often, though, it is only seen well in flight. Helpfully, all the key plumage features are visible with good flight views, although sharp photos that capture plumage details will greatly assist in confirming identification. 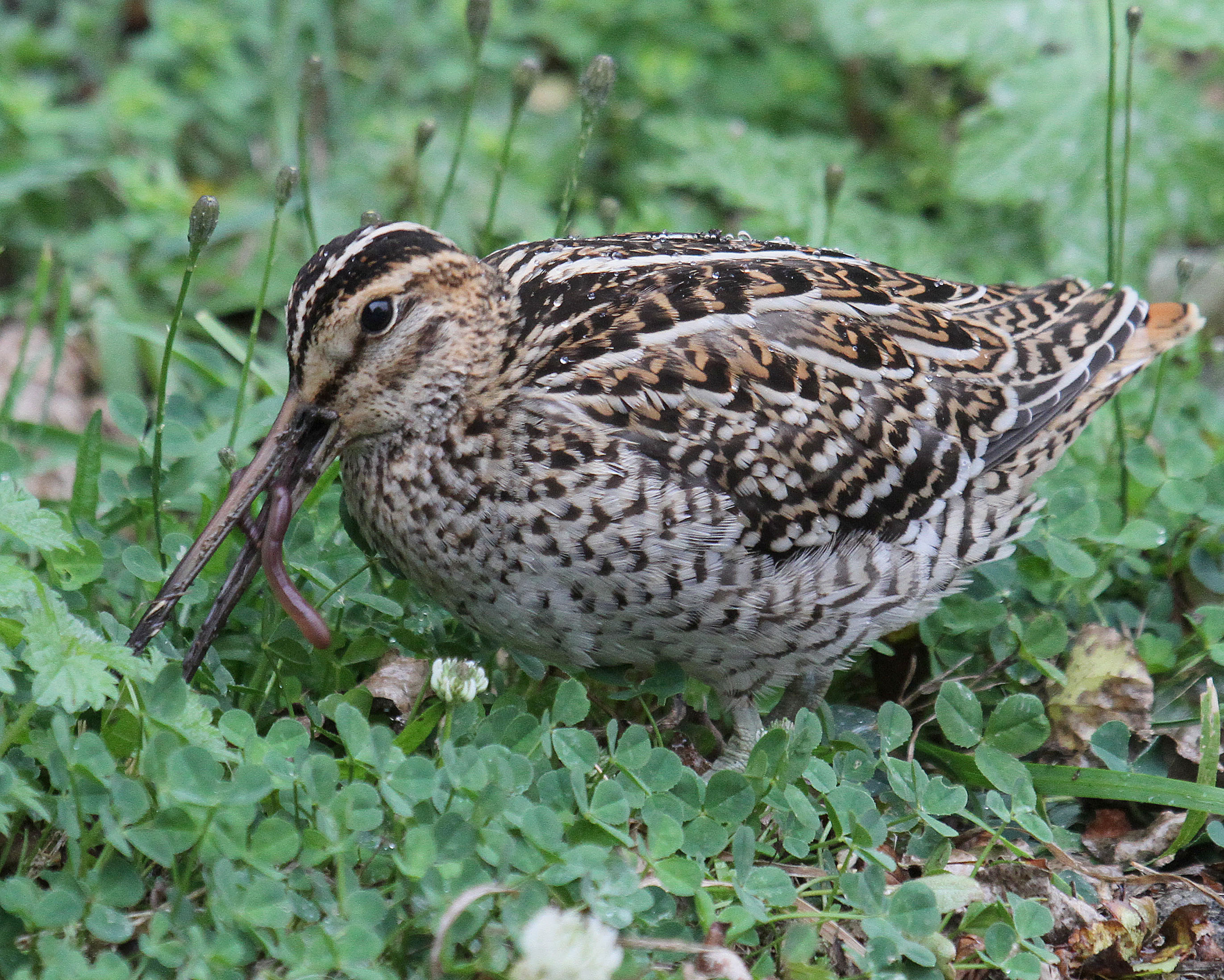 Great Snipe is a tricky species to twitch, primarily because it is difficult to see on the ground, leading to birds being elusive and difficult to track down. However, 'organised flushes' of birds at Holy Island, Northumberland, in May–June 2008 and at Speeton, East Yorkshire, in September 2008 allowed both these individuals to be widely twitched without the bird being unduly disturbed. Birders attempting to confirm the identification of a candidate Great Snipe, or indeed trying to see one on a twitch, should always consider the bird's welfare. 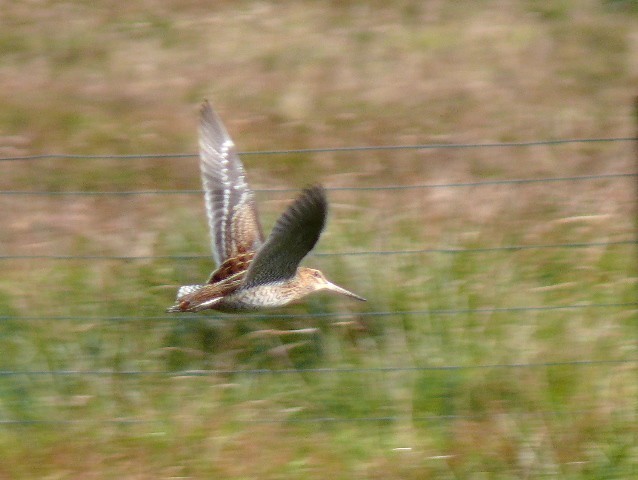 Figure 5. Great Snipe, Foula, Shetland. A more typical view of Great Snipe: even though the photo is not perfectly sharp, the key plumage features required to confirm the identification are visible. (Photo: Kris Gibb.)

Great Snipe might not be near the top of your targets when out searching for migrants this autumn, but knowledge of the key identification features and a willingness to search in the right habitat (and not just stick to bushes) gives every east coast birder a chance in the coming weeks. 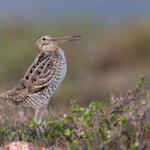