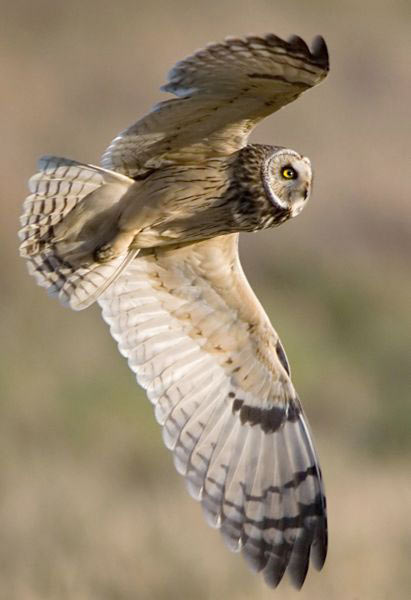 The two 'eared' owls, Long-eared Owl and Short-eared Owl, can brighten up any day in the field. Although neither is especially rare, this fascinating duo are sufficiently unusual to ensure that any encounter provides a notable entry in the notebook. Coastal watchers will be familiar with the sight of these fantastic birds coming 'in-off' on suitable autumn days, such immigration often involving both species. Inland observers can hope to encounter Short-eareds on patches of open ground, from set-aside to the upland fringes, whilst Long-eared Owls can be tricky to see away from their communal winter roost sites. During the breeding season, though they can be easier to hear, thanks to the booming call of the male and, later in the season, the distinctive squeaky call of juveniles.

The UK breeding population of the Long-eared Owl is put at between 1,600 and 5,400 pairs, but it is scarce in central and southwestern counties. This number is swelled in the winter months with the arrival of immigrants, but little is known of the bird's winter status, and many are undoubtedly overlooked at all seasons due to their secretive nature.

The UK breeding population of the Short-eared Owl is estimated at between 1,000 and 3,500 pairs, with this number boosted during the winter months due to the arrival of immigrants. Between 5,000 and 50,000 birds are thought to be present (Winter Atlas) in winter, though the upper estimate would appear to be optimistic for recent times! 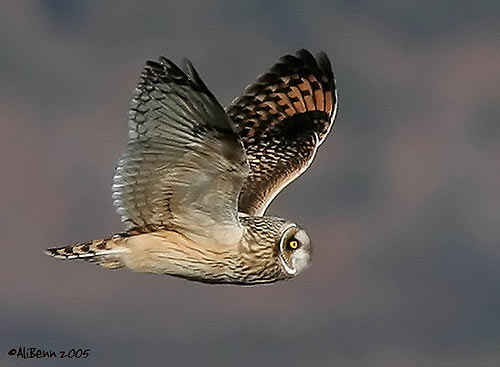 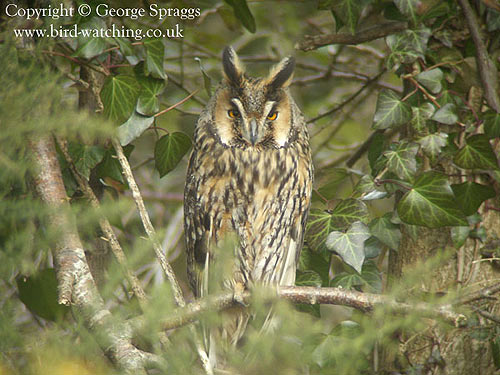 Long-eared Owl: Hampshire (photo: George Spraggs). Breeds from the Iberian Peninsula and the British Isles south to the Azores, Canary Islands and North Africa, and east from Scandinavia to Siberia, Japan and Korea. In North America, widely distributed south to Mexico. König et al. recognised three subspecies: nominate otus across much of range; canariensis in the Canary Islands is smaller and darker than the nominate race, and; wilsonianus in North America has a rufous facial disc, yellower eyes and more prominent underpart markings, with more distinct cross bars. Northern populations are largely migratory, though numbers vary from year to year. Ringing recoveries suggest that the vast majority of birds arriving in Britain and Ireland for the winter are from Fennoscandia, with smaller numbers from Russia and elsewhere in eastern Europe.

Long-eared Owls tend to be birds of the night, rarely hunting during the day except when they have young to feed. During the summer, they favour coniferous habitat or shelter belts, but also breed in deciduous woodland and are less particular about their breeding site than is often realised. Wherever they choose to nest, there is always open country nearby. On migration, though, they are frequently observed during the day in relatively exposed situations, often looking ill-at-ease attempting to camouflage themselves against a single windswept bush at a coastal promontory. During the winter months, they are communal roosters, often favouring dense bushes such as Hawthorns, located close to open habitat for hunting.

Short-eared Owls are much more the daytime species of the two. They favour open ground, be it moorland fringes in the summer or rough grassland in winter, though they can be found in a whole range of habitat regardless of time of year. Many observers will be more familiar with them during the winter months when they can often be watched quartering coastal marshes or open areas.

Given good views, identification of the pair is relatively straightforward at rest.

Long-eared Owl tends to be more upright in posture and the 'ear tufts', when erect, are more obvious; but beware of relaxed birds where the tufts can be barely visible. If the eyes are open, these are a fiery orange, and the warm-coloured facial shield makes for a 'softer' expression than Short-eared. On Long-eared there is also a black stripe between the eyes, which almost reaches the ear tufts and borders the white eyebrows. The underparts are evenly streaked. 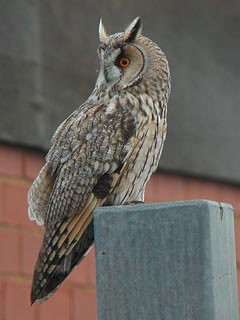 Long-eared Owl: Cleveland Migrants, such as this, can often be found in quite open conditions. Note the erect posture and tufts (photo: Ian Boustead).

Short-eared Owl tends to be more squat than Long-eared, with a neatly rounded head. The ear tufts are almost non-existent, except on alert birds but, even then, they are small and difficult to see. The eyes are yellow, surrounded by black patches set amid a pale face. The facial expression appears 'aggressive'. Plumage coloration tends to be yellower than Long-eared Owl. 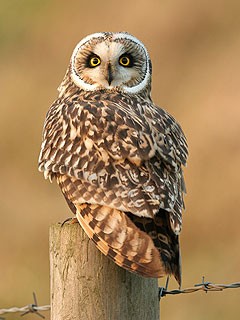 Identification of birds in flight

It is generally considered that separation of the two species in flight can be tricky. However, by remembering just a few features, identification of the two can be straightforward, as long as you get a decent view.

Given closer views there are several failsafe features to check for which can easily identify your quarry to one species or the other.

Please note that roosts of both Long-eared and Short-eared Owls are prone to disturbance, so please ensure that disturbance is kept to a minimum when visiting such sites.

Some of the photographers whose work is featured here have their own websites: