Focus On: Dotterel in springtime

Dotterel is among our most vibrant, photogenic and peculiar waders. Now very rare elsewhere in Britain as a breeding bird, it is one of Scotland's most iconic species, its image conjuring thoughts of windswept, rocky plateaux, most likely in the Cairngorms. On passage, however, it is just as content to pause in a lowland field as by the summit of a remote hill and the North African semi-desert wintering grounds of our population are far removed from the classic backdrop most commonly associated with the species. Literature has long insulted the bird, calling it a "fool" for its confiding nature, which made it something of a sitting target when it suffered from regular persecution from at least the Middle Ages until the early 20th century. Indeed, the bird's meat and feathers were once a sought-after commodity and the annual hunting of 'trips', as migrant flocks of Dotterel are known, in the spring became almost as much of a tradition as the gatherings of the keenly anticipated birds themselves. In fact, the birds gave their name to a Yorkshire inn and two halls in Cambridgeshire, both being counties which drew shooters from far and wide to join in the annual fest. Today, the bird's friendly nature makes it popular with birders as patient, responsible viewing is almost bound to result in memorable encounters and brilliant photographs. 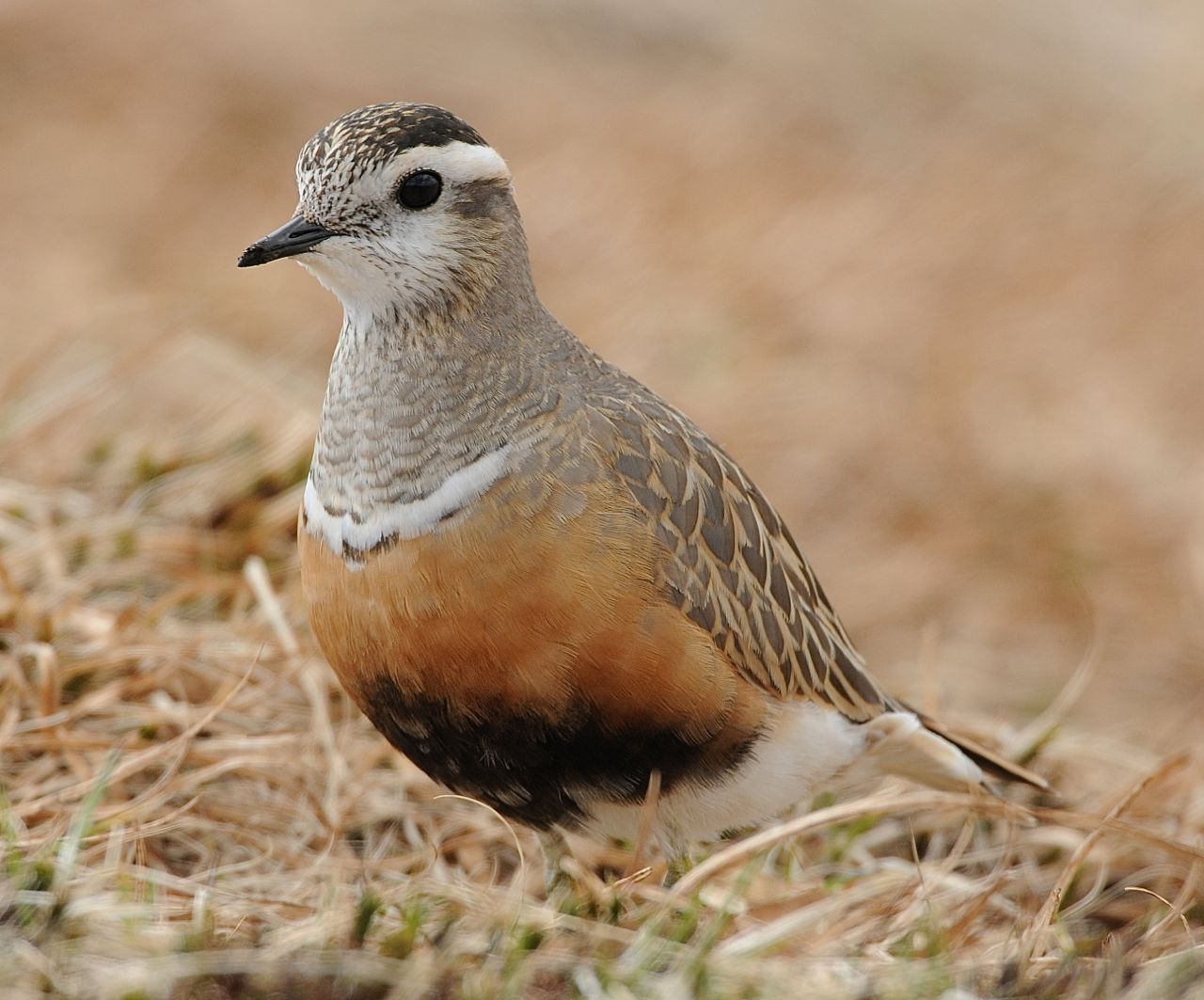 Sadly, the days when Dotterel was a widespread breeding bird of the uplands are long gone and spring trips do not occur on the same scale that they used to but they are no less dependable at some sites, occurring almost as though by the clock each year. Some sites are more regular than others but there is such a scattering of traditional locations across the country that you need not travel an inordinate distance to admire this plover famed for its effective reversal of the genders; the female assumes the executive role of establishing a territory and leading the courtship process while the male's primary responsibility is tending the young. In spring, Dotterel are best searched for in the last week of April and the first ten days of May, although birds are regularly seen in the weeks both before and after this period.

Arguably the best-known site for passage Dotterel is Pendle Hill (Lancashire), and for good reason. This high point west of the Pennines has a remarkable track record for attracting birds each spring and although numbers have not been as impressive in recent years, the chances of finding at least one near the summit in the peak passage period are very strong. North Yorkshire has two similar sites which reliably draw small numbers, Danby Beacon and Ingleborough; birds are sometimes present at the latter site in the last week of May. Gringley Carr (Nottinghamshire) has continued to receive small spring trips since 2000 but birds have not been present every year. 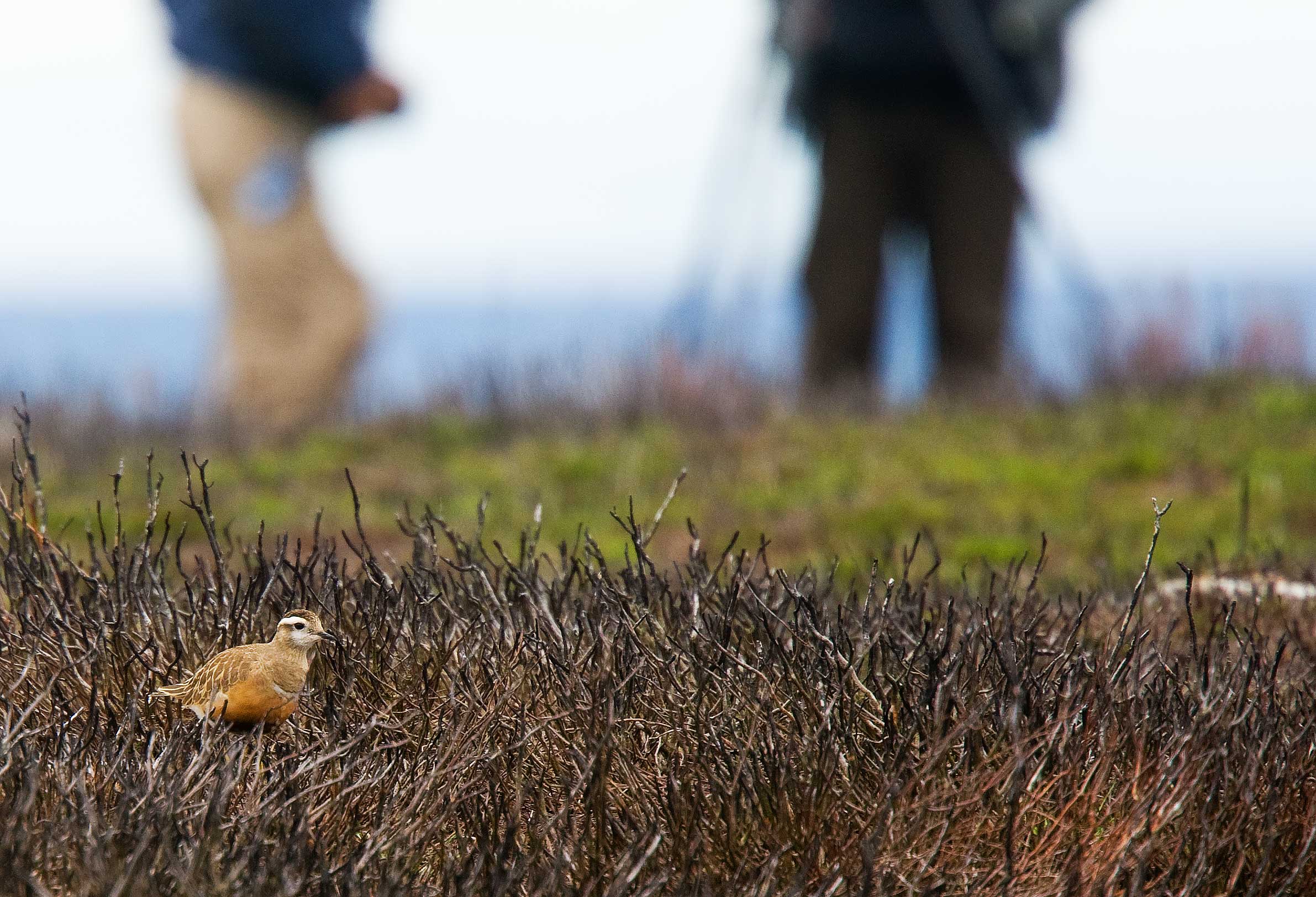 Away from the hills, Dotterel are also fond of feeding on arable land, finding pea fields especially alluring. The area of East/South Yorkshire around Swinefleet has turned up a number of spring records over recent years with Adlingfleet, Ellerton, Marr, North Cave, North Newbald, Reedness, Whitgift, and Swinefleet itself sharing a glut of records since 2000. There is little consistency from year to year, though, other than the fact that most birds use pea fields.

Further south, the farmland around Ashwell (Hertfordshire) has been favoured historically by Dotterel and some considerable trips have been found in the past, but sightings have been patchy recently; it's still an area worth checking, though, as sporadic records have continued since the turn of the millennium, suggesting that searches of suitable fields may still produce. Migrants regularly turn up in fields near the south coast but are often difficult to predict. The rolling Sussex Downs have a history of hosting trips, with areas such as Balsdean especially likely while Rye Harbour can be credited for a good run of records. 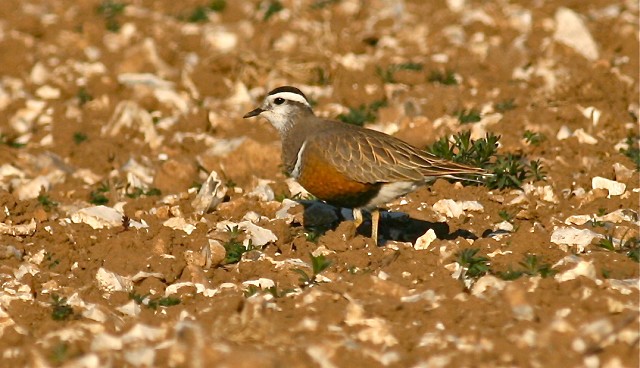 A female Dotterel at Cheesefoot Head (Hants) in early May 2011 (Photo: Lee Cooper)

Although more reliable in autumn, the fields, downs and airstrips of Cornwall and the Isles of Scilly stand a reasonable chance of luring trips from mid-April to mid-May. In Cornwall, Davidstow Airfield might be particularly worth a check along with the Porthgwarra and Sennen areas and, on Scilly, Chapel Down (St Martin's) and Shipman Down (Bryher) have acted as pit stops for spring Dotterel in recent years but other open areas such as the airfield on St Mary's and Wingletang Down on St Agnes are also likely.

Among the best Welsh sites is the Great Orme headland (Conwy), where the limestone pavements seem especially enticing to the species, while the area near the summit of Garreg Lwyd (Carmarthenshire) is also likely to reap rewards. Elsewhere in Wales, Plynlimon (Ceredigion), Foel Fras (Gwynedd), Foel Grach and Drum (Conwy), The Range RSPB (Angelsey) and Cefn Cadlan (Glamorgan) have been treated to multiple records of late and a visit may well pay off. 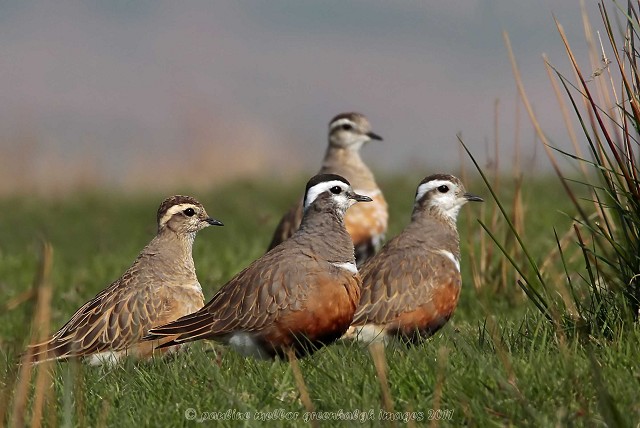 A riot of colour: a trip of four Dotterel in Lancashire, late April 2011 (Photo: Pauline Greenhalgh)

Just about any field in suitable condition on the north Norfolk coast could provide respite to a spring Dotterel trip with the stretch between Happisburgh and Hemsby as good as anywhere, especially around Waxham, while the coast between Holme-next-the-Sea and Cromer also turns out spring reports on a regular basis, especially around Choseley Drying Barns. Narrowing your search to pea and beet fields might just give you the best chance of success. Interestingly, nearby Suffolk has enjoyed very few spring records since 2000 in comparison, although birds have turned up at Kessingland and Landguard. The relics of the celebrated traditional spring trips of Cambridgeshire have continued over the last few years, with the pea fields of Chatteris, Black Bush and Whittlesey holding numbers sometimes reaching double figures.

There are a handful of dependable sites in Scotland for spring Dotterel away from breeding areas; the birds tend to reach this far north a little later on, with the earliest arrivals normally seen in the last few days of April. Most notable are Blackcraig Hill (Ayrshire) and Carnethy Hill (Lothian), while Loch of Strathbeg and the surrounding fields (Aberdeenshire) have attracted a good number of birds, including trips of 30 in 2004 and 29 in 2010. Other sites with multiple, but intermittent, records include Lowther Hill and Tinto (Clyde), Scald Law (Lothian) and Broad Law (Borders), while many of the Scottish islands have been graced by northbound Dotterel, some of which are presumably bound for the mountains of Norway or beyond and there is surely a good deal of potential for finding refuelling birds in the fields of Orkney, Shetland and the Outer Hebrides.

While there are a number of sites with a long history of attracting Dotterel, tired birds are not all that fussy and will drop down if they come across a suitable open area to feed for a while, sometimes a number of days, before continuing their migration. They can sometimes turn up completely unexpectedly where they have never been before so it's worth keeping an open mind, as I found when a stunning group of 15 called in at a stubble field on my patch near Banstead (Surrey) on the classic date of 4 May 2012, providing Surrey with its first record since 1884! It's especially worth keeping an eye out for Dotterel along the south coast, where they can appear seemingly randomly and stray single birds often get mixed in with Golden Plovers so it might pay dividends to scan through any flocks that you encounter. Dotterel are one of the absolute star birds of any spring and always a fantastic find, so keep scanning those fields and scouring the summits and you might just score!

Dotterel are generally quite site specific, but occasionally spring 'trips' will pitch down in unusual places — these, found by the author, were the first in Surrey for 128 years (photo: David Campbell).