To guide island-based seabird conservation actions, a new peer-reviewed paper has been published in the journal Conservation Biology. The paper identifies, for the first time ever, every single island and islet worldwide where globally threatened seabirds breed, as well as whether invasive alien species are present and threatening them.

Seabirds are some of the most threatened marine animals in the world, with 29 per cent of species at risk of extinction. Significant threats to seabirds occur on islands where they breed, including predation and disturbance from invasive alien species such as rats, cats and pigs. However, in many cases, effective island conservation can mitigate these threats. Dena R Spatz, first author on the paper and graduate student at the University of California, Santa Cruz, commented: "Thanks to hundreds of collaborations from seabird biologists around the world, we were able to compile a global database that identifies islands where threatened seabirds are vulnerable to extinction. The Threatened Island Biodiversity database also highlights islands where invasive species eradications are needed or where protected areas are missing." 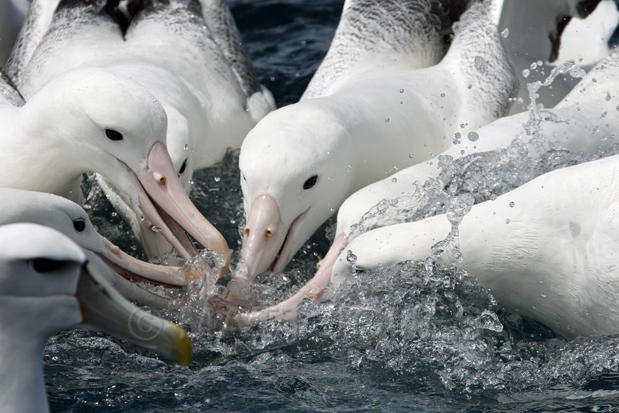 Albatrosses, such as these Southern Royal Albatross, are some of the most endangered seabirds on the planet (Photo: Matt Jones)

The paper, The Biogeography of Globally Threatened Seabirds and Island Conservation Opportunities, written by scientists from the Coastal Conservation Action Lab at the University of California, Island Conservation, and BirdLife International, identified all islands where populations of the 98 globally threatened seabird species (as classified by BirdLife International on the International Union for Conservation of Nature Red List) now remain, and documented the presence of threatening invasive species, protected areas and human populations. This list was then refined to identify islands that have the greatest opportunity for interventions to benefit threatened seabirds. It will now form the basis of further priority-setting to determine where action is most urgently needed.

Nick Holmes, Director of Science at Island Conservation, said: "This information is critical to guiding where to prevent threatened seabird extinctions, and is a rare opportunity for effective conservation at scale." Co-author Dr Stuart Butchart, Head of Science at BirdLife International, added: "Invasive alien species like rats cause significant economic damage and harm to people too, but on islands it is often feasible to eradicate invasive species, benefiting local communities as well as native wildlife."

This research was funded by the David and Lucile Packard Foundation, the National Fish and Wildlife Foundation, Island Conservation, the Friends of Long Marine Lab, and Dr Earl H Myers and Ethel M Myers Oceanographic and Marine Biology Trust.

The full paper can be viewed at http://bio.research.ucsc.edu/people/croll/pdf/Spatz_2014.pdf