Fate or free will?

In my previous article I attempted to convince readers that there was more to rare birds than a lot of people think. I did my best to explain the prickly issues of birds' mental health, genetic determinism and fast-moving Atlantic depressions. I suppose this is not totally fair to the birds, implying they are merely impartial 'pawns' in a bigger 'game'.

There are many studies that show birds are capable of making decisions: they are good at knowing where they are in the world, capable of re-orientating when displaced, and can fine-tune their migrations to arrive at the same place at the same time, year after year. My local Common Whitethroat, which returns to the same bridge in London every year (I know this because it is ringed), would surely protest at being written off as a pawn of fate. Birds are clearly capable of navigating, and many studies show that they 'consciously explore'. Genetic determinism and conscious manipulation are the two engines that drive things along. 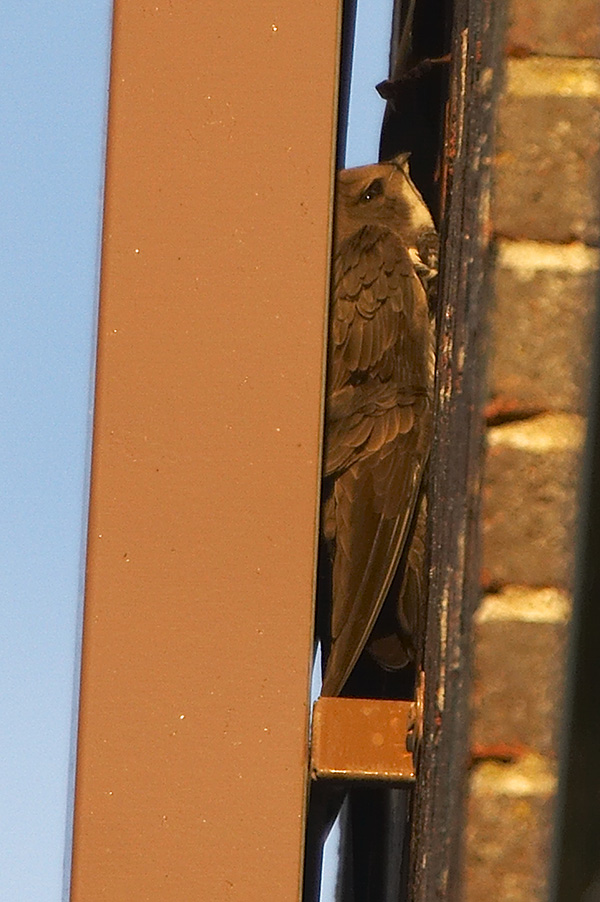 Vagrants can turn up in the strangest of places. This 'overshooting' Alpine Swift has sought a safe resting place in the closest thing it can find to a mountain crevice in Seaton, Devon: a gap behind a duct on a block of flats. (Howard Bottrell, www.ecovisuals.com).

Many birds competing for territories will go 'house hunting': they have a good look round for somewhere to build a nest and raise young. In a crowded environment, birds may be

displaced outside the main breeding area. This is a conscious vagrancy process and expands the range of a species.Sometimes the degree of these exploratory movements can be extreme. Late spring in Britain is a good time for extreme vagrants (think Blue-cheeked Bee-eater and Pallas's Sandgrouse) and also a time for more familiar birds such as Red-footed Falcon and European Bee-eater. Perhaps the last two species, often first-summer individuals, are on 'walk-abouts' – having a good look around and collecting information about their world. This pre-breeding 'backpacker'-type trip could help them get a perspective on things.

Another type of vagrancy is known as abmigration. Birds pair up with members of another population and one follows the other one to its home. Abmigration is detectable through ringing studies, but it is particularly noticeable when two individuals of a different species connect with another group. Vagrant Canada Geese often get caught up with flocks of regular migrant Greenland White-fronted or Barnacle Geese. These birds meet in breeding areas and every now and then they tag on to the wrong group or pair. Snow, Ross's and Red-breasted Geese are all noticeable examples of such vagrant birds in Britain.

Presumably other species abmigrate, too, though it may be more difficult to tell as some birds form flocks only when migrating and then disperse when at their destination. I suppose a Naumann's Thrush found among winter Redwings in London qualifies as an abmigrant.

Stepping stones in the ocean

The importance of man-made influences on vagrancy is well appreciated. The ocean is criss-crossed by shipping routes and installations. I used to work on offshore oil platforms and migrants were so regular that a couple of times I had lingering Peregrine Falcon or Long-eared Owl surviving off the 'fast food' of regularly arriving migrants. Anyone who has done a Bay of Biscay ferry trip will know that ships provide a regular stopping-off place for migrants. Presumably these are lifelines out there in the ocean. Ship assistance ranges from birds just coming in for a rest before flying off again to those that hop on at New York and hop off as they pass Scilly.

An oiled Snowy Owl that turned up in Suffolk several years ago had apparently been seen along with tens of others on a ship in Canadian waters. While the others flew off at various points, one owl opted to hitch a ride all the way to East Anglia.

The spoils of exploring

Most exploration is risky. It is often futile and fruitless, and for vagrant birds it can end in a number of ways. Death awaits many, especially so-called extreme vagrants. Yellow-billed Cuckoo, Ovenbird, Cream-coloured Courser and Common Nighthawk dropping dead on Scilly are well-known examples of what can await transatlantic vagrants when they finally reach terra firma. However, the risks vagrants are exposed to are related to the distances and terrain they are trying to cover, and at the other end of the vagrancy spectrum some birds are only slightly out of range and stand a much better chance of survival.

Islands all around the world are known for their endemic species. Some islands are remote and have never been connected to land masses. Most species endemic to remote oceanic islands have arrived as vagrants at some point. Once on their respective island, they have somehow managed to lose their migratory urge during the colonisation process. For obvious reasons, a small flock of vagrants is more likely to achieve this successfully than a lone individual. These colonists are effectively genetically isolated and are likely to begin a unique evolutionary future: in time they will diverge, first into new races, and eventually into new species. So, in addition to being a driving force behind the evolution of migration systems and species' ranges, rare birds are also instrumental in the speciation process. 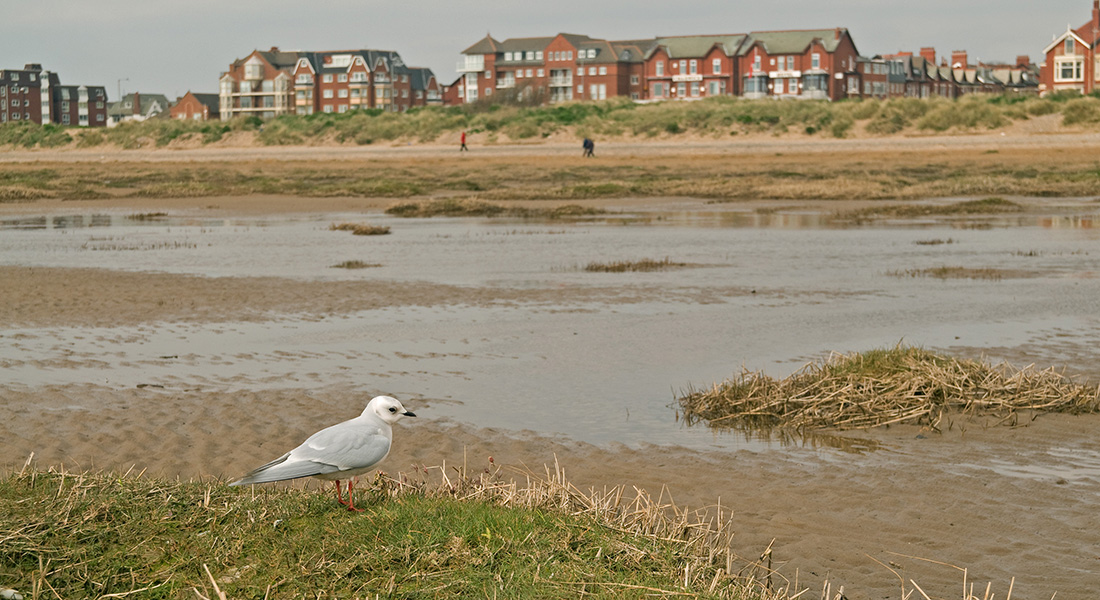 Ross's Gull usually winters close to its high Arctic breeding grounds. By whatever means, this intrepid 'pioneer' made it south to Fairhaven, Lancashire. It was subsequently found dead (Steve Young, www.birdsonfilm.com).

As previously discussed, a blizzard of migration 'experiments' is being played out at any one time, but only some of these experiments persist to be replicated in future generations. It is a trial-and-error process. The three main aspects of a migrant's life – breeding, migration and wintering – are all affected in this experimental process.

If a small group of birds or an individual sets off in an anomalous direction and just happens to stumble across a successful migratory route, they might survive to return to their natal areas the next year and reproduce. If that programme is replicated in at least some of their offspring this population will grow. And if the process continues, a new thread in the migration web will be woven.

I imagine this process is frequently very short-lived and often leads to failed migration routes that die out quickly over time. For example, it looked as though Ring-billed Gulls were colonising Britain several years ago, although in recent years that process seems to have slowed down.

It now appears there are many more Ring-billed Gulls in Portugal, for example, and the species has certainly already colonised the Azores. Each winter, a group of up to 50 birds can be seen on a particular beach on these Atlantic islands, where the birds have successfully found a new wintering area.

While such small founding populations are highly vulnerable, some do take root. Little Egrets in Britain are a good example. Similarly, new migration routes can become established: Yellow-browed and Pallas's Warblers and Pectoral Sandpipers are all now regular autumn migrants to Britain. Not all vagrants are going to change the world, however. The Glaucous-winged Gull that set off from the Pacific coast of North America and headed to Beddington Sewage Farm in London (my local patch), after stopping off first in the west country, did not have much chance of staging a solo conquest of Europe for its species. Such an extreme vagrant is at the limits of a wider strategy that works overall. Birds like this are very unlikely to contribute anything to the demographics of their species.

Death awaits many long-distance migrants. These birds were found on a ship after a storm in the Caribbean – they won't be forging new migration routes (Simon Cook).

Where does that leave us?

As I write this I am sitting in an Arizona canyon, looking for a Tufted Flycatcher, the fourth US record of this Mexican vagrant. The flycatcher is probably an overshoot, pushed north of its range by a stiff tail-wind. Maybe this is just a oneoff; but perhaps there will be a spate of records and this might precede an expansion of this species' range into the United States.

On the other hand, the bird could be dead by the morning. Who knows? Is it diseased or has it got an internal 'program' that brought it here? Did it abmigrate with other migrants it teamed up with further south? Whatever the reasons, this Northern Tufted Flycatcher is outside its comfort zone: it is an explorer of what lies beyond its range.

Maybe vagrants are just curious accidents, the subjects of twitchers' benign curiosity. However, I consider them to be intrepid explorers, pioneers and risk-takers – creatures that have overcome the odds to survive. These often tiny birds are capable of starting huge long-term changes in the ecology of their species.

However, there is another side to it. Not all players in the vagrancy game command such lofty admiration. It could be pity, or empathy, that arouses my curiosity. Maybe they are just crazed, deluded, deranged individuals, following an internal urge to reach their goal – which in most other cases is much tougher than the alternatives. Why do some Black-headed Gulls winter on the Azores when they could spend the winter in mainland Europe? The achievements of such individuals are nonetheless admirable: they do what they want and have a go, no matter how poor the odds.

They are at least different. And who knows, one day the northern hemisphere may be plunged into a sudden ice age and some of the only Black-headed Gulls to survive might be those in the Azores. In some ways it would be nature's way of having a back-up plan. The story of vagrancy, therefore, is a microcosm of life in general. It is a story of an apparent direction, purpose and plan, which seems to emerge from the directionless discomfort and confusion of individual organisms – something to which all creatures on this peculiar planet can relate.

Many people have influenced and helped with this article. Not all share my views, and some oppose them. My main objective has been to stimulate discussion and debate. For more information on vagrancy, vagrancy thinkers and references, see www.peteralfreybirdingnotebook.blogspot.com. 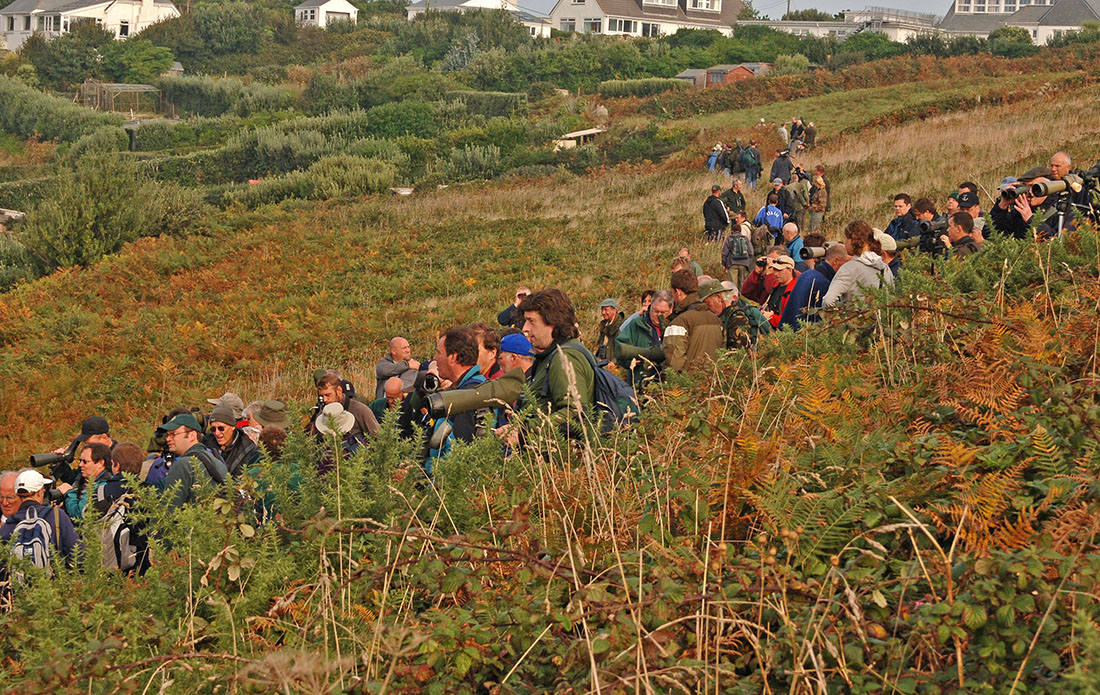 Birders scour a bracken-clad slope on Scilly for a Paddyfield Warbler, a vagrant from Asia. Species from all points of the compass cross paths on these isolated vagrancy 'junctions' (Steve Young, www.birdsonfilm.com).