March is a time of great change here. The Cranes have left the fast-drying rice fields, leaving them eerily quiet after the raucous winter squabbles that could be heard for miles. As there is little water there now, the waders too are thinking of leaving for pastures new. It's only when you manage to find a still-wet field amongst the myriad dry, ploughed hectares that you realise just what is still left, with everything crammed into the same space making a splendid spectacle. One field, for example, with barely a skim of water, held: 300 Ruff coming into summer plumage, with some very white-headed males; 200 Spotted Redshank, looking very blotchy as the darker summer feathers were sneaking through; 100 Greenshank; 50 Dunlin; 20 Little Stint; 20 Black-winged Stilt; 20 Black-tailed Godwit; 10 Wood Sandpipers; two Curlew, a very rare passage bird here; two Spoonbill; and two gorgeous summer-plumaged male Garganey. Covering the fringes of the water were literally hundreds of Water Pipits, all appearing completely different through varying stages of moult, and rubbing shoulders with at least three races of Yellow Wagtail: flava, flavissima and iberiae. Many "Vs" of Cormorant have been passing overhead, some reaching over 100 birds, looking for somewhere cooler as the water heats up rapidly. At least the fish will get a breather here for a while. The waterfowl numbers on the large reservoirs are slowly decreasing, though 42 Garganey mid-month was a sight I have not experienced before; three quarters were males. 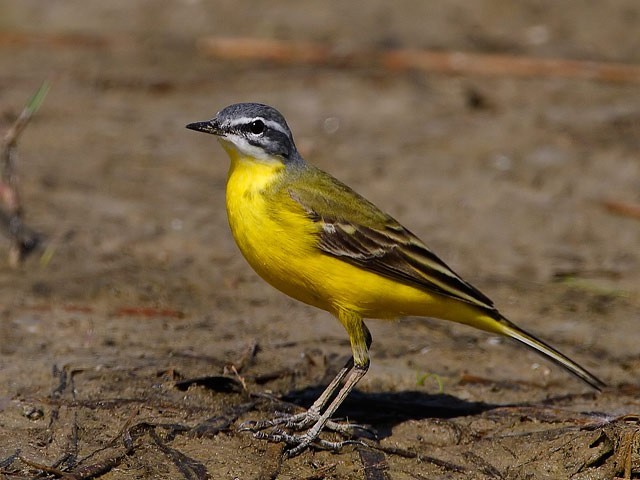 Migrants have been coming through thick and fast, making me stop and cock an ear to songs and calls I haven't heard for six months. I'm having to refresh my memory from BWPi for the more subtle differences in the sounds of very similar species. Last week I heard a call very similar to one I hear every day here, but with a slightly refined accent. When the perpetrator flew across in front of me, it was indeed a Sardinian Warbler, but when it was followed by a stunning male Subalpine Warbler, the brain clicked in to gear, and logged it for future use. Maybe the Sardinian Warbler was acting as a mentor for the Subalpine, as it was being followed diligently everywhere it went —  even to the extent of being watched as it performed its display flight from the top of a bush. The Subalpine Warbler must also have been accompanied on the journey north by his partner, as I had a few glimpses of her skulking in the undergrowth too.

Among the first arrivals this month are the Lesser Kestrels. With temperatures already touching 28° they must feel at home instantly. They wheel around the blue skies calling, and claiming nest sites under old roof tiles, mostly amicably — although the odd fracas takes place as a female tries to muscle in another's territory, usually to be chased off by the male. As the weather has been so good (March can be very variable), a lot of the migrants have been streaming through without stopping, using every minute of available daylight to speed north. You can sometimes see a whole flock of migrants one evening, and then not see the same species for a few weeks. I have a theory about this; not based on any science, but purely on my own observations. I think that, possibly, the first rush of a particular species are migrants that will be spending the summer further north, so stop here to roost before carrying on. Then the same species migrants that will be summering here don't arrive until a few weeks later, as they don't have to leave their wintering grounds so soon, not having so far to travel. Last week, for example, I had a flock of 20 Bee-eaters fly over, but won't expect to see another until next week. 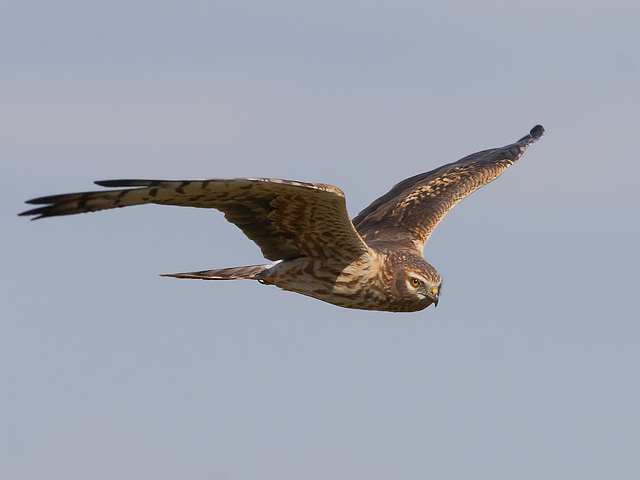 It is not unusual to see several species of migrant on the same day. Yesterday, for example, I had four new species for the year: Northern Wheatear, Black-eared Wheatear, Short-toed Lark and Common Swift. I was out on the steppe, watching Montagu's Harriers, so I would imagine many more arrived in other habitats too. We have had a few days of cooler northwesterly winds, holding back the flood. However, that all reverted to normal southerlies yesterday and I would expect to see a lot more new arrivals this week. A surprising addition to my year-list followed a call from my friend Colin, to say he had a fleeting glimpse of a grey Little Egret at Arrocampo. So off I went, bright and early the next morning, and there it was, right where he had reported it flying into the reeds. I managed to get some record shots, and sent them to the Spanish experts, Javier Prieta and John Muddeman, who then reported back that it was a cross between Egretta garzetta and gularis, Little Egret and Western Reef Heron — so that was a new bird for me, and very pretty it was too! Also seen that day were a lingering male Bluethroat, Purple Heron, Spoonbill, Osprey, two Spotted Crakes fighting, five more Garganey, five Squacco Herons and a male Little Bittern chasing the female around the reedbed, disturbing the Purple Gallinules. The gallinules appear to have a second brood already, as I spotted a nest with two tiny heads peeping out, and then the chicks being fed with delicious reed shoots. 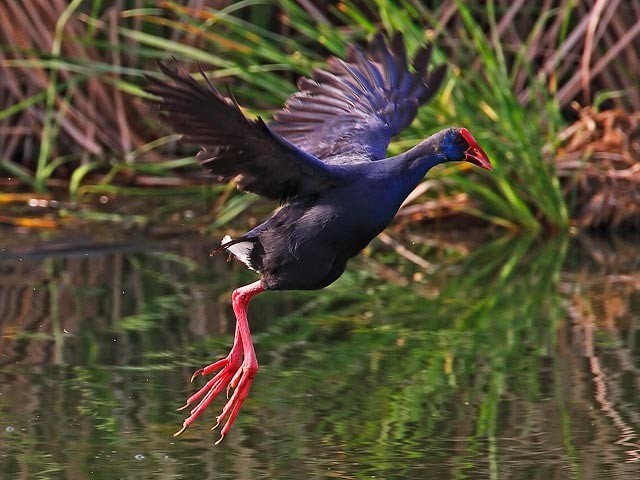 The familiar reeling call of Savi's Warbler was heard, but on anything but very still days they keep to the bottom of the reeds and sing, and will not venture to the top for good views. Competing with them were both Reed and Great Reed Warblers, but again I saw neither, even though they were very close. The Montagu's Harriers are now well settled in their breeding fields, although one community have moved a few kilometres as their usual nuptial site has been recently ploughed, with no cover for them. A juvenile Spanish Imperial Eagle was watched as it displayed over the site of seven breeding pairs, intermingling with the Monty's before being seen off by the feisty males, eager to show their prowess to the watching females.

Photographic opportunities abound, from the many roads and tracks that criss-cross the area, but the increasing heat haze means early starts now. By mid-morning it is too bad for anything but watching the antics of the birds, which in itself is a wonderful way to spend a day. Raptor-wise it is a fairly quiet month, purely as half the population are sitting on eggs, or brooding young, keeping the adult males busy bringing food. On the subject of food, the vultures have been suffering from a lack of regular meals, due to EU regulations governing the disposal of animal carcasses. Farmers are no longer allowed to leave a dead animal in the field; it has to be disposed of "correctly" according to the many trivial laws they impose. Consequently, vultures are now frequenting rubbish tips in their quest for food. For centuries, dead animals have been left where they lay, and within hours all that is left is bones to be scoured by the sun. All is not lost though: apparently the Spanish government is now going to repeal the law, enabling the status quo to be reinstated. 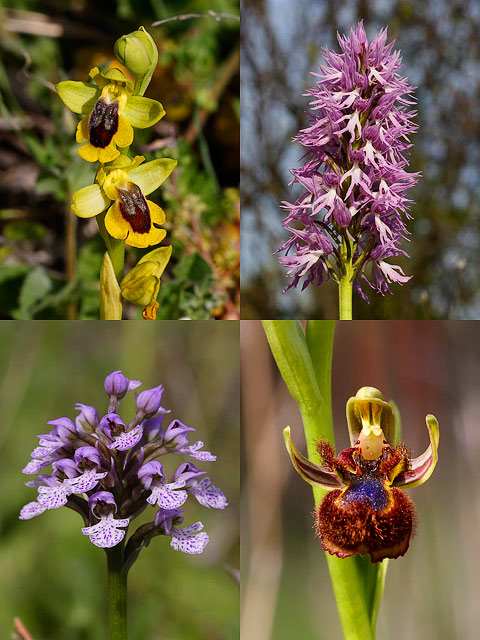 Last month I mentioned not only the birds, but the flowers here. Now is the time that the vast expanses of blooms cover the whole countryside. Where the ground has been grazed by sheep, leaving the grass cover at a minimum, the whole area is now pink, with the tiniest of Common Stork's-bill, Sand Crocus and Barbary Nut. The steppe is now yellow, and the higher areas have Spanish White Broom, Cistus, Spurge, Spanish Lupins and Lavender absolutely everywhere. Even the trees in the dehesa are now yellow: the Holm Oaks are bursting with small yellow catkin-like fronds. But the speciality is the orchids. I am no expert, but I found seven species in one olive grove, and a few days later, John Muddeman, who is an expert, found nine species in the same grove. Mirror Orchids are very rare, but can be found fairly easily here.