Firstly, apologies to anyone who missed the July article. To be perfectly honest, there is not enough going on here in July for me to write about. Exceedingly high temperatures of 40°+ put the mockers on any movement of birds in all but the first and last hours of the day. The lack of any rain since February means even the usual watering holes have long been dry, making finding birds even harder.

August is a different prospect, and although temperatures are still in the high 30s (and even reached 43° for a week in the middle) there are far more comings and goings to make even short forays worthwhile. It does mean leaving home an hour before sunrise to arrive at my search area before dawn. Driving in the dark has its bonuses, usually seeing the local Barn Owl out hunting and discovering others in places I didn't know supported them. I also come across Red-necked Nightjars either sitting on the road surface or in their strange flight looking for moths in the fields next to the road. Their call appears to have changed since the days of courting, and instead of the usual "ka-tock", sounding like something generated by a computer, they now only seem to be using the last syllable. 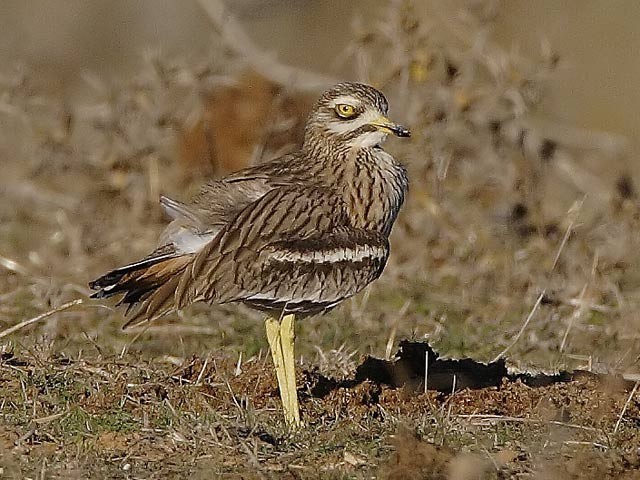 Stopping at known sites, I can stop and listen to the eerie calls of the Stone Curlews. Spotting them is even more difficult now, as a well-known, easily viewable daytime roost for about 60 birds has now been earmarked for a solar farm. The disturbance has caused them to move to pastures new, as yet undiscovered by me. My local Black-shouldered Kite pair has successfully fledged three young that have already been driven off to find their own hunting grounds. The feisty male is still seeing off intruders, including a juvenile Marsh Harrier, whilst his partner looks on uninterestedly from a nearby tree. 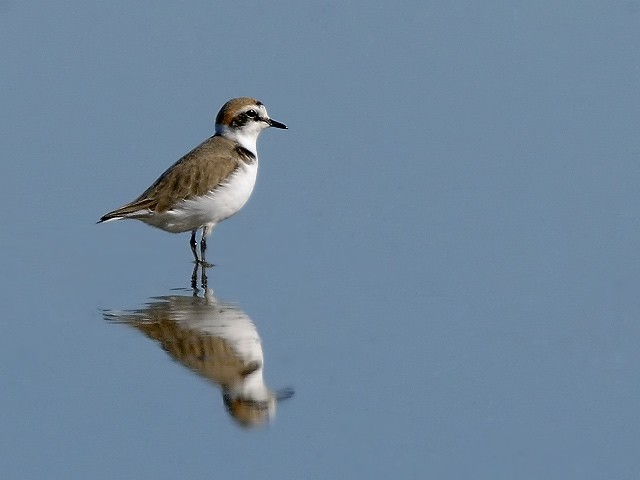 Certain days in the rice fields can produce incredible numbers of waders, with other days finding nothing at all. This indicates quite a strong passage, the birds only stopping to refuel before carrying on south the next day. One typical day of good passage included 100+ Lapwings, 400+ Black-winged Stilts, 200+ Little Egrets, 10 Sanderlings, 9 Temminck's Stints, 6 Dunlin, 12 Wood Sandpipers, 50+ Black-tailed Godwits, and a very rare bird for here, a Turnstone. The resident Little Ringed Plovers have done exceptionally well rearing young this year: juveniles seem to be everywhere. The prolonged dry spell suited Collared Pratincoles and Kentish Plovers very well, the latter raising young for the second year running in Extremadura.

My local lake hasn't fared so well. At the beginning of the year it was 15 hectares (37 acres), with a small island and three large eucalyptus trees, holding Black Kite and Golden Oriole nests. Now there is not one drop of water there, just cracked mud littered with dead Carp skeletons. Apparently the local council are going to deepen it this year, to give more capacity. Let's hope they leave some shallows for me to watch the wintering Snipe, Ruff, sandpipers and Kingfishers. I can only hope they will also restock the fish so the resident Otters will also return when it is completed. Sadly the sight of an adult laying dead in the road miles from any water, having been hit by a car, is not a good omen. 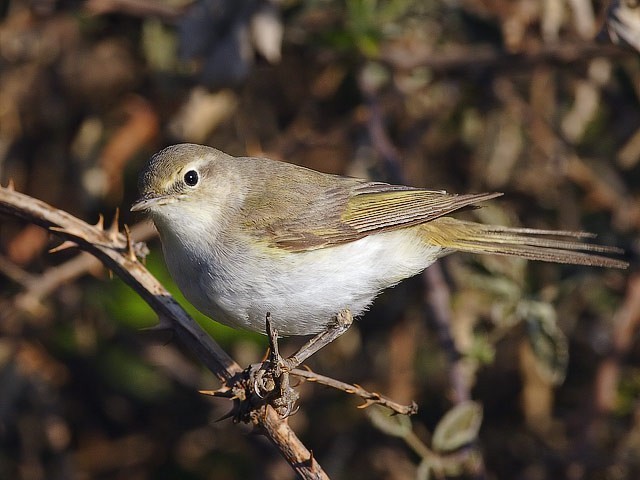 Warblers are coming through thick and fast now. An hour spent by a stream holding a few pools of water produced 29 species coming to drink and bathe, including Garden, Bonelli's, Willow, Subalpine, Melodious and Sardinian Warblers, Whitethroat, Hawfinch, Woodlark and Rock Sparrow. A Southern Grey Shrike was very close indeed! It sat on a bramble bush with a dead juvenile Blue Tit in its bill, looking as if it was about to impale it on a thorn. It didn't give a good photo opportunity as I could only see it through a small opening in the side of my hide and it flew off into a tree — still, next time perhaps. 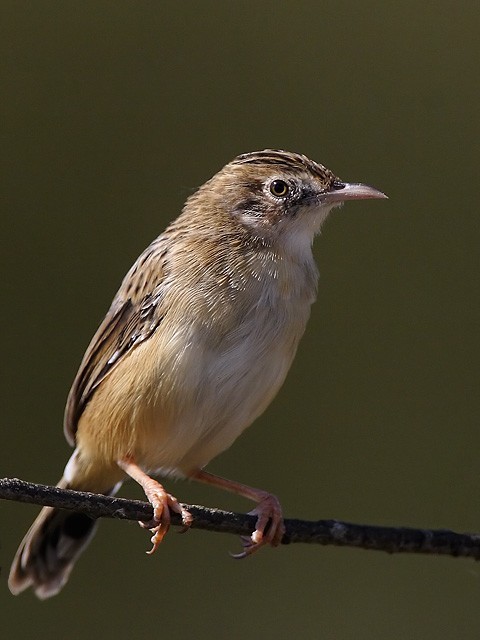 Another early-morning visit a couple of days ago produced three fighting Cetti's Warblers in a small tamarisk tree, giving exceptionally close views. The victor climbed to the top and blasted forth his call. I also noted a very late Nightingale, Sedge, Reed, and Willow Warbler, and literally hundreds of Zitting Cisticolas. The area is renowned for these diminutive warblers, but I've never seen so many in such a short space of time, again indicating a strong passage of birds. Accompanying them were many juvenile Yellow Wagtails, but no adults. They seem to come south a lot later, October being the best month for them. The biggest surprise of the day was a gorgeous male Bluethroat sitting on top of a willow. We get lots here in winter, but I have not seen one at the end of August before. A strange warbler in close proximity to the Bluethroat had me flummoxed; the only bird I can identify it as is an Olivaceous Warbler. Whilst this is not out of the question, it's certainly a rarity here. Unfortunately, I would never call myself an expert and as I didn't get a photo it will remain unticked, and be another mystery bird. 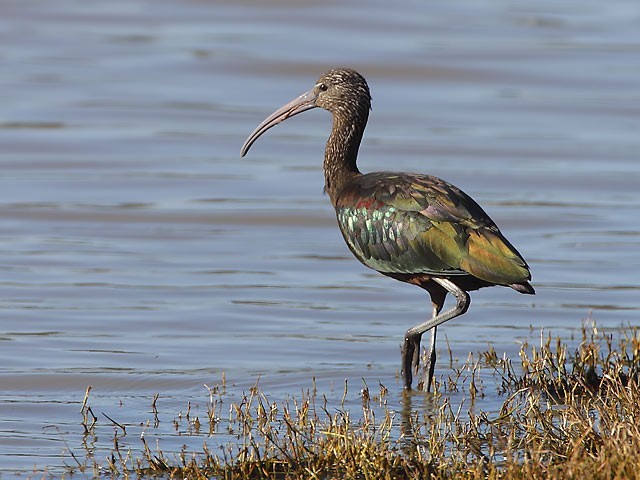 On the way home I found a Glossy Ibis, in the same field as seven were present last year. It's strange how they return to exactly the same place with thousands of hectares to choose from. Wrynecks have been arriving in droves but, as regular readers will know, they are my bogey bird. Photographing them is a waste of time for me, I would be far better using my time by plaiting water! 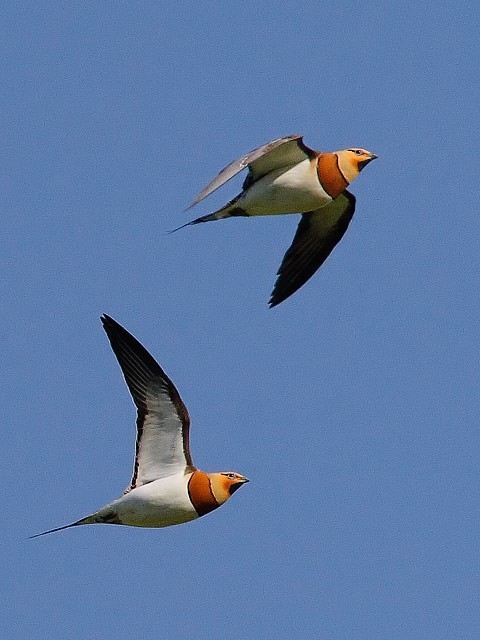 I don't know why but this year I have seen far more Black-bellied Sandgrouse than previous years. It may be due to the dryness but, when I visit a certain spot, there are always about 20 flying around. There are approximately 10 times more Pin-tailed Sandgrouse than Black-bellied here in Extremadura, so spotting the more cryptic Black-bellies is always a great pleasure. Watching 25 land for a drink was a real bonus, even if it was through a scope.

Late August is when the Red Avadavats are in full breeding colours, ready for their October nesting. The males are an incredible red, flitting around gathering feathers to line their nests. They are a tiny bird with a lolloping flight, and often the huge feathers they are carrying can be spotted way before seeing the bird hidden by it. This makes it easy for me to follow them to their nest site and I would imagine it makes it just as easy for predators to do the same. 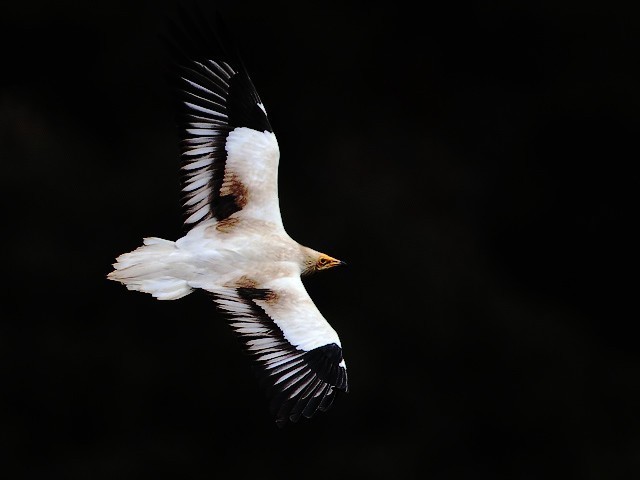 August is a slow time for raptors, with most of the Black Kites having left and only a few of the replacement Red Kites having arrived. The only ones sighted so far seem to be in small groups slowly drifting south. This year there have been quite a few juvenile Egyptian Vultures, which bodes well for the future as they were getting fairly scarce. I suppose they regulate their reproduction according to available food sources. As they are not a bird seen every day the heart sometimes misses a beat when one is sighted; only when the wedge-shaped tail can be seen can verification be made at any distance.

The big reservoirs are still fairly empty, with only a few hundred Mallards and Great Crested Grebes as yet, but that should change soon and I'm predicting a few Ospreys in the next week or so. There has been a flock of about 12 Great Bustards in the same field just outside the village for over a week now, but they have to be one of the sneakiest birds around. They hang around on a rise in the ground giving them a good viewpoint, so getting close to them is a real pain. The only remedy is to put a hide up and leave it for a week for them to get used to it, and hope they are still there when I go to try to photograph them. However, the hide usually gets destroyed by the cows, so erecting one at their watering hole (and hoping the cows have been locked out) looks like the only answer. I'm looking forward to the cooler days now. I will be able to sit in a hide for more than an hour in the morning, and not come out looking like I have been in a sauna. By rights I should be about 8 stone. 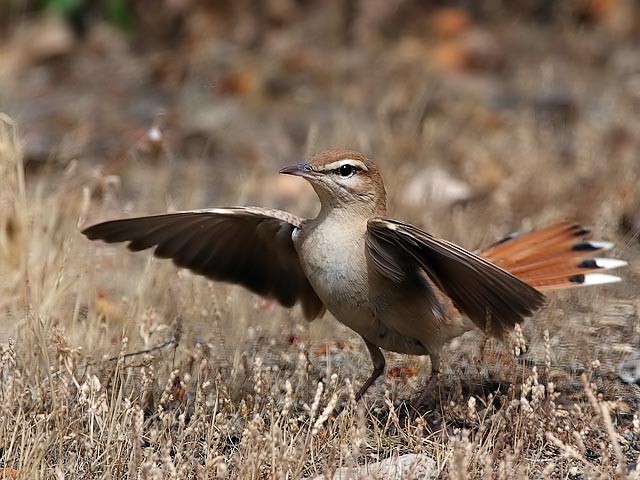 There have been reports this year of good numbers of Rufous Bush Robins nesting on the south-facing slopes of the Gredos. I haven't found any on the slopes of the Sierra de Montanchez where I live yet, although the habitat looks ideal. Locating them is going to be a major project for next spring.

I was coming back from a little jaunt the other day when I spotted a man washing his horse in the automatic car wash. I laughed out loud and pointed it out to the Spanish guy I was with. He looked at me quizzically so I said, "Look, a horse in a car wash!" He just shrugged and said, "What is the problem? It is very normal here, everyone does it." He wondered why I thought it was strange, then muttered "el loco ingles!" at the same time as I muttered "crazy Spanish!".