An encounter with either of Britain's two Accipiter hawk species is always an exciting moment. However, although Eurasian Sparrowhawk and Northern Goshawk are often straightforward to identify on a good view, a brief or distant sighting can be deceptive, particularly for those unfamiliar with the larger species. As a result, Eurasian Sparrowhawk is frequently misidentified as Northern Goshawk in Britain. 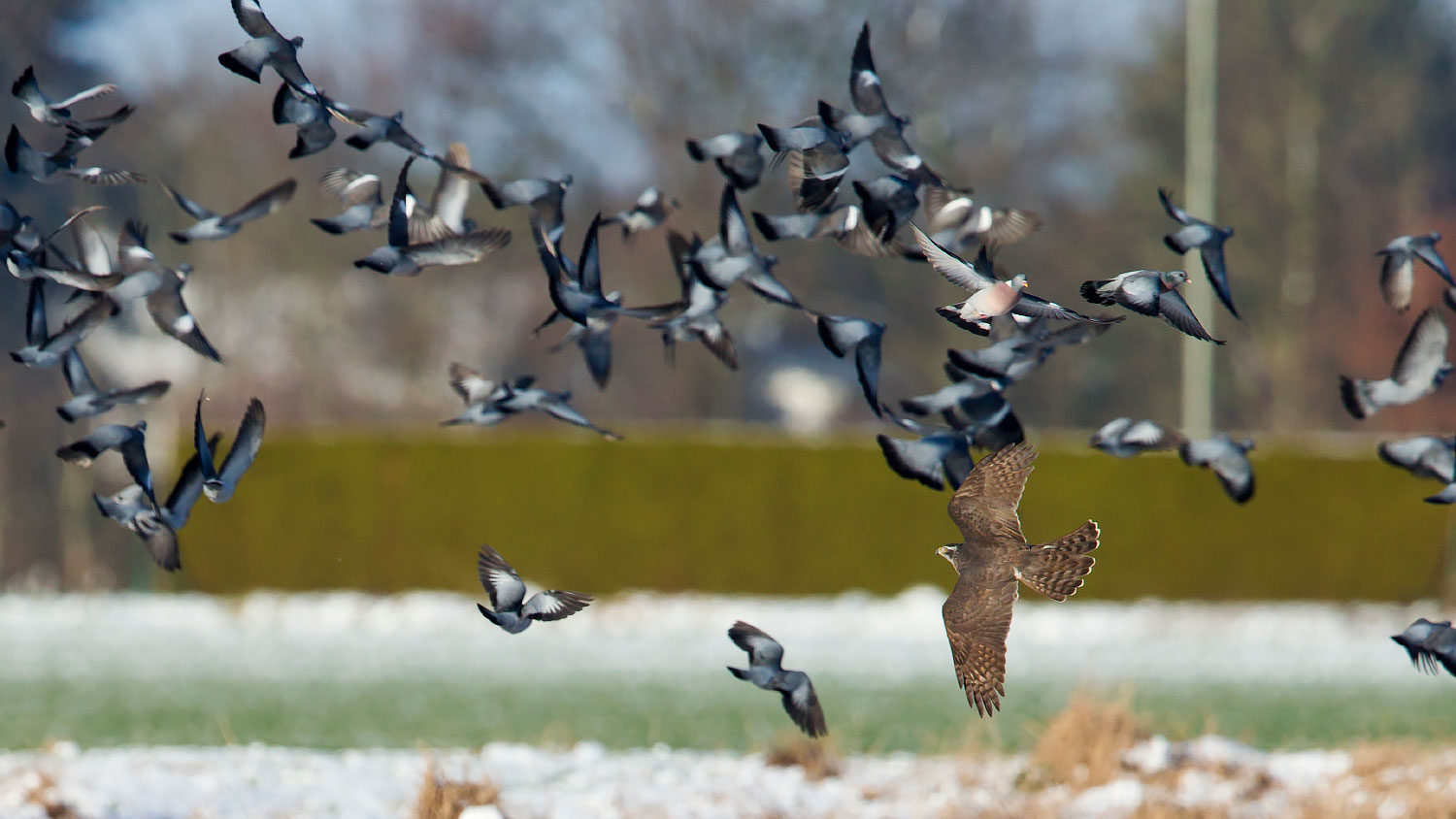 Northern Goshawk (The Netherlands, 28 December 2014). An encounter with an Accipiter is always exciting. This hunting Northern Goshawk is causing a typical panic, scattering Woodpigeons and Stock Doves in all directions (Ran Schols / www.agami.nl).

This feisty small Accipiter is widespread in the Palearctic, its range stretching from the Canary Islands and Madeira in the west to Kamchatka in the Russian Far East. It occurs throughout Britain and is, along with Common Buzzard and Common Kestrel, one of our commonest raptors. It is largely resident, although there is some evidence of limited immigration from the continent.

Encounters are typically brief, most frequently seen hunting low and fast along woodland edges and roadside hedges but also in gardens. This is the ultimate ambush predator of small birds, relying on surprise and the speed of its pursuit. It will even chase small birds on foot. In early spring, however, Eurasian Sparrowhawks can be seen displaying high over their breeding woodlands, allowing a more extended view.

This is a small raptor, most similar in size to a kestrel, though – as in all birds of prey – the females are larger than the males. The Accipiter shape is very distinctive, with short and broad wings with a strongly rounded wing-tip – ideal for rapid manouevring in confined spaces. When not hunting, the flight lacks the aerial mastery of the falcons and appears a little weak – a very characteristic ‘flap, flap, glide'.

Apart from the wing shape, typical components of Eurasian Sparrowhawk's silhouette are a small head, long tail (longer than the breadth of the wings) which is rather narrow at the base and has quite 'square' corners. The main confusion risk lies with the larger female. Although not truly of Northern Goshawk size, they can sometimes appear strangely large, particularly when displaying. At such times, the slow, ponderous wing beat and the expanded white undertail coverts can create the impression of a much larger bird.

A normal Eurasian Sparrowhawk view reveals little plumage detail but, if seen well, the adult males are beautifully blue-grey above and delicately barred rusty-orange below with orange on the cheeks also. Adult females are drabber, brown-grey above and barred brown below. Juveniles are brown above with subtle dark bands across the upperwings in flight, and are marked with coarse brown transverse barring on the underparts.

This species has an even larger range than Eurasian Sparrowhawk, occurring throughout the Holarctic. This is, however, a much rarer bird in Britain, with a population of just a few hundred pairs. It is unfortunately a heavily persecuted raptor and would otherwise certainly be more widespread.

This is a forest-dweller rather than a bird of open country, so casual encounters with hunting Northern Goshawks are infrequent. This is a species best sought on sunny, breezy days in late winter and early spring when birds display over breeding territories. Once the display period is over, they seem to melt away once more, remaining for much of their time beneath the woodland canopy. The species is resident here and is rarely sighted away from its breeding areas. Records of the species elsewhere, therefore, demand particular scrutiny.

This is a much larger species than Eurasian Sparrowhawk. The males having the sam size wingspan as a Carrion Crow, while that of the females is similar to that of Common Buzzard. Judging size on a lone bird in the sky is difficult, however, and, as noted above, female Eurasian Sparrowhawks can appear disconcertingly large.

Northern Goshawks are best identified on structure. Compared with Eurasian Sparrowhawk, they are larger headed, longer necked and heavier bodied, while the wing structure differs too, being longer, with a longer 'arm', a more pointed 'hand' and bulging secondaries forming a slight 'S' curve in the rear edge of the wing. There are differences in the tail, too, which appears slightly shorter (comparable to the wing breadth), broader based and has rather rounded corners. On a rare perched view, the tarsi are thick and powerful in contrast to the rather spindly legs of a Eurasian Sparrowhawk – a clear indication that goshawks take much larger and more powerful prey such as pigeons, corvids and squirrels, rather than small passerines.

This combination of larger size and heavier structure gives Northern Goshawk a stronger, steadier flight and a more powerful wing action than Eurasian Sparrowhawk. The species has an impressive presence in the air, causing mass flushes of Wood Pigeons and Rooks. The display flight is particularly heavy and ponderous, with the heavy-bodied structure accentuated by strongly expanded white undertail coverts. While confusion with Eurasian Sparrowhawk is an ever-present risk, another potential confusion species is Hen Harrier and, elsewhere in northernmost Europe, Gyr Falcon.

Both adult male and female Northern Goshawks are a cold steely grey above with grey barring below and a much stronger face pattern than Eurasian Sparrowhawk comprising solidly dark crown and ear coverts and a prominent white supercilium. Juveniles are a rich warm brown above with slightly stronger dark bands across the upperwings in flight. The most striking feature, however, is the underparts pattern which comprises large vertically aligned drop-shaped streaks, very different indeed from the barred underparts of juvenile Eurasian Sparrowhawks. 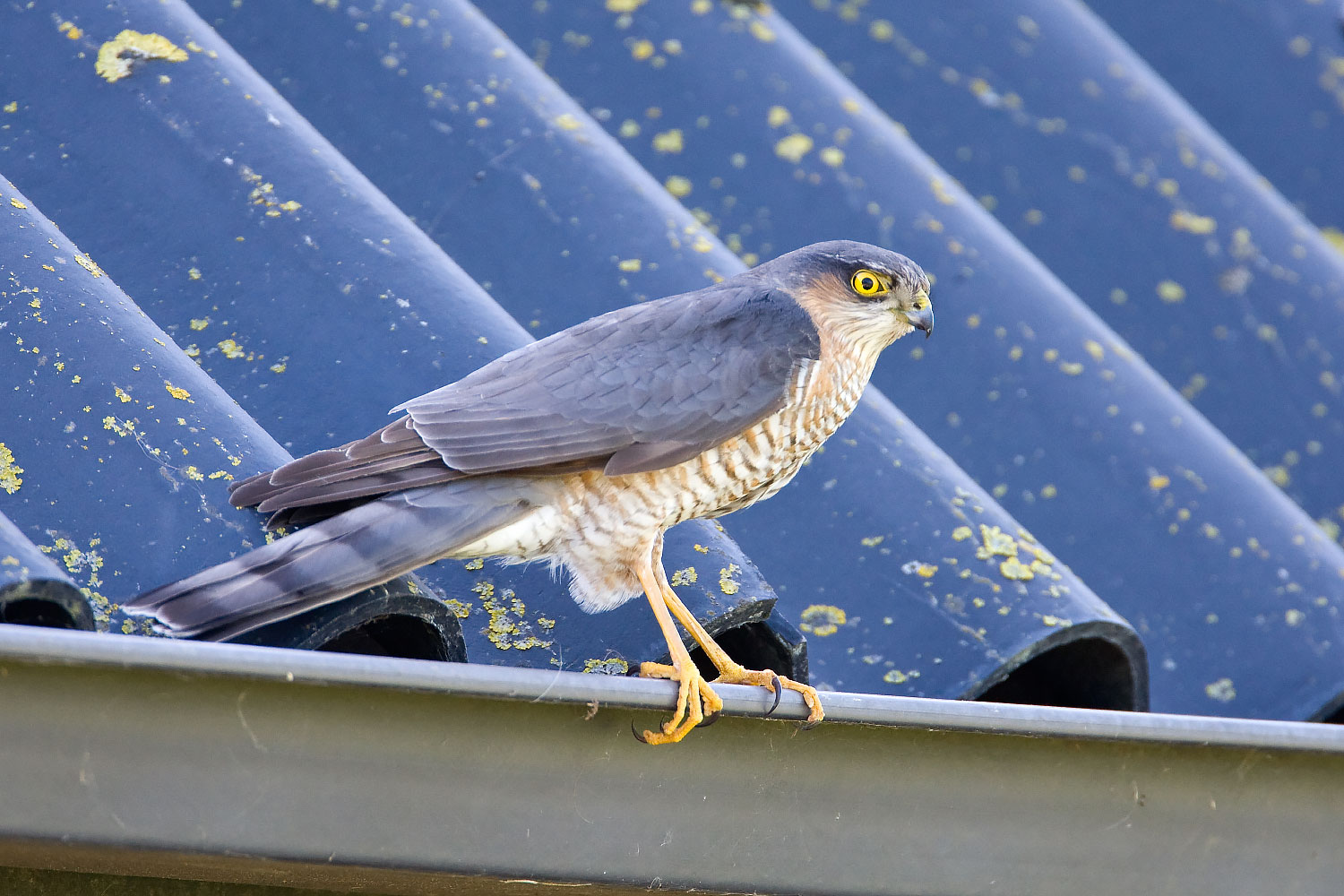 Eurasian Sparrowhawk (The Netherlands, 10 May 2008). Adult male Eurasian Sparrowhawks are creatures of real beauty: small and fragile looking, slim bodied with long, slender tarsi and toes and a bright fiery eye set in a rather bland, 'open' face. When seen well, as here, they are splendidly colourful too, washed powder blue-grey above and finely barred deep orange below (Marc Guyt / www.agami.nl). 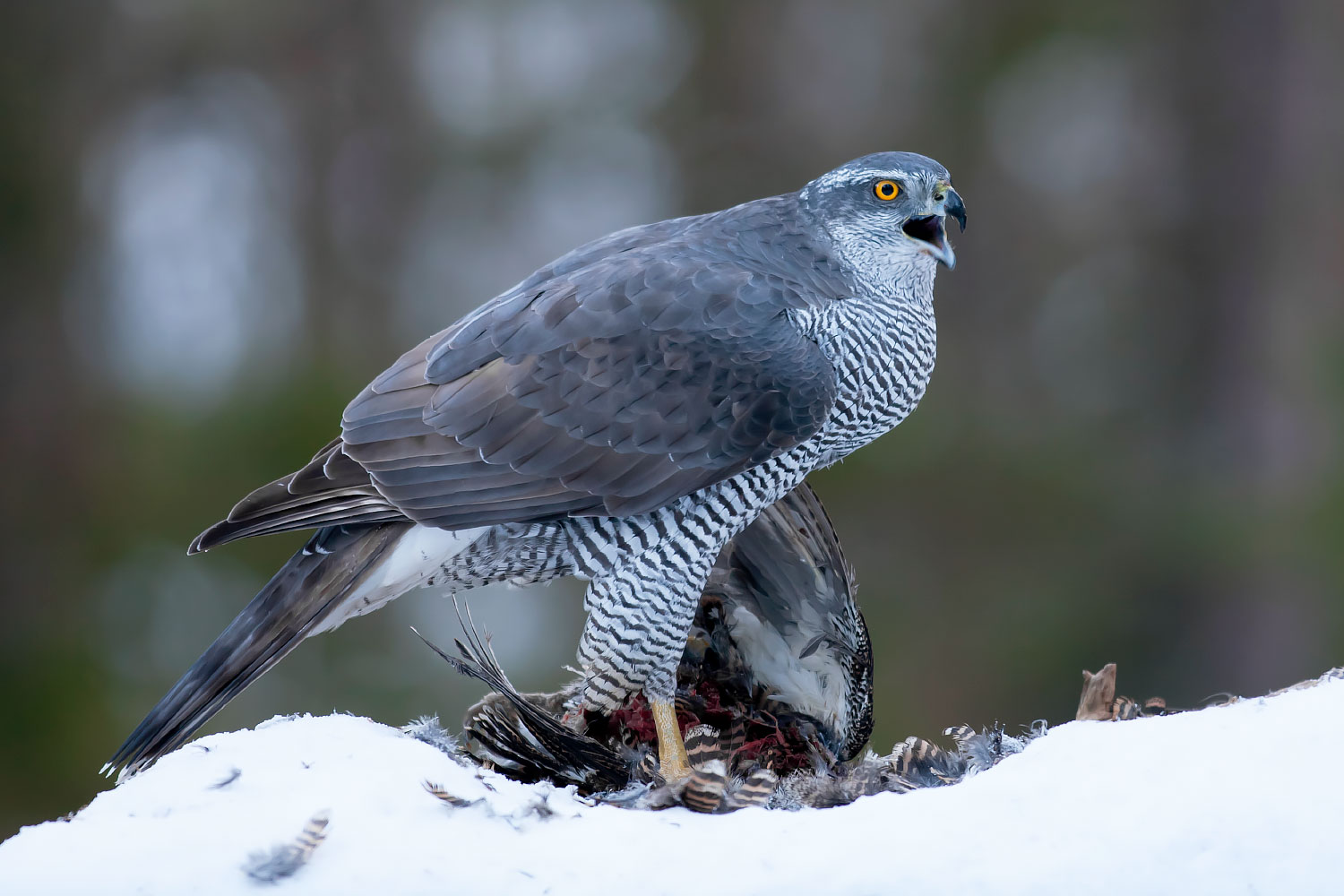 Northern Goshawk (Nord-Trøndelag, Norway, 2 March 2010). Adult Northern Goshawks look much less fragile than their smaller relatives. Note here the substantial size of the body (making the head look rather small), the 'full' chest and vent and the very thick, powerful tarsi. In both sexes, the colours are much more subdued than those of Sparrowhawk – cold grey above and very finely barred grey below – with a bolder face pattern comprising dark ear coverts and crown and a narrow white supercilium (Steve Knell). 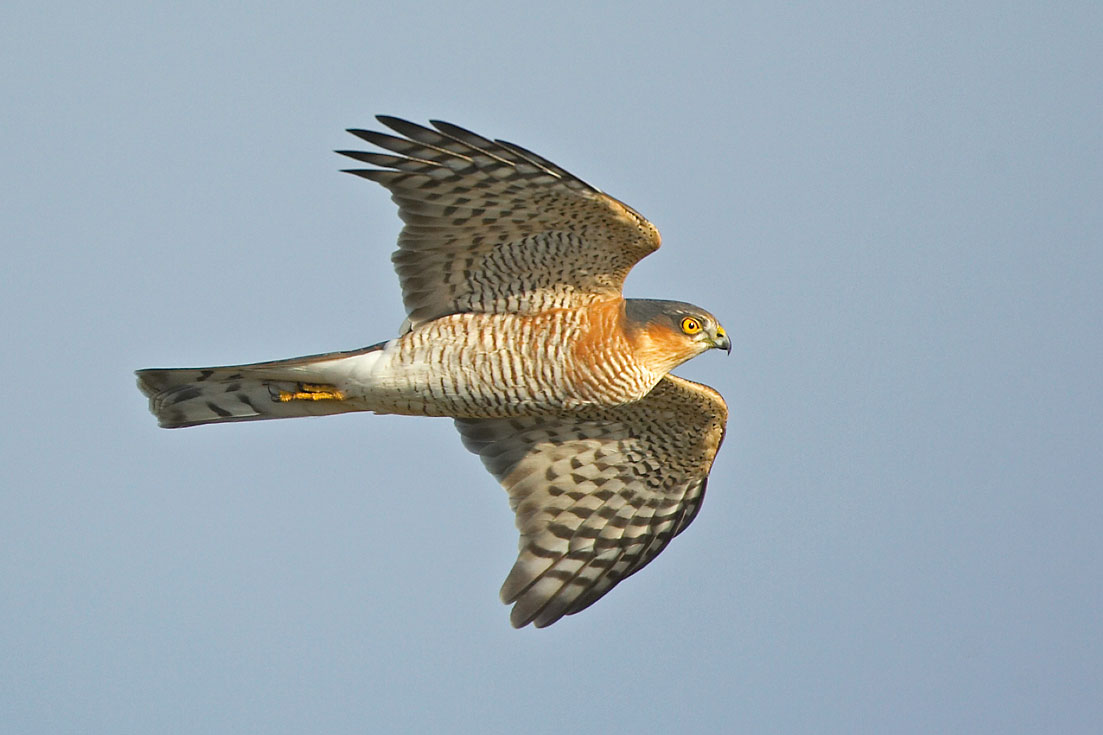 Eurasian Sparrowhawk (Hanko, Finland, 12 October 2005). The male's bright eye and blue-and-orange plumage hues are evident here also, but note too the typical proportions: a deep chest but slim body, short, rounded wings and a long tail with a narrow base and rather square corners (Markus Varesvuo / www.birdphoto.fi). 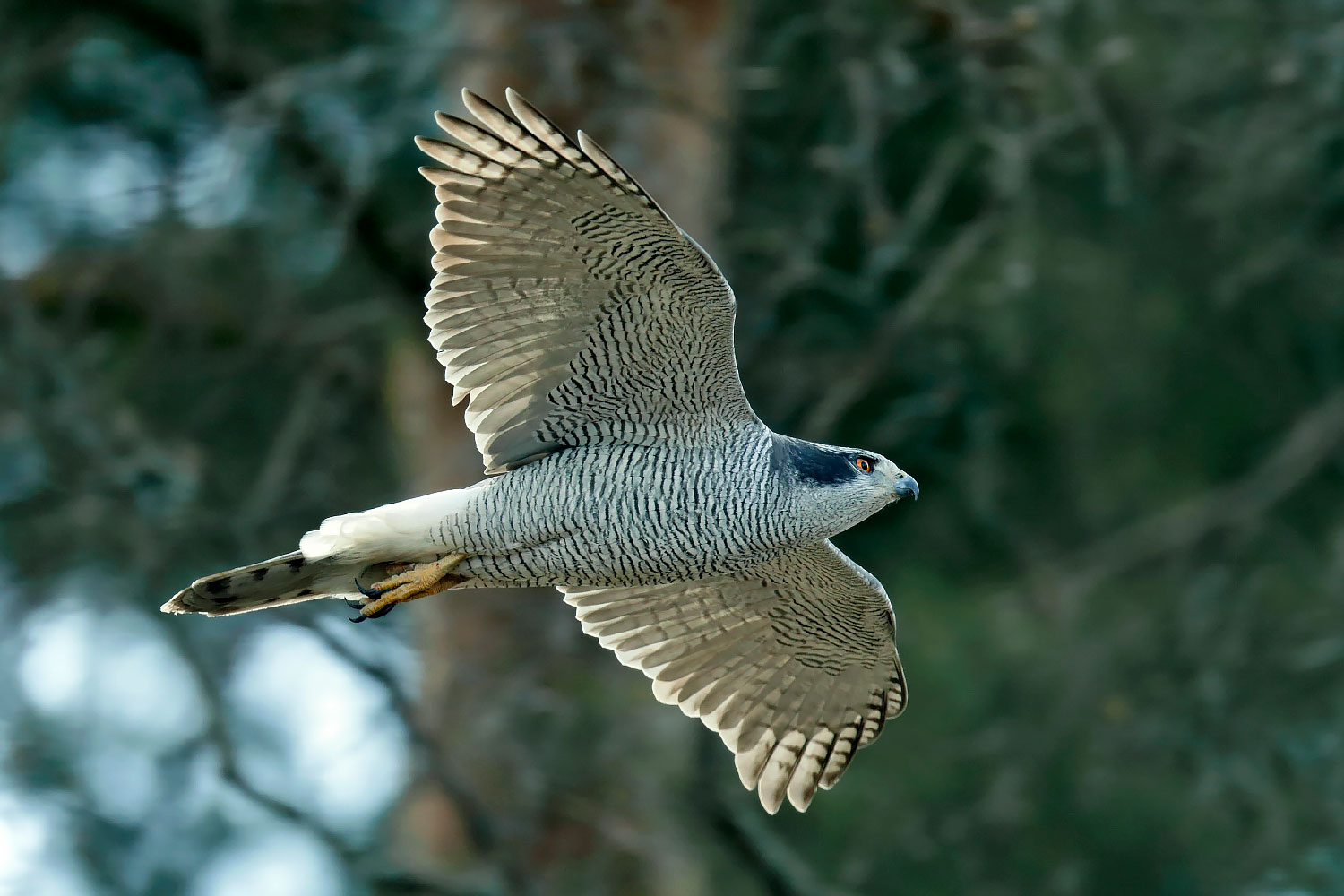 Northern Goshawk (Helsinki, Finland, 29 March 2017). Flying Northern Goshawks are impressive. Note that the body is deep and broad throughout its length, the head is quite prominent, the wing has a long, rather pointed 'hand' and the tail is broad with a rounded tip. The face pattern is particularly striking on this bird, indicating a male. Note also the very fine barring on the underparts and the very pale underwing. The billowing white undertail coverts are typical of adult Northern Goshawk, but they may also be shown by Eurasian Sparrowhawk (Dick Forsman / www.agami.nl). 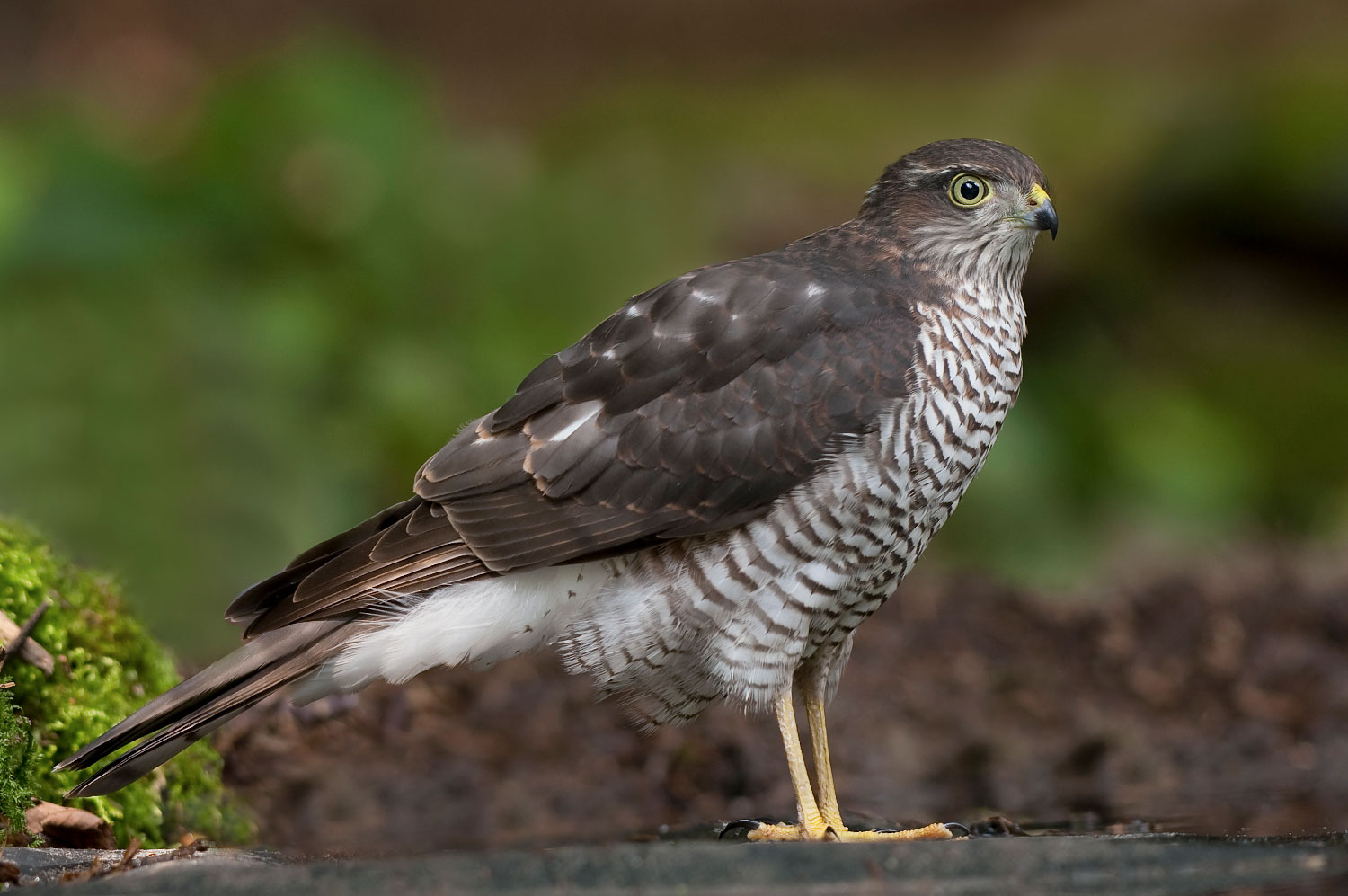 Eurasian Sparrowhawk (Goor, The Netherlands, 18 July 2009). The subdued colours of this perched Accipiter resemble those of Northern Goshawk, but note the rather lighter build and more slender proportions, notably the long, thin tarsi, and the rather plain and bland face pattern with only a faint supercilium. All these features are typical of Eurasian Sparrowhawk. The pale lemon-yellow eye, variegated upperparts with rusty-brown feather tips, irregular dark rufous-brown barring on the upper breast and contrasting paler primaries all indicate that this is a young bird (Han Bouwmeester / www.agami.nl). 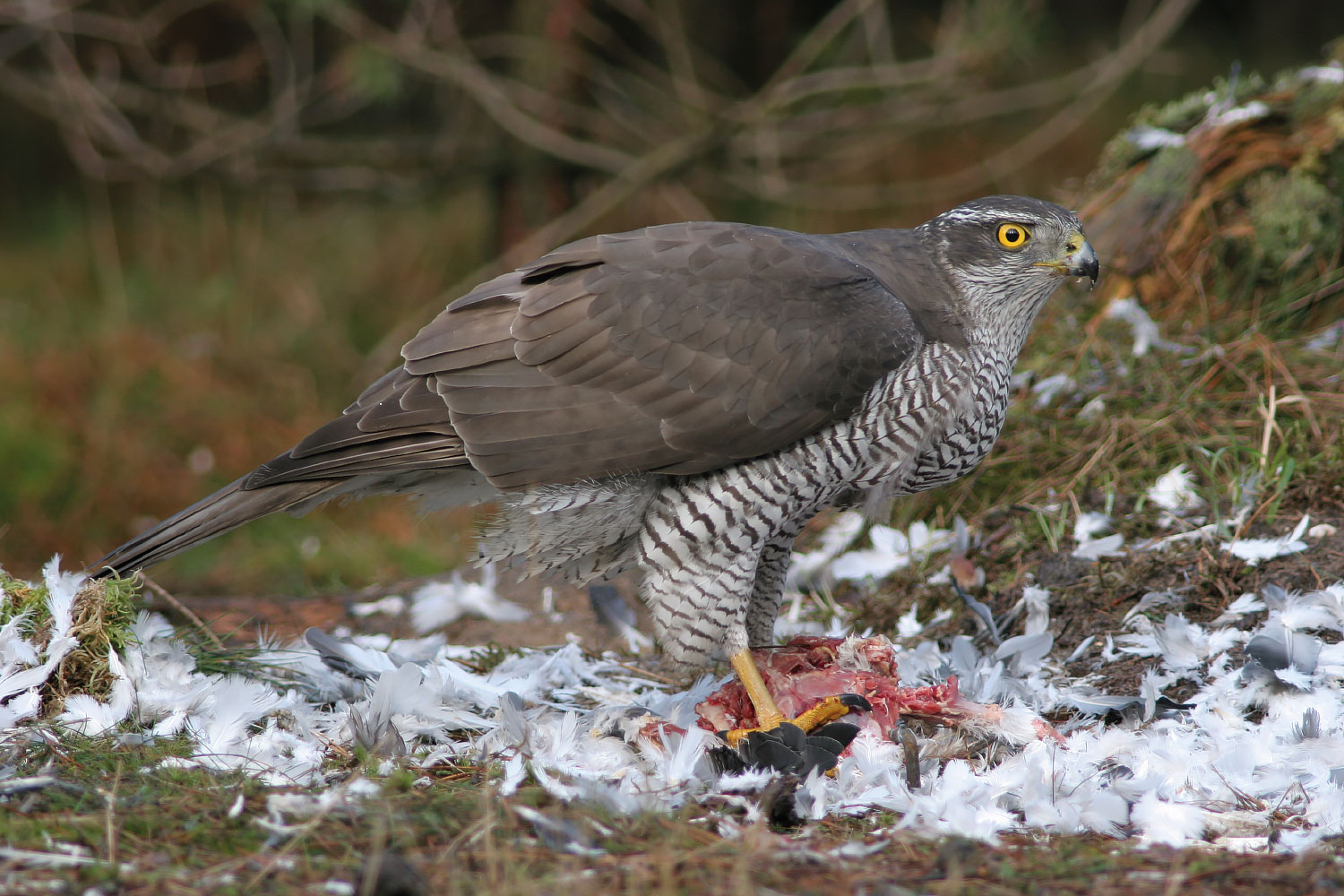 Northern Goshawk (The Netherlands, 25 January 2005). The very heavy-looking body of this bird suggests at once that it is a Northern Goshawk, a diagnosis readily confirmed by its small-looking head, thick, powerful tarsi, solidly dark ear coverts and prominent white supercilium (Chris van Rijswijk / www.agami.nl). 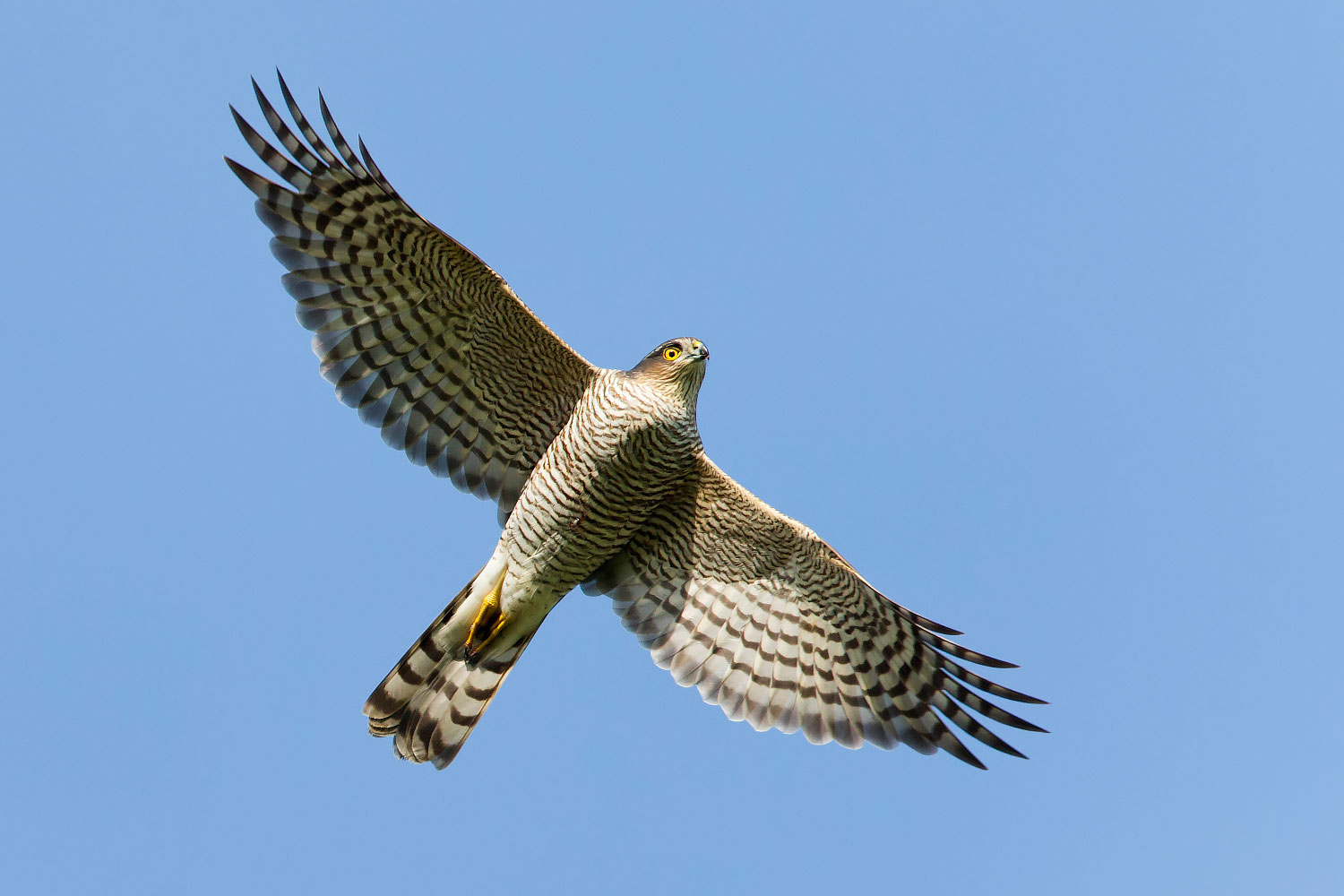 Eurasian Sparrowhawk (Limburg, The Netherlands, 28 October 2014). Though significantly larger than the male, female Eurasian Sparrowhawk has a similar structure in flight: a rather slender body, noticeably short, very rounded wings and a long tail with a narrow base and square corners. The rather bland face pattern can also be seen here. Ageing flying birds can be difficult, but the fine barring in the underwing coverts and regular upper breast barring suggest that this is an adult (Ran Schols / www.agami.nl). 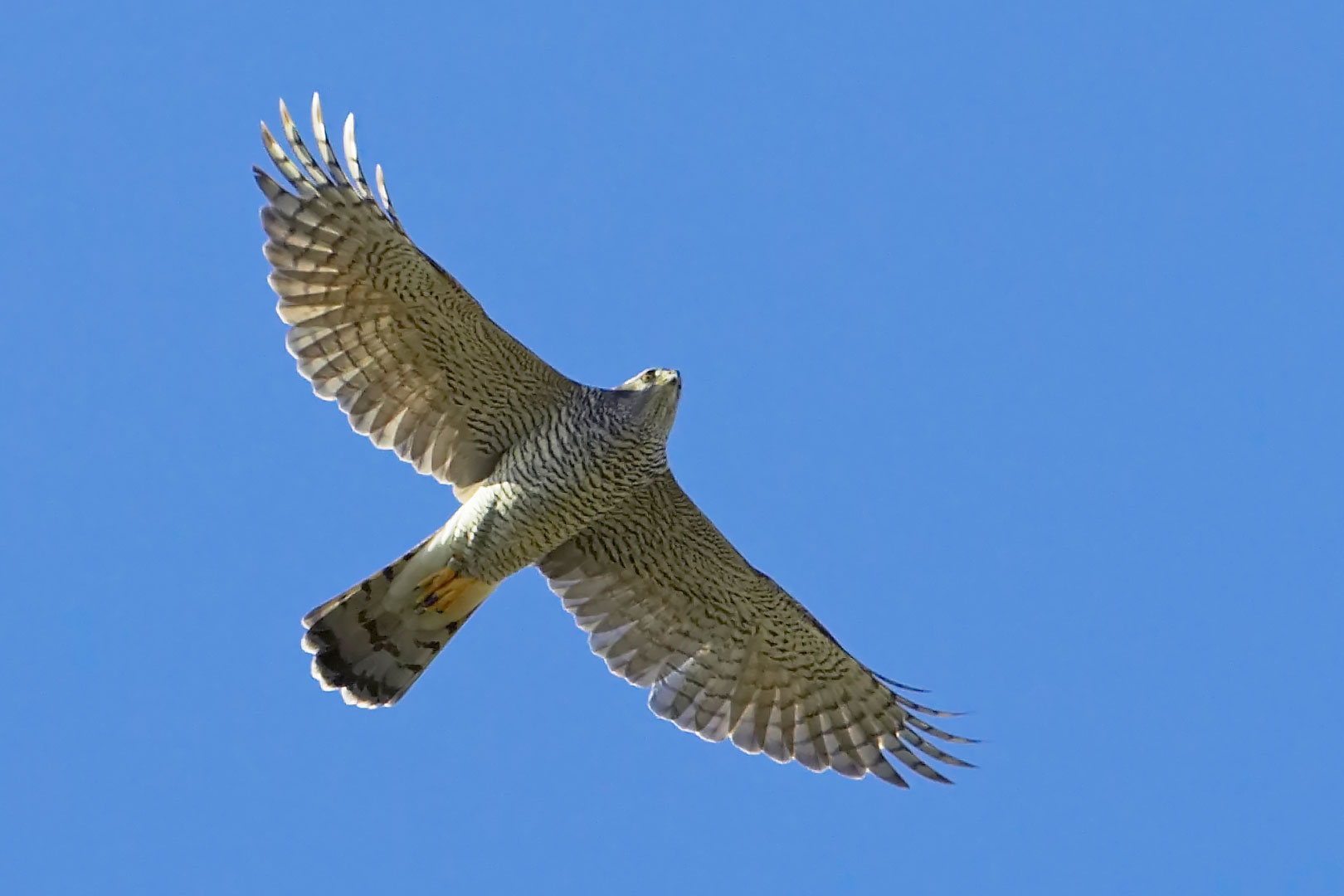 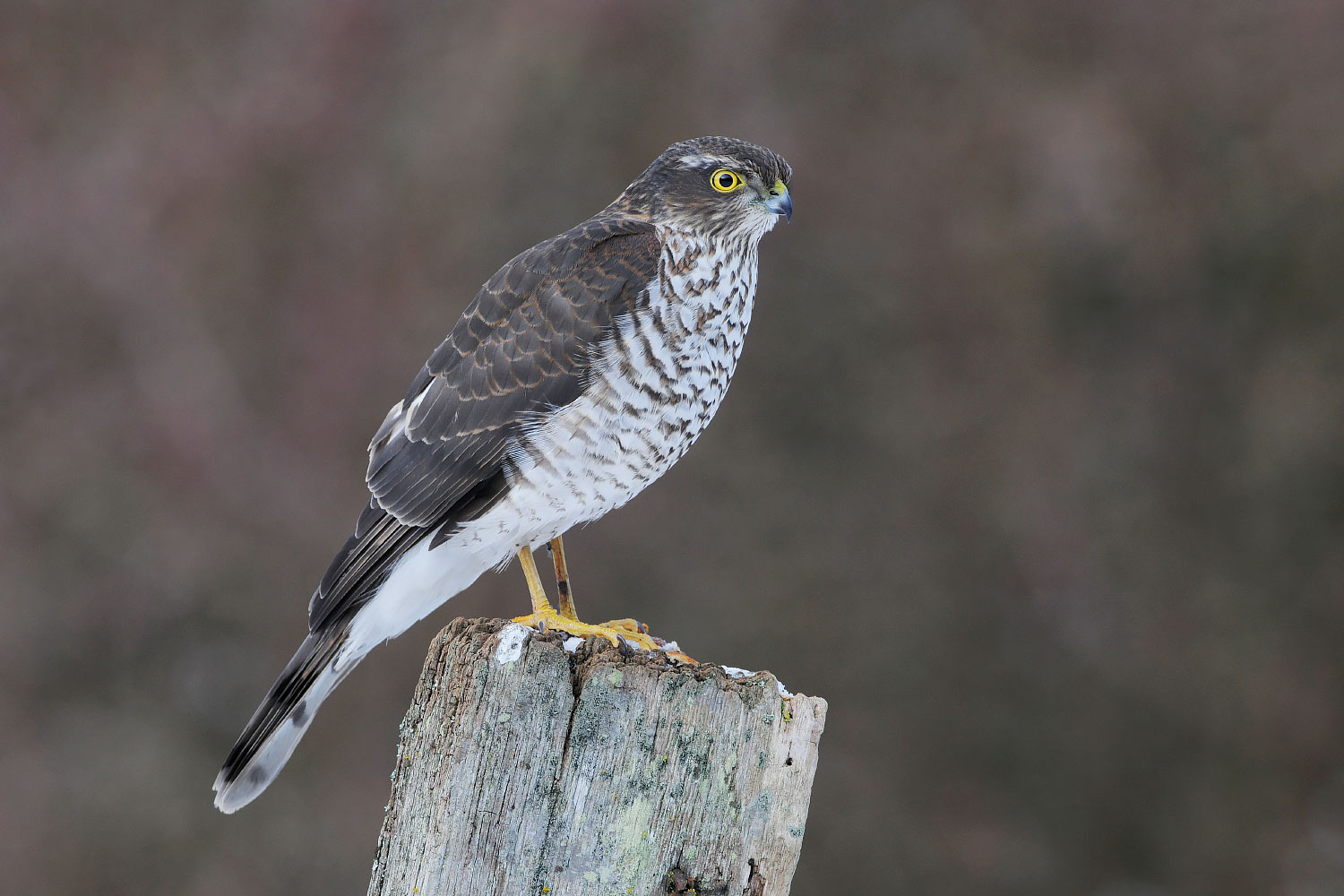 Eurasian Sparrowhawk (Croxton, Norfolk, 9 January 2010). This young Eurasian Sparrowhawk (note the variegated upperparts with rusty-brown feather tips and rather irregular barring on the upper breast) shows the typical structure of the species: a slender body and long, thin tarsi and toes. The petite proportions indicate that this is a juvenile male (Richard Brooks). 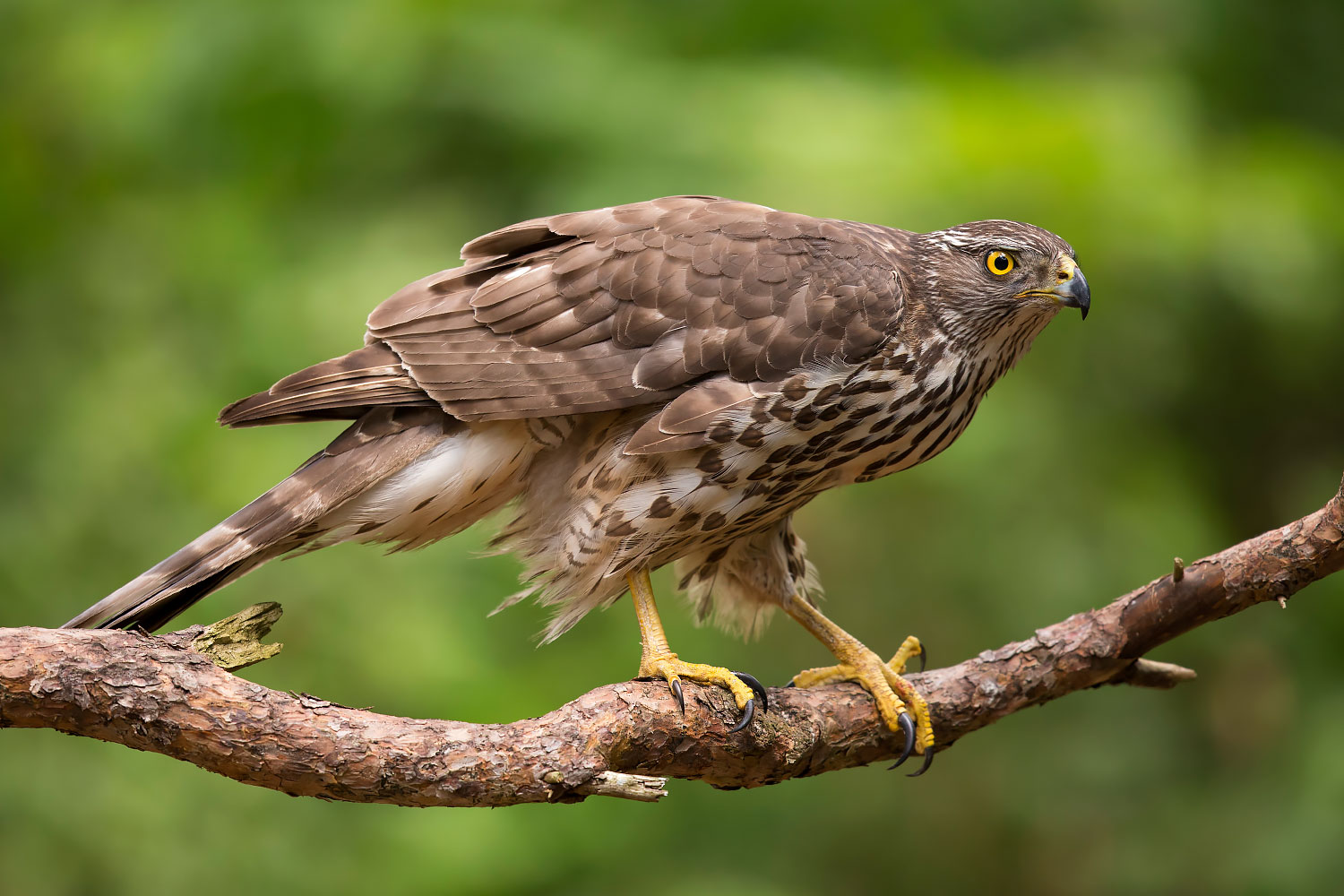 Northern Goshawk (Utrecht, The Netherlands, 27 February 2015). Juvenile Northern Goshawks, unlike their smaller cousins, show distinct longitudinal drop-shaped marks on the underparts. The face pattern is more subdued than that of adults, but the heavy structure is the same. Note the typical large body, small-looking head and thick tarsi and toes (Walter Soestbergen / www.agami.nl). 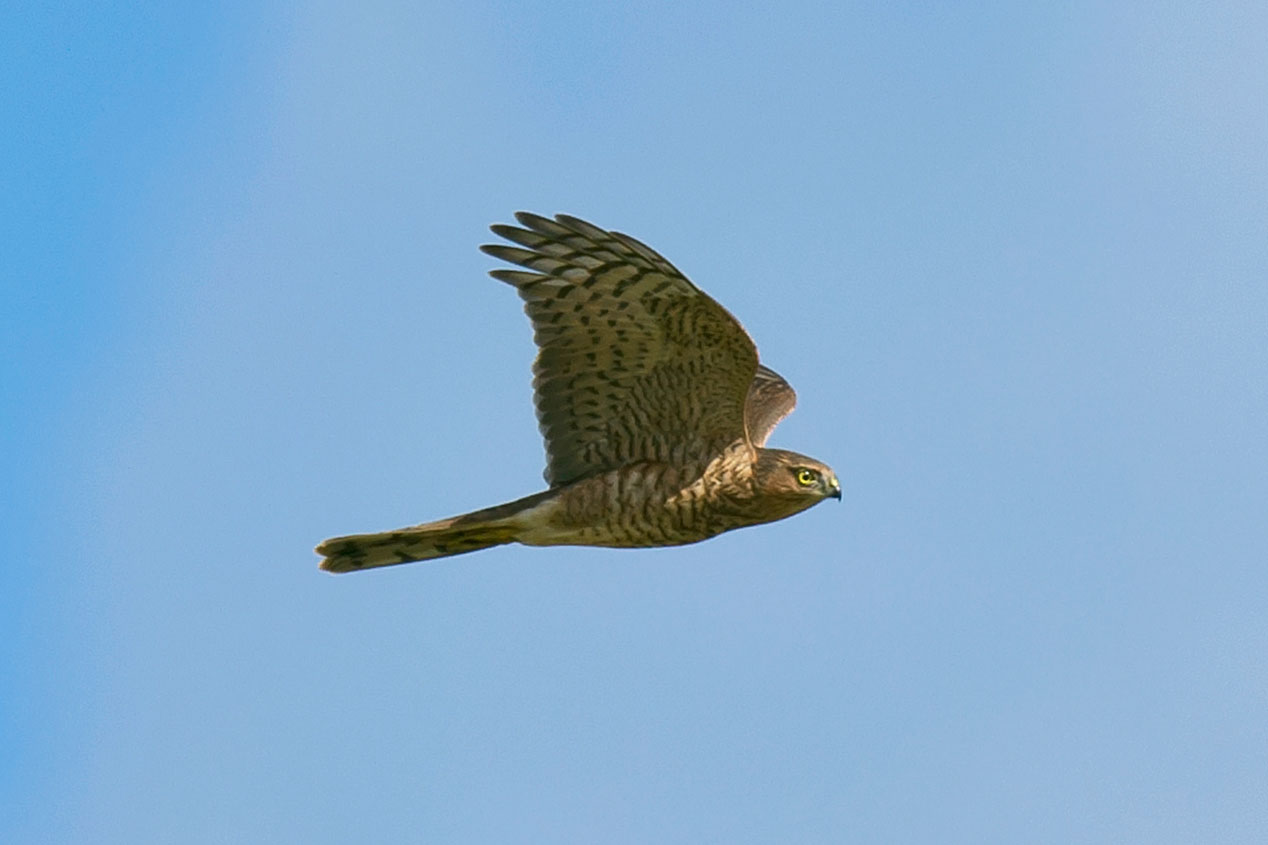 Eurasian Sparrowhawk (Seaforth, Lancashire, 25 August 2011). Typical Eurasian Sparrowhawk structure is evident here – short, broad wings with a blunt, rounded 'hand', a slim body, particularly at the rear, and a rather narrow-based, square-cornered tail. The plain-looking face is also usual of this species. Ageing flying birds is tricky, but the irregular dark brown markings on the upper breast indicate this is a juvenile (Steve Young / www.birdsonfilm.com). 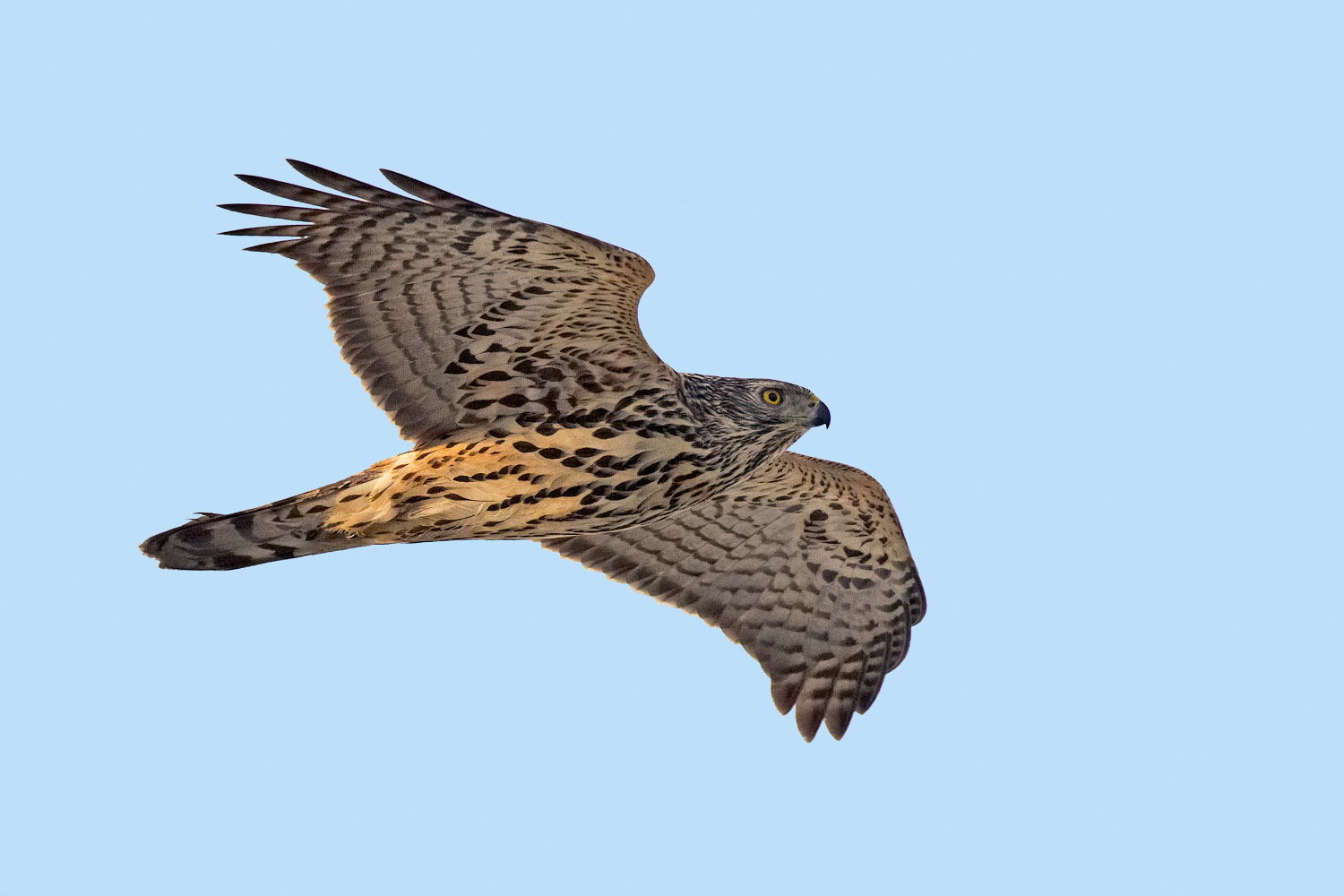