The British Trust for Ornithology (BTO) have fitted state-of-the-art satellite tags to eight more Common Cuckoos over the last few weeks as part of their ongoing study to help understand why this iconic bird is disappearing from large parts of the UK.

During the last four years scientists at the BTO have been following Cuckoos as they make their way to and from Africa. This has identified two distinct southerly migration routes: one through the western Mediterranean, taking in Spain, Morocco and West Africa, and the other crossing the central Mediterranean, through Italy and the central Sahara.

Cuckoo has shown alarming declines during the last 25 years, with the most shocking losses being found in England; almost three-quarters of English-breeding Cuckoos have disappeared. In Scotland they are doing much better, increasing by 3 per cent in just over a decade. 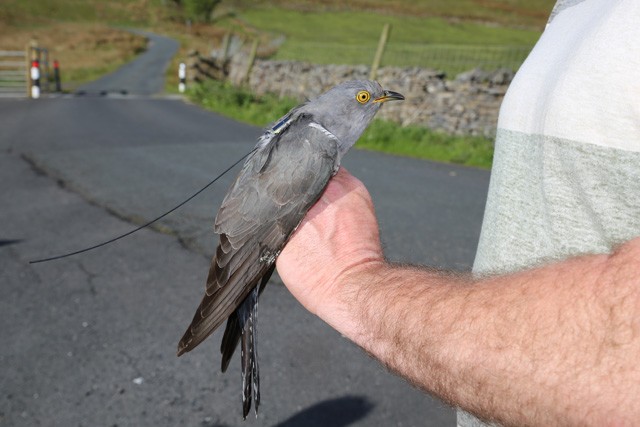 So far, all of the tagged Scottish and Welsh Cuckoos have taken the central route, while only Cuckoos from England have taken the western route and BTO scientists want to know if this is contributing to their different fortunes in the UK. Now they need to know which route birds from northern England take and whether this differs east and west of the Pennines.

To find this out, Cuckoos have been tagged from either side of the Pennines; three in North Yorkshire, two in Lancashire and one in West Yorkshire, as well as one in Wales and one further south in Sherwood Forest.

The latter bird has already begun his long journey to the Congo rainforest and is currently in France, north of Vichy; the other seven may not be too long in following him.

Dr Chris Hewson, lead BTO scientist on the project, said: "The Cuckoo project has entered a very exciting phase. We now know more about the general routes that our birds take to get to central Africa, and how they use different sites as staging posts. But we are now completing our knowledge of what Cuckoos from different parts of the UK do and how this might be affecting populations in different areas. None of this would be possible without the generosity of our supporters, members and Cuckoo sponsors."

Six of the birds are to be named by schools that have been entered into a naming competition, as part of a partnership working with EDF Energy and their award-winning education programme, the Pod. The names of all six birds will be revealed by the end of the month. One of the three birds tagged at RAF Fylingdales in North Yorkshire, who monitor the satellites that will be tracking the Cuckoos' journeys, has been named by staff as Vigilamus. This is quite apt as it is the station motto meaning 'We are watching'. All of the new birds can be followed as they make their way south on the BTO website, revealing their choice of route for the first time. You can follow your favourite and sponsor them at www.bto.org/cuckoos.