An early morning visit to the Observatory on 16 June proved productive when, after a trap round that had produced a few juvenile Common Starlings but no migrants, I arrived at the Observatory plantation with the intention of opening the nets for a while. A movement in the nearest rose bushes caught my attention and, on raising my bins, I was met with an eyeful of buffy undertail coverts with conspicuous pale tips. River Warbler!

A quick check of the rest of the bird confirmed it was indeed a large, plain Locustella warbler, but then it dropped into the roses. I texted the team and opened the nets (flushing a Common Quail from a net ride in the process), but there was no further sign of the bird. For those of you who know the Observatory garden, it's not a huge area, but it is pretty dense in there and despite the entire wardening team crawling through the vegetation (looking like a cross between Last of the Summer Wine and a David Attenborough special on gorillas), nothing emerged.

After an hour or so, we had to head out for seabird monitoring, with rain then setting in until early afternoon. As the sun came out, we headed back to the 'Obs' to try again for the River Warbler. Instead, the first bird I saw was a greyish-brown Hippolais-type warbler that was pumping its tail. It showed fairly well but briefly and was surely an Eastern Olivaceous, but I was slightly worried that the pumping wasn't as obvious as on the bird I'd found in September 2011. It wasn't fanning or waving its tail sideways, but I was aware that the Iduna and Hippolais group are not always straightforward and tail movements can be more variable than the literature suggests. 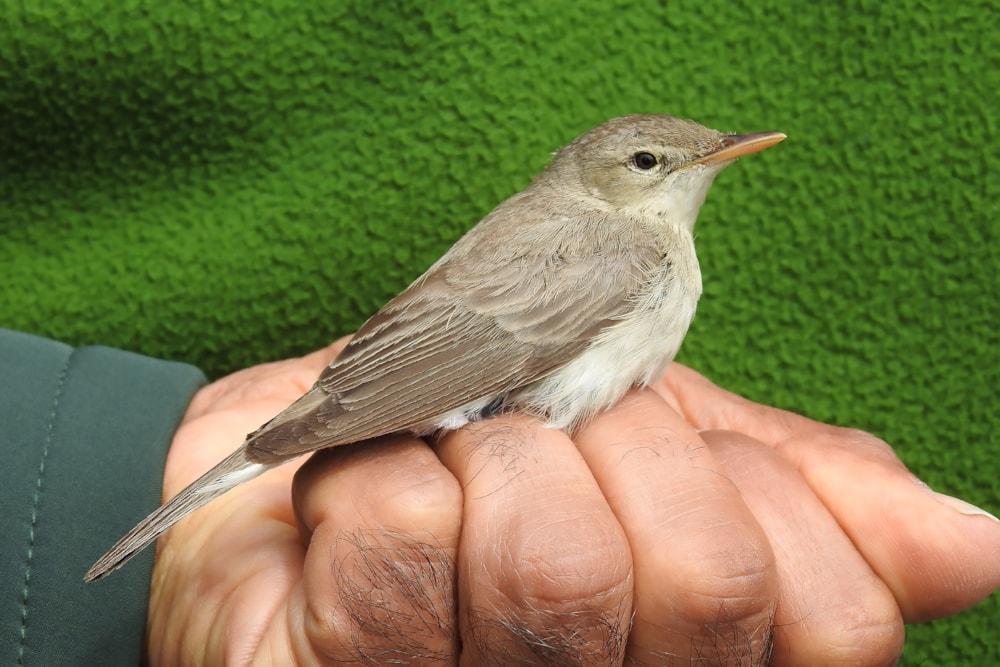 The nets were opened and, although it was showing occasionally, there was a sense of relief when it made its way into a mist-net, so the identification could hopefully be confirmed. A reasonable crowd had gathered as we processed the bird on the picnic table that had survived the recent Observatory fire with just a few scorch marks. Wing length (70 mm) ruled out Upcher's and Olive-tree Warblers; obvious emarginations on the third and fourth primaries, with a fainter one on P5, were also important in pointing towards Eastern Olivaceous Warbler ('EOW' hereafter), while the length of P2 (between the sixth and seventh primary, although closer to the former), the first primary (which protruded 4 mm beyond the primary coverts) and the wing point comprising the third and fourth primaries also suited this species. The relatively long primary projection ruled out Sykes's Warbler (although it never really felt like that species anyway), and was probably at the top end of the range for EOW. A couple of features were not as convincing for EOW, and resulted in a long evening session checking the limited literature we had, referencing the internet and going back over the photos and measurements to check the identification (more on that later).

In the meantime, while we finished processing and documenting the bird, Max and Richard went to check the nets again and returned with a juvenile Common Starling and  ... the River Warbler! As ringing demonstrations go, it was a pretty impressive mix of species – although two visitors from the US assumed it was normal as their last visit to Fair Isle seven years ago coincided with a River Warbler being trapped at the Obs. Identification of the River Warbler was much more straightforward and it was quickly processed, photographed and released. The previously described undertail coverts, along with some smudgy streaking on the breast and a rich, reddish-brown upperpart coloration were all distinctive on this large Locustella. 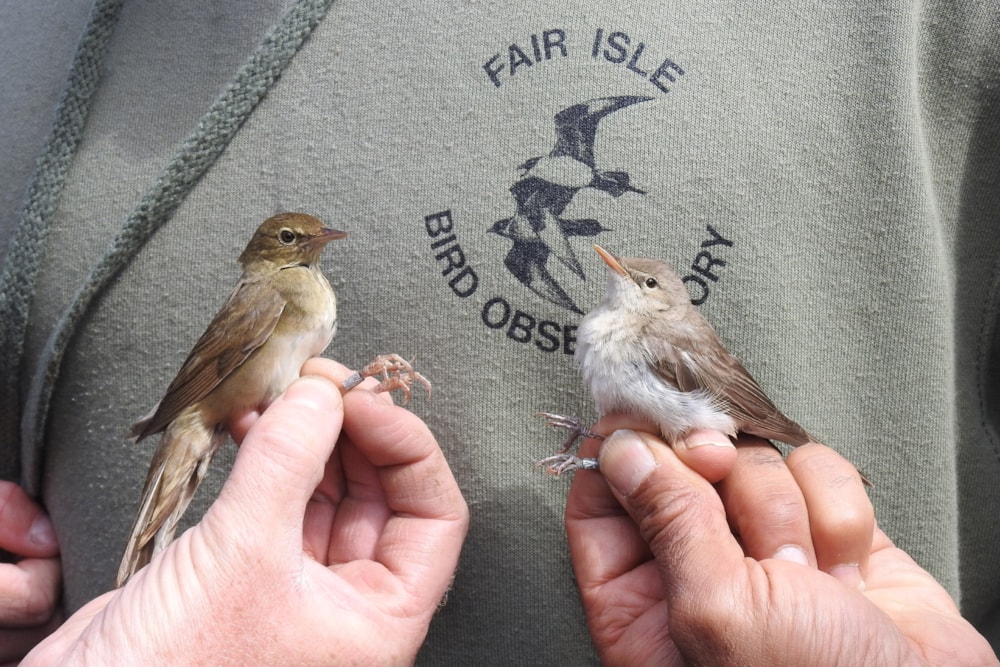 The EOW was seen occasionally in the Obs garden until mid-afternoon, when it headed towards the Haven and wasn't relocated, although it then reappeared down the island briefly the following day, and again on 19-20th, although it was only seen for a few minutes at most each day. The River Warbler wasn't seen again all day, but reappeared two days later in the Gully before vanishing again. 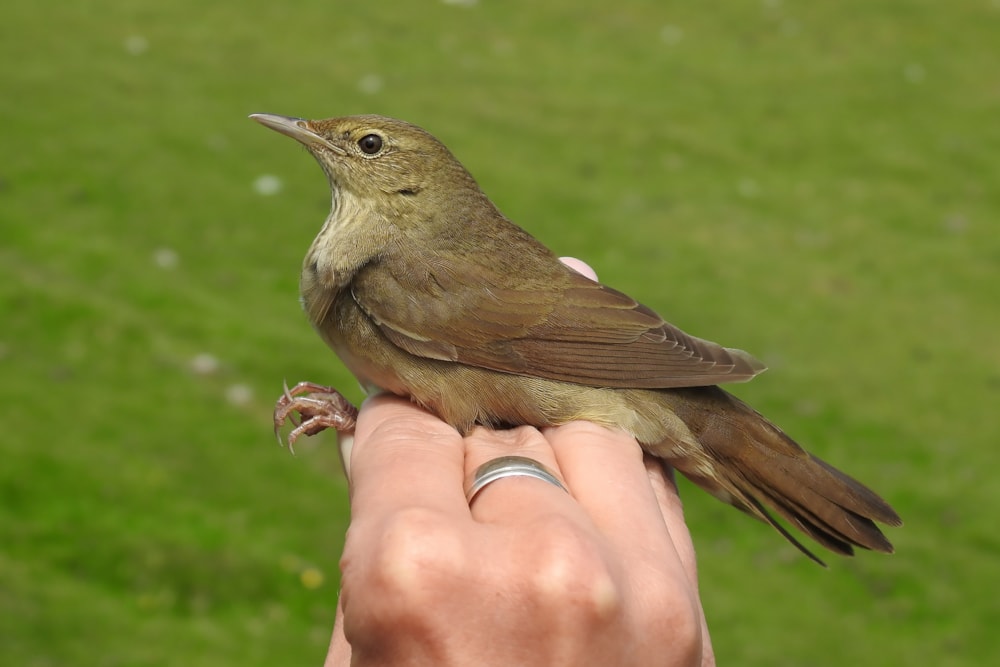 The Fair Isle River Warbler in the hand – it represented the 18th of its species to be recorded on the island (Max Hellicar).

The Iduna complex is a really interesting one, and there is clearly plenty of overlap in the group, so the fact that one or two features weren't perfect for EOW meant that we wanted to dedicate more time to the identification and so an enjoyable evening was spent going over all the features. This isn't an attempt to reproduce the full description taken of the bird, but just to highlight a few specific concerns we felt needed addressing: 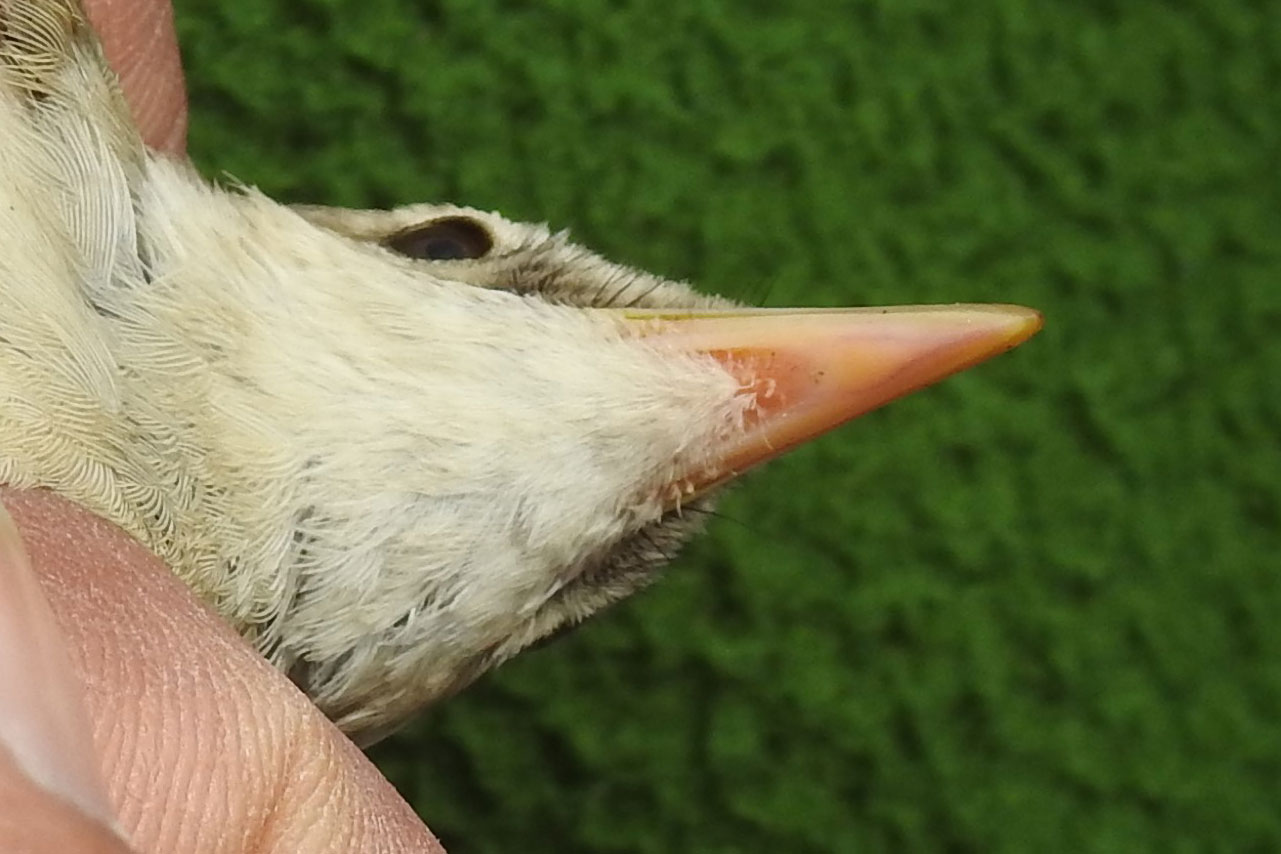 The bill base on the Fair Isle Eastern Olivaceous Warbler was broad – in fact 1 mm wider than the maximum given for the species by Svensson – nor did it show the concave appearance from below, which is widely associated with the species (Sarah Harris). 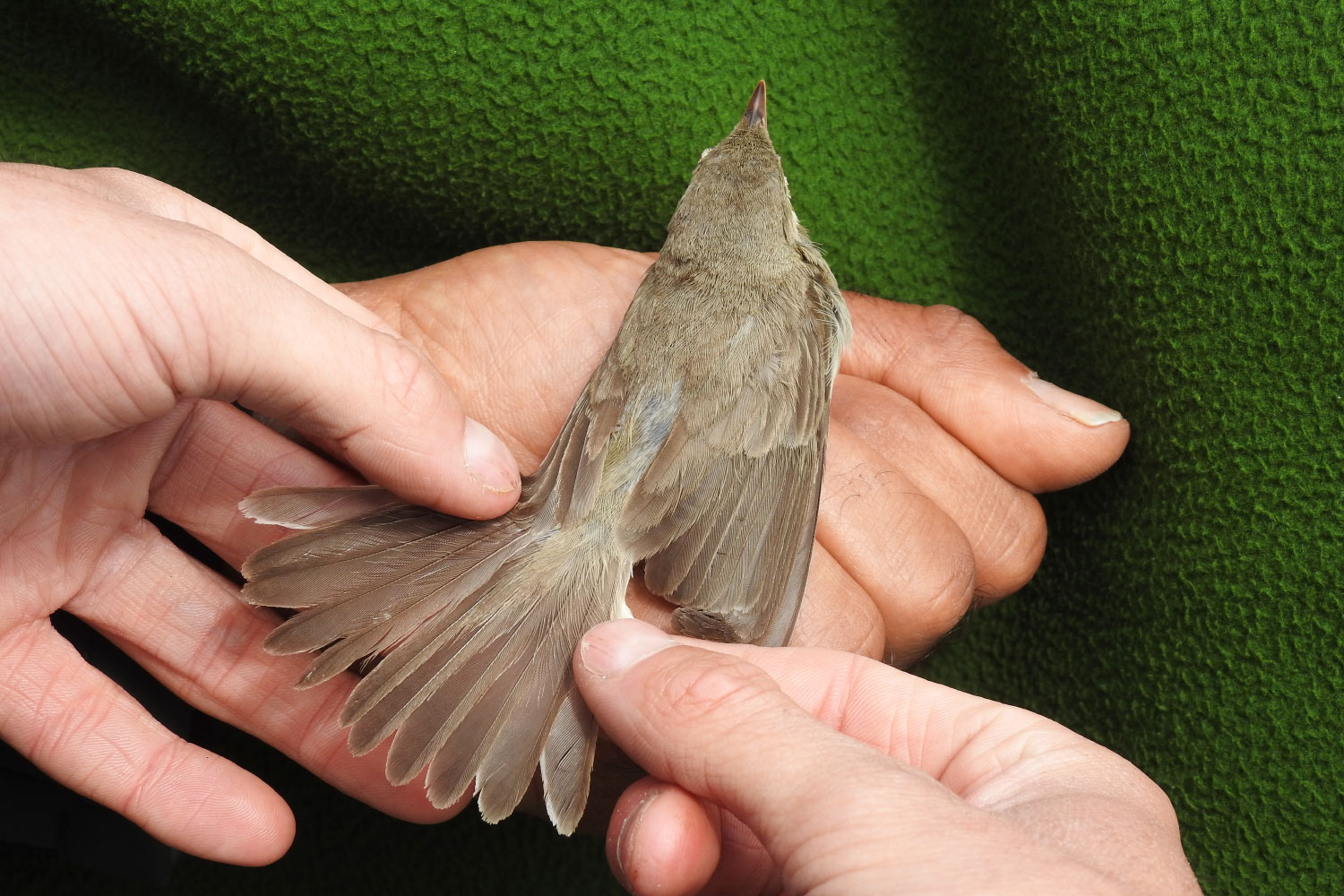 The bird showed a lack of white in the outer tail, although the tips of the outer two tail feathers and the inner web of the outer tail were a pale off-white. It was felt that the wear on the tail probably accounted for its absence (Sarah Harris).

The plumage was quite worn, although was overall a greyish (rather than the browner tones shown by Western Olivaceous), while the lores were perhaps a little pale for a typical EOW (a feature potentially favouring Western Olivaceous or Upcher's), although this appears variable and may also have been influenced by bleaching.

Overall, EOW seems the most likely identification of this interesting bird and DNA analysis will hopefully confirm this. Western Olivaceous Warbler seems unlikely, especially as this species is not meant to tail pump (a feature again noted by Nick and Elizabeth Riddiford when they relocated the bird in their garden in Schoolton).

Another fine day for Fair Isle

If accepted, these would represent the fourth and 18th records of Eastern Olivaceous and River Warbler for Fair Isle respectively – both really rather impressive tallies. Fair Isle is always capable of some magic moments and, particularly in late spring, any small falls can be disproportionally skewed towards rarer migrants, but to have these two rarities in the hand at the same time was a rather special moment. It was especially pleasing that a number of staff, islanders and visitors were all able to enjoy them at the Obs, despite the current lack of a building, a reminder that our work goes on and that the Obs is aiming to be fully operational again in just under two years' time.

I'd like to thank the wardening team of Richard Cope, Chris Dodd and Max Hellicar, all of whom left the Obs before seeing the River Warbler (despite it being a potential lifer for a couple of them) so we could carry on with the important seabird monitoring work that dominates the workload at this time of year. Also, thanks to visiting BTO staff Sarah Harris and John Calladine, as well as ex-FIBO Wardens Deryk Shaw and Nick Riddiford, who provided helpful input while the bird was being processed.

Thanks are also due to the many people in the birding community who have helped us get back on our feet this year and enabled us to keep carrying out our work. Spurn Bird Observatory, Porzana and the BTO were quick to sort us out with ringing kit, while Flamborough Bird Observatory have sent field guides and were among the many organisations and individuals to send donations, while many others have also offered help as we go through the rebuilding process.

Find out more about Fair Isle Bird Observatory at www.fairislebirdobs.co.uk. You can make a donation to the Observatory here.