There is something about birding Lanzarote that really appeals to me; perhaps it's because it has a certain bleakness comparable to some of the places I like birding in the far north of Europe. One is never going to amass huge numbers of species during a trip to the island, and one often has to work to find the birds. Often considered by birders as second rate compared to Fuerteventura, it perhaps does not receive the attention it deserves.

My fourth trip to Lanzarote, between 3rd and 16th March, was yet again primarily a family holiday. As always, I managed to get out and about most mornings, largely on a hired mountain bike in the immediate area of Playa Blanca. The difference with this trip was that I finally made it to the island during a migration season — all previous visits, thoroughly pleasant though they were, have been in very late autumn or winter. The changes in the birdlife were quite noticeable, with some normally common species few and far between whereas there was a distinct increase in the number of migrant passerines. Examples of the former were Little Egret and Sandwich Tern, normally seen everywhere but much more limited this time around.

Needless to say, of the 64 species I managed to identify — the most I have seen during a holiday there — many were Lanzarote ticks for me.

On this visit, as previously, I took A Birdwatchers Guide to the Canary Islands along, a quite useful guide but, as ever, I felt that it is starting to lag behind the times and the species status list rather conflicts with present-day status in places. It may be that some of the localities mentioned in the book are seasonal, or perhaps it is just the vagaries of fortune that give me a different impression of some of the localities and species.

Most of the sites I covered were within 15km of Playa Blanca, although I did visit a couple of sites I had not been to before during a morning out in a hire car. The most productive spot was Salinas del Janubio, a cycle ride of almost half an hour north of Playa Blanca. The salt works and lagoon were consistently productive and never disappointed. Breeding and migrant waders were the main feature here, but a wide variety of other species were also seen.

The resort of Playa Blanca provided some decent birding at times and highlighted perhaps the only advantage of the continued development — namely the increased feeding habitat for migrants. The new (and small!) golf course on the seafront, as well as hotel gardens, showed the potential of the area for migrants. 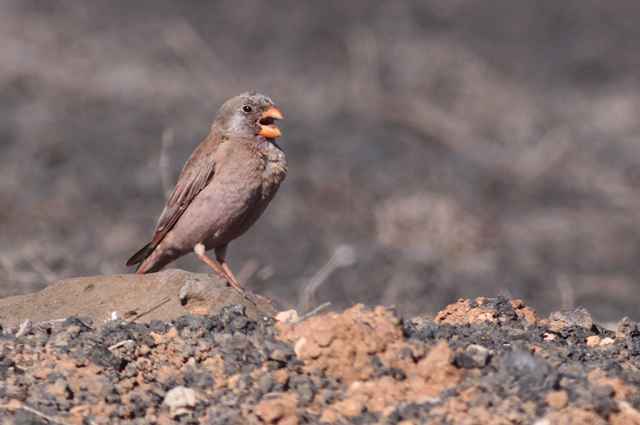 Flocks of Trumpeter Finches were often seen around construction sites around the edges of the resort.

Seawatching from Punta Pechiguera proved quite productive, but rather limited without a scope. Good numbers of Cory's Shearwaters and small numbers of Gannets were the main fare here.

Just to the east of Playa Blanca is the Los Ajaches National Park, where there are some wonderful beaches that are popular with tourists, nudists and, at times, birds. The plains here produced some good sightings, including an Egyptian Vulture, Barbary Falcon and an unidentified large raptor. The scrub immediately behind the beaches was obviously attractive to migrants, although one species I have "always" seen in this area, Spectacled Warbler, was strangely absent this time — though plentiful in the north of the island.

I didn't give the plains immediately to the north of Playa Blanca the attention I normally do, and this may be the reason for the lack of bustard sightings in the area this time around. It was here, with a lot of legwork and a little luck, that I managed to connect with one of my all-time Lanzarote favourites — a small flock of Cream-coloured Coursers — in exactly the same spot as I had found them on a previous trip.

A couple of mornings with a hire car were used to explore some areas further away, including the obligatory and now traditional trip to the plains south west of Teguise. This locality ticked all the boxes as usual, with highlights being the cracking Houbara Bustards and superb views of Stone Curlew. 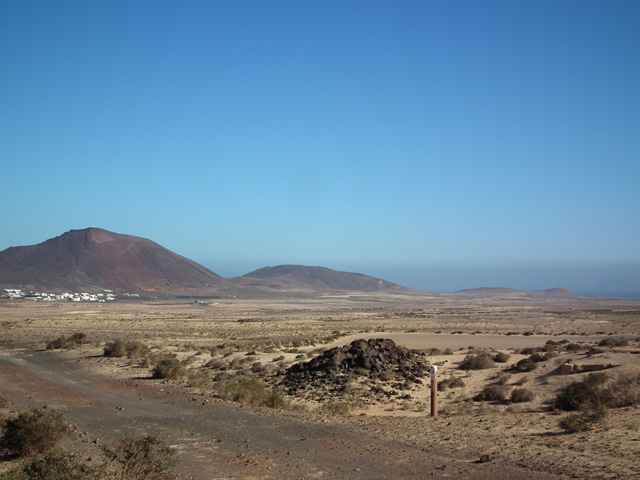 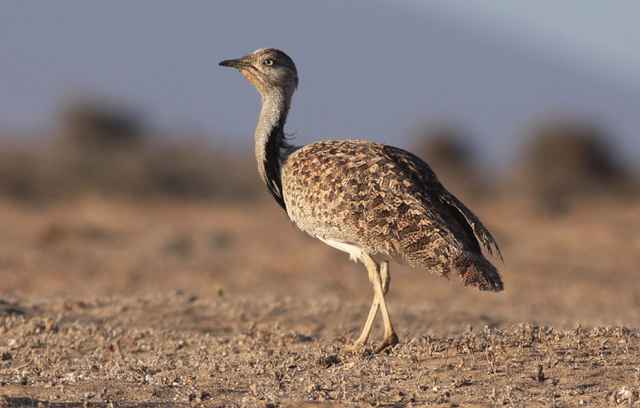 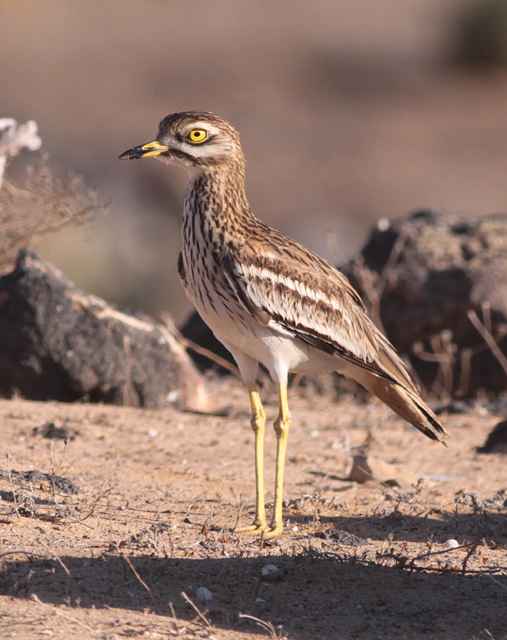 The following day I visited Mirador del Haria for the first time. This turned out to be a superb locality, producing plenty of Spectacled Warblers, Barbary Partridge, African Blue Tit, Canaries, and Sardinian Warbler along with a number of migrants. 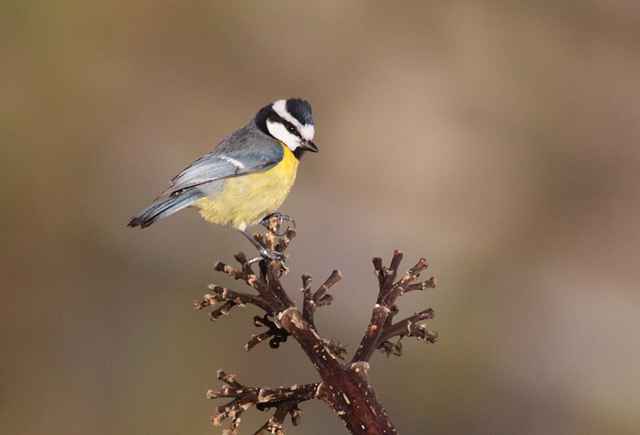 African Blue Tit, formerly considered a race of Blue Tit, it is now considered a full species. This was the first time I have seen this species on Lanzarote.

Continuing on from here I visited a couple of spots along the Famara cliffs; the views were as good as ever but, as on previous visits, failed to produce anything much of interest. I also made a number of random stops here and there, something that fired my enthusiasm for further exploration on future trips.

Finally I visited the saltpans at Los Cocoteras, which were most disappointing: perhaps because of the time of day or because there was ongoing work there. These saltpans are much smaller than at Janubio and seemed generally less productive. However, the locality has a proven track record and should not be dismissed on the basis of one visit. 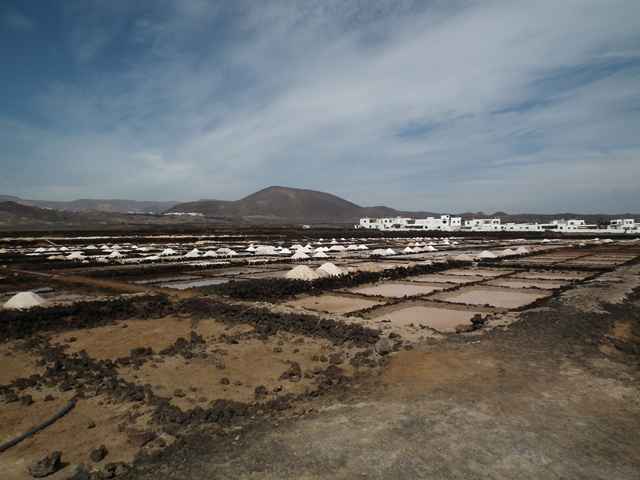 A family day out to Ranchos Texas Park turned out much better than anticipated: the place was heaving with migrants, which I tried to get to grips with in between the various shows. As one of few vegetated areas at this end of the island it was obviously an oasis for tired passerines.

Houbara Bustards gave wonderful views near Teguise, but for the first time I did not see them on the plains north of Playa Blanca. Whether this is a seasonal thing, or whether the massive ongoing developments have finally taking their toll, will take further visits or local knowledge to confirm. Paradoxically there are signs everywhere requesting that consideration is shown...a whole different ball game than with planning permission it seems!

I found both Cream-Coloured Courser and Barbary Falcon in the area immediately around Playa Blanca, the latter also once at Janubio saltpans. African Blue Tit was rather local and, away from Mirador del Haria, I only saw one surprise bird in the grounds of our hotel. 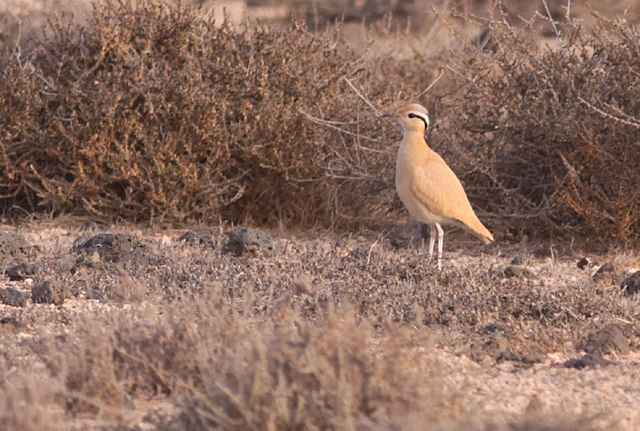 Berthelot's Pipit, Lesser Short-toed Lark and Trumpeter Finch were quite numerous and seen pretty much everywhere. Lark flocks were largest on the plains south west of Teguise, but smaller numbers were common more or less everywhere else. 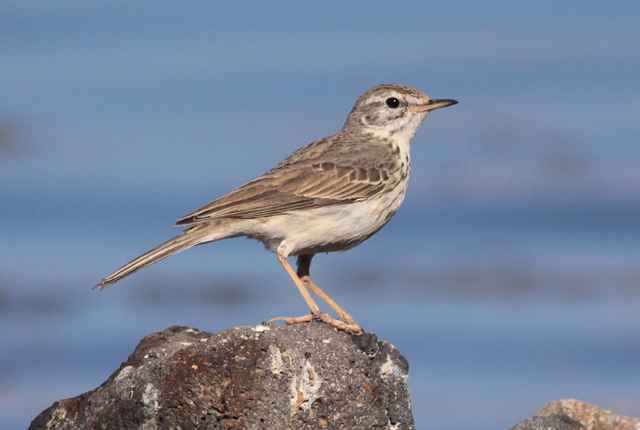 Swifts on the island were elusive: apart from a party of three Pallid Swifts over the resort swimming pool, only one unidentified swift was seen from the bus on the way to the airport as we left. 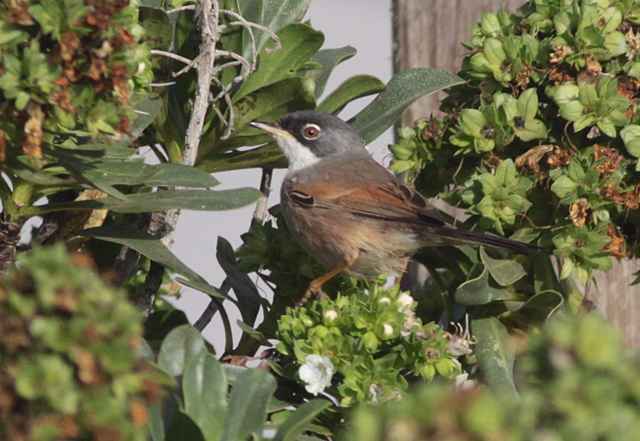 Male Spectacled Warbler — a widespread species in the north of the island. 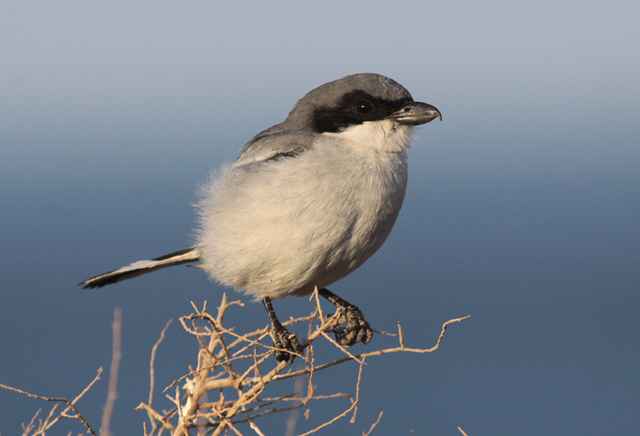 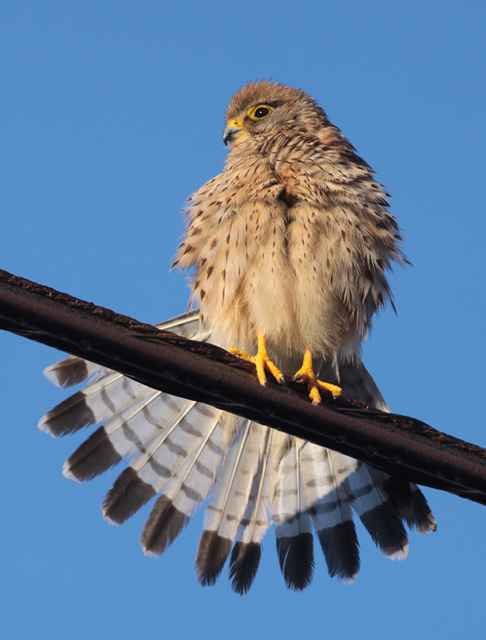 Even the standard Lanzarote fare, such as Southern Grey Shrike and the local race of Kestrel, are a brilliant experience. 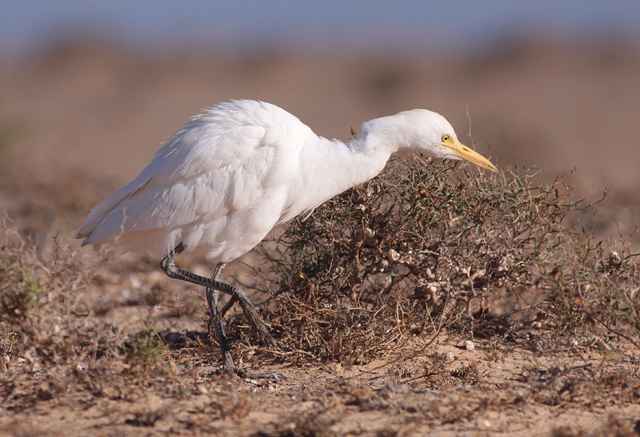 Highlights of the trip in a Lanzarote context included Avocet, Black-tailed Godwit and Green Sandpiper on Salinas del Janubio, where I also had a (the?) pair of Ruddy Shelduck. A Wood Sandpiper flying over Rancho Texas was another good wader for the island. 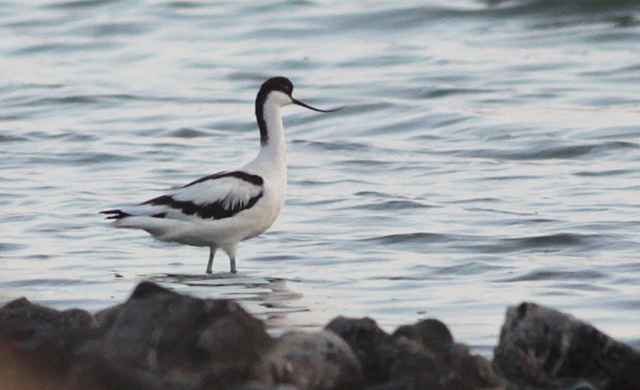 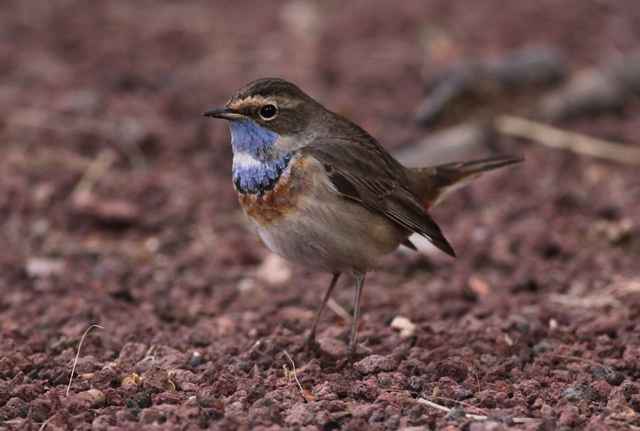 Migrant White-spotted Bluethroat in the grounds of "Rancho Texas" park. 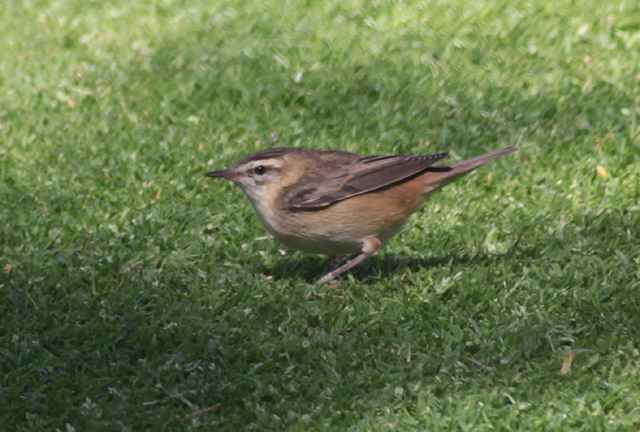 Sedge Warbler on the golf course at Playa Blanca — a rare passage migrant according to the Birding Lanzarote blog. 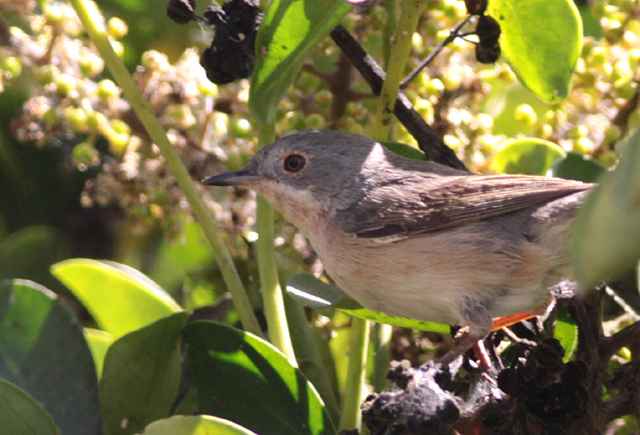 Small numbers of Subalpine Warblers such as this one were among my personal favourites.

Having left the north in the grip of winter, it was wonderful to get a head start on the spring migration. Even from Day One there were small numbers of Willow Warbler and House Martins to be seen, but this proved to be just the beginning.

After a period of strong easterly winds, typical for the time of year, during the first week of our stay it became more obvious that spring migrants were on the move. Numbers of Willow Warblers, Tree Pipits and Yellow Wagtails increased steadily during the period. Hirundine numbers also went up and included a couple of Sand Martins, another species regarded as a scarce migrant on the island. Northbound waders were apparent at the Janubio saltpans, where numbers swelled and dropped again as birds passed through. 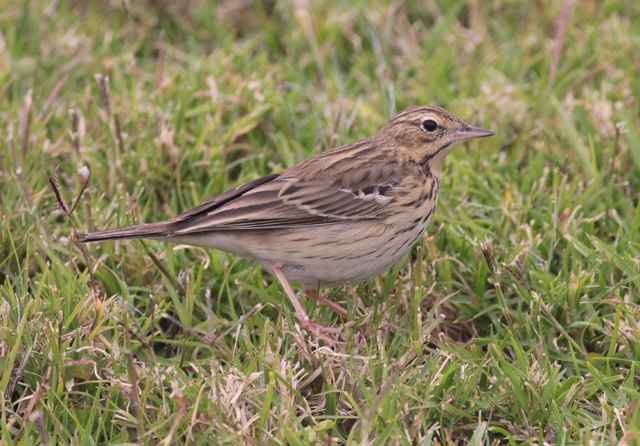 Migrant Tree Pipit on the coast at Playa Blanca. 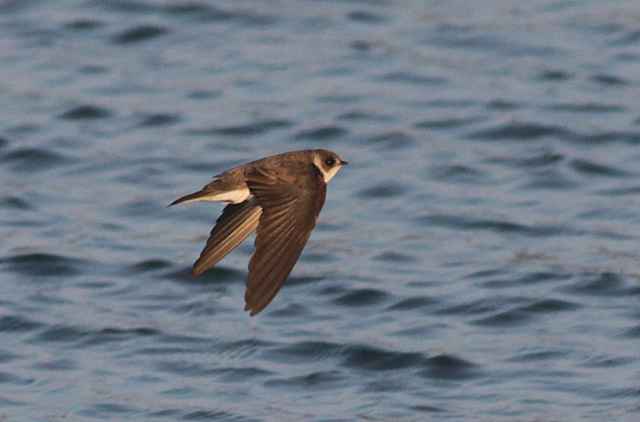 It was not just new birds I had during this trip, but for the first time I saw an Algerian Hedgehog that was not roadkill! A pre-dawn cycle ride along the promenade produced this lovely creature scurrying about its business. Huge numbers of dolphins, probably Bottle-nosed, were seen offshore on both occasions I seawatched from Punta Pechiguera. 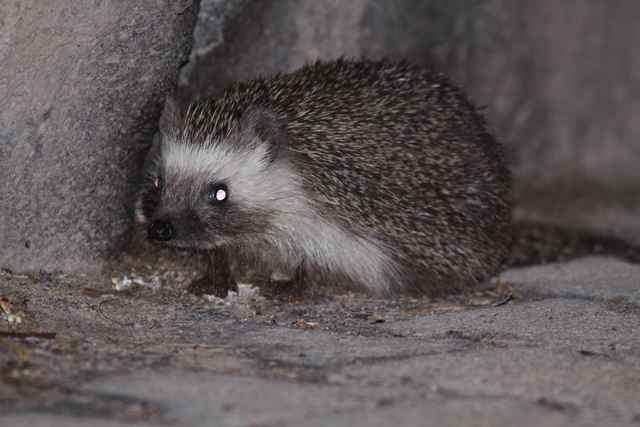 Algerian Hedgehog on the seafront at Playa Blanca. 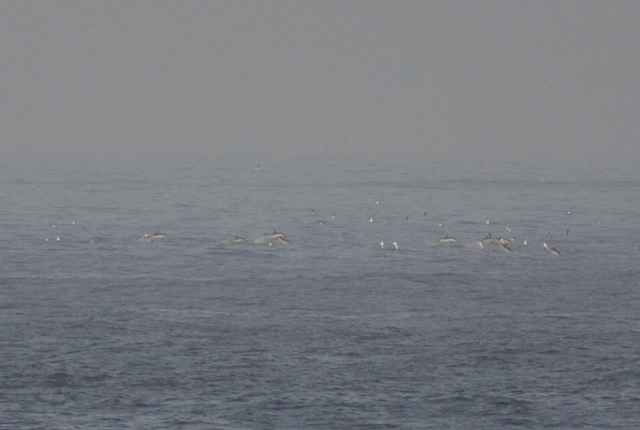 I am no expert but these look like Bottle-nosed Dolphins — surrounded by Cory's Shearwaters.

Haria Lizards were as plentiful as ever and a few Eastern Canary Geckos were also seen, the latter invariably around the hotel. 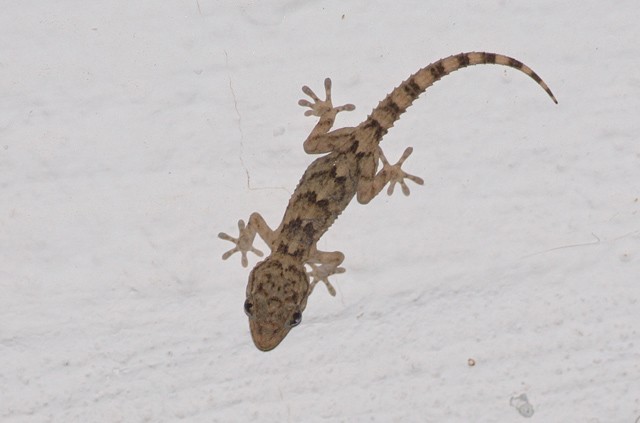 As always I left the island hoping to be back — but next time I will try harder to make it during a migration season.