A remarkable new study, published in the Dutch ornithological journal Ardea, has revealed that Arctic Terns breeding in the northern part of The Netherlands are following previously unknown routes to their wintering grounds in the Antarctic. Seven terns were fitted with geolocators in 2011 and all the birds were recaptured in 2012; of the five devices that gave information, it was revealed that two individuals had passed the southern Australian coastline and one individual had even reached New Zealand before returning to the Southern Ocean! The abstract of the study can be read below:

"Arctic Terns Sterna paradisaea have an exceptionally long distance migration, annually travelling back and forth between the Arctic and the Antarctic. Birds from Greenland, Iceland and the USA were recently found to spend most of the non-breeding period in the Weddell Sea, a small part of the large Antarctic range of Arctic Terns. Based on ring recoveries and sightings of West European Arctic Terns in the Indian Ocean and Australian waters, we expected that terns from The Netherlands (the southern limit of the breeding range) inhabit different Antarctic regions during the non-breeding season to their conspecifics from Greenland. To find out, geolocators were deployed on seven Arctic Terns captured on the nest in 2011 in The Netherlands. All birds were recaptured in 2012 and five devices yielded information on migration routes. The tracked terns spent on average 273 ± 7 days away from The Netherlands, and visited known staging areas in the North Atlantic and the Benguela Current, on both the outward and return journey. Similar tracks were observed in the terns from Greenland. However, hereafter the terns from The Netherlands moved to a previously unknown staging area in the central Indian Ocean, between 20–40°N and 65–100°E, and spent most of the non-breeding season in the Southern Ocean between 35–150°E. One bird migrated as far as New Zealand. Eventually, all five birds spent the Austral summer in Wilkes Land, Antarctica, before flying back to the breeding colonies with a small detour to the same North Atlantic staging area they visited on their southward migration. The total travel distance in the course of the non-breeding period was ~90,000 ± 2000 km, which substantially exceeds previous estimates for this species. Our study revealed new offshore staging areas and a yet unknown route through three different oceans, the longest bird migration described thus far." 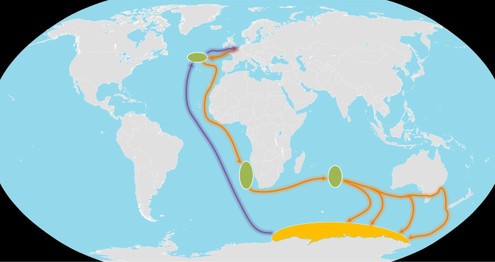 The full study can be accessed online here.