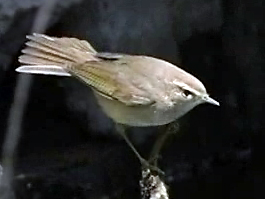 The occurrence of a 'Sibe' is always an exciting annual event, not just for its rarity status, but also to marvel at how far the small bird in front of you has travelled to provide you with a wonderful experience. Dusky Warbler (Phylloscopus fuscatus) is one of a number of Sibes which nowadays reach northwest Europe on an annual basis, and this autumn has provided a record number of sightings along our coastline with at least 32 records in Britain.

Dusky Warbler is a rare vagrant to Great Britain with 224 accepted records by the end of 2000 (Report on Rare Birds in Great Britain in 2000). The first record for Europe was a bird on Auskerry, Orkney, on 1st October 1913. The second British bird was not recorded until 1961, since when there has been a dramatic upsurge in sightings. For example, 7 in 1982 was considered exceptional at the time, but influxes of 19 were noted in 1990 and 22 were found in 1994.

The reasons for the increase are not clear, but it is widely accepted that it is not due solely to observer coverage and links to global warming have been suggested. Arrivals are now starting to occur earlier than previously. Typically, Dusky Warblers arrive between mid-October to early November, generally later than the equally rare, and similar, Radde's Warbler P. schwarzi, though a small proportion have been in late September. It is clear that larger numbers of Siberian birds are undertaking a reverse migration through northwest Europe than ever before, the full reasons for which are not fully understood. The breeding range of Dusky Warbler extends from west-central Siberia eastwards to northeast Siberia. Migration is typically southeastwards and in winter it can be found skulking in any form of lowland habitat from northeast India to northern Southeast Asia. Birds occur in northwest Europe because of reverse migration, which is when an autumn migrant heads off in completely the opposite direction to the course that it should have done.

Perhaps not the most exciting species of bird for many, it is one of those annoying 'skulking little brown jobs' which can try the patience due to their devilishly elusive nature. However, a good view can reveal a suite of subtle identification features and trying to watch a bird for long enough to note all of the features can always present a nice little challenge. Dusky most closely resembles a drab Chiffchaff P. collybita in size and structure, but is colder brown above, with dull greyish-white underparts, often with subtle buffy flanks and undertail. It has a narrow pointed bill, and a long supercilium which is whitest above the lores, and legs that are neither particularly pale nor strong looking. Extremely skulking, it is usually first located by a harsh 'tec' call which resembles two pebbles being struck against each other. When the bird is located it often keeps low in cover, frequently flicking its wings in a nervous fashion. However, they can also be found feeding in the canopy and later birds can often associated with tit flocks. Dusky can also be confused with the similar Radde's Warbler, which is generally larger and stouter, with thick pale legs, a short stout bill, apricot washed undertail coverts, and a bolder supercilium behind the eye. In addition, Radde's is more sluggish in movement and has a more nasal 'tchuk'.

Prolonged bouts of east and southeasterly airflows coupled with huge areas of high-pressure weather systems have resulted in no fewer than 32 birds being reported this year (note that these are subject to acceptance by the British Birds Rarities Committee). Sightings tended to arrive in two main batches, the first of which was between 22nd and 29th September was very early for the species. Arrivals from mid-October conformed more with previous arrival patterns.

The majority of the records typically occurred along the English east coast counties with most between Norfolk and Kent. Across Europe, at least 15 other birds were reported from France to the Scandinavian countries, with at least half a dozen birds in Belgium. Perhaps, the location of a wintering bird might not be too unusual following the events of the past two months?

What caused this influx? Was it perhaps indicative of an exceptional breeding season? The number of birds seen presumably only represent the tip of the iceberg in terms of the actual numbers involved. Despite the autumn proving awesome for the range of rarities that occurred it was surprising that large numbers of other Sibes did not arrive, with no apparent influxes or record numbers for any of the 'commoner' rarities, although good numbers of Radde's Warblers were noted, mostly part of an early arrival. The complexity of bird movements never ceases to amaze!