Thousands of birds are homing in on garden feeding stations as Arctic conditions persist. Latest results from the year-round British Trust for Ornithology (BTO) Garden BirdWatch survey show a mass influx of many familiar species as they struggle to survive.

The current cold snap could not have come at a worse time for birds. Late winter is a period when natural foods are scarce. Seeds and fruits that were abundant during autumn have been depleted over winter, while many insects — which are cold-blooded and, therefore, are slower to emerge when the weather is cold — are yet to appear this year. The double whammy is that birds are not just thinking about survival at the moment: they are also thinking about sex. Males want to be devoting their time to singing in order to claim and defend their territories, while females want to be feeding up to gain enough nutrients to lay their eggs. Amid the unseasonably cold conditions, many birds are being forced to postpone nesting activities and, instead, to focus on survival. 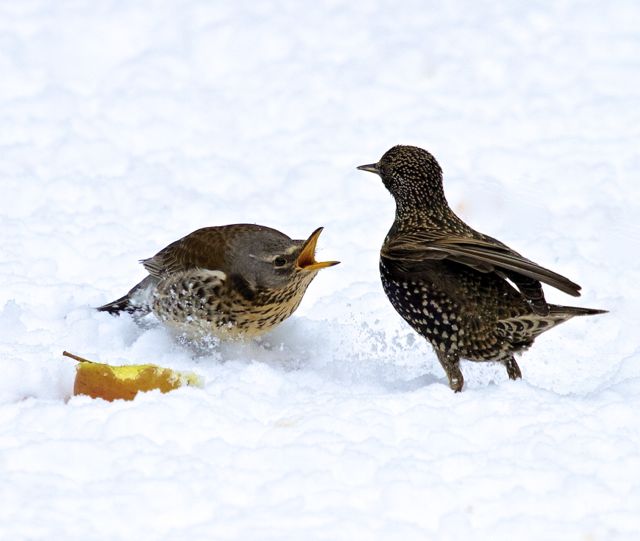 Thankfully — as is so often the case — food provided by householders is providing vital support. Latest results from the BTO Garden BirdWatch survey show that visitors ranging from the tiny Long-tailed Tit to the portly Woodpigeon have been spotted much more often in gardens over the past fortnight compared with the previous three-year average.

Dr Tim Harrison of the BTO Garden Ecology Team commented: "Mid- to late March is a terrible time of year for such testing weather conditions to set in. A few months ago birds were essentially focused solely on survival but now they are also trying to get on with nesting, with some still needing to migrate to their breeding grounds. Thanks to citizen scientists who take part in the weekly BTO Garden BirdWatch survey, we have been able to chart this critical period in unique detail. The most remarkable increase has been in the Siskin, which visited almost two in five gardens last week — its highest reporting rate since 1995. Its cousin, the Goldfinch, has also been seen in large numbers, delighting over two thirds of householders last week."