In a novel study just published in Ibis, Chas Holt of the BTO has shown how deer browsing affects the distribution of woodland birds. Nightingales in a Suffolk wood spent most of their time in the tiny part of the study area from which deer had been excluded, preventing browsing access to the understorey habitat. 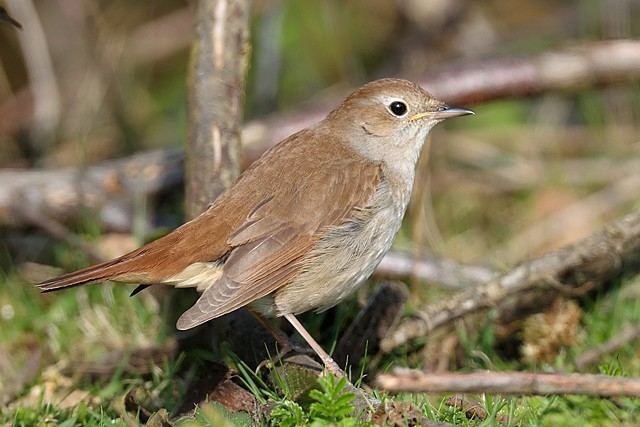 By mapping territories and attaching radio-tags to Nightingales in a Suffolk wood and tracking their movements Chas Holt, a research scientist working for the British Trust for Ornithology (BTO) who is undertaking this study as part of a PhD with the University of East Anglia, was able to look at the interaction of deer and Nightingales. Paired plots of coppiced woodland were created, from half of which deer were excluded. The density of Nightingale territories in deer-free areas was fifteen times greater than in the paired sample plots. Looking at Bradfield Woods as a whole, Chas found that Nightingales spent 69% of their time in the 6% of the woodland from which deer had been excluded.

Chas Holt said: "The study provides compelling evidence that increasing deer pressure can have a major effect on local Nightingale populations, and potentially those of other woodland species too. Deer can reduce the suitability of woodland by eating the low vegetation that forms a critical part of the Nightingale's habitat. When added to the other pressures being faced by migratory birds that winter in Africa, it is not surprising that population levels of some species are falling rapidly."

Paul Dolman said: "Deer populations are rapidly increasing in the UK, as well as elsewhere in Europe and North America, and this is having significant effects on woodland biodiversity including ground flora, small mammals and bird communities. This study is the first of its kind, using radio tracking in an experimental context, to demonstrate how deer browsing changes habitat suitability for an iconic bird."

The rich and complex understorey of plants such as brambles, honeysuckle and rose has been a traditional feature of coppiced woodland, providing nesting sites for secretive Nightingales and insect-rich feeding habitats. As deer numbers have risen, such low-level vegetation and low shrubs have been increasingly reduced by browsing, often leaving a bare woodland floor and fewer hiding place for Nightingales.

In the last Nightingale survey in 1999 there were estimated to be 6,700 singing Nightingales in Britain. Preliminary results from the ongoing Atlas of Birds in Britain and Ireland 2007-11, organised by the BTO, indicate that there has almost certainly been a substantial decrease in the national population since the 1999 survey.

Nightingale is one of the species that is being studied as part of the BTO’s Out of Africa initiative.