Much looked forward to in winter, the arrival of wild swans on our fields and waterbodies is just unusual enough to provide a frisson to anybody’s day out birding.

Bewick’s Swan, arriving from the Russian and Asian tundra, is the smaller of the two wintering species – though both are very large – and gives a more goose-like impression. Like the bigger Whooper Swan, the adult is snow white all over. Bewick’s has a shorter neck and proportionately bigger head than Whooper, as well as a smaller body and bill. However, this can be difficult to appreciate on lone birds or in single-species flocks, and it is the bill pattern to which many must turn for a firm identification.

A basal yellow beak patch is common to both species, but Bewick’s has the colour extending to less than half the length of the black bill, and it generally has a squared-off appearance, always finishing behind the nostril. The beak itself is subtly more slender with a slightly retroussée shape. Whooper Swan’s beak is more of a Roman nose, with the yellow extending in a pointed wedge shape to the very front of the nostril. The beak shape itself is longer and more triangular than Bewick’s.

Whooper is a larger species with a very long neck, often held erect, and a bulkier body and longer legs, making it stand out straight and tall when the two species are together.

Juveniles of the two are perhaps even more easily confused as their features are blurred by their generally murky grey-brown appearance. However, the bill patterns are mirrored in grey (for the yellow pattern) and dark reddish-brown (for the black), and the youngsters also show the adults’ overall size, shape and build.

It is perhaps less appreciated that the two species differ also in voice, with Whooper Swan in particular letting rip with a low, usually trisyllabic, honking bugle, frequently given in flight. Bewick’s call less often, and the sound is higher in tone, though similar and given in ones and twos. 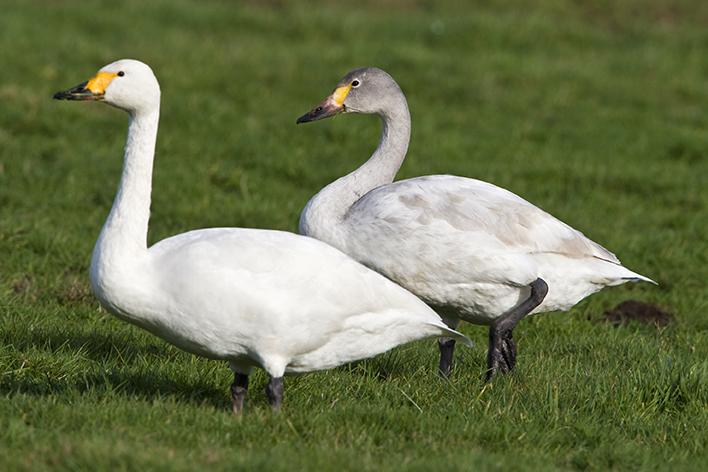 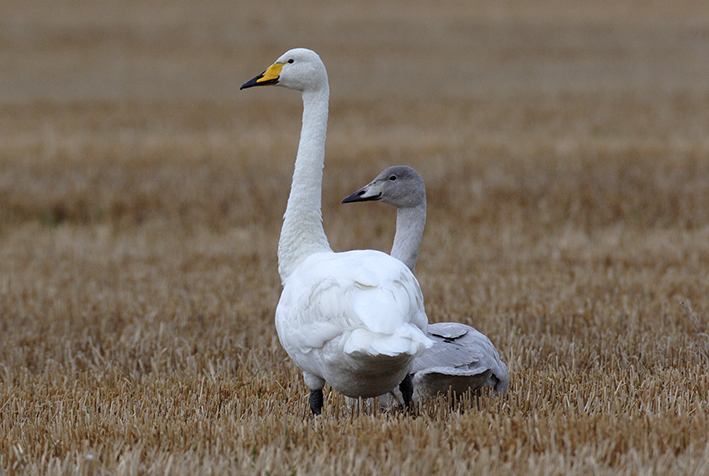