Autumn 1998 was one of the best autumns in terms of the number of rarities that I saw that I have ever experienced. It started in late August, when a Baird's Sandpiper turned up on my local patch - Lound, Nottinghamshire. Then, a weekend excursion to Norfolk and Suffolk at the beginning of September yielded, among others, Black Stork, Red-necked Phalarope, Icterine Warbler, and a self-found Marsh Sandpiper at Cley Eye.

However, 27th September was to put all of these into the shade. My father and I set off for Spurn Point at 4:30 in the morning, eager to see the majority of the huge concentration of minor rarities that had been present there the previous day. We arrived at Easington Cemetery at 6:00 am, to be greeted by a male Red-backed Shrike - my first British record, though I had seen them in France three years previously. A nice start to a day that was going to get much better.

After a much-needed cup of coffee, we headed for The Lane at Kilnsea, where four Yellow-browed Warblers were reported the day before. No sooner had we stepped out of the car than a cacophony of pagers started blipping furiously. A male Subalpine Warbler had been discovered at the entrance of the Point that very morning. An ecstacy of fumbling ensued, when everyone rushed to their vehicles, searching their Goretex jackets for their car keys. We joined the pageant, and were treated to an absolute cracker of a bird!

This, I decided, was what twitching is all about - being in the right place at the right time, experiencing the birds' discovery. Yes! After watching this delightful bird for half an hour, we headed up the point to the Wire Dump, where a Rustic Bunting had been reported. This was the first bird that we actually had to work for. As a group of us searched the dunes, falls of hundreds of Goldcrests and Song Thrushes gave us first-hand experience of passerine migration, and then, turning my binoculars to what I thought was a Garden Warbler, I realised that I was staring right into the eyes of a Barred Warbler - another shattered arrival to the East Yorkshire coast. We observed this bird feeding in the buckthorn for a quarter of an hour, before resuming our search for the Rustic Bunting. 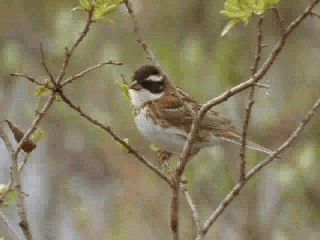 Having almost given up hope on it, we heard cries of "Look! On the wire!!" We followed their gaze, and there was the Rustic Bunting, complete with its mohican crown and white throat. Fantastic! My first lifer of the day, flitting around amongst a small flock of Reed Buntings and Bramblings. What happened next made the day for me. The Rustic Bunting flew into the depths of a bush, and out of the bush flew what we thought at first was a Song Thrush. Then, we saw subtle differences. Long tail, disproportionately long bill, deep chest . My father, myself, and one other observer all shouted "Richard's Pipit!" at the same time. It flew along the point towards the lighthouse. We gave chase down the beach, hoping to relocate it, but failed. However, it was a good view, albeit brief. Another lifer was in the bag for me. 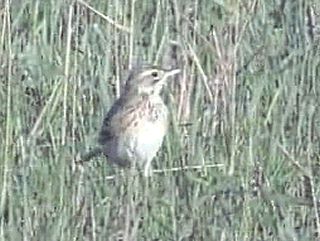 After this excitement, we needed a break, so we relaxed in the car park by the lighthouse, having a snack and a drink, watching parties of Snow Buntings and Whinchats fly past our car. Seeing that it was 11:00am, we decided to try for our next rarity - a female or immature Common Rosefinch, a lifer for both me and my father.

But, disaster! The bird had not been seen for the whole morning, so, with slightly less determination than before, we headed up the beach north of the seawatching hide, looking at every passerine which popped its head up. We saw more Snow Buntings, more Song Thrushes, Wheatears and our first Common Redstart of the day inside the migrant trap by the warden's hut. Then, looking at what he thought was another Wheatear, my father exclaimed "I've got it!". I saw what he was looking at. On a distant rock was a bird a tiny bit smaller than a Crossbill, with a double wingbar, chunky bill and a faint reddish wash on the breast. We had relocated the Common Rosefinch. After alerting the birders near us to its presence, it flew away, soon to be rediscovered again by some more birdwatchers. 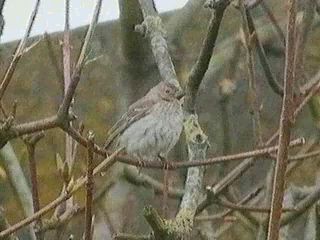 Feeling very pleased with ourselves, we headed back to the car via the migrant trap, hoping to relocate the Common Redstart again. Alas, it was not there. Instead, we clapped our binoculars on an adult male Red-breasted Flycatcher, perched at the entrance to the migrant trap! Yet another discovery for us! As we tried to get the telescope on it, it flew away, THROUGH the legs of our tripod, and fluttered up the beach, never to be seen again - demonstrating the white flashes in the tail as it went. We could not believe the day that we were having - we had never experienced anything like it before!

A considerable amount of time was then spent walking around the point taking in what we had seen - two hours' worth of time, actually. At 2:00pm, we took a last stop at Beacon Lane, and saw parties of Goldcrests and another Red-breasted Flycatcher - a juvenile, and one that had been present for four days. So, at 3:00pm, we went home, shattered, and highly chuffed.

I never saw the Yellow-browed Warblers, and they remained a bogey bird for me until 1st October 2000, when another autumnal trip to Spurn gave me my first view. Also on that day I saw 2 Radde's Warblers, huge numbers of migrating Pied Flycatchers, and my big discovery for that day was an Arctic Warbler! Not bad for a fifteen-year-old! I wonder what this autumn will turn up?