After reading several of the BirdGuides reports describing a variety of 'Days to Remember' I thought about contributing one myself. However, although I prefer to find my own birds (and don't even twitch local rarities) I've never found a real 'mega' that blows everything else away, so picking any one day presented me with a problem. What about those epic (but rare) spring seawatches on the south coast full of skuas, shearwaters and seaduck, or perhaps finding my first Richard's Pipit on an exposed Isle of Wight headland on a bright autumn day last year. Or maybe finding my 'most-twitched' bird, Britain's tamest-ever Purple Heron on Pevensey Levels in April '96 that was watched by over 200 people. I just couldn't decide, so instead I thought I would contribute an article that describes a day earlier this week, when I enjoyed some of the country's scarcest breeding birds all within a few kilometres of my front door. What's more, all were seen using a bike and my own two feet. Oh yes, it was also sunny and about 25°C which helps! 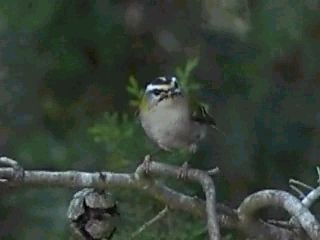 I started off at 6am by cycling to an extensive area of woodland (I can't disclose the site for obvious reasons). Early in the morning the air was still pleasantly cool and many birds were singing vigorously. I passed through an area of mixed pine and oak woodland and soon picked up the shimmering song of one or more Firecrests high overhead amongst the branches, although they were almost drowned out by the cacophony of noise coming from numerous Goldcrests, Willow Warblers, tits, finches and thrushes. Leaving the bike behind I set off across country. Singing Tree Pipit and Wood Warbler were soon added to the list, and another singing Firecrest was heard in a new area for me. A chattering family party of Great Spotted Woodpeckers joined a hunting Spotted Flycatcher on a dead tree, and a party of Crossbills 'chup-chupped' from a stand of dark pines. 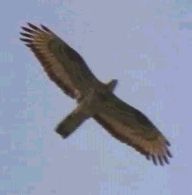 By mid-morning the air temperature was rapidly rising so I decided to find a good vantage point and spend some time looking for raptors. I chose an area of open heath overlooking a large block of woodland, and settled down in the shade of a well-positioned birch tree. This area was also alive with noise; Stonechat, Meadow Pipit and Tree Pipits were all around, and the melodic tones of a distant Woodlark could be heard intermittently. A chipping Snipe was in a nearby bog, and odd Siskins passed overhead. Scanning the horizon I picked up a dumpy finch in flight - my suspicion that it was a Hawfinch was confirmed when it briefly landed in the top of an oak tree, allowing me time to scope it briefly before it headed into the distance. Raptors started to appear shortly after. Buzzards were everywhere (at least 15 in total during the morning) and Kestrel, Sparrowhawk and a couple of Hobbies were also seen soaring in the ideal conditions. Just before lunch another large raptor came up from behind a stand of pines - a superb Honey Buzzard. It spent ten minutes or so circling over its territory before swooping at something lower in the sky. I managed to keep the scope on it in time to see it tumbling in mid-air with a Hobby. It continued to harass the Hobby for a few more seconds before the falcon thought better of it and rapidly slunk away into the treetops. It was now pretty hot so I decided to head back into the woodland, and the welcome shade. However, the birding wasn't over. At lunchtime, a sleepy Tawny Owl half-heartedly singing in the distance was soon blocked out by the falcon-like chatter of a male Lesser Spotted Woodpecker. Dropping my sandwiches, I soon located it in the top of a pine tree, where it was joined by a female bird before both headed deeper into the woods. Things then started to go quiet as the heat of the day kicked in, so I decided to head home and catch an hour's sleep before heading to the coast nearby in the evening.

At about 7pm I arrived at the coast to find a flat calm sea, five Gannets and lots of tourists. I decided to try my luck at a nearby reedbed instead, in the hope of picking up one of the many Rose-coloured Starlings in the country within the Starling roost. Despite scanning through several hundred incoming Starlings I couldn't find anything odd, but I did get my first returning wader of the autumn, a fly-over Green Sandpiper, and also a couple of Sand Martins that may have been heading back south. The regular Bearded Tits were pinging away, and a fluffy juvenile appeared briefly on a reed stem. Cetti's, Reed and Sedge Warblers were singing everywhere and a Water Rail squeaked. As the air began to cool a multitude of biting insects emerged so I returned to the beach. Little Terns were scurrying to and fro from their nesting colony on a shingle bank, while a fine male Eider sat offshore with a couple of females.

As the sun sank below the horizon I reluctantly returned home, but was abruptly halted on the way by a male Stag Beetle hovering at head height in the road ahead. As I watched it circling around a street lamp it was joined by another, and they continued to slowly meander across the road startling passing motorists and small boys on BMXs. What a way to finish a great day!

If you have had a particularly memorable day in Britain and Ireland then we would love to hear from you. It does not have to be about rarities, it could be an exciting movement or fall of commoner species, a seawatch, or an exceptional day at your local patch. Alternatively, it could be about a journey to see a particular rarity, or an account of finding a rarity. Please send your articles to sightings@birdguides.com with 'Days to Remember' in the subject heading. Unfortunately we can not guarantee to publish all articles submitted to us.
Written by: Russell Wynn
Login to leave a comment
Return to List