Common Swifts fly for 10 months without a break

A new study has confirmed that Common Swifts can spend up to 10 months in the air without landing.

The research, published in Current Biology, involved attaching tiny geolocators to swifts in southern Sweden. The tiny logging devices, weighing just a matter of grams, are part of a revolution in miniature electronics that are enabling scientists to track smaller and smaller birds.

The loggers include an accelerometer, to record movement, and a light sensor. Given the duration of the day and night and the time of year, scientists can determine the north/south position. Noting when the sun is at the midday position gives an east/west location.

In 2014 and 2015, the team recaptured 19 swifts carrying these data loggers and found that, as expected, the birds were spending their winters in West Africa.

Dr Anders Hedenström, a biologist at the University of Lund, and his team reported that three of the 19 birds never rested. Some did rest occasionally at night for brief periods, but the data loggers showed that all the birds stayed in the air for over 99 per cent of the time when they weren't nesting. 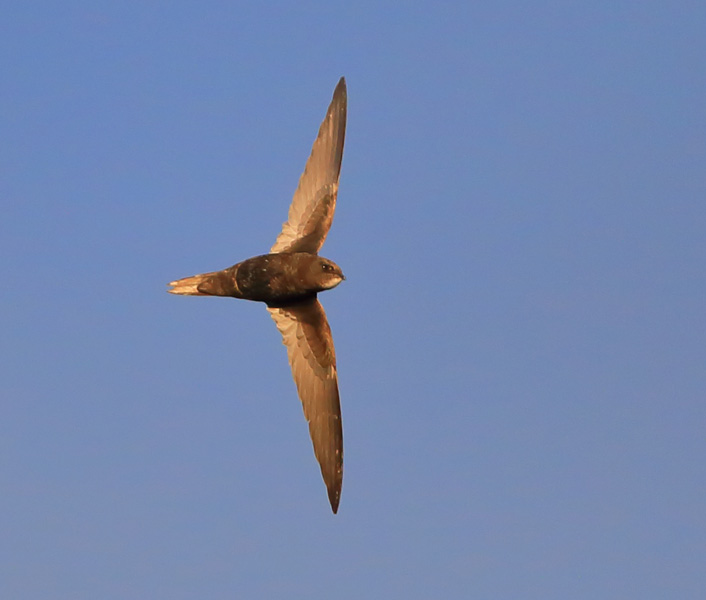 The new study confirms the suspicions that Common Swifts can spend up to 10 months in the air without landing (Photo: Mike Trew)

The data confirms what has long been predicted — that the birds stayed aloft when not nesting. It also endorses the use of geolocators as an invaluable tool for monitoring birds' movements — to put it into context, around 50,000 Common Swifts have been ringed in Sweden over the past century, but only one ringed individual had ever been recovered south of the Sahara.

The recordings also showed that long ascents by swifts, observed during the summer, happen throughout the year. During these ascents, often at twilight, the birds climb up to almost three kilometres in altitude.

Dr Hedenström speculated that the birds may ascend to such heights to sleep safely. How birds cope with the need to sleep remains a mystery. A recent study showed that frigatebirds can sleep on the wing, albeit for much shorter periods than they do when on land. Currently the recording devices that observe brain activity weigh too much to fit to swifts, but this may well change in the future.