These three closely related shorebirds are very similar in size, structure and plumage. Common Sandpiper is the most familiar in Britain and Ireland, but the North American Spotted Sandpiper and Asia's Terek Sandpiper, though rare do both occur, especially during migration periods. Their close resemblance combined with the unfamiliarity of the second two can cause identification conundrums. Andy Stoddart has all the information you need to recognise all three species in all plumages. 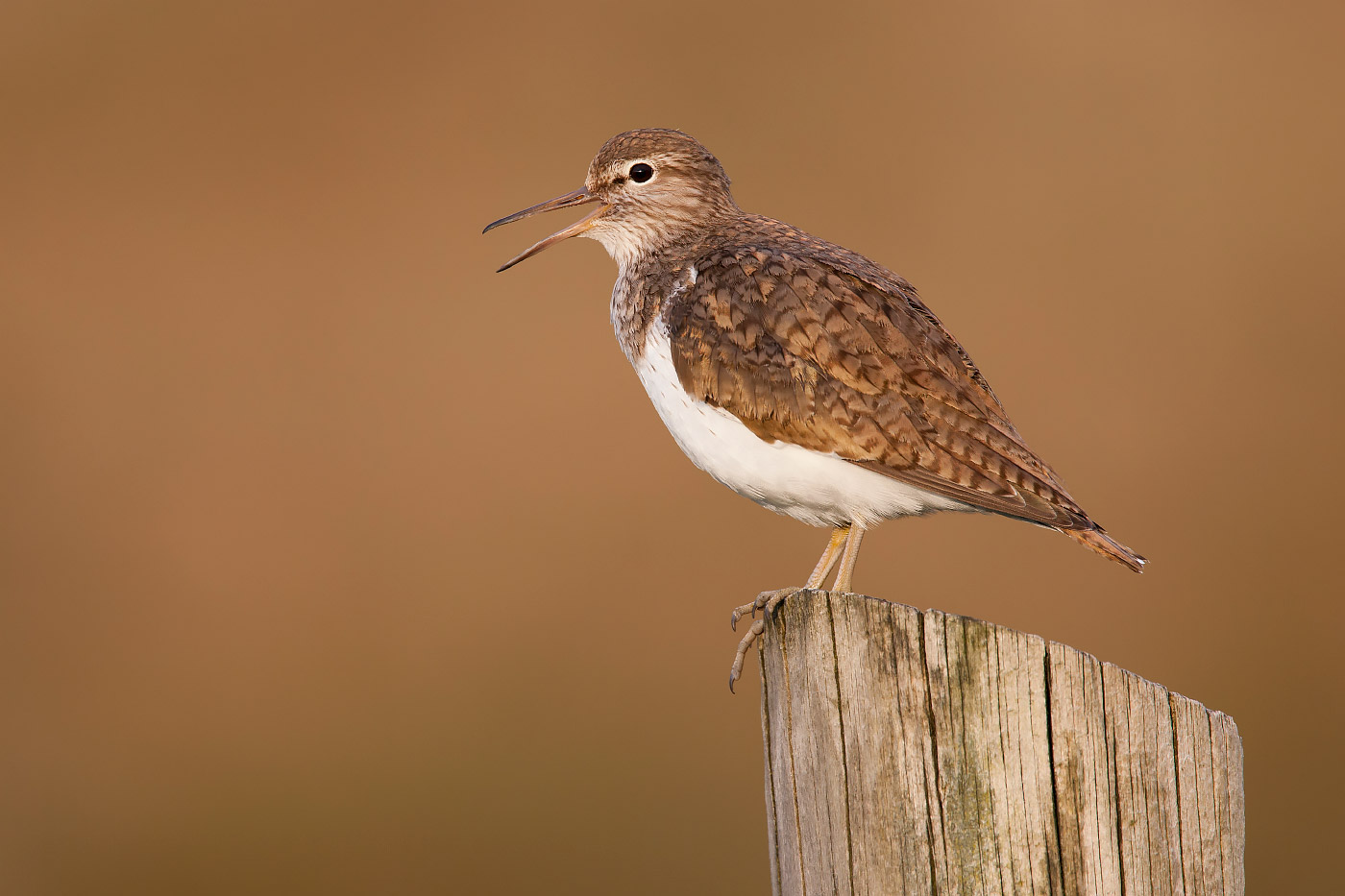 Adult summer Common Sandpiper (Skye, Highland, 10 May 2008). This is a classic portrait of a Common Sandpiper. Just like Common Snipe and Common Redshank, this species will readily perch on posts on breeding grounds (Oliver Smart).

This trio of 'bobbing' sandpipers forms a distinctive group within the wader family. Common Sandpiper is a familiar bird in Britain, but an encounter with either Spotted or Terek Sandpiper here would make for a memorable day.

This species has a large breeding range, extending from Ireland in the west to Kamchatka in the east. It is a long-distance migrant, wintering throughout central and southern Africa, the Middle East, South and South-East Asia, Indonesia and Australasia.

Despite its name, however, this is a relatively scarce breeding species in Britain, confined to upland areas in the north and west. It breeds largely inland along gravel-shored rivers and lakes, sharing  these freshwater habitats with such species as Dipper and Grey Wagtail. It is a relatively early migrant, arriving mainly in April and departing in early autumn, although a very few remain here in winter.

It is most familiar in Britain as a passage species and at such times can be encountered commonly in coastal regions, its numbers augmented by migrants from the Continent. It is a conspicuous species, typically seen feeding along the muddy fringes of creeks and pools and performing its characteristic nervous 'bobbing' action.

This is a small wader, only fractionally longer than Dunlin. It has a highly distinctive structure, though, comprising a small head on a large, oval body, a short neck, medium-length bill, long tail projecting well beyond the wing-tips and relatively short legs. The stance is invariably horizontal and rather 'crouched'.  The bill is dark with a pale base and the legs are typically greyish-green.

Its plumage is relatively dull – pale mud-brown above and white below, with obvious brown breast-side patches and a rather plain-looking face. As such it most closely resembles an over-sized Temminck's Stint.

The sexes are indistinguishable and there is relatively little age or seasonal variation. However, summer adults develop a complex pattern of dark internal markings in the upperparts feathers. Juveniles and winter adults are plainer above, the former having a characteristic 'dogtooth' pattern along the outer webs of the tertials.

The flight action is very distinctive: a 'flicking' action on bowed wings low over the water. In flight, the white wing-bar extends across the full width of the secondaries, reaching the body. There is also a white trailing edge to the secondaries and prominent white sides to the tail.

The species normally draws attention to itself by its call – a loud, high-pitched ringing swee wee wee.

This is the Nearctic counterpart of Common Sandpiper. It breeds throughout North America from Alaska to Newfoundland and winters in the southernmost United States and Central and South America. Like its Palearctic cousin, it breeds along rivers and lakes and frequents more coastal habitat on passage and in winter.

It is a rare bird in Britain, with just over 200 records in total and around half a dozen occurring each year. Records peak in spring and autumn, but there are a good number of summer records too and it is also not infrequent in winter. Any wintering 'Common Sandpiper' should be carefully checked for this species.

Unlike many Nearctic waders, there is a long history of inland occurrences, and this is a species which could be encountered almost anywhere. Spotted Sandpiper also has the distinction of being the only American wader to have nested in Britain. Remarkably, a pair laid four eggs on Skye, Highland, in 1975, but sadly, the attempt was unsuccessful.

In size, structure and habits this is a near-exact replica of Common Sandpiper, although its tail is distinctly shorter, projecting only slightly beyond the wing-tips.

The basic plumage tones are the same as well, although summer adults acquire the highly distinctive thrush-like scatter of dark spots across the underparts from which the species gets its name.

Juveniles and winter adults closely resemble Common Sandpiper. However, juveniles have stronger barring across the wing coverts and the fringes to the tertials are plainer, with just a dark subterminal mark and a pale tip. Sometimes, the face pattern can be a little stronger than Common Sandpiper.

In flight, it appears very like Common Sandpiper but the wing-bar is shorter and narrower across the secondaries and does not reach the body. The bill is often prominently pale at the base. The legs are typically yellowish, hence brighter than those of Common Sandpiper. The call is a disyllabic peet-weet, less shrill than that of Common Sandpiper.

This species breeds across northern Asia, from European Russia in the west to the Russian Far East. It is also a migrant, wintering widely in southern Africa and Asia. It is a very rare bird in Britain, with only 85 records in total. Most occur in spring, but it can arrive in summer and autumn too, and has also wintered.

The basic size, structure and habits resemble Common Sandpiper, but it has a rather steep forehead and – its most distinctive feature – a clearly upturned bill. Its feeding action is quite striking too, with frequent short runs and much sweeping of the bill through the water in the manner of an Avocet. The bill is dark with a pale area at the base and the legs a rather striking yellow.

The overall plumage is plain grey above and white below, with a well-marked supercilium and grey breast-side patches. The sexes are indistinguishable, but summer-plumaged adults develop distinctive dark 'braces' formed by blackish centres to the scapulars. These are not so well marked on juveniles or winter adults.

In flight there is a broad whitish trailing edge to the wing (similar to but more diffuse than that on a Common Redshank) combined with a grey rump and tail. The call is a rapid fluty wit wit wit wit. 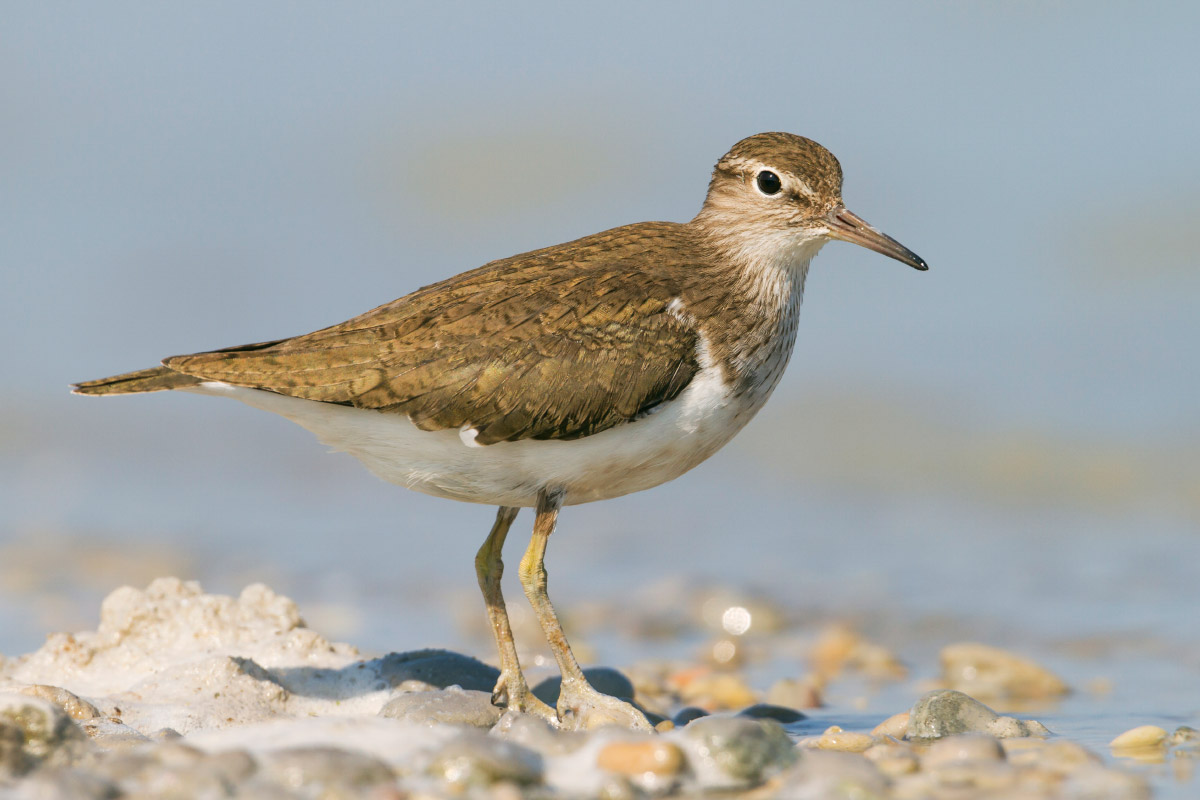 Adult summer Common Sandpiper (Austria, 30 May 2012). The distinctive structure of Common Sandpiper is shown well here. Note the long, oval body, small head, short legs and, perhaps most striking of all, the long tail which projects well beyond the tips of the primaries. The overall impression at range is of a brown-and-white bird with prominent breast-side patches and a white 'V' between these and the 'shoulder', but a close view like this reveals a surprisingly intricate and attractive pattern of dark marks in the upperparts feathers (Ralph Martin / www.agami.nl). 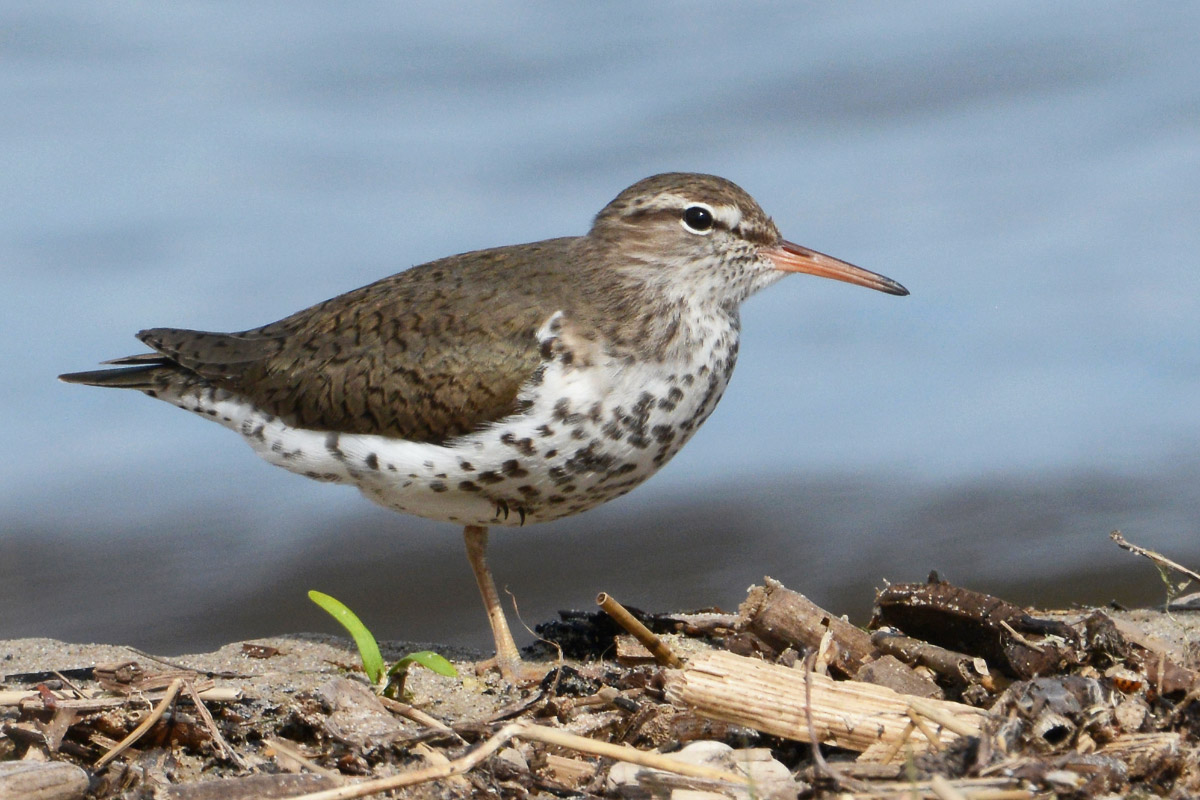 Adult summer Spotted Sandpiper (Michigan, United States, 18 May 2015). The structure of this bird closely resembles that of Common Sandpiper, but note the much shorter projection of the tail beyond the wing-tips. The upperparts resemble those of Common Sandpiper, but the underparts are eye catching indeed: covered in blackish thrush-like spots. Birds like this are pretty unmistakable! However, note also the slightly stronger face pattern and more prominent pale in the bill base (Ray Tipper). 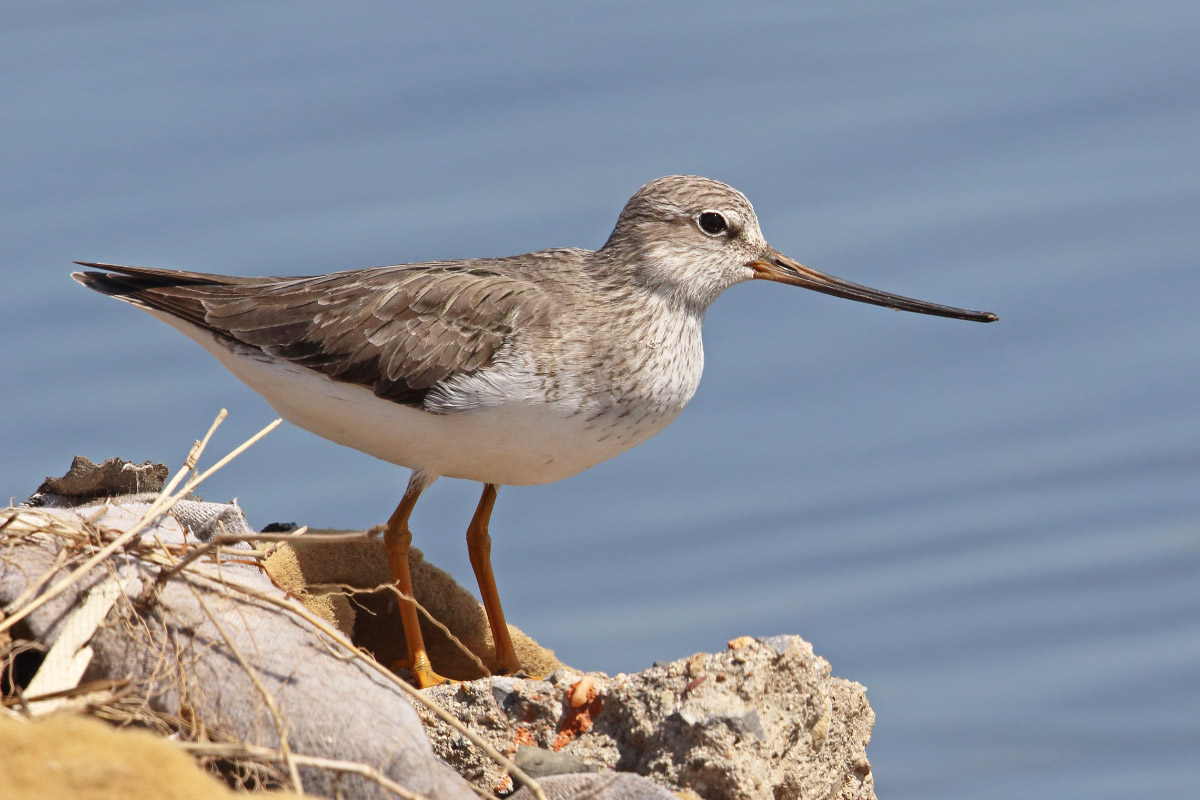 Adult summer Terek Sandpiper (Beidaihe, China, 6 May 2016). At first glance this Terek Sandpiper resembles a Common Sandpiper, but the pale grey upperparts, bright yellow legs and, most obviously, the long and upturned, two-toned bill should all catch the eye, as should the rather abrupt forehead profile and high, rounded crown. Further features include the lack of a projecting tail and, just visible here, some dark markings in the scapulars hinting at the dark scapular 'braces' which are more apparent in some individuals (Neil Bowman). 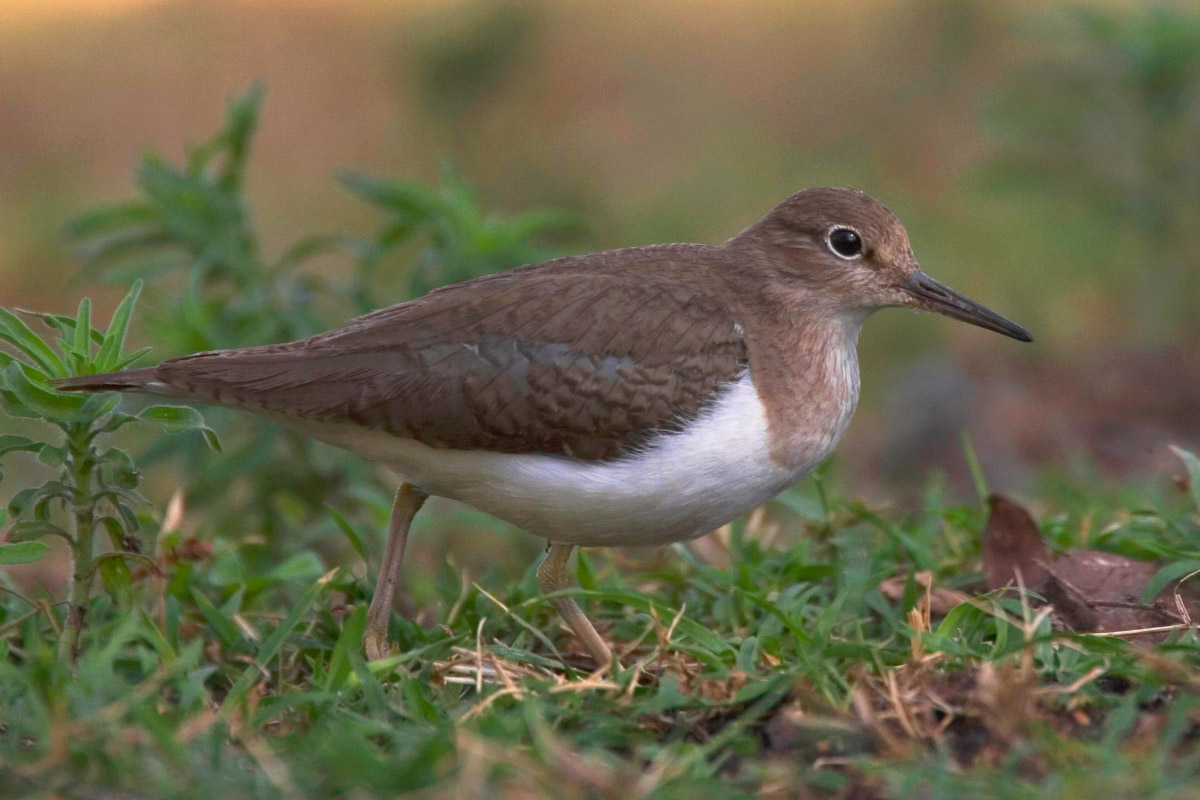 Winter Common Sandpiper (Kenya, 1 January 2006). The distinctive structure – note the long tail – and typical low, crouching posture readily identify this bird as a Common Sandpiper. Its appearance in winter is very similar to that in summer, although the dark markings in the upperparts are perhaps a little more subdued. Note also the rather dull-looking legs, almost wholly dark bill and bland, diffuse face pattern (Harvey van Diek / www.agami.nl). 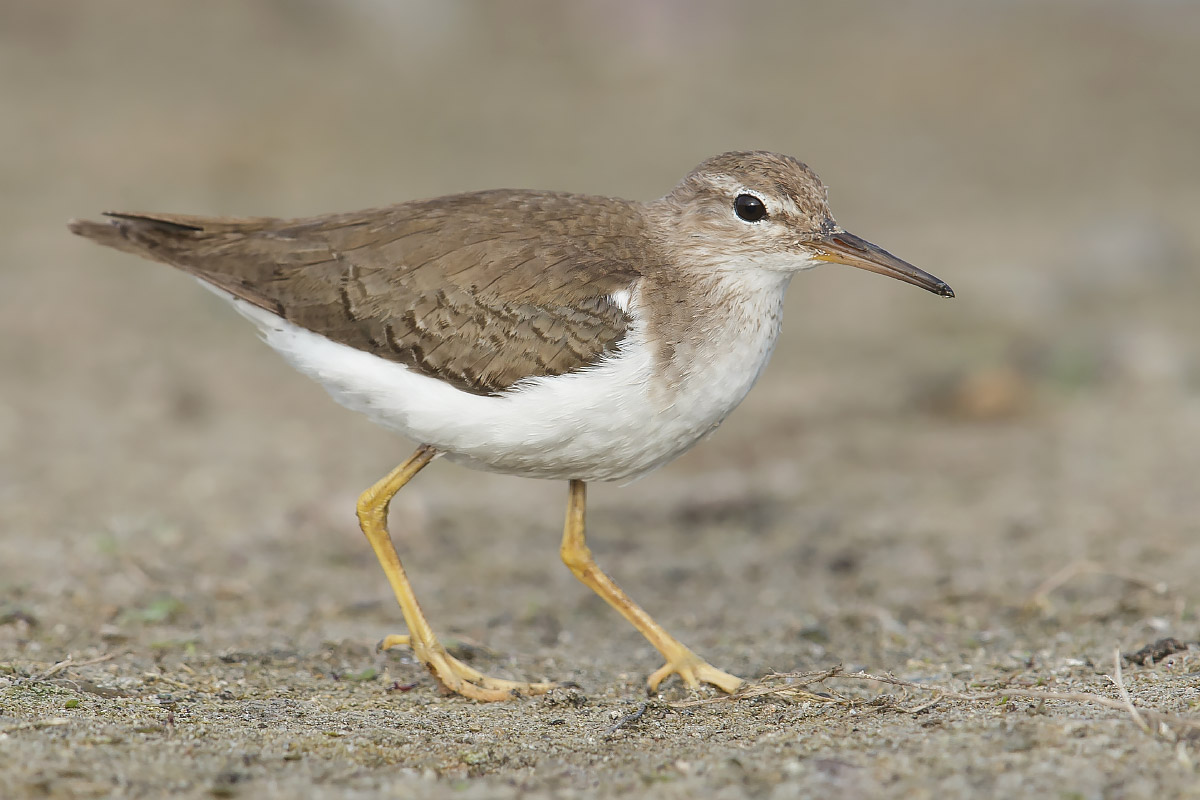 Winter Spotted Sandpiper (California, United States, 26 February 2015). This winter-plumaged Spotted Sandpiper looks similar to the Common Sandpiper in the previous image, but the shorter tail is particularly apparent here. Other useful features include the rather bright yellow legs and a slightly stronger face pattern with a well-marked whitish supercilium (Brian E Small / www.agami.nl). 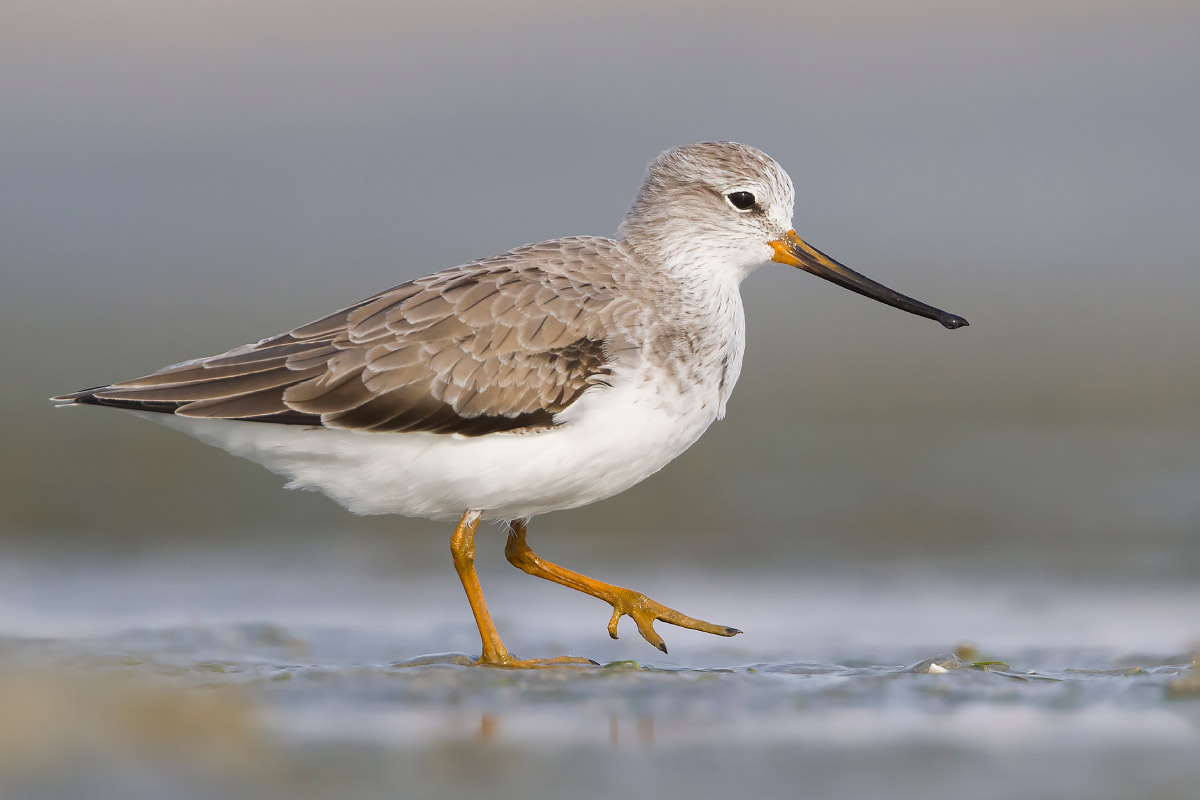 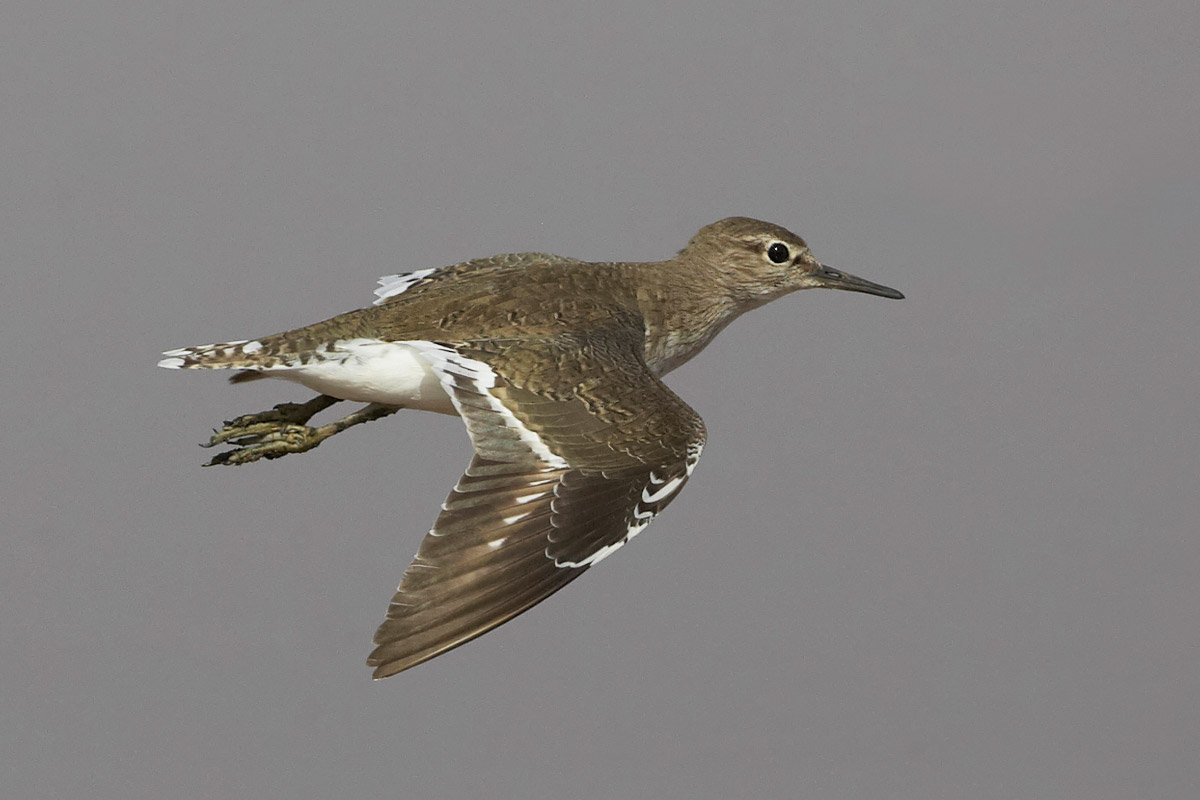 Adult Common Sandpiper (Sohar, Sultanate of Oman, March 2006). This flying Common Sandpiper shows the typical long-tailed and bowed-winged appearance, although the characteristic 'flicking' flight cannot be captured in a single image. The rump and tail are concolorous with the upperparts, with just some brown and white barring visible in the tail sides, but the most obvious feature is the prominent narrow white wing-bar which reaches the body. Also visible are the typically rather dark bill and legs (Markus Varesvuo / www.birdphoto.fi). 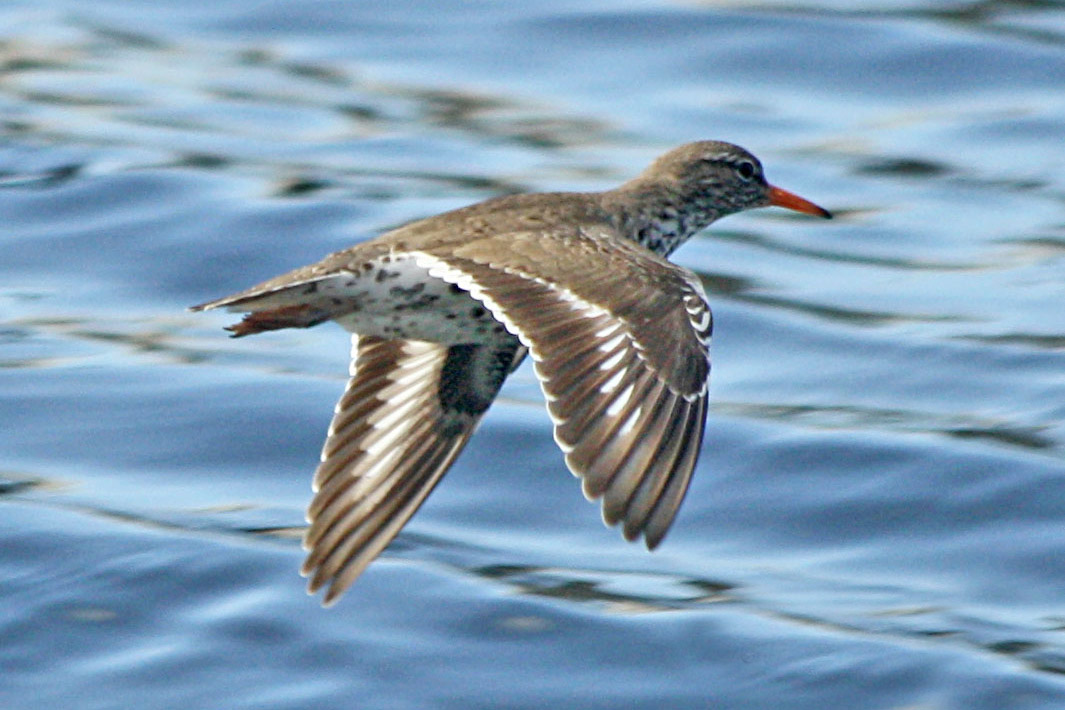 Adult Spotted Sandpiper (Newfoundland, Canada, 17 May 2010). This Spotted Sandpiper shows the same flight profile as its Palearctic cousin, albeit with a shorter tail. The prominent underparts spots readily identify this bird, but note also that the white wing-bar does not reach the body. The bill and legs are typically bright (Lisa de Leon). 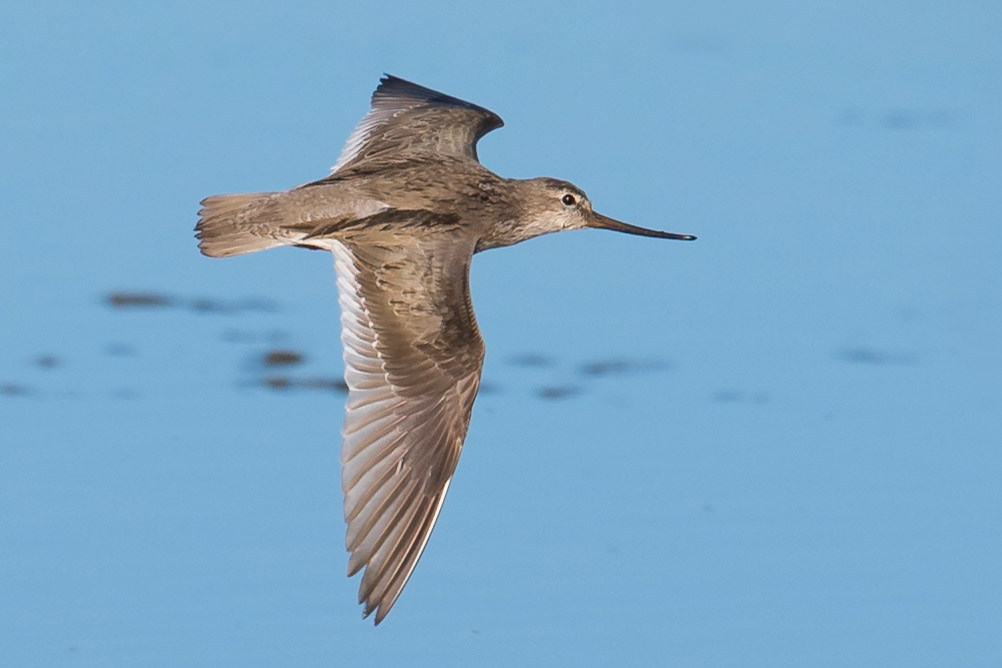 Adult Terek Sandpiper (Oulu, Finland, 14 June 2018). Flying Terek Sandpipers have a rather unusual uniform and grey appearance. The rump and tail are the same pale grey as the rest of the upperparts and the upperwing is relatively plain too. There is no wing-bar, but there is instead a prominent triangular greyish-white trailing edge, resembling that of a Common Redshank, although much more diffuse and less contrasting (Markku Rantala / www.agami.nl). 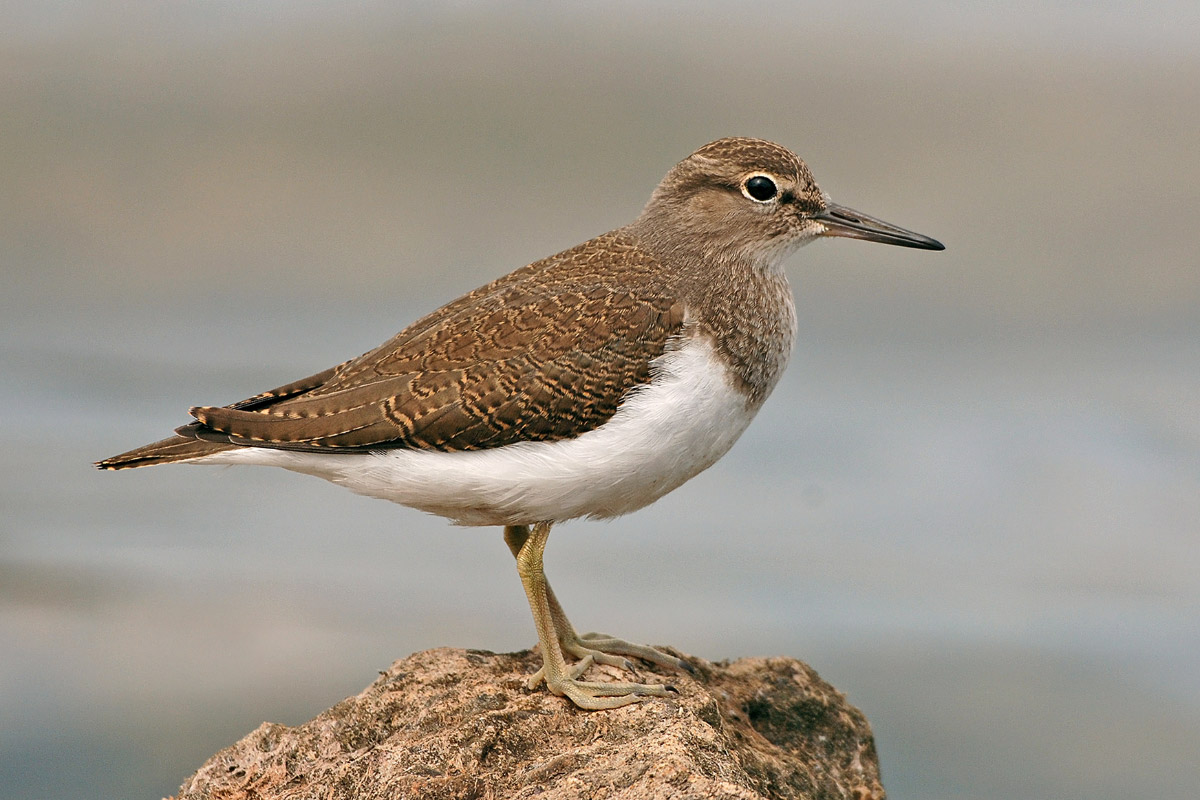 Juvenile Common Sandpiper (Seaforth, Lancashire, 8 August 2006). This image shows the typical Common Sandpiper structure well. Its basically brown-and-white plumage closely resembles that of summer- and winter-plumaged adults. However, closer examination reveals a neat and regular pattern of dark brown and pale cream subterminal barring with a characteristic 'dogtooth' pattern along the outer edges of the tertials. This patterning identifies the bird as a fresh juvenile (Steve Young). 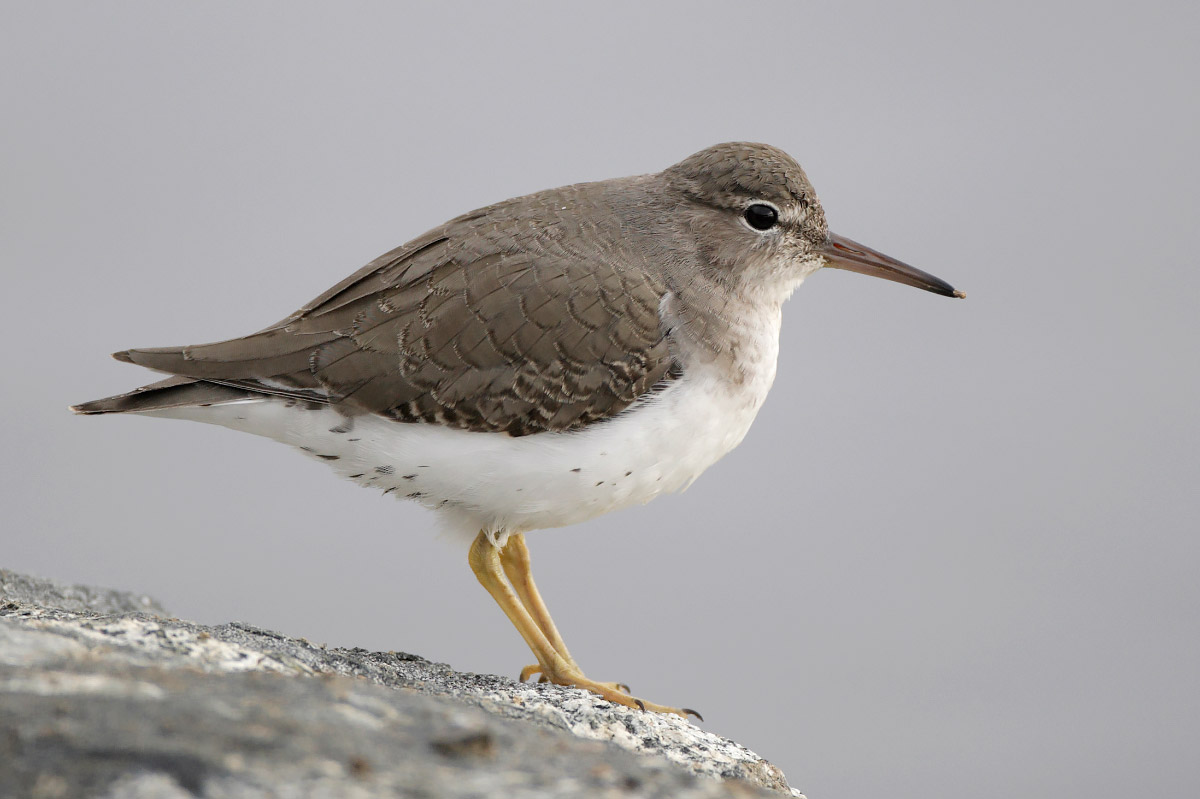 Juvenile Spotted Sandpiper (North America, 20 November 2008). This bird resembles a Common Sandpiper, but the pattern of subterminal barring in the upperparts is most striking on the wing coverts which form a noticeably more barred patch. Note also that the outer edges of the tertials are unmarked, lacking the 'dogtooth' patterning of Common Sandpiper. Further features include brighter yellow legs and a stronger face pattern (Mike Danzenbaker / www.agami.nl). 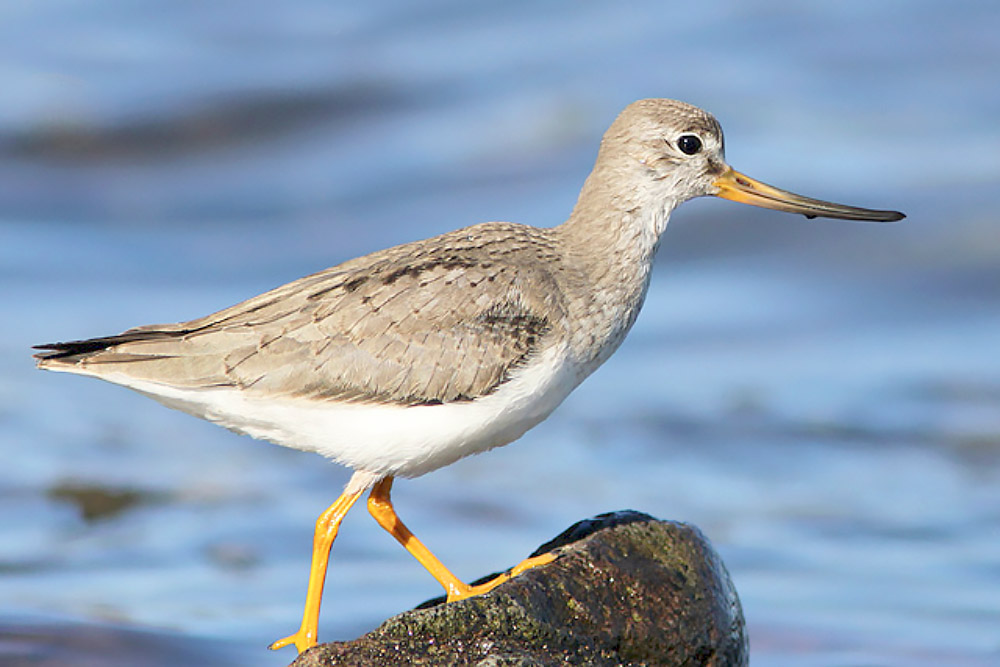