The seemingly inexorable spread of Common Buzzard across Britain is a conservation success story; it is now our most regular diurnal raptor. However, despite increased familiarity with this species, confusion with the much scarcer European Honey Buzzard remains a real risk. Although not closely related, the latter can appear very similar to Common Buzzard, and with May being peak migration for European Honey Buzzard now is the time to improve your identification skills with comprehensive advice from Andy Stoddart. 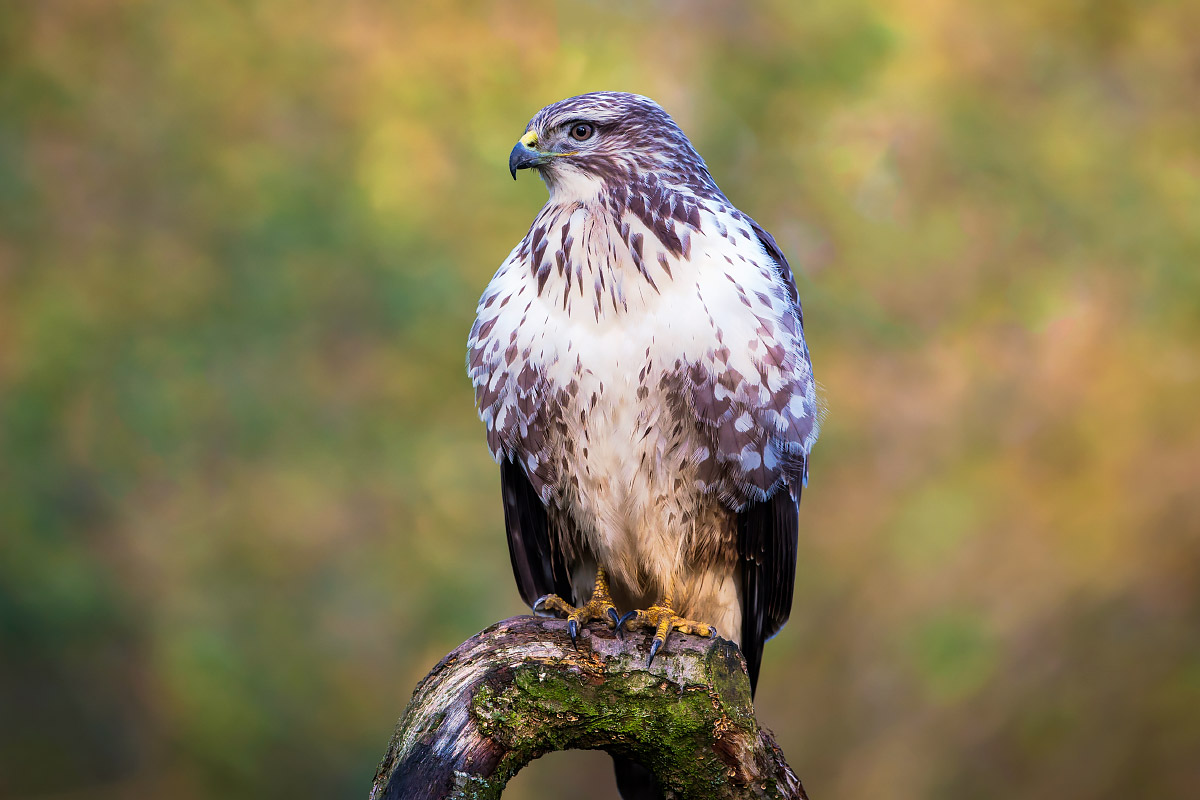 Immature Common Buzzard (Marton, Cheshire, 21 November 2013). A perched Common Buzzard is now a frequent sight across most of Britain. This is a rather pale individual with extensive white in the underparts, but the typical pattern of dark markings in the malars, breast-sides and flanks is still evident. The pale iris indicates a young bird (Conor Molloy).

Common Buzzard breeds throughout the Palearctic and occurs in a number of subspecies. Europe hosts the largely resident or only partially migratory nominate form, while Finland and Russia are home to the subspecies vulpinus, known as 'Steppe Buzzard'. This is a long-distance migrant wintering in southern Africa. It is not on the British list and would be very difficult to prove here. Steppe Buzzard is notoriously variable, occurring in a bewildering variety of colour morphs ranging from almost black to a bright foxy red.

In Britain Common Buzzard is resident and now very numerous, and one of the major ornithological success stories of the last 20 years has been the eastward march of this species. Long confined to traditional strongholds in the upland west and north, it has spread relentlessly east and is now an everyday sight throughout most of Britain. It is now our commonest diurnal raptor and in most places is the default large bird of prey, regularly seen perched along roadsides.

Common Buzzard has a very characteristic silhouette, appearing rather compact, broad, but short winged, with a short, broad head and a noticeably short, broad, square-cornered tail which is shorter than the wing-breadth. It has a distinctive rapid, stiff, rather laboured wing action and soars on characteristically raised wings with a fan-shaped tail, but can adopt a flatter-winged profile when gliding. Displaying birds also show a very striking fluid, slow-motion wing action and perform steep dives and tumbles. It can hover quite well too, sometimes for lengthy periods. Birds over breeding habitat in early spring are typically seen in pairs or small groups.

Common Buzzards come in a great variety of plumages, but most are mid-brown, with an often obvious dark upper breast 'shield' above a paler semicircular band. In flight, they show restricted dark primary tips, dark, often comma-shaped 'wrist patches', extensive whitish under-primary patches and finely barred tails. Adults have a broad dark trailing edge to the wings (more diffuse on juveniles) and a broad dark subterminal band to the tail.

The darkest birds can suggest Marsh Harrier, with the palest suggesting Rough-legged Buzzard. These not infrequent pale birds are very striking, almost white on the head and underbody, with a white underwing, reduced dark 'wrist patches' and white in the scapulars, wing coverts, tail-base, uppertail coverts and rump.

Seen close, all Common Buzzards have a yellow cere, but the eye colour varies – pale with a dark pupil in juveniles and wholly dark in adults. The species is very vocal, giving a loud mewing sound which can be heard throughout the year.

This species is monotypic and breeds throughout most of Europe and east into Russia as far as western Siberia. It is a long-distance migrant, wintering widely in sub-Saharan Africa, and on its journeys to and from its wintering grounds it can be seen in enormous numbers at well-known raptor 'bottlenecks'. To the east, across most of Asia, it is replaced by its close relative, Crested Honey Buzzard – a rare vagrant to the Middle East.

European Honey Buzzard is exclusively a summer visitor to Britain, but is very uncommon and never seen in numbers. It is very thinly distributed and can be very elusive, but is best seen when performing its striking 'wing-clapping' display. Most encounters in Britain are with lone migrants in late spring and again in autumn. These mainly involve British breeders, but very occasionally easterly winds in the North Sea in autumn drift larger numbers of southbound continental migrants into eastern England.

Although not at all closely related to Common Buzzard, the basic size and silhouette are similar and the confusion risk is real. It is, however, rather different in structure, with a narrower body, longer wings, characteristically 'pinched in' wing bases, a longer, broader tail with rounded corners which is at least as long as the wing-breadth, and a narrower, more protruding head, often likened to that of a Common Cuckoo. Autumn juveniles are structurally slightly less distinct, a bit shorter winged and therefore more likely to be mistaken for Common Buzzard.

The flight is much 'looser' than that of Common Buzzard, with fluid, flexible wing-beats. European Honey Buzzard soars on flat wings and glides with the wings slightly drooped.

The plumages of European Honey Buzzard are many and complex. The basic pattern resembles Common Buzzard, but both adults and juveniles come in a wide variety of plumage types ranging from very dark to almost white. Most juveniles are of the dark type.

In flight from below, adults of both sexes show oval 'wrist patches' on the underwing, broad dark trailing edges to the wings and plain or barred under-bodies. Males show a soft grey head, restricted dark in the primary tips, a broad pale band through the undersides of the flight feathers and a broad dark terminal band to the tail with a long gap before two narrower bands near the base. Barring can also be visible in the upperwing. Adult females are browner headed, have more dark in the primaries, more dusky secondaries and are more regularly barred in the wings and tail.

Juveniles have solidly dark outer primaries, oval 'wrist patches', dark-looking well-barred secondaries contrasting with paler under-primaries, a pale area in the greater underwing coverts and regularly spaced barring in the tail. Pale birds typically show coarse dark breast streaking and a dark eye-patch, while dark birds show no pale in the breast.
Seen close, adults have a yellow eye combined with a dark cere and bill, juveniles a dark eye with a yellow cere and a yellow base to the bill. Birds are silent except in the breeding season, when they may give a fluty peee-lu. 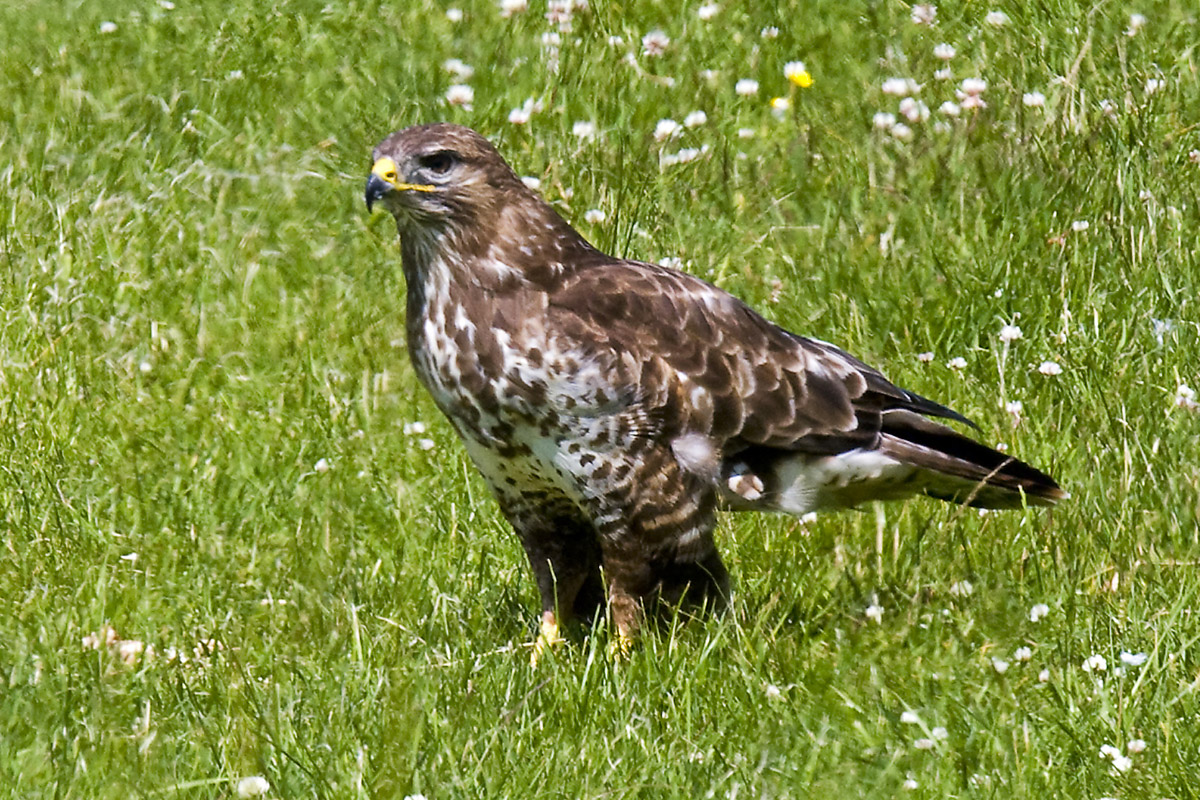 Adult Common Buzzard (Gigrin Farm, Rhayader, Powys). This is, again, a typical perched view of a Common Buzzard. The plumage is of the normal 'medium' type, being a rich warm brown with the malar, breast-side and flank markings clearly evident. Common Buzzard plumages are highly variable, however, and this bird lacks an obvious dark upper breast 'shield' and paler breast band. The dark eye here indicates that this individual is an adult (Alan Tate). 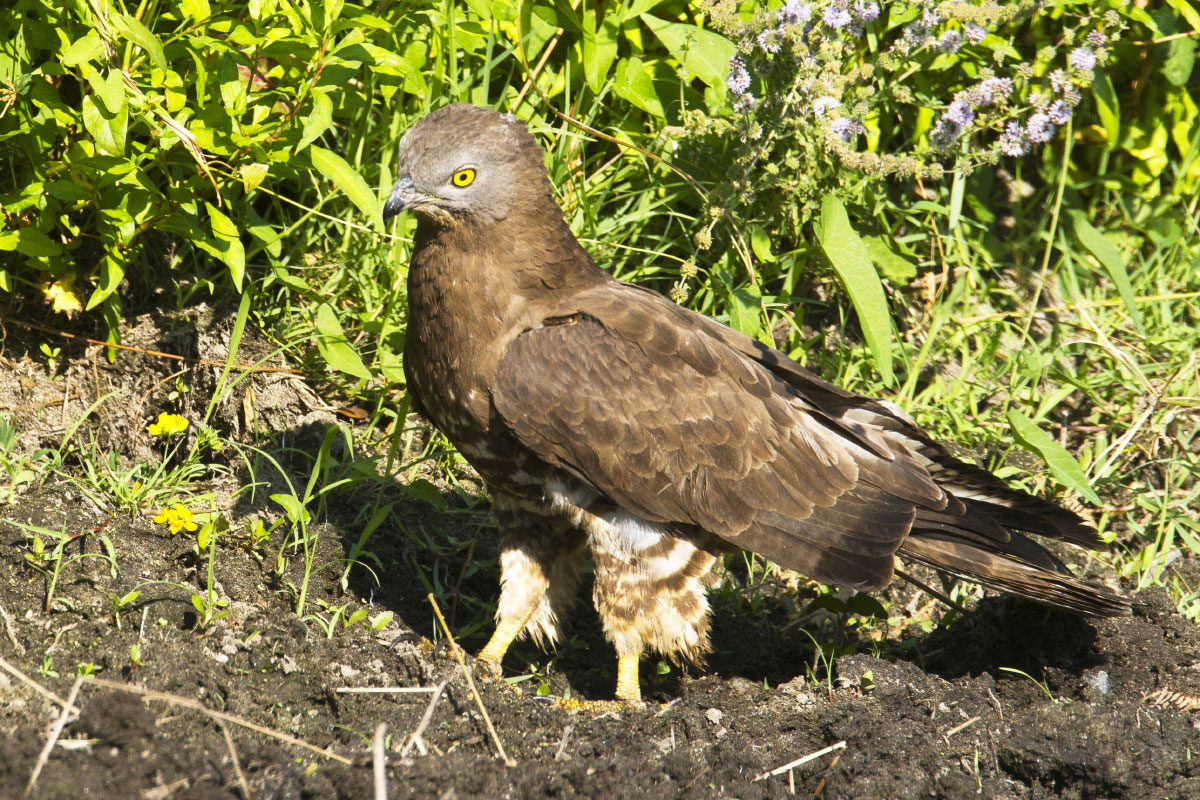 Adult European Honey Buzzard (Castilla y León, Spain, 29 July 2012). It would be highly unusual indeed to come across a European Honey Buzzard on the ground in Britain, and views like this might only be achieved elsewhere in the species' range. If you were lucky enough to find a perched bird, look for the noticeably small, slender bill – a clue to its very different lifestyle. Note here the adult combination of a yellow eye and dark cere. This is a rather dark individual, strongly washed brown over most of its plumage (Oscar Diez / BIA).

Adult Common Buzzard (Washington, West Sussex, 7 June 2013). This rather typical 'medium-toned' adult is a bright warm brown with dark primary tips, broad dark trailing edges to the wings and comma-shaped 'wrist patches' combined with pale under-primaries and a finely barred tail with a darker band near the tip. Note also the dark upper breast 'shield' above a paler band. The species' structure is shown well here – broad but relatively short wings, a broad, short head and a short-looking tail which is slightly shorter than the wing-breadth (Lisa Geoghegan). 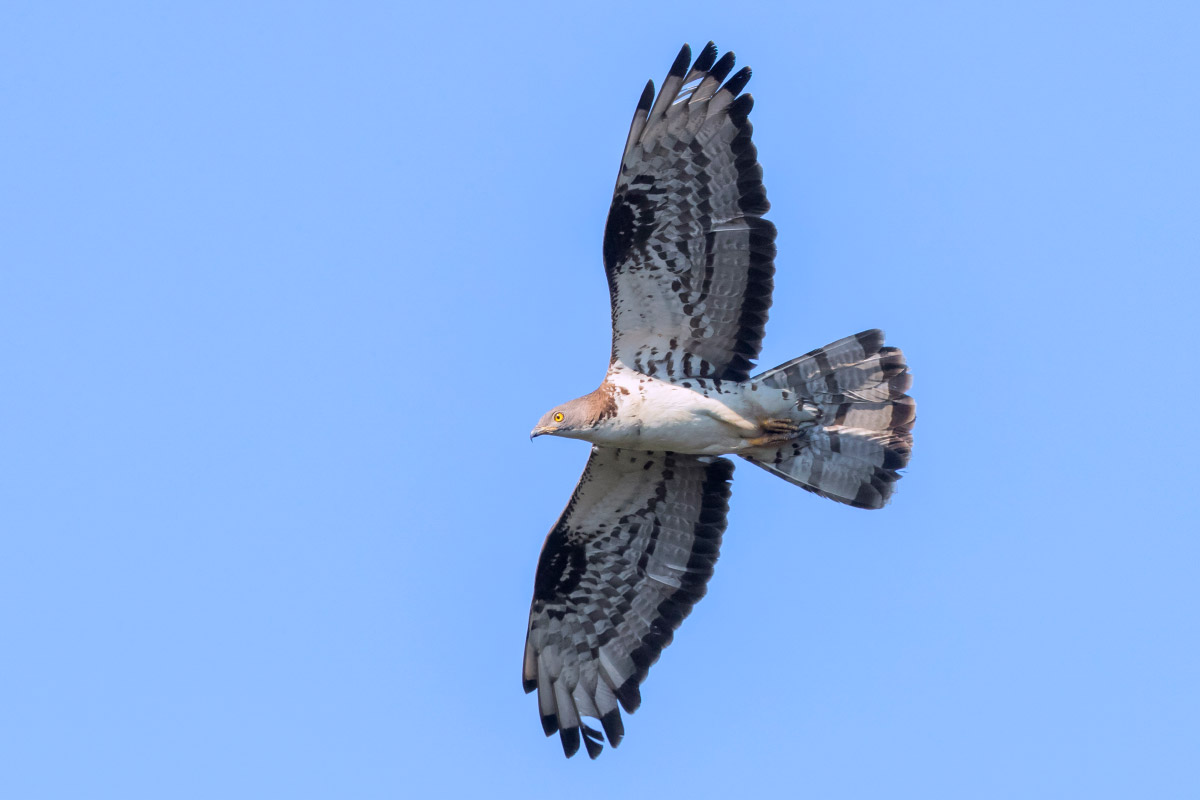 Adult European Honey Buzzard (Campania, Italy, 8 July 2018). This very pale adult male European Honey Buzzard is structurally very different from Common Buzzard. Note the slender body, narrow, protruding head and long, very 'full-looking' tail which is at least as long as the wing-breadth. The plumage is even more striking, with restricted dark in the primary tips, oval 'wrist patches', a broad dark trailing edge to the wings, a broad grey band through the undersides of the flight feathers, a soft grey head, plain white underbody and unevenly spaced bars in the tail (Saverio Gatto / www.agami.nl). 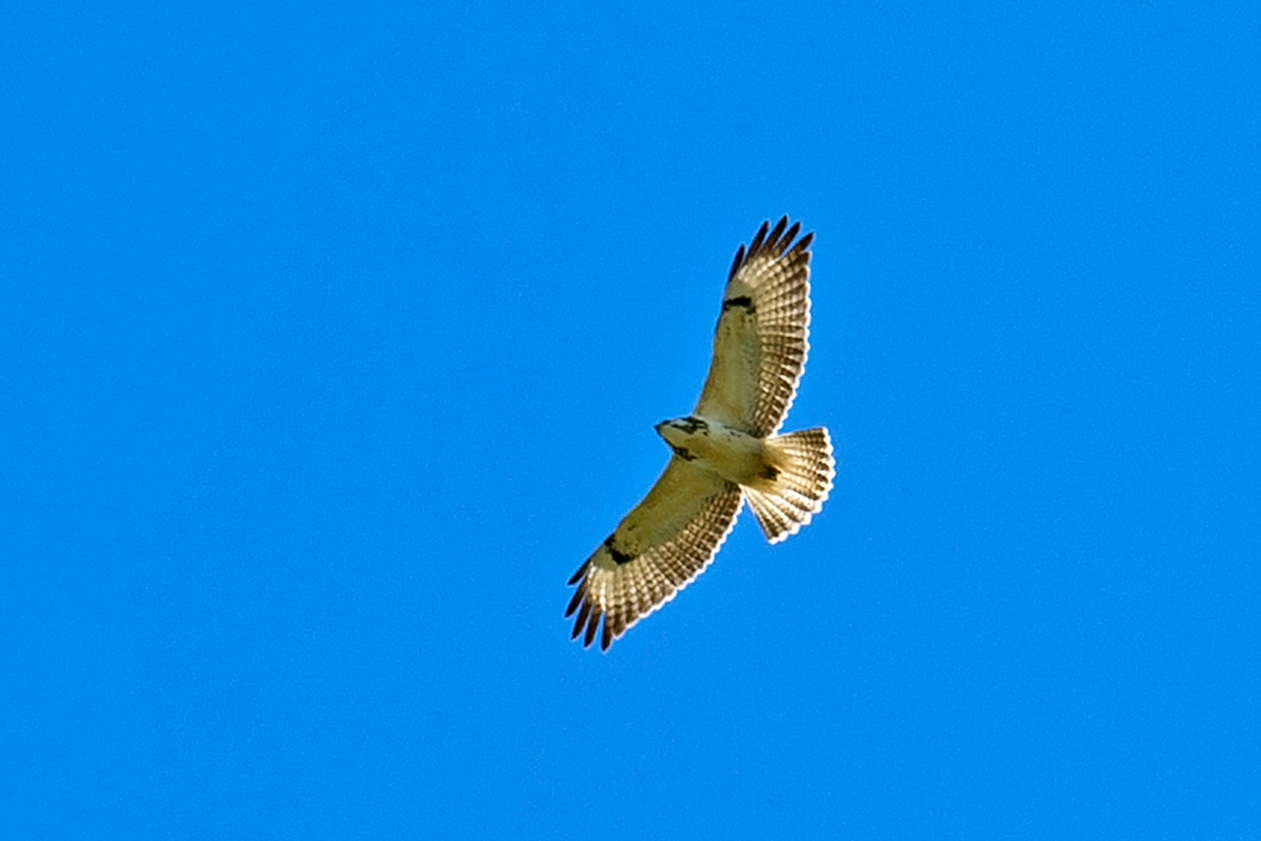 Juvenile Common Buzzard (Falsterbo, Sweden, 5 September 2010). The very broad wings, short, blunt head and short, square-cornered tail identify this straightaway as a Common Buzzard. It looks strikingly white with minimal dark in the underparts and underwings and reduced dark comma-shaped 'wrist patches', but such birds at the pale end of the range of variation are not infrequent, especially in Continental Europe. The rather diffuse trailing edges to the wings and the lack of a broad dark subterminal band to the tail age it as a juvenile (Steve Young / www.birdsonfilm.com). 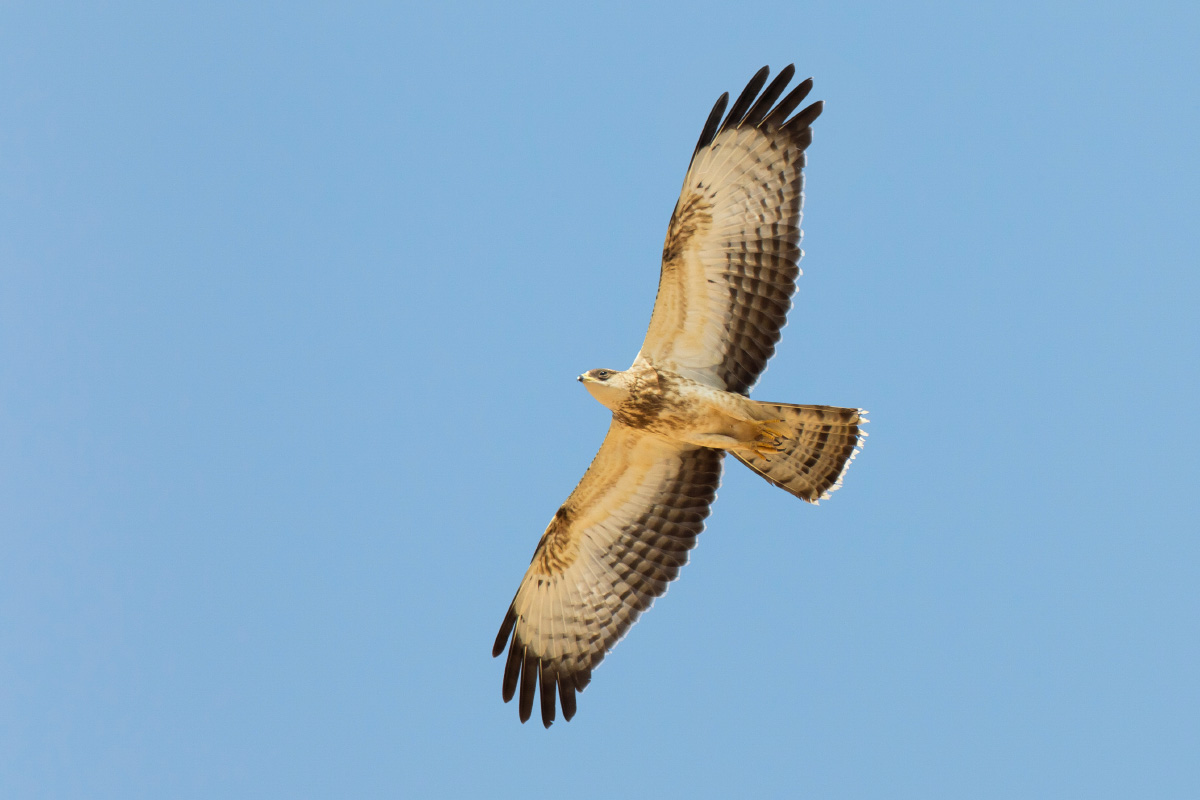 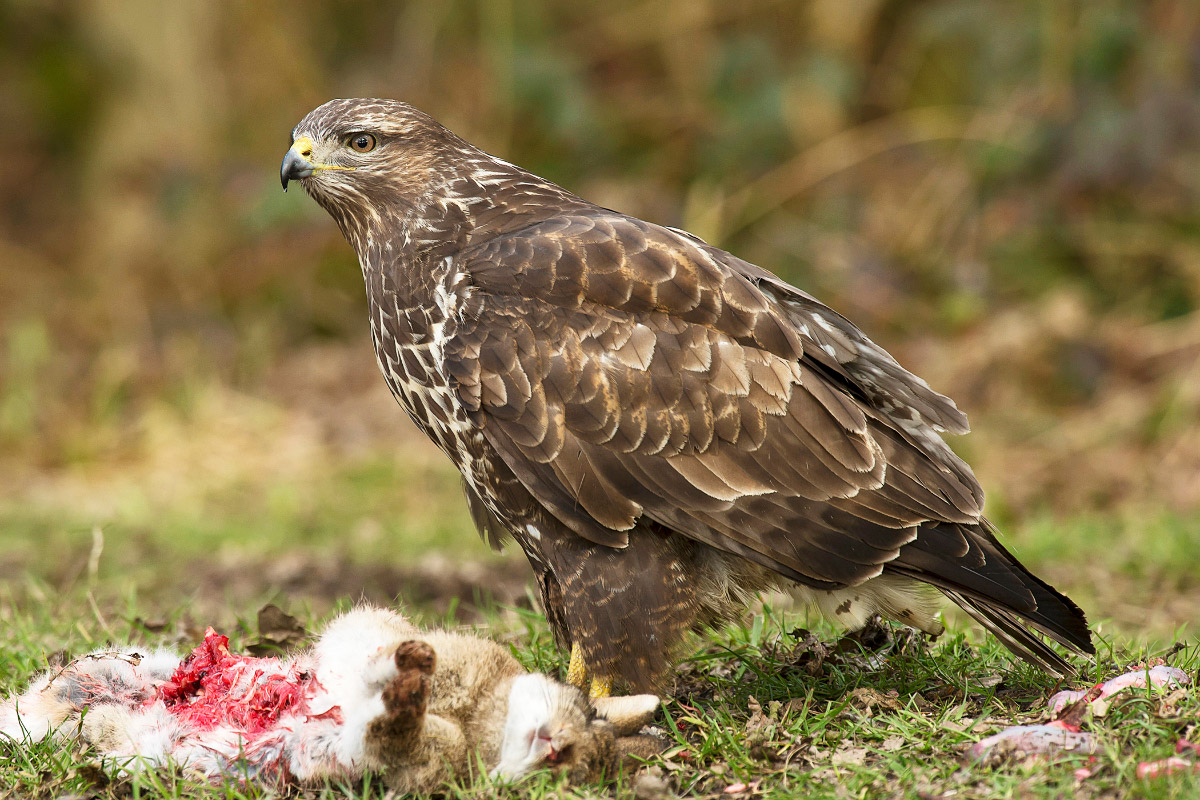 Juvenile Common Buzzard (Sandbach, Cheshire, 26 March 2013). This medium-dark Common Buzzard is seen, typically, on what appears to be a dead rabbit. The compact structure and broad head are evident here, and note that this bird, being a little darker, is showing a dark upper breast 'shield' with a paler semicircular area below. The pale iris indicates a young bird (Steve Young / www.birdsonfilm.com). 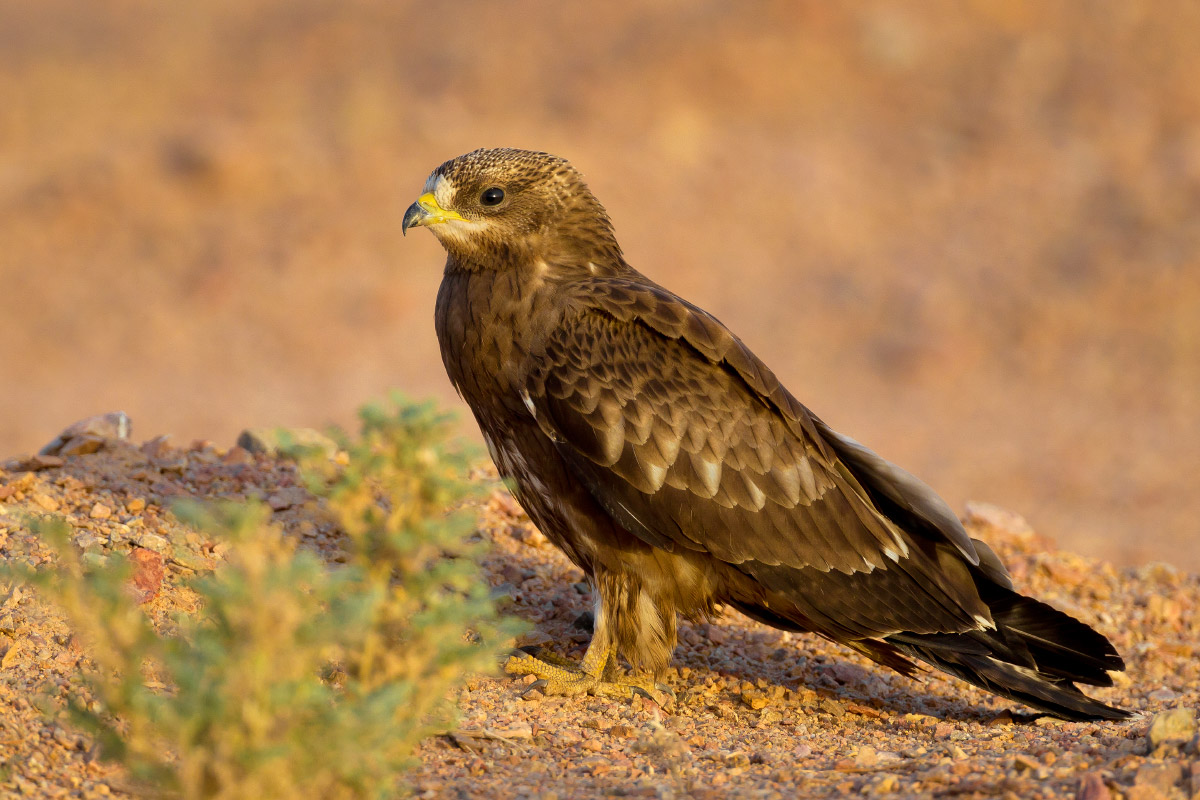 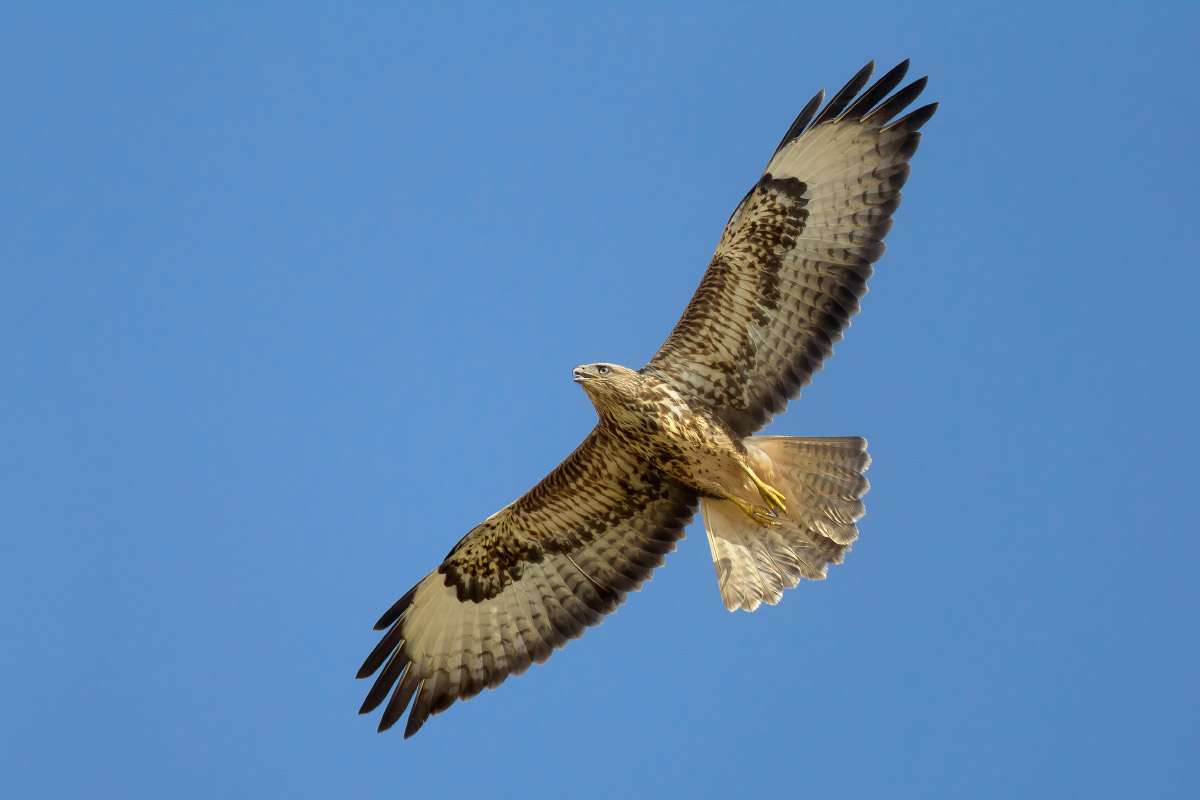 Juvenile Steppe Buzzard (Sharm El Sheikh, Egypt, 19 October 2010). 'Steppe Buzzards' come in a bewildering variety of plumage types, some very dark, some very rufous, but this juvenile (note the pale iris, diffuse trailing edges to the wings and lack of a broad dark subterminal band on the tail) appears very like a nominate Common Buzzard. The underparts markings are a little 'drop shaped' and there is no pale band across the breast, but otherwise this bird would attract little attention in Britain. However, as the photograph was taken within the range of 'Steppe Buzzard', we can be sure that it is of this subspecies (Daniele Occhiato / www.agami.nl). 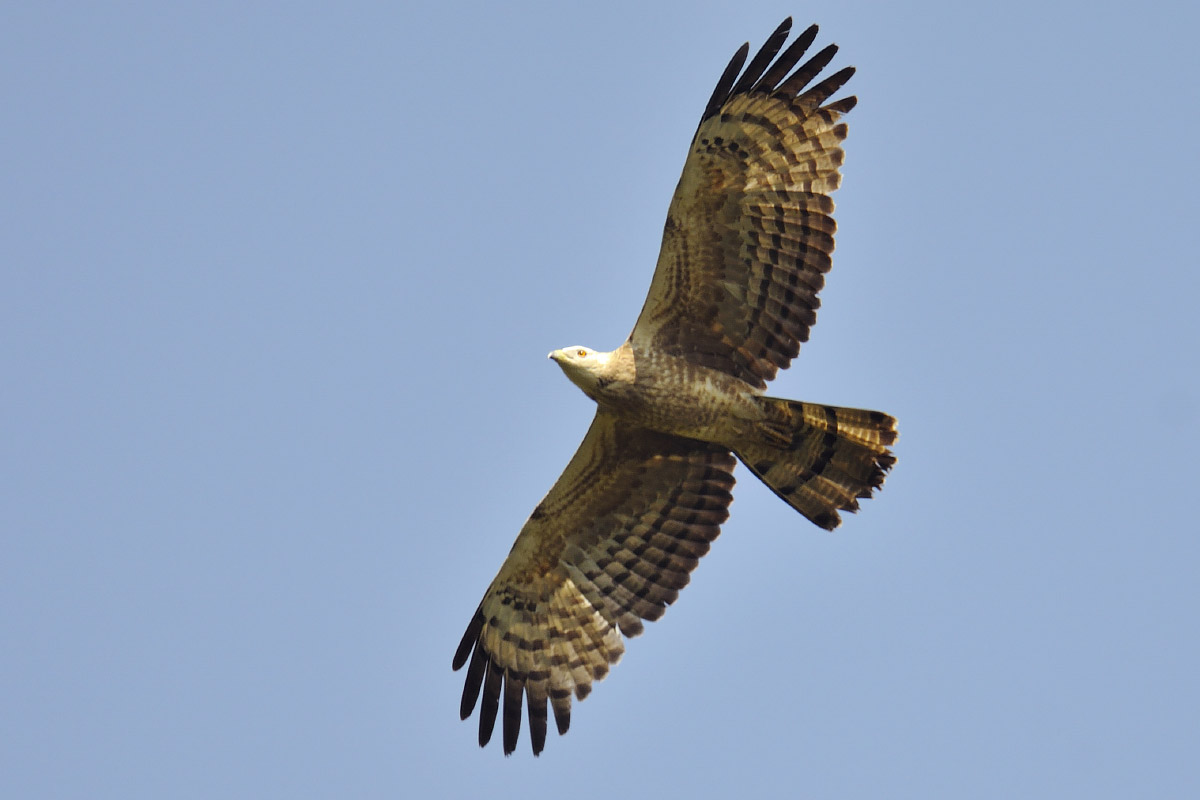 Adult Crested Honey Buzzard (Kerala, India, 10 March 2010). This bird looks like a European Honey Buzzard in both its structure and plumage, although the wings are perhaps a little broader, the secondaries bulge a little more and there are six (not five) 'fingers' making up the wing-tip, all these features contributing to a subtly more powerful, eagle-like impression. The most obvious feature, however, is the lack of any dark 'wrist patch' on the underwing. Adding to potential confusion, hybrids between this species and European Honey Buzzard have also been recorded in the Western Palearctic (David Williams / BIA).