Waxwings are compulsive viewing for birdwatchers. Several blank winters in the UK can come to a dramatic end when a berry shortage forces them to move in search of food and brings a sudden arrival in the UK from their remote breeding grounds across the huge pine forests of Scandinavia. Their distinctive crests, subtle plumage colour with striking features, trilling call and confiding nature give them a unique appeal. What other attractive species can you bump into while Christmas shopping, a hungry flock surging onto an ornamental rowan oblivious to the hustle and bustle of traffic and shoppers passing by? 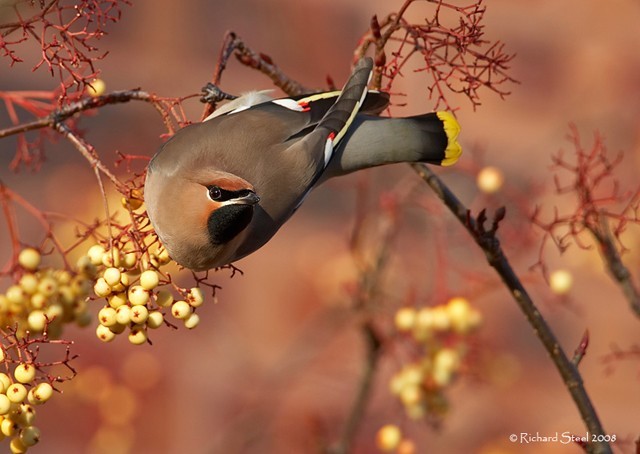 Autumn 2008 has seen another Waxwing invasion into the UK: not quite as large and spectacular as 2004 but in considerable numbers all the same. In Aberdeen, the first bird was reported on the last day of October; numbers quickly peaked at probably around 1,500 in mid-November (with one flock of 7–800 birds) and by the end of the month there were only a few small scattered flocks left.

Every invasion has its own features and traits and this one is no different. One significant difference this year compared to the berry-laden trees of 2004 has been the generally poor berry crop, particularly rowans and whitebeam, the Waxwing's favourite food. What few rowans there were were quickly stripped but, unlike in 2004, most of the trees guarded by Mistle Thrushes survived the brief attentions of the marauding flocks, which seemed more intent on a quick feed before moving on. We have never ever seen an invasion pass through the northeast of Scotland so quickly. It all kicked off and was over within a single month, due mainly to the poor berry crop already mentioned.

Grampian Ringing Group have been colour-ringing Waxwings for 20 years. We have most of our Waxwing sites mapped out so, despite the rapid passage of birds this year, with a few flexi-lunches (now known as Waxie lunches!) we were able to individually colour-ring 137 in November before they all disappeared. Over 100 were also ringed in Orkney, 40 with a single colour-ring. 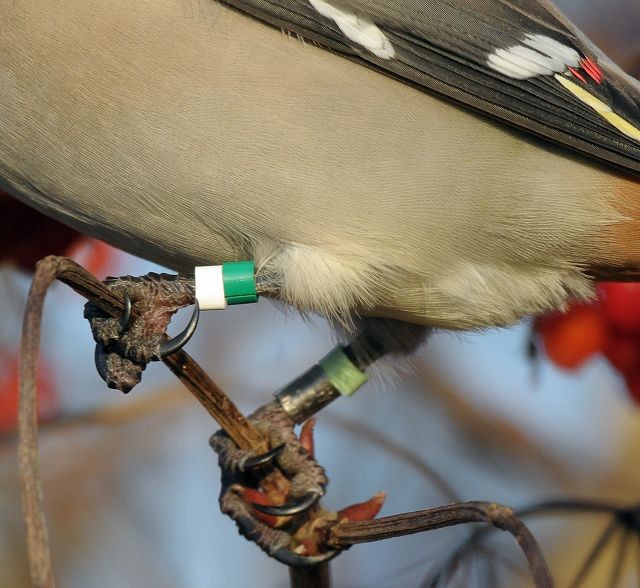 We wondered how far and quickly the Waxwings were moving on and hoped the colour-ringing might help us shed some light on this. We certainly have not been disappointed.

Unfortunately our first two recoveries were from dead birds, one handed into a vet 50km south of Aberdeen three days after ringing and the other striking a window in the Scottish Borders eight days after ringing. Waxwings don't have windows or Perspex bus shelters back home in the forests so they become a major cause of Waxwing fatalities when birds fly into them in winter. We have put posters up in bus shelters and had people close their blinds beside feeding trees in an effort to prevent such mortality, as it is very unpleasant to witness such deaths, sometimes of several birds together.

It got better after this though. As in 2004–05, many birders and photographers have reported colour-ringed birds and already we are getting a good idea of the speed and direction of the Waxwings' onwards movements. With two or three reports every week, the resighting rate is already down to 1:8.5 birds, an incredible return rate for any passerine. Like the initial speed of the passage through Aberdeen, it appears to be continuing apace with birds as far south as Yorkshire, Lancashire and Suffolk within a few weeks of ringing.

A great big thank you to all observers who have reported their sightings of colour-ringed Waxwings. Many have been accompanied by terrific digital images. Several photographers have only noticed the colour-ringed birds when downloading their pictures onto their computers at night...digital birding is very useful at times! 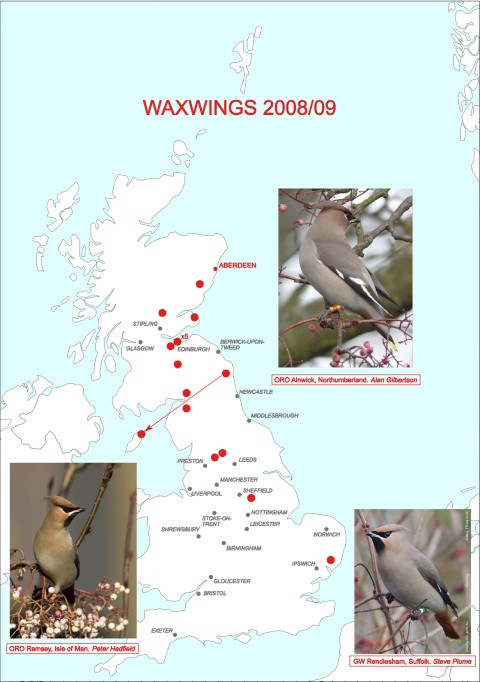 Distribution of Waxwings colour-ringed in Aberdeen in November, and reported elsewhere up until mid-December.

The above map shows the distribution of birds colour-ringed in Aberdeen in November and reported elsewhere up until mid-December. Hopefully there are still more to come.

Please do keep checking all Waxwing flocks you see for colour-rings. Repeat sightings of individuals are particularly interesting, especially from the same area. All contributors will receive a full history of any birds reported and a regular update of the project results.

Raymond recently received The Bernard Tucker Medal 'for outstanding service to the Trust' from the BTO at the recent annual conference. The Medal was first awarded in 1954, in memory of the BTO's first Secretary, Bernard Tucker.  — Ed.
Written by: Raymond Duncan, Grampian Ringing Group
Login to leave a comment
Return to List