Changing of the guard for London's garden birds

New results from the BTO's year-round Garden BirdWatch survey show that the hefty Wood Pigeon is now more common in London gardens than either Robin or Blackbird. Meanwhile the diminutive Goldcrest also now appears more regularly. A new 'taster' version of the survey is helping even more people to get involved. 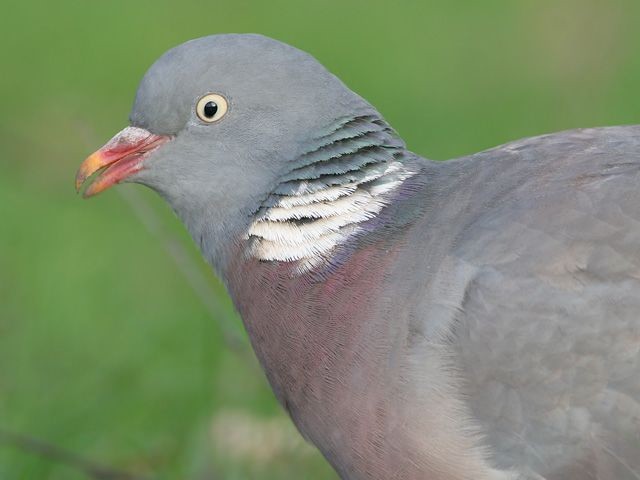 Londoners participating in this the largest year-round survey of garden birds in the world have revealed a dramatic recent influx of Wood Pigeons into the capital: 9 out of 10 gardens in Greater London are now visited by the species, up by almost a third since 1995. Although elegant, with its soft pink and grey plumage and smart white collar, Wood Pigeons are a divisive presence with householders because of their seemingly insatiable appetite. Indeed, a single Wood Pigeon can eat the same quantity of food as seven sparrows. 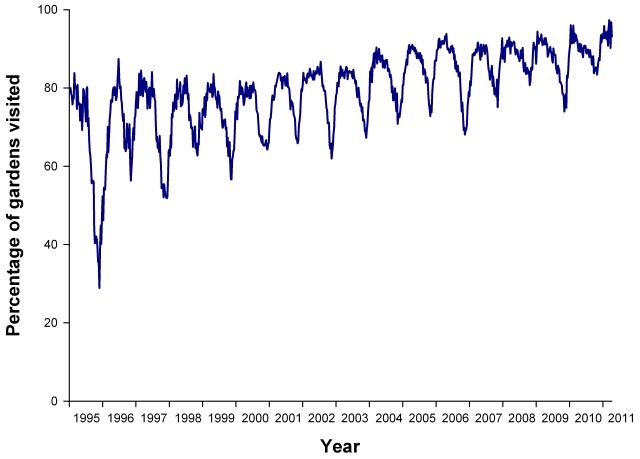 Change in the reporting rate of Wood Pigeon in London gardens (graphic: BTO).

At the opposite end of the spectrum, Goldcrests have been recorded in a third more gardens in 2011 compared with the long-term average (calculated since 1995). The urban landscape of Greater London results in warmer temperatures than are found in the wider countryside, which benefit Goldcrests through winter and into spring. Almost two thirds more Londoners have seen a Goldcrest in their garden during 2011 than the average for the rest of Britain and Ireland.

House Sparrows and Starlings are both flocking species and so, numerically, they remain London's most abundant garden birds. However, the percentage of gardens visited by these iconic birds continues to slide. Since 1995, one in five Londoners has lost their Starlings completely, while, astonishingly, almost half have lost all their House Sparrows.

With so many exciting and important trends emerging, the BTO is encouraging more Londoners to take part in Garden BirdWatch by trying a new three-week taster version of the survey. BTO Garden BirdWatch has run every week since 1995 and has over 700 participants in Greater London alone.

Dr Tim Harrison of BTO Garden BirdWatch commented: "Londoners can be amazed at the birds that they have in their gardens. Despite its urban landscape, Greater London supports a wide variety of garden birds, many of which — including Jay, Great Spotted Woodpecker and Great Tit — are much more common here than people might think."

He added: "These results demonstrate citizen science at its best. Who would have guessed that Wood Pigeons would be spotted more often in local gardens than Blackbirds and Robins? Only the acrobatic Blue Tit is now seen more frequently. Anyone who watches garden birds for at least a few minutes during most weeks can become a BTO Garden BirdWatcher. Through the survey, simple observations make a real scientific contribution."

For a free BTO Garden BirdWatch 'taster' pack, including a copy of the survey's quarterly magazine Bird Table, email gbw@bto.org. 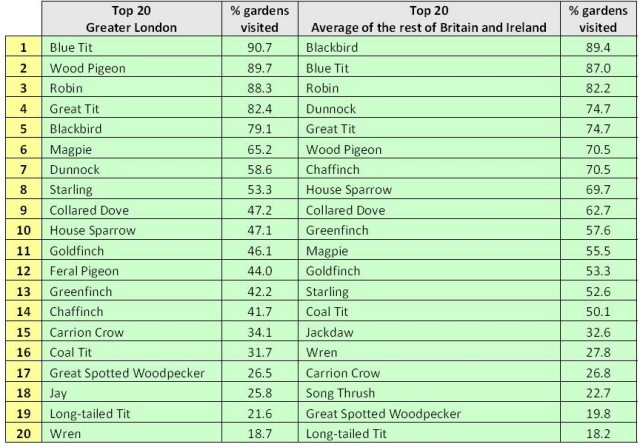 Top 20 bird visitors to London gardens and those across Britain & Ireland (data: BTO).