Catching up with Cuckoos

Since their arrival in the UK we have received regular location updates from both BTO satellite-tagged Cuckoos Chris and Lyster. On arrival in the Norfolk Broads, Lyster has roamed over a large area. Early last week he seemed to settle close to Malthouse Broad, northeast of South Walsham. This week he has moved and is now close to Loddon and Chedgrave, 16km (10 miles) south of his previous location. When we finally tracked him down with the BBC last week, he was very active, flying around and 'cuckooing', presumably in search of a female. As a Broads Cuckoo, we assume that Lyster is a 'Reed Warbler' Cuckoo and that he is looking for females that target Reed Warblers.

Chris is a very different Cuckoo to Lyster. Since arriving back in the Brecks, Chris has spent most of his time focusing on small pockets of woodland near Mildenhall, Suffolk. He was originally tagged on the edge of forest close to Santon Downham, Suffolk, and it seems that he is very much a forest Cuckoo, presumably looking for females that target birds like pipits and Dunnocks. 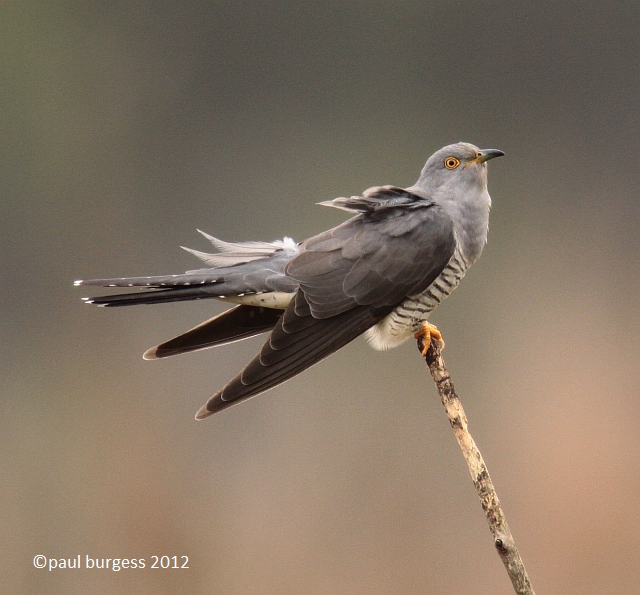 The return of Lyster and Chris received fantastic coverage in the local and national press and on TV and radio. Victoria Gill's excellent feature for BBC News is still available to read online, complete with a short video. Michael McCarthy, the Independent's environmental correspondent, summed up the project brilliantly, and describes how Cuckoos call in the key of D — fascinating!

It was always going to be a long shot, actually filming one of the tagged Cuckoos on his return to England. With a BBC film crew in tow, this is exactly the challenge that Phil Atkinson and Paul Stancliffe faced as they rushed to the Norfolk Broads in the hope of catching a glimpse of Lyster. Even the weather was conspiring against them but, with a little skill and a lot of luck, Lyster was finally spotted. Read Paul's review of how the day unfolded.

We still haven't heard from Kasper but, while we are beginning to fear the worst, we haven't given up all hope. On 6th January, while he was in southern Congo, we lost Kaspar for a month before he popped up again on 7th February in the northwest tip of Congo, close to the border with Cameroon.

Phil Atkinson and Chris Hewson are driving north right now to begin the next phase of the project. They hope to tag a batch of Scottish Cuckoos in the next few days so that we can compare their journeys and wintering grounds with those of the original five English birds. We urgently need new sponsors to help us fund this work on Scottish birds and to enable us to start on some Welsh birds too. If you can help us by recommending the project to friends or colleagues or by sponsoring again, we'd be very grateful. We are offering organisations and individuals the opportunity to champion one of these birds and choose their name in return for a donation of £3,000 to help cover the price of the satellite tag. If you are interested, or know someone who is, then please contact Gary Conway.