Catching up with a record-breaker: an interview with Arjan Dwarshuis

After a successful 2016 spent smashing the world year list record with a total of 6,833 species, Dutch birder Arjan Dwarshuis is back in his native Amsterdam — and we caught up with him for a chat about the mother of all birding years. Mark James Pearson asks the questions.

Why and when did you decide you were going to go for it, and what were the biggest sacrifices you had to make?

I'd dreamed about doing a world big year since I heard of American ornithologist James Clements' record-breaking year in 1989 (3,662 species), and I saw the potential to use a big year to reach out to lots of people, stress the importance of conservation and, most importantly, to show kids that birding and nature in general is cool. I decided to go for it in the fall of 2014, giving me well over a year for planning, finding sponsors, contacting guides and a million other important things. There were no major sacrifices — my friends and family supported me every step of the way and my girlfriend (who is a fanatic birdwatcher herself) joined me in South Africa, Spain, Peru and Ecuador. Going away for a year is of course a risky endeavour for a relationship, but we share the same passion for birding and I'm happy to tell you that this year brought us even closer together.

You were eventually aiming to raise 100,000 euros for conservation — how did the fund-raising go?

So far I've raised well over 20,000 euros for the Birdlife Preventing Extinctions Programme and I'll continue until I reach my goal — that's the least I can do for all the incredible endangered birds I saw. I've found that raising funds for a cause that doesn't involve human suffering is bloody hard — people are far more willing to donate to a humanitarian cause, which of course is very understandable, but they don't necessarily see that conserving nature and our ecological heritage is vital for the future of our planet and the entire human race.

Was there any point during the year when you thought, 'I'm not going to break the record'?

To be totally honest, no :)

Which were your luckiest and unluckiest destinations?

The luckiest destinations were definitely Papua New Guinea, Indonesia and Ghana. I visited these countries during the heart of the rainy season, but hardly experienced any rain. That's because of the aftermath of a heavy El Niño year. My unluckiest destination? Maybe Uganda; we missed my two most wanted species here — Grauer's Broadbill and Green-breasted Pitta. I think I can honestly say, when looking back, that being lucky was an understatement. I didn't get sick for a single day [of the year], almost all my flights left on time and I rarely experienced bad weather. 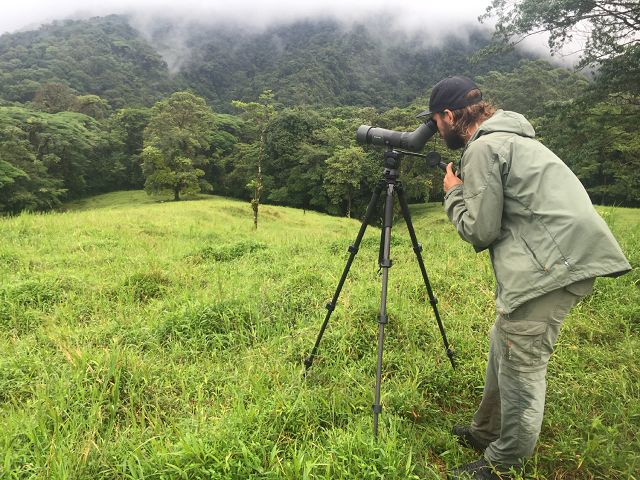 There must've been countless memorable moments during the year, but off the top of your head, can you give us one which really made you realize and appreciate the gravity of your quest?

20 November 2016! The alarm went off at 2.15 am. I had good reasons to get up so early since it was that day we would embark on a quest to find Central America's most mythical beast, Horned Guan. This extraordinary bird is found almost exclusively in remote cloudforests in the highlands of Guatemala and the extreme south-western part of Mexico. It is rare, endangered and utterly bizarre-looking — and few birders ever get a chance to come face to face with it.

At 2.15 am we said goodbye to the comfortable Los Tarralis Lodge (part of the privately owned Los Tarralis Reserve which protects the cloudforest in which the guan finds a safe heaven) and set off in a 4×4 with John Cahill and local guide Lester De Leon. My dad unfortunately had to stay back at the lodge because of a leg injury.

At around 4 am we arrived at the starting point of the Sendero de las Lagrimas — literally 'The Trail of Tears' — a name it bears for good reason... the starting point is at 1,400 metres, on the lower east slope of the famous Atitlan Volcano. The guan is found at an altitude about a kilometre higher. With our headlights on we followed Jerardo 'Lalo' Lopez, the local trail guide, up the mountain. At first I thought 'this isn't too bad', but of course a volcano becomes steeper towards the crater. An hour later, pouring with sweat and almost crying, the name 'Trail of Tears' suddenly made a lot more sense!

Finally, just before daybreak, John's altimeter read 2,500 metres. We were right on the money. Since I was pouring with sweat, only wore a T-shirt and it was about five degrees Celsius up there, I was soon shivering. After a very welcome sunrise the waiting game began, but after three hours nothing had happened. I knew that if you don't find the guan within the first two hours after dawn your chances decrease dramatically. We decided to split up to increase the odds. John went higher up, Jerardo went off-trail to check out a steep ravine and Lester and I went downhill. We had little success downhill and I was just telling myself 'this is never gonna happen' when suddenly I heard somebody whistling from higher up. This could of course only mean one thing — somebody had found the beast!

I raced up and soon ran into Lalo. He had indeed found a guan! I followed the little man — who has the stamina of a racehorse — uphill, almost passing out from sheer exertion. After going uphill for a while Lalo took a hard left and plummeted straight down into a ravine. I followed him blindly down the abyss, half falling, half running and half gliding. There was only one thing on my mind and that was Horned Guan. Suddenly Lalo stopped and pointed at a fruiting tree and there, totally oblivious to its perplexed observer, sat the most awesome creature I'd ever seen. I love it when a plan comes together! 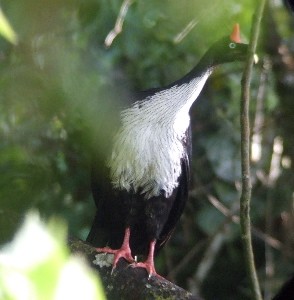 The pressure to keep pushing must've been very taxing. How did you cope, and did you have any particular methods that helped?

With everything that you do every day, you develop a routine. I found it generally easier than I'd envisaged, although it's important to minimize alcohol consumption — and as an Amsterdam bartender that is quite a challenge! It's also crucial that you don't take unnecessary risks, you sleep whenever you can and you eat vegetables and fruit when you have the chance. Most importantly, joke around and don't take yourself too seriously — it's far easier to push yourself if you make sure you always have fun while doing it.

What advice would you offer any future challengers?

Spend at least one month in Antarctica, and make sure that you party a lot and eat lots of fast food along the way! But seriously, my advice for future challengers ... only do it if you love birding more than anything else in the world. Have fun every step of the way, and don't put your relationships at risk. Make sure you reach out to a lot of people along the way and stress the importance of conservation. Document everything well, for yourself and for the rest of the world. For logistics, itineraries and so on? You're on your own, buddy!