Cape Clear Island is situated in the south western corner of Ireland in an ideal position to catch both the seabird passage and migrant passerines from both east and west. Access to the island is relatively simple with most major airports in the UK running flights direct to Cork. From there it is a two-hour bus trip, or car hire is available at the airport. Ferries run from Swansea to Cork, Pembroke or Fishguard to Rosslaire and from Holyhead to Dublin. Once in Baltimore, the island ferry, the Naomh Ciaran II, leaves twice daily throughout the year, with extra sailings during the summer months. The trip to Cape takes roughly 40 minutes – depending on the weather!

The Cape is naturally split into two halves by the Waist, a narrow valley with two of the best birding areas on the island located there. The western half consists of small farms and large areas of heathland, lake and bogs. The eastern half, however, is far more agricultural in habitat, with many small farms and domestic gardens.

Those of you who were lucky enough to see the Blue-winged Warbler in October 2000 were given a brief glimpse of the many delights Cape Clear has to offer. Cotter's Garden is the first major birding hotspot you reach after leaving the Ferry. This small enclosed garden has accomodated the likes of the Blue-winged Warbler, Yellow-bellied Sapsucker, Grey Catbird, Thrush Nightingale, Pallas's Warbler and many more! Usually a spot to visit briefly in the early morning, it is quickly apparent if a fall of migrants has taken place. It is a great place to spend a few hours in the afternoon sunshine, looking out over Roaringwater Bay to the mainland beyond - I have seen Risso's and Common Dolphins from here! The garden is the traditional ringing site, although nets are now being used in the Nordy Wood as well (see below). The garden consists of a line of Sycamore, Spruce and Willow on one side, with Fuschia bushes, Escalonia, more Willows and another Sycamore on the other.

On the other side of the Waist is the Nordy Wood – a small plantation of Alders, Willows and Sallows with a small stream running through it. Although the 'wood' is very small, there has been a good number of rarities found here, such as Greenish and Pallas's Warblers, Red-breasted Flycatchers and Common Rosefinch. 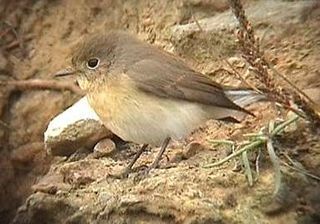 Heading west from the Waist along the Low Road, you arrive at a relatively new garden with superb habitat for passerines. Access to the garden is not encouraged, but the whole area can be adequately covered looking down into it from the road. A quick glance from here out to sea will give you an indication of whether a seawatch is going to be worthwhile.

Towards the end of the Low Road you get to the East Bog and have to make a decision – whether to go out to the Wheatear Fields or to go through the Central Bog and on to the West Bog. Both areas are excellent for migrants, while the former route will take you towards Blannan, where the bulk of the seawatching is carried out. Blannan is not a place for the faint-hearted! The walk along the sidelands is safe enough in dry weather, but when it's windy and the grass is wet, it is no picnic! The rock itself holds the same dangers; when wet it becomes extremely slippery and perilous. However, once out on the tip the views obtainable of passing shearwaters and skuas can be incredible!

The Wheatear Fields are large areas of short grass, anthills and, in wet weather, small pools. This can attract a variety of species from waders to pipits and wagtails and is definitely worth a look. The East Bog holds a small breeding population of Sedge Warblers and can be viewed from the road quite easily. Central Bog is an area that has been drained in recent years, leaving a ditch through its centre with a small amount of reed bed. This also attracts many species as there is a small area of open water, so ducks, waders, pipits, wagtails and buntings are regularly seen.

The West Bog, in many Irish birders' eyes, is one of the best spots on the island, with a large expanse of reed bed, open water, stone walls and small trees all set in a natural amphitheatre. It is a good area for shrikes, pipits, Wrynecks, wheatears and waders, as well as the odd rarity! Walking up from the West Bog you come to a small line of Blackthorn and Willow trees with a couple of small pines. The birds seem to funnel up from the Bog through this spot and on towards the Lake and then to the Waist. It's a very easily watched spot and birds just appear from nowhere, even when you've been there for an hour or more with nothing on show!

The Lake is freshwater and holds very little life within it but the gulls like it! There are two very good gardens at the western end of the lake with trees, shrubs and vegetable patches which can keep you looking for hours! Yellow-rumped Warbler and Dusky Warblers have turned up here in recent years. From here, follow the road back to the Waist checking the many small paddocks and stone walls - Common Redstarts and Black Redstarts are frequent visitors.

Heading east from the Waist, the best route is via the Nordy Wood to the Youth Hostel in South Harbour. A wooden seat below the wood is a great spot to do a bit of whale watching - Minke Whales and Leatherback Turtles have been seen from here - while keeping an ear open for the odd call emanating from the trees!

The Youth Hostel garden is much diminished from its heyday but still offers a good deal of cover with bushes and a few pine trees. Pied Flycatchers and Red-breasted Flycatchers like this area, as do wagtails, pipits and many warblers. Again, it's decision time – do the Lighthouse Road or go up the Glen?

The gardens on the Lighthouse Road offer superb cover and are easily watched from the roadside. The first two, side by side, are good spots for arriving warblers, while further up the road there is a large garden with Guinea Fowl and Chickens, which can attract warblers, finches and buntings. From here it is possible to cut through the fields to the Post Office, rejoining the Glen route. The Post Office has a small pine plantation, boggy fields and a small garden with fuschia bushes – ideal for warblers, finches, buntings and pipits. For good reasons, this is one of the hotspots on the island.

Continuing up the hill past the post office, you reach the top of the island. The views from here are spectacular, looking across Roaringwater Bay towards the Mizzan Head and all the small islands between. Go straight across the crossroads and you will arrive at the Alderwood, once the largest stand of trees on Cape, though unfortunately there are very few left standing now. The few trees and gardens here provide an excellent area for migrants, Radde's Warbler and Olivaceous Warbler being two of the rarer ones in recent years.

On again to the Secret Valley, a small line of Blackthorn trees, a good spot for thrushes and warblers. This is another area sadly diminished from its former glory, but can still provide the odd surprise. Below here on the coast is a fish farm that can hold waders, pipits and wheatears, plus the odd rare gull – Ross's Gull, Glaucous Gull and Iceland Gull have all been recorded.

Following the road, you will eventually return to the Waist and a well-earned rest in Cotter's Garden! From here, you can see the Observatory across the harbour. The Observatory has been in existence since 1959 and has recently been renovated to a high standard, providing seven beds for visiting birders at a reasonable price. Ideally positioned in North Harbour, the Observatory is only a short walk from the ferry berth and is close to many of the main birding spots on the island. For booking accommodation at the Observatory, see useful addresses below.

Pelagics are organised by local boatmen and usually last for two to three hours. The advantage that Cape Clear has on many mainland sites is that we are already out to sea, so we don't have to go much further! Most trips stay within four miles of the island which gets you into the main stream of shearwater passage, along with petrels, skuas and gulls. With the help of a bit of chumming, excellent views can be had of Great Shearwater, Cory's Shearwater, Sooty Shearwater and Manx Shearwaters, Great Skuas, Pomarine Skuas and Arctic Skuas, Storm Petrel and the occasional Wilson's Petrels. Many cetaceans have been seen from these trips, including, Minke, Fin and Humpback Whale, Common, White-sided and Bottlenose Dolphins, Common Porpoise, Leatherback Turtles and Sunfish.

When you consider the size of the island, there is an incredible diversity of species to be seen here on Cape Clear, and with the ease of getting here from anywhere in the UK, it should be on every birder's list of places to visit!

Cape Clear Bird Observatory: Bookings on 00353 1 280 8237 or email the warden Steve Wing stevewing@eircom.net for info or dmurphy@birdwatchireland.org for bookings.