Compared with continental Europe, Britain is relatively poor for woodpeckers. Of the three species that breed here, two – Great Spotted and Green – are relatively common and widespread. Lesser Spotted, however, is among Britain's fastest-declining species. A fourth species, Wryneck, once bred sporadically in southern England, but is now recorded here only as a scarce passage migrant. The three breeding species are very different in appearance and most unlikely to be confused so here we focus on the more tricky task of ageing and sexing them. 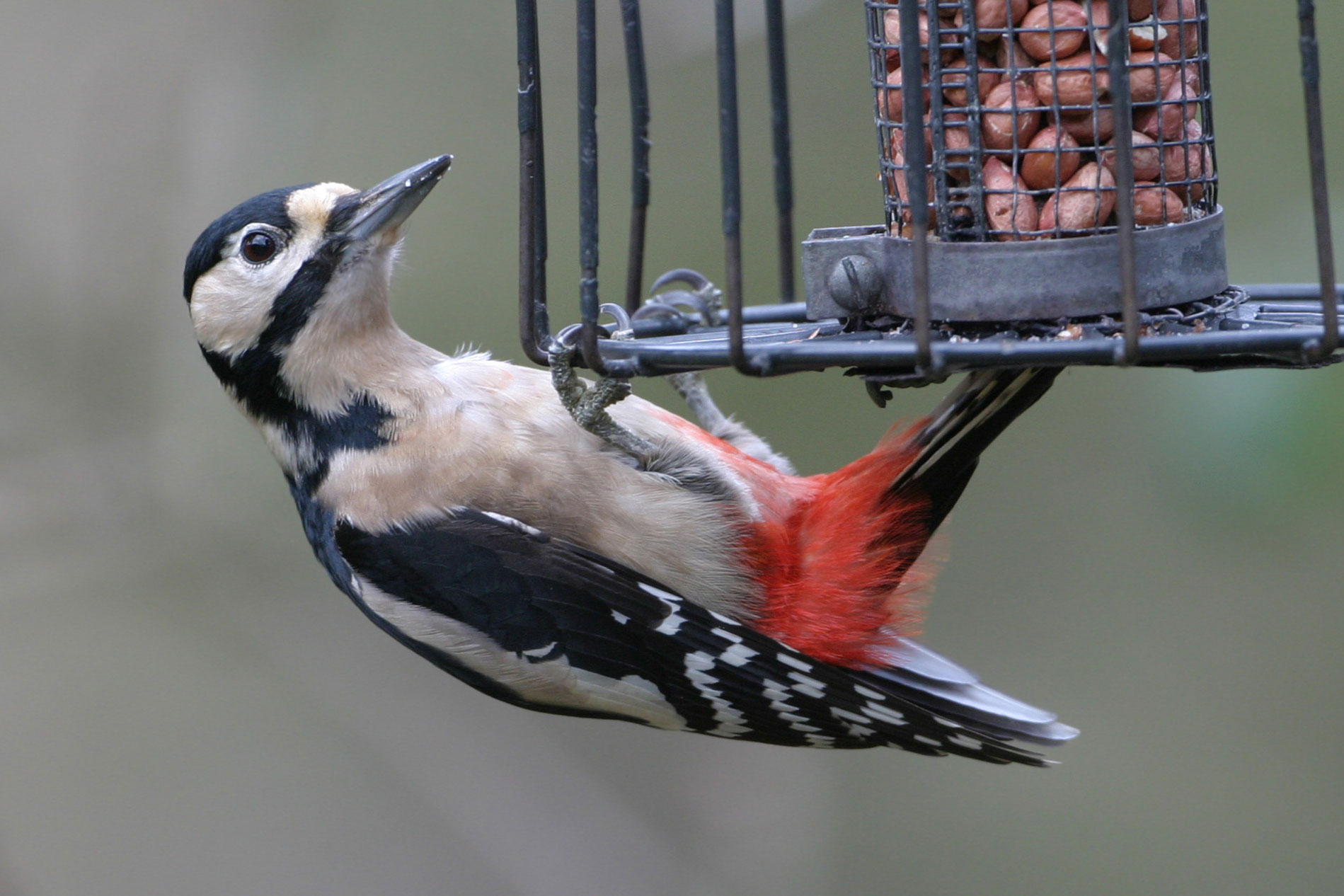 Great Spotted Woodpecker (West Stow, Suffolk, 11 December 2010). Woodpeckers are firm favourites, with Great Spotted Woodpecker being particularly popular as it is easily attracted to garden feeders. This bird's bold black, white and red plumage with large white 'shoulder' patches readily identifies it to species; sexing it is less straightforward at this angle as the nape is largely obscured, but the black band below the eye appears to continue onto the back of the head, indicating a female – males have red nape patches (Bill Baston).

This species has an almost exclusively European range, found throughout the Continent except in Iberia, Ireland and the north of Scandinavia. In Britain it occurs widely, though it is absent from the northernmost parts of Scotland. It is highly sedentary.

This large, flamboyant and noisy woodpecker is a familiar inhabitant of woods, heaths, parks and gardens and can also wander out into agricultural land. Although strongly reliant on trees, it also feeds on the ground, usually in open grassy areas, and specialises in plundering anthills.

It normally draws attention to its presence with the familiar loud and distinctive laughing 'yaffle' call but it also 'drums', albeit relatively rarely and rather weakly. When seen it is a highly distinctive bird: large and stout billed, and very strongly undulating in flight.

It is bright grass-green above, with a bright yellow rump and lower back visible when flying away which can momentarily suggest a Golden Oriole. It is pale green-grey below and the flight feathers are weakly barred. The head comprises a vivid red crown and nape, a dark area around a pale staring eye and a dark 'moustache' which is red bordered with black in adult males and wholly black in adult females.

Juveniles resemble the adults, but have dark bars across the face and underparts and white bars above. The sexes differ exactly as do adults according to the colour of the 'moustache'.

This species has a very large pan-Palearctic range, stretching from Iberia and Morocco in the west to Kamchatka in the east. The British population (of the endemic subspecies anglicus) is resident and largely sedentary, but numbers are supplemented in some autumns by influxes of the stouter-billed nominate form from Scandinavia or beyond.

This is our most familiar woodpecker: a common inhabitant of woodland throughout Britain apart from Ireland and northernmost Scotland. It is a particularly frequent visitor to garden feeders.

It usually gives its presence away with the familiar loud kik call and fast, loud staccato 'drumming' in early spring, usually on trees but also on telephone poles or even metal structures. In flight it undulates very strongly with complete closure of the wings. It is very rarely seen on the ground.

When seen well it is a bird of striking black-and-white contrasts, with large oval white scapular patches, black-and-white barred flight feathers and a splash of brilliant red on the undertail coverts. As with the preceding species, we must look at the head to tell the sexes apart. Males have a discrete red patch on the nape, absent in the female in which the nape is all black.

Juveniles closely resemble adults, but the undertail coverts are paler red, the white scapular patches are darkly barred and the whole of the crown is red with a narrow black border – the overall effect inviting comparison with Middle Spotted Woodpecker of continental Europe.

This diminutive woodpecker also has a large world range, occurring similarly from Iberia in the west to Kamchatka in the east. In Britain the sedentary endemic subspecies comminutus is declining fast and has disappeared from many of its former haunts. It is now spread very sparsely indeed across parts of southern England and is increasingly unlikely to be encountered by chance.

It is associated with mature woodland, parks and orchards, but in winter can wander more widely, sometimes joining parties of tits in river valley alders. It can also wander into reedbeds. A bird on Shetland in October 2012 (a new species for Scotland following its earlier removal from the Scottish list) was presumably of the occasionally irruptive continental nominate form, though it was not possible to prove this hypothesis.

This is a much less conspicuous species than its larger cousins. Its call is also kik, though softer than that of Great Spotted, and its 'drum', although longer than that of Great Spotted, is quieter and often given in two parts. It has a territorial song recalling Common Kestrel or Wryneck – a series of piping notes slowing in tempo towards the end.

When finally seen, this is a truly tiny woodpecker, barely larger than Eurasian Nuthatch. It is compact, small billed and short tailed. Its flight is more fluttery, less dynamic, than its larger relative.

It is black and white, but lacks the prominent white scapular patches of Great Spotted, having instead a pattern of black and white transverse barring right across the back, as well as black and white barred flight feathers. The undertail coverts are white and there is some dark streaking on the white flanks.

Again, the head contains the sexing features, males being red crowned and females dark on top of the head. Juveniles are rarely seen but are browner below. As in the adults, males have some red in the crown. 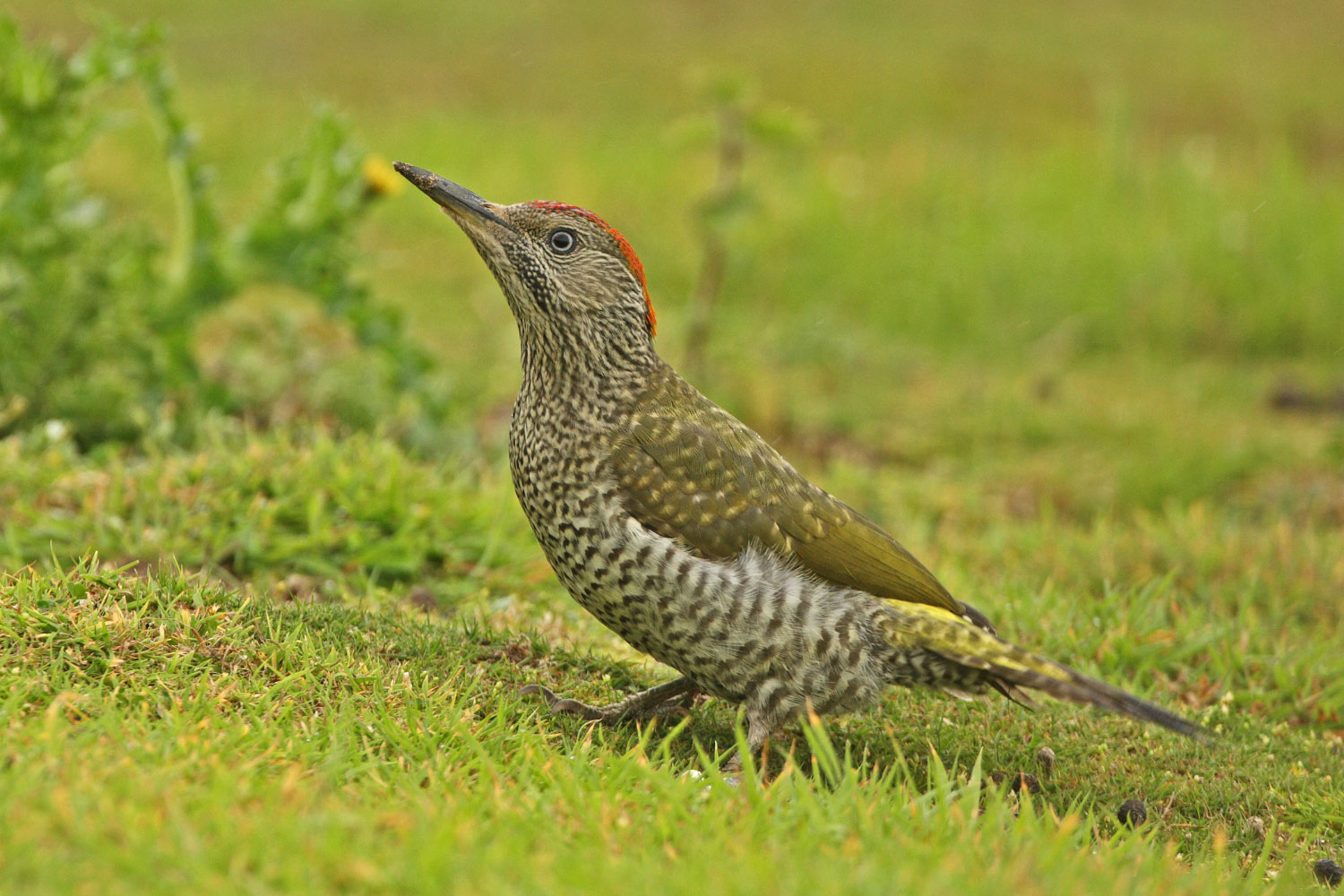 Juvenile Green Woodpecker (Eccles, Norfolk, 4 August 2011). This Green Woodpecker is, typically, feeding on the ground, its mossy green hues blending well with the grass. Although it already has rich green upperparts and red on the head, it can easily be aged as a juvenile by the prominent heavy dark barring across the face and underparts and the whitish feather tips on the mantle, scapulars and wing coverts. Even as a juvenile it can be sexed: note the wholly dark 'moustache', which identifies it as a female (Neil Bowman). 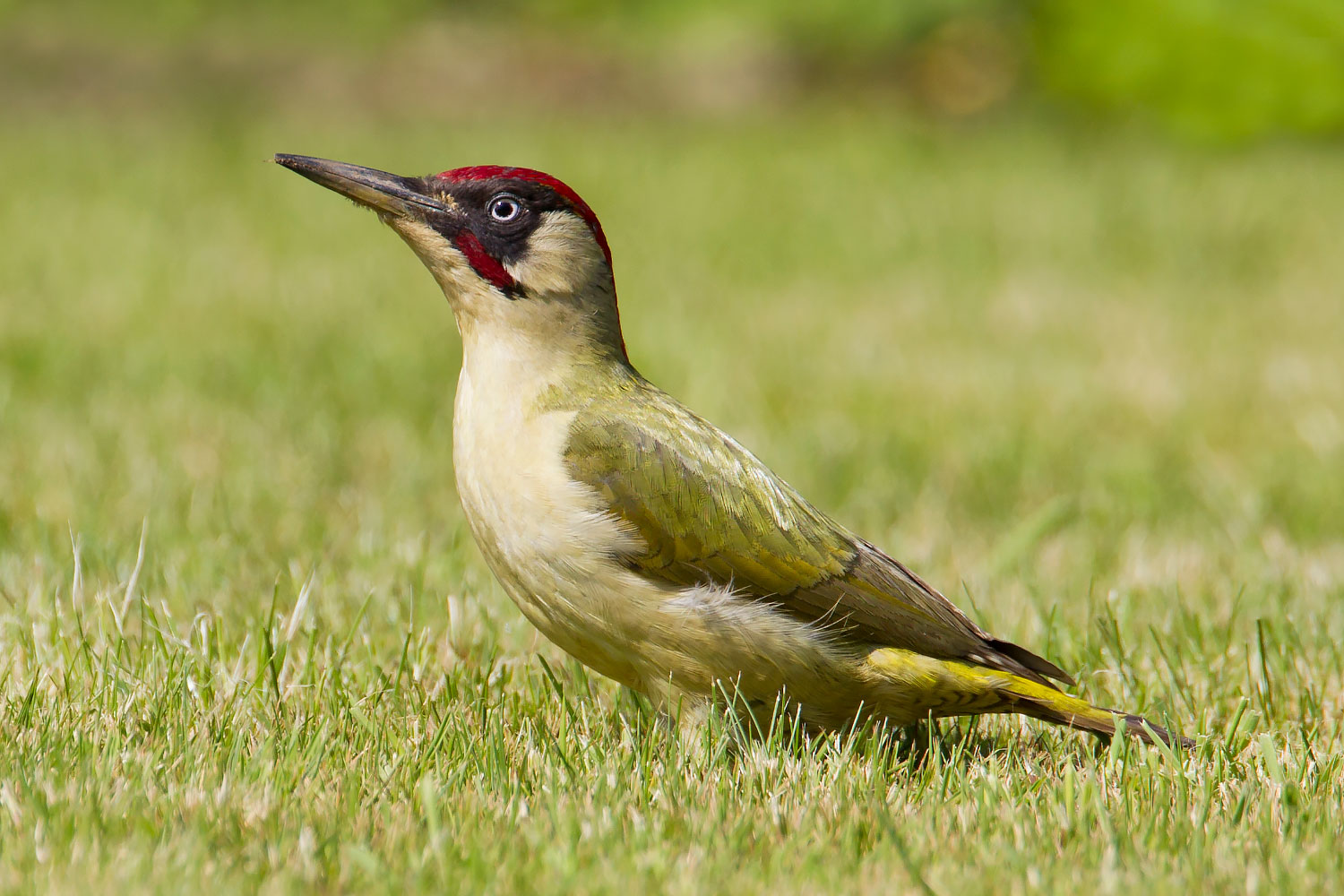 Male Green Woodpecker (Charlton Musgrove, Somerset, 22 May 2012). Caught in its characteristic 'bill up' pose, this Green Woodpecker is clearly an adult. It has no trace of barring in the upperparts or underparts, being instead a smooth green above and greyish below. The red crown and nape and black area around the eye are fully developed, while the obvious red hues in the 'moustache' readily identify it as a male (Oliver Smart). 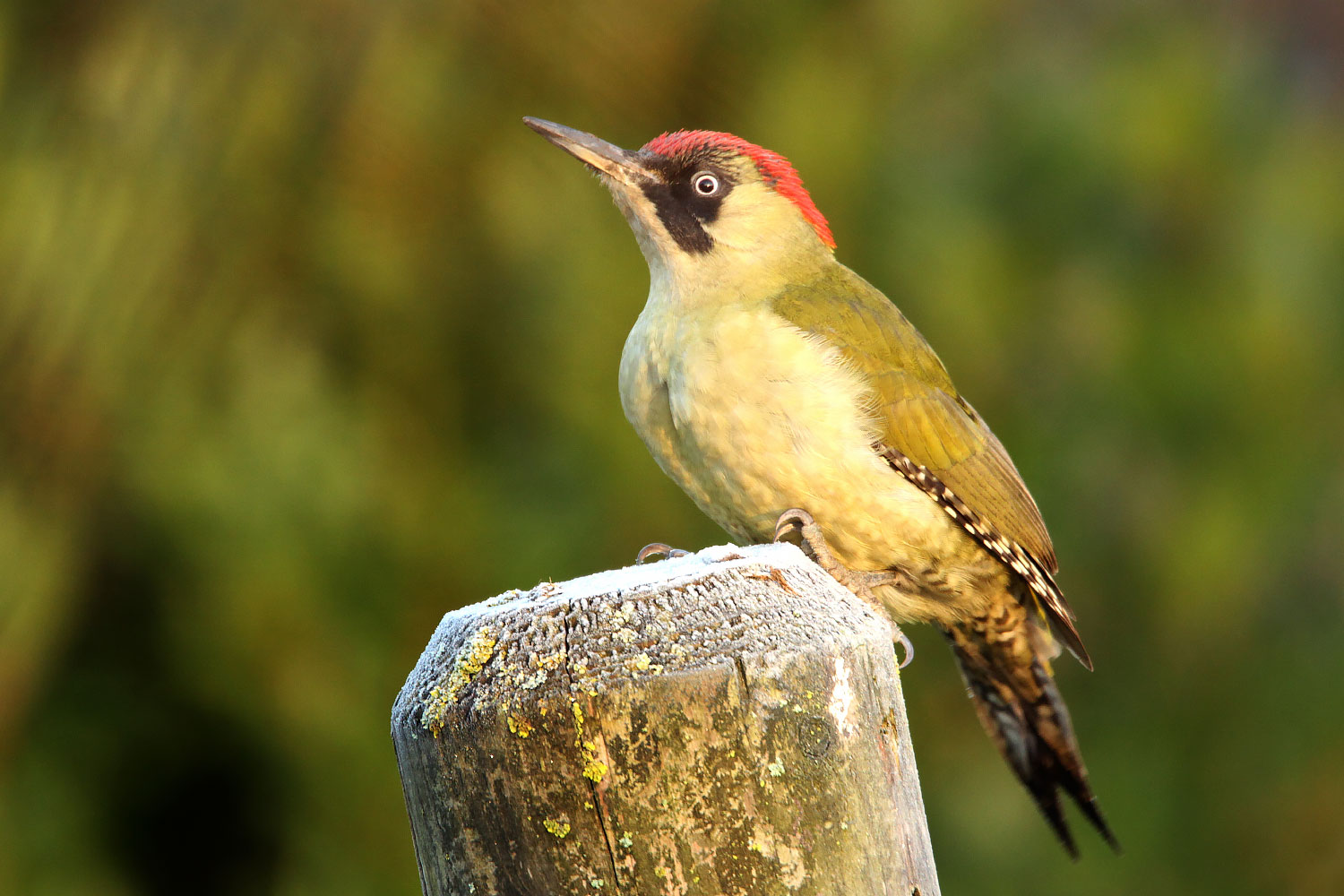 Female Green Woodpecker (Rainham Marshes, London, 28 December 2014). This adult Green Woodpecker closely resembles the bird in the preceding image. It differs, however, in its wholly black 'moustache' which lacks any red hues. It is therefore a female (Dominic Mitchell). 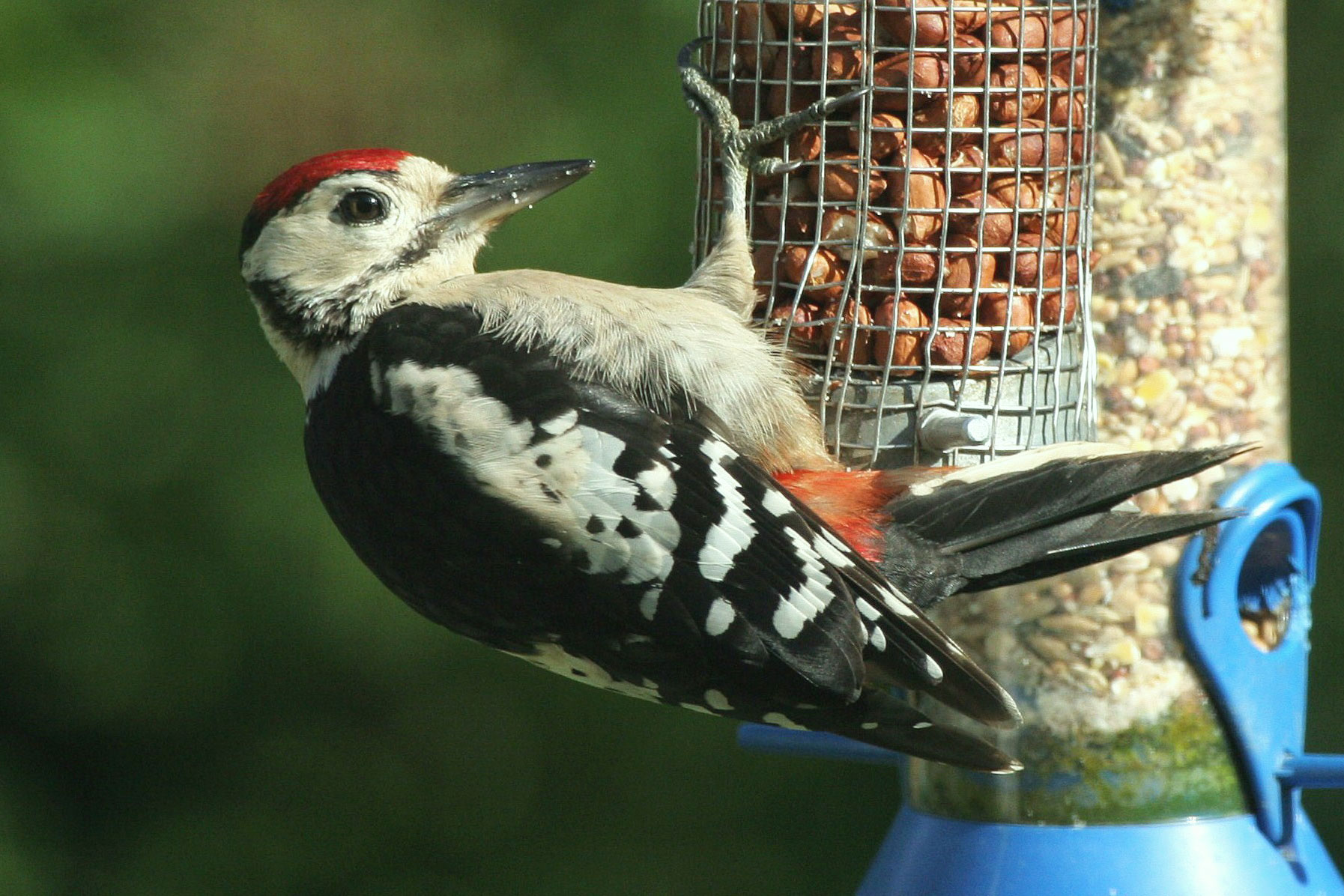 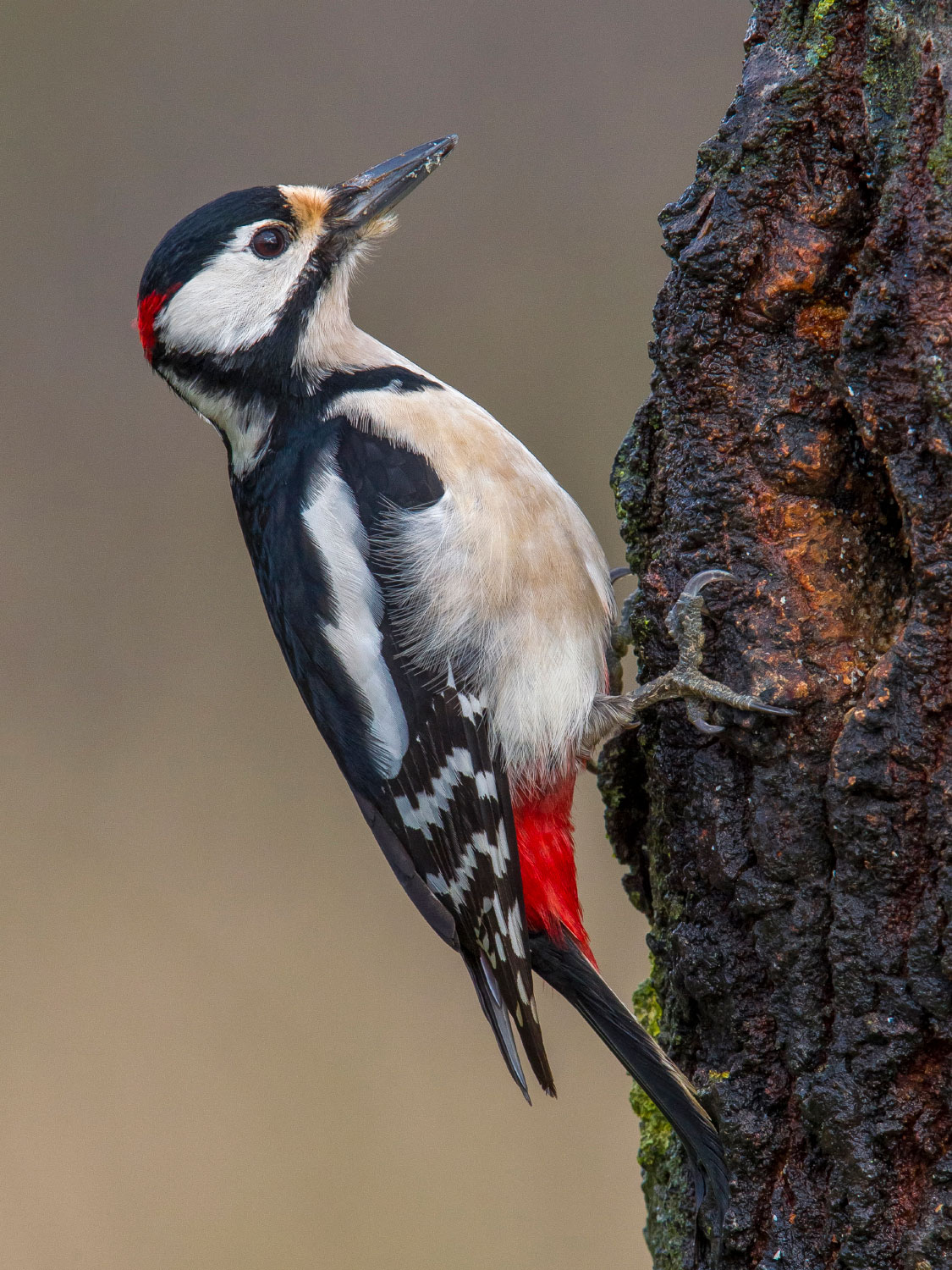 Male Great Spotted Woodpecker (Florence, Italy, 21 January 2013). This classic portrait of a Great Spotted Woodpecker allows an easy identification. With its dark crown, well-marked face, pure white scapular patches and rich red undertail coverts it can be further identified as an adult, while the discrete red patch on the nape allows us to sex it as a male. As this photograph was taken in Italy, this bird will be of the local subspecies italiae, an identity also suggested by the dull greyish wash on the underparts (Daniele Occhiato / www.agami.nl). 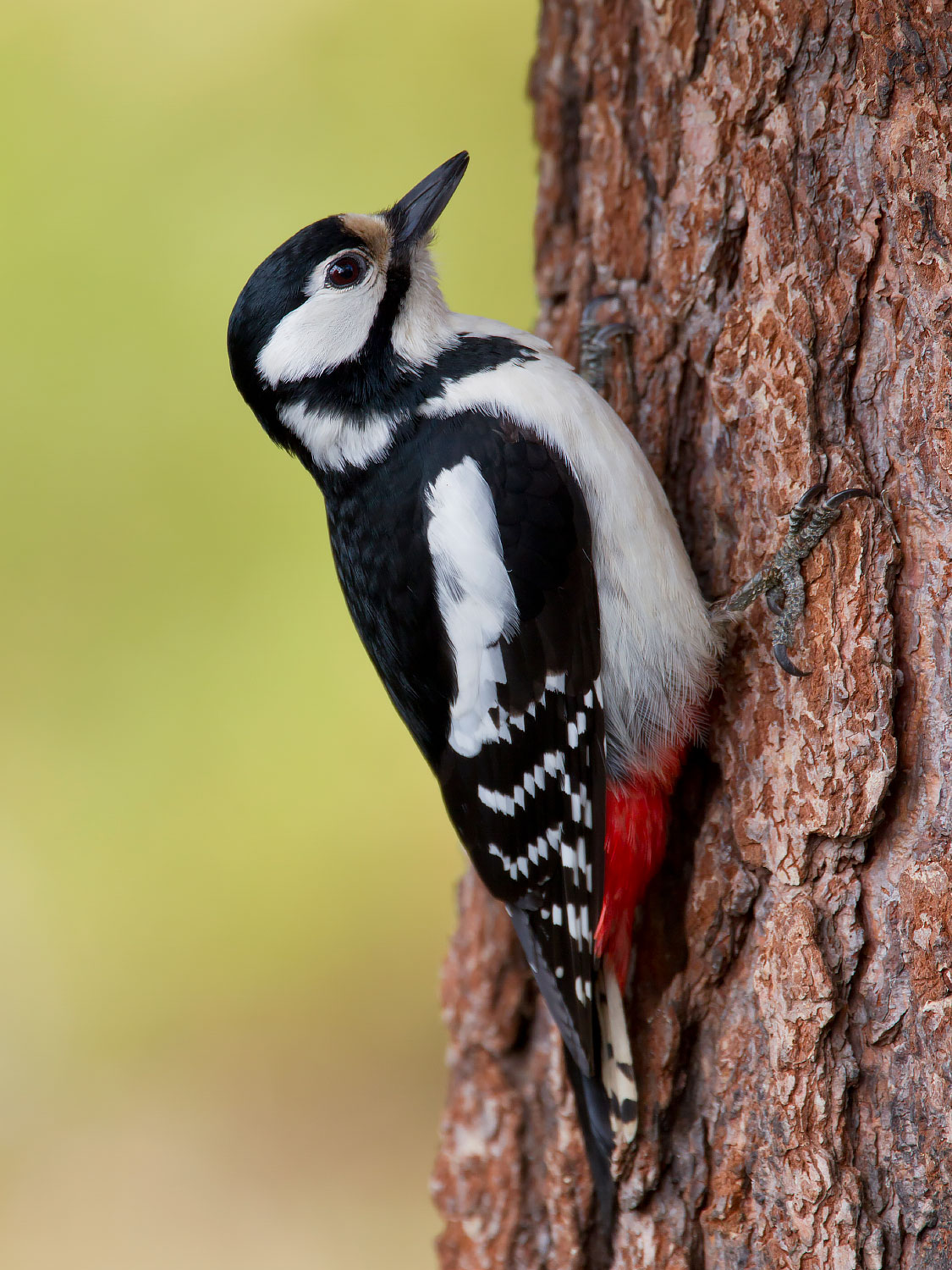 Female Great Spotted Woodpecker (Kuusamo, Finland, 18 April 2011). This bird shows almost the same set of features as that in the preceding image. It is therefore an adult, but note that the nape is wholly black, concolorous with the crown. It is therefore a female. This photograph was taken in Finland, so this bird will be of the nominate Scandinavian and Russian subspecies, an identity already hinted at by its rather stout-looking bill (Oliver Smart). 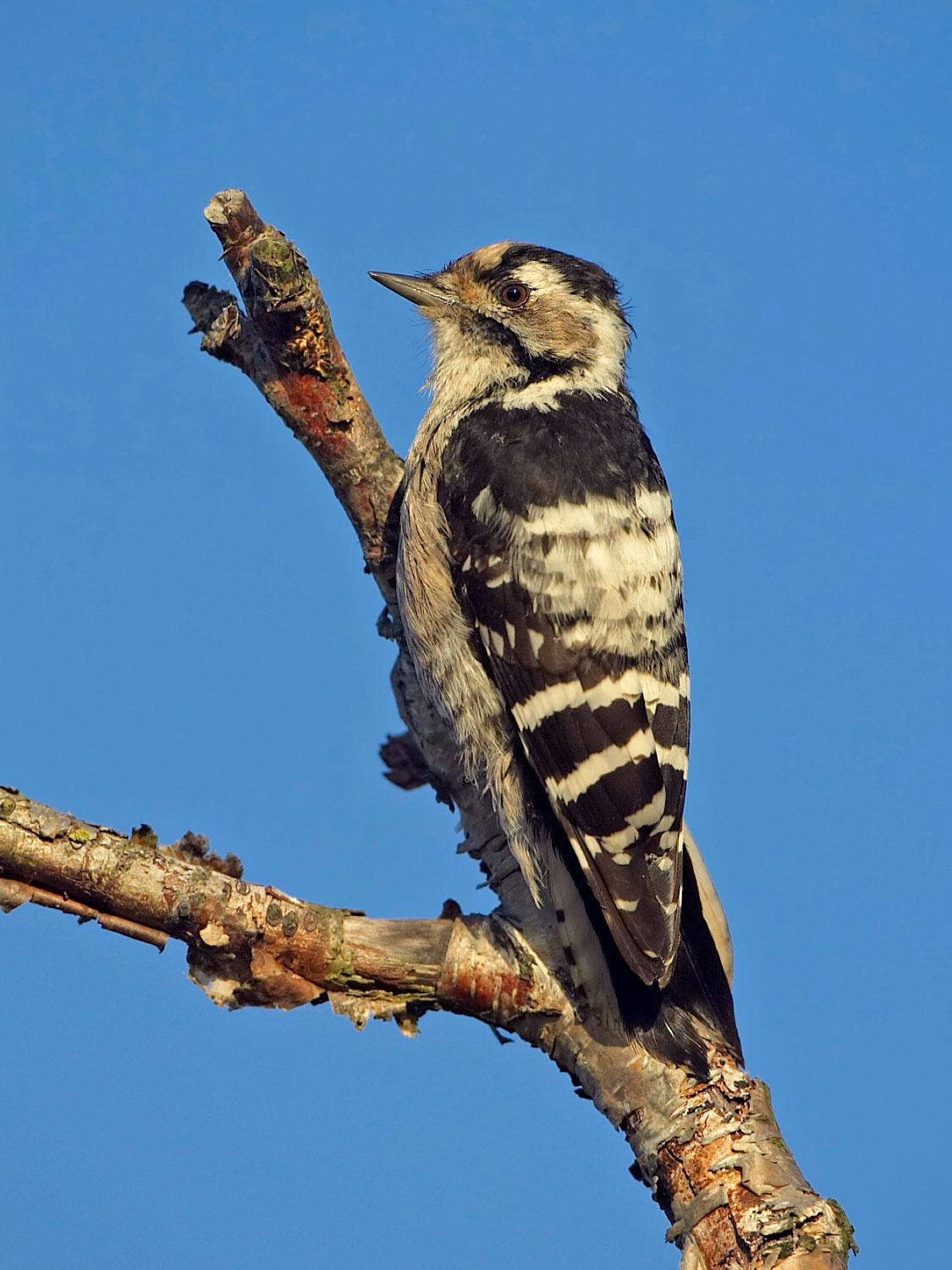 Juvenile Lesser Spotted Woodpecker (Hanko, Finland, 10 September 2003). This Lesser Spotted Woodpecker looks typically tiny and compact in the uppermost thin twiggy branches of a tree, and also shows the typical pattern of black-and-white transverse barring right across the back. It can be aged as a juvenile by the strong 'dirty' brown wash right across the underparts. This is a Finnish bird - the sight of a juvenile in Britain is an increasingly rare event (Markus Varesvuo / www.birdphoto.fi). 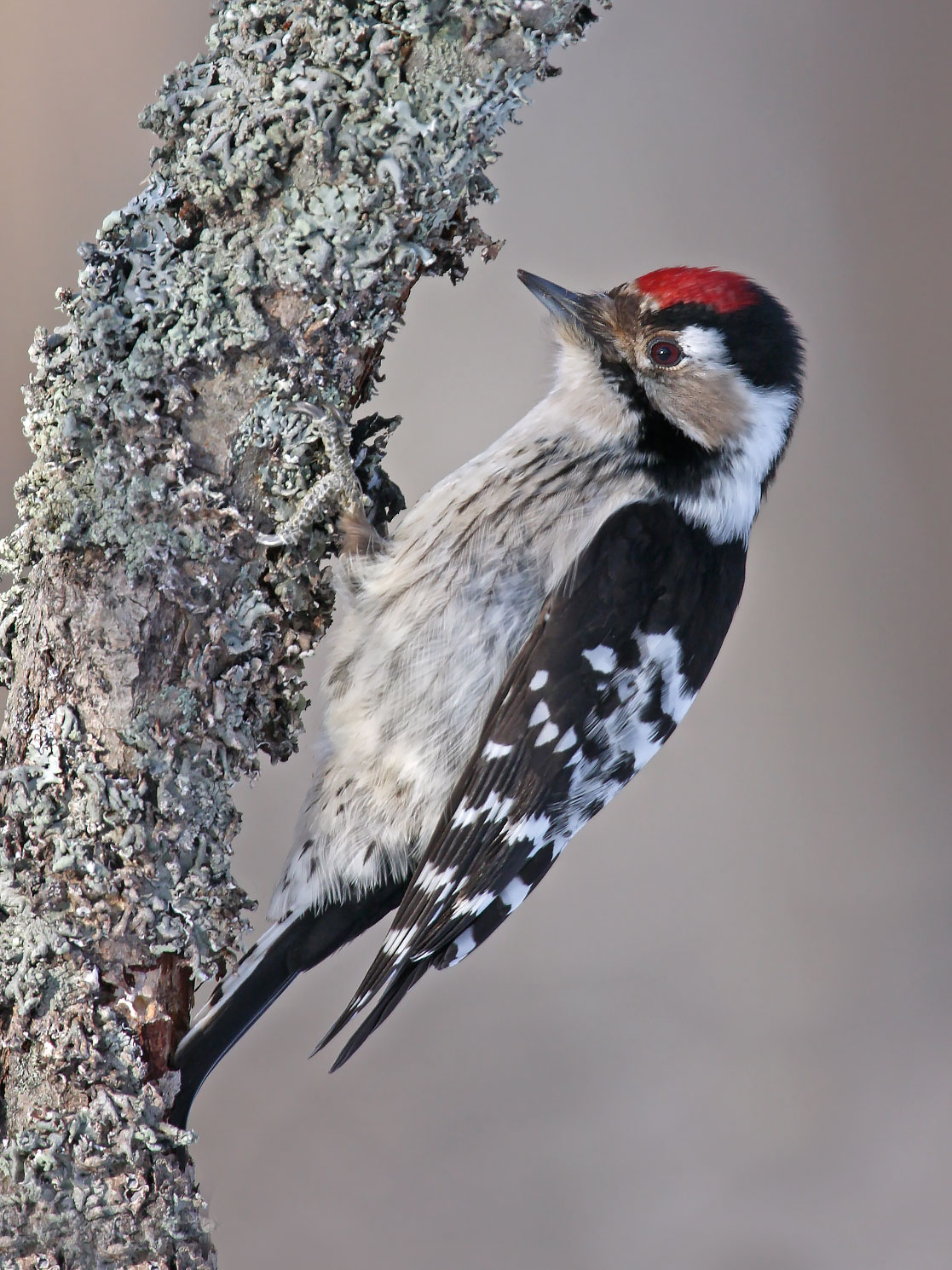 Male Lesser Spotted Woodpecker (Oulu, Finland, 8 March 2008). On this bird the black and white barring across the back can easily be seen, as can the absence of red in the undertail coverts, confirming that this is a Lesser Spotted Woodpecker. With its much whiter, 'crisper' underparts, this bird can be aged as an adult, while the bird's most prominent feature – its black-edged bright red fore-crown – identifies it as a male (Harri Taavetti / www.harritaavetti.fi). 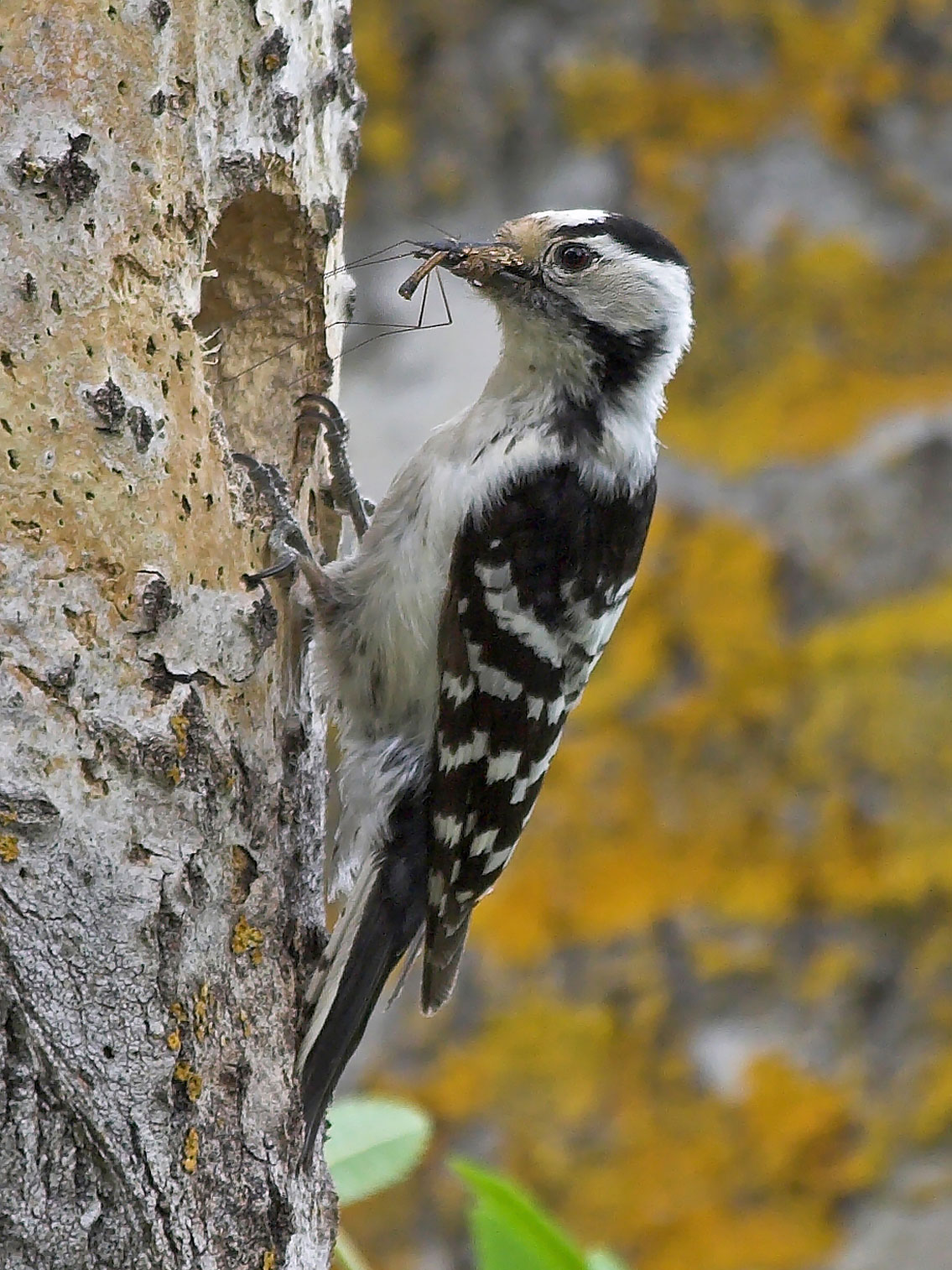 Female Lesser Spotted Woodpecker (Oulu, Finland, 10 June 2005). This bird is similar to the individual in the preceding image, but has no red anywhere in its plumage, its fore-crown patch being whitish. It is therefore a female. All the Lesser Spotted Woodpeckers illustrated here were pictured in Finland, so all will be of the continental nominate subspecies, though in the field British birds effectively look the same (Harri Taavetti / www.harritaavetti.fi).