Birding while you sleep: getting to grips with noc-mig ID

Surely, identifying the birds we record at night is easy, right?

When I began recording in 2016 I found things out the hard way – I couldn't identify anything! To start with, everything was completely out of context. It was not unusual for me to be sat at my kitchen table with a coffee in the morning, pouring over my recording from the previous night, only to be faced with identifying a series of sounds which sounded nothing like anything I'd heard before.

I soon learned that there are myriad noises made at night, which are either man-made or remain completely unexplained. As time has gone on, I've become more experienced at reading spectrograms; this has helped not only clinch those trickier calls (such as those of flycatchers) but also to rule out the 'mechanical' noises. With practice, you'll see they just don't look like a call, tend to be short and are often one-offs at strange frequencies. But even then, they end up in the 'unknown' folder just in case …

Before we start to look at identification, I want to stress straight away that I don't claim to be an expert on this – I'm just experienced at reading spectrograms and have a grip on the common stuff. I like to think I'm pretty good on calls in the field, yet I still bother the experts regularly with those I can't clinch at night. With the peak of spring fast approaching, we're going to look at some of the commoner species you're likely to encounter on your noc-mig sessions. This should act as a simple reference guide on what to look out for in the coming days and weeks, but note that most of the species below are typically encountered in autumn, too.

Living on the coast, waders and wildfowl are my most-encountered species in spring. Surprisingly, the most frequently recorded duck over my garden in Weymouth, Dorset, is Common Scoter and, judging by reports over the past few years, they've been logged at night by many observers well inland, too. We all know small flocks turn up at inland reservoirs, but recently Common Scoter has been recorded moving in prodigious numbers overland at numerous noc-mig 'outposts' during the hours of darkness. Common Scoter call is a simple pyu repeated over and over, with around one second between each call. My first record was of two birds calling for over a minute as they approached, flew directly over and continued. 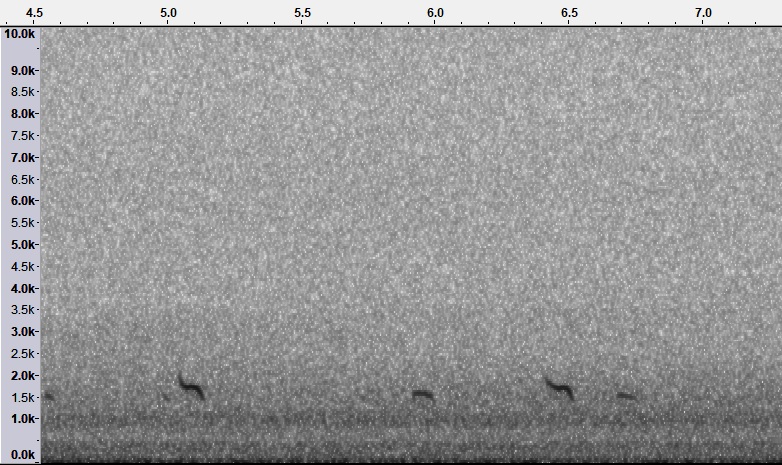 Common Scoter frequency range is just above 2khtz, dropping to 1.5khtz. Once you've seen this a few times you'll be able to ID them without listening first. I like to think they look a little like a sun lounger (Joe Stockwell).

The next duck I regularly record is Eurasian Teal. These calls are higher in frequency than those of Common Scoter and a completely different shape, with a rise and fall producing more of a treel sound. I'd imagine most birders are familiar with the call of Eurasian Teal so this one isn't too tough; as you'll see further on with other examples, it's the context that throws you. 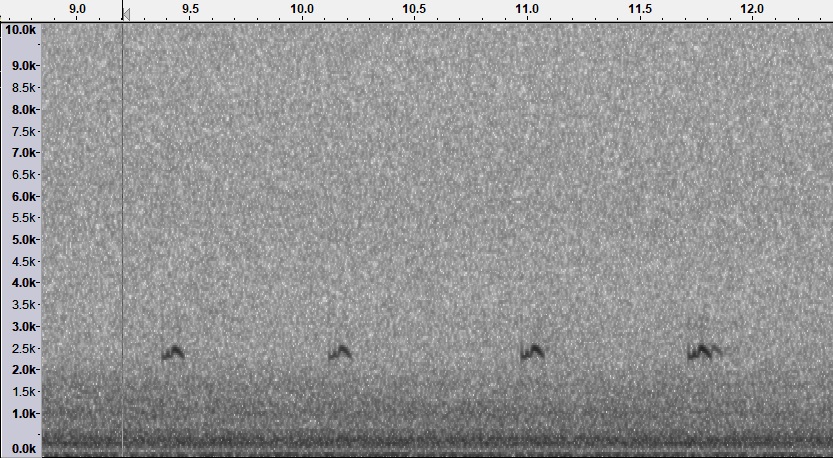 Eurasian Teal nighttime flight calls: frequency range begins higher than Common Scoter, at around 2.3khtz. These calls are also superficially similar to Northern Pintail, but those of the latter are at a lower frequency and occur far less frequently (Joe Stockwell).

The last duck to look at is Eurasian Wigeon. A flock flew over on my very first recording session back in 2016 and I can assure you I was hooked immediately. I've actually encountered Eurasian Wigeon fairly infrequently, but their calls can be confused with Eurasian Oystercatcher, which is why they're included here.

Nighttime flight calls of Eurasian Wigeon: a simple whistled wee-oo, rising to a peak before falling again. As you'll see below, Eurasian Oystercatcher is similar, rising and falling in the same way, but 'oyc' doesn't have a peak and shows more of a flat spot (Joe Stockwell).

Eurasian Oystercatcher can be expected just about everywhere. I've always found them to be exceptionally vocal, making life just that little bit easier as there are usually several calls to work with. Although probably down to my location, I've also recorded them displaying at night.

Nighttime flight calls of a Eurasian Oystercatcher. This one was giving the p-weet, though confusion can arise when you only record a weet, especially a single call. In such cases, a more regular and curved 'upside-down U' should be expected (Joe Stockwell).

Other commoner waders on the move now are Common Redshank and Little Ringed Plover. Thankfully, both of these species utter fairly straightforward flight calls at night and these will be familiar to many from daytime encounters.

Nighttime flight calls of Common Redshank are pretty much identical to what you'd hear during the day: a repeated tu-heoho, making a nice and obvious one to ID. On the above SoundCloud recording, you can hear the bird coming from some distance away before flying directly over the microphone (Joe Stockwell).

Little Ringed Plover is another recognisable nighttime flight call. The spectrogram is quite distinctive, too – note the early spike up to nearly 3.5khtz followed by an indented and gradual drop back down to nearly 2.5khtz (Ed Stubbs).

I will now move on to everyone's favourite garden additions: Common Moorhen, Eurasian Coot and Water Rail! All three species are recorded with great regularity and in the most surprising of locations too – as Nick Hopper has discovered, both Common Moorhen and Eurasian Coot appear regularly over Portland Bill during spring and autumn recording sessions, yet to see either by daylight you would have to count yourself exceptionally lucky.

Nighttime flight calls of a Common Moorhen are very distinctive looking on a spectrogram and, once familiar with them, prove a simple ID. Described as krek, these can be repeated for quite some time as the bird moves above your listening station. I've recorded them so low over the garden in the past that their wingbeats are audible (Joe Stockwell).

Nighttime flight calls of Eurasian Coot have a much more nasal quality than Common Moorhen and Water Rail. These too can be repeated for quite some time as the bird flies over. Coot is 'sadly' one of those species which seems to produce all manner of calls and resultantly can cause real confusion, as Simon Gillings alluded to in his previous article (Joe Stockwell).

Nighttime flight calls of Water Rail are sometimes described as kip notes. However, they will also give away a diagnostic 'piglet squeal' while on migration, which you can hear via the SoundCloud clip (Joe Stockwell).

This concludes a selection of some of the most regularly encountered species while noc-migging. Many are fairly easy to identify and, once you have a grasp of these, you'll be able to routinely confim them each time you encounter them. The more you record, the more species will begin to pop up, providing ever-more identification challenges – and I hope this has enthused more birders to start recording at night and identifying the sounds they come across. We will cover further familiar (and less familiar!) species in forthcoming articles as the seasons progress.