BirdGuides Photo of the Year 2010

Every year we are astonished by the number and variety of photos that are uploaded to our site, and 2010 was certainly no exception. The volume of photos approved is growing year on year, to the extent we were all shocked when we plotted the numbers on a graph. 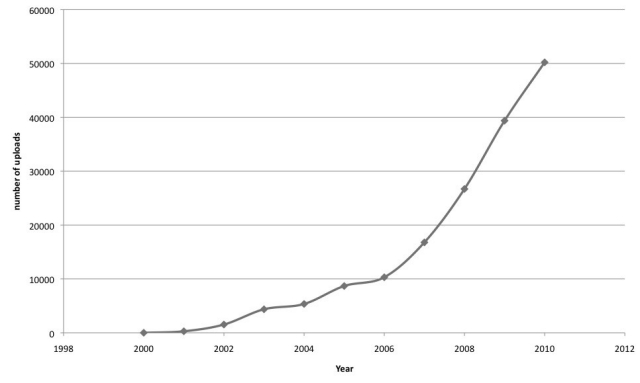 Number of photos approved per year.

The photos we have accumulated over the years now total 167,678, covering an amazing 3614 species and forms, and the associated 637,308 files take up a whopping 43GB on our servers.

Some species make more popular subjects than others. 2010's favourite species were (with number of uploads):

And if Waxwing was no surprise as top species, the top county won't astonish anyone either:

Julian is warden at the RSPB's popular Conwy nature reserve in North Wales, returning to his homeland this year after 18 years in East Anglia. Julian has been a keen birder since the age of 16. Although a decent rarity will still occasionally deprive him of sleep through excessive caffeine consumption, most of his birding is now done in North Wales, both at Conwy and along the coastal headlands such as the Little Orme and Great Orme. He's enjoying getting into unbirded bits of the countryside through BTO Atlas surveys, and is a Council member of the Welsh Ornithological Society.

Mike Toms has worked for the BTO since 1994. A keen amateur when it comes to photography, he mostly works with macro subjects, thus avoiding the problematic decision of which to take out birding: telescope or SLR and 400mm lens? Married to an artist, he has a strong interest in design and composition, and appreciates photographers who take time to plan and compose such stunning images as those appearing in BirdGuides' growing gallery.

Mike's twin passions for birds and photography have been with him since his teen years. The advent of digital photography has finally enabled him to combine these passions to create a rich collection of images covering over 200 British species, over 1000 of which are featured on his website. His images have appeared in a wide range of publications, both in print and in electronic media. Since suggesting the initiation of the Photo of the Year contest in 2006, Mike has acted as Photo Editor for BirdGuides, encouraging the development of bird photography through the Reviews of the Week and other activities. Having learnt the art and craft of bird photography the hard way, Mike now enjoys passing on his knowledge to others through tutorial articles, workshops and one-to-one training.

Winner of BirdGuides Photo of the Year 2010 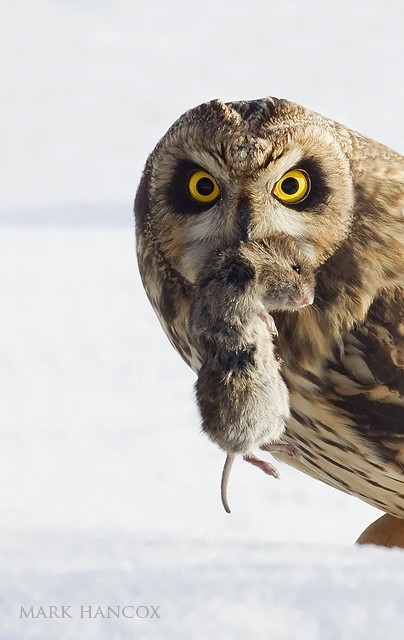 MA: "With over 50,000 bird photos uploaded by our contributors in 2010, an image has to have something special to stand out from the crowd. From a bird photographer's viewpoint, a good starting point for creating such an outstanding image is the choice of subject. Owls in general make for high-impact images: their unique appearance as specialised predators and their air of mystery generate interest, whilst their relatively human-like faces create a sense of engagement, especially when making full eye contact. The bright yellow eyes of the Short-eared Owl are particularly striking, as Mark Hancox illustrates with his head-and-shoulders shot taken in a snowy Lincolnshire setting during the coldest December for decades. As if a well-lit close-up of a Short-eared Owl outlined against the snow were not enough, though, Mark managed to catch the owl with a perfectly positioned vole hanging from its bill. The result is an image with a rare combination of immediate impact and lasting depth, as the viewer is transported from initial 'wow' to connection with the subjects and on to the story of life and death in a constantly changing environment."

JH: "Scroll through the PoTW page and this Short-eared Owl's stare makes you halt. You might think that the owl has done all the hard work here, but perhaps that's the secret of a great photo: a simple but fantastic portrait that makes you appreciate how the owl lives rather than immediately thinking about how hard the photographer worked. And then you realise...."

MT: "There is nothing more striking than the piercing stare of a Short-eared Owl and, as with Mark's other work, this is a beautifully presented portrait which really engages the viewer. Having worked on owls over many years, and having seen no end of owl photographs, I am still surprised by how much of an emotional reaction a good owl photograph can stir — and this is a great owl photograph.."

"The photo was taken on a four-day trip to photograph the SEOs at Worlaby Carrs in Lincolnshire. It had snowed really heavily and the only access was with the use of snow-chains to get us as far as possible. We then walked the further mile or so to reach the owls. I think this helped as there were only three or four people at the site and the owl was comfortable being approached. On this day the owl had hunted very well and had eaten three voles but kept hunting and started storing the voles at the base of a fencepost, which was when I took the shots."

Mark wins an iPod Touch loaded with a range of BirdGuides apps. 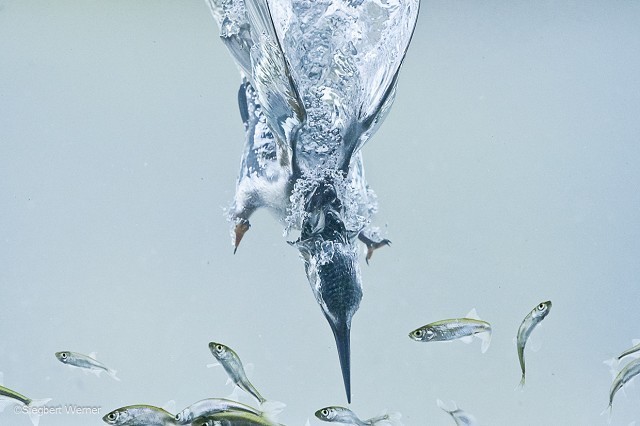 MA: "One of the most impressive aspects of modern wildlife photography has been its ability to reveal things that could never be seen by the human eye. Sometimes this is about place — taking us where we couldn't go ourselves — and sometimes it's about time — freezing action too fast for our senses to perceive. With his amazing underwater shot of a diving Kingfisher, Siegbert Werner combines both of these capabilities. Many people have watched a Kingfisher doing what it's known for, but actually to go with it below the water surface and see its swept-back wings amidst the air bubbles and (who'd have guessed?) splayed feet to control its dive, is a real privilege." 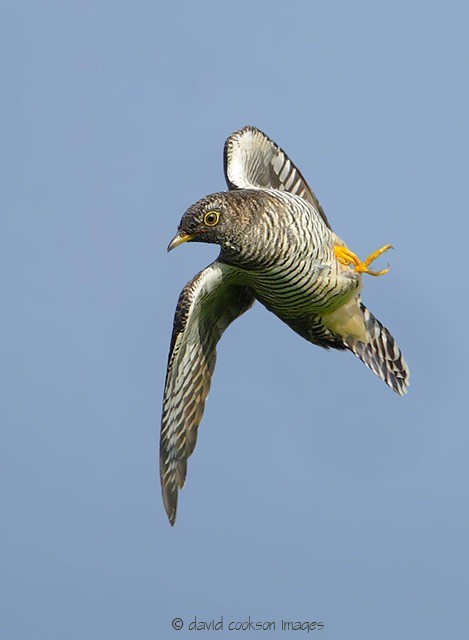 JH: "Not an easy subject to photograph in flight, even less so when the bird is in a 'barrel roll', so to get a sharp photo and to capture a sense of its movement without a blur is an impressive feat. And as the poster-bird of the decline in African migrants, there's a bigger story to tell here." 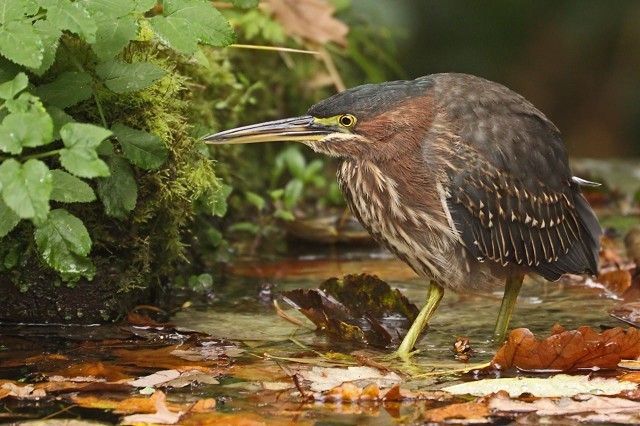 MT "This is a real birders' bird, beautifully captured and presented by Stephen Burch. The photograph has a wonderful balance, the bird in the habitat with enough going on around it, both in terms of detail and colour palette, to really set off the subject itself. I love the way that the heron is positioned within the image, the greens off to the left and the warm brown tones in the leaves to the right — all of which draw out the subtle colours of the bird's plumage. The low angle of the shot completes what for me is a perfect image of this stunning visitor. It's enough to make me wish I'd had the chance to go and see the bird." 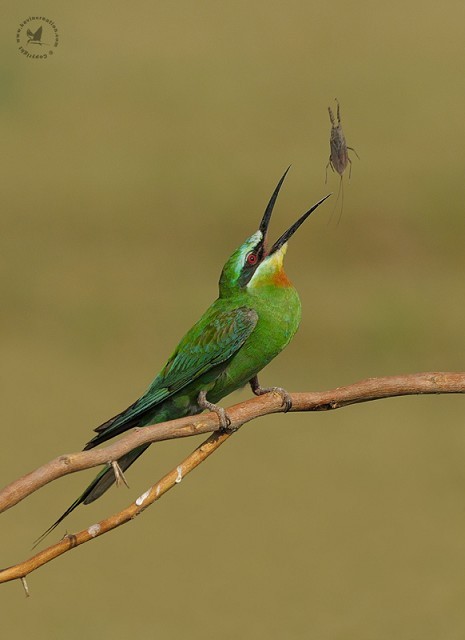 MA: "With their brilliant colours and sleek features, bee-eaters are regarded by many as being among the most beautiful and exotic birds in the world. Indian bird photographer Mital Patel certainly reinforced that view when he photographed the stunning Blue-cheeked variety in his home country. Mital angled himself perfectly relative to the morning sun to bring out the colours and details of the bird. A simple perch and diffuse background make for a classic composition that shows off the bird at its best. Mital's real achievement, though, was to combine aesthetics with action by freezing the bird as it tossed a water scorpion into the air before swallowing it. My favourite recipe for a bird image is one that conveys the beauty of birds and shows you something about how they live." 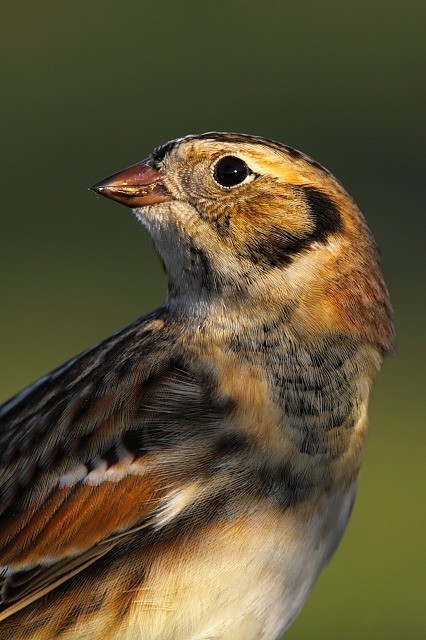 JH: "I always love to see these little winter birds, but so often the view is a fleeting one as they're either deep in grass or easily flushed and on the move. There's nothing 'clever' about this shot, it's a simple portrait that shows the beauty of its plumage in glorious detail." 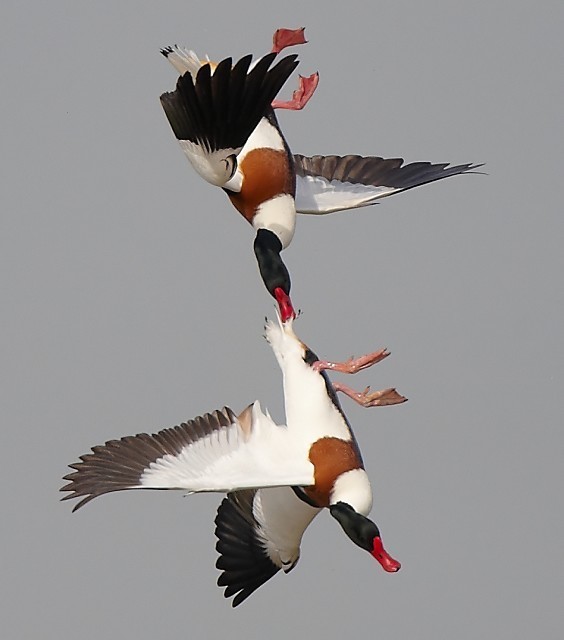 MT: "What strikes me about this image is that it is disorienting and challenges the viewer to make sense of what is going on. It is only the orientation of the heads that reveals the correct axis, what is up and what is down, and even then you are still thinking 'is this right; are they really falling in this seemingly unnatural pose?' This is an exceptional photograph, in part because it challenges the viewer, but also because it captures and freezes such fast-moving action. There are not enough portraits of bird behaviour and this is a stunning example of what is possible with luck, skill and patience." 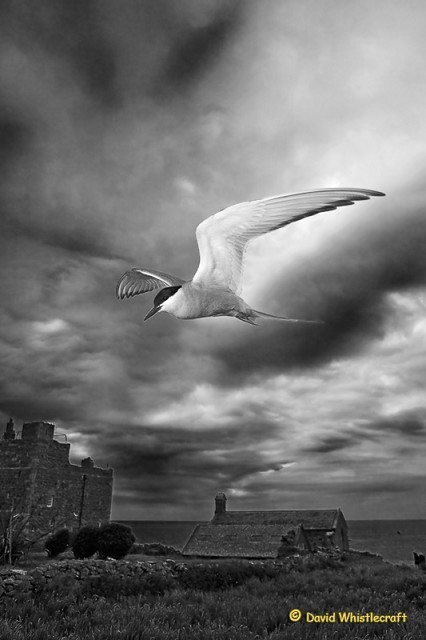 MA: "In general, bird photography is not known for its creativity: most photographers concentrate on capturing as much detail as possible in their subjects, using long lenses to get the kinds of close views we could enjoy if only we had better eyesight. To step back from this and do something completely different is surprisingly difficult, especially at a honeypot site like the Farne Islands, where ultra close-ups of seabirds are there for the taking. David Whistlecraft therefore deserves special recognition not just for breaking so many norms — using a wide-angle lens, using flash, converting to monochrome, manipulating contrast — but for showing just how effective this can be." 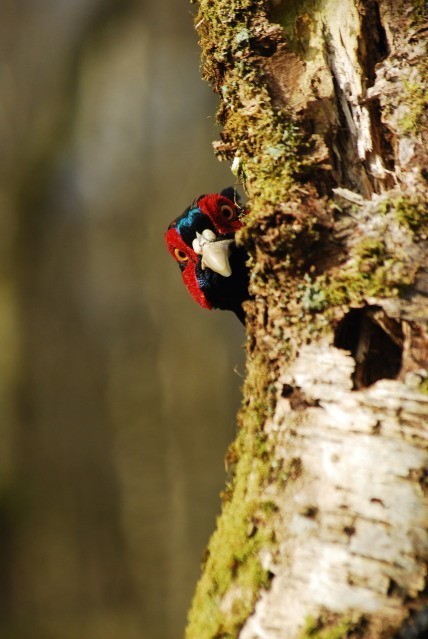 JH: "There's something slightly comical about this peek-a-boo image. The rich colours of the head, taken in perfect light that brings the blue-green sheen to life, contrast perfectly with the more sombre tones of the moss and bark of the Silver Birch." 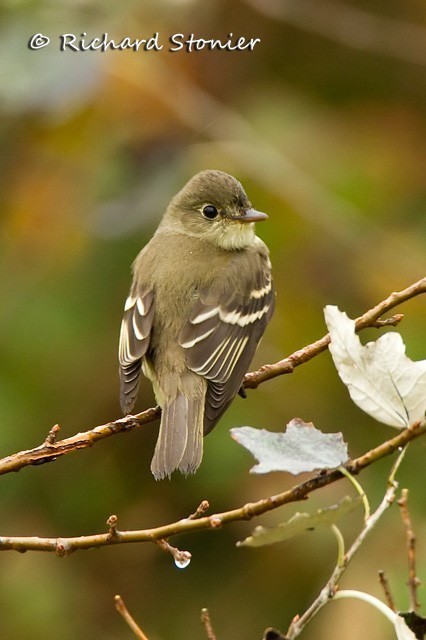 MT: "While some might suggest that this is something of a 'tart's shot', the photography of tricky rares can prove instructive and, as in this case, also inspiring. A neat, well-framed shot taken under less-than-ideal weather conditions. While I spent over an hour watching this bird, being able to study a good photograph at leisure after the event has been particularly useful."

All of the runners-up are treated to a year's free Iris Pro membership.

Finally a big thank you to everyone who submitted pictures to BirdGuides during 2010, and congratulations to all of those who made Picture of the Week and the "notable" section of the weekly reviews. We love looking at all the photos that arrive; do keep them coming.