BirdGuides Photo of the Year 2008: the winner

The BirdGuides photo galleries are becoming more and more popular: during 2008 we approved an astonishing 26772 photos (compared to 16786 in 2007). If anything, the standard of photography is also getting higher and higher! A quick look around the photo gallery will remind everyone of the range and quality of photos that our readers are posting.

This year the judges' deliberations were mercifully short, and a unanimous decision was reached as to their favourite from the photos in contention. The winner of the third BirdGuides Photo of the Year competition will be treated to a year's free membership of the BTO, and a copy of Mike Toms and Paul Sterry's new book Garden Birds and Wildlife. HarperCollins have also chipped in with two books in their New Naturalist series, The Isles of Scilly and Grouse. We are also donating a Platinum BirdGuides bird news subscription.


Winner of BirdGuides Photo of the Year 2008 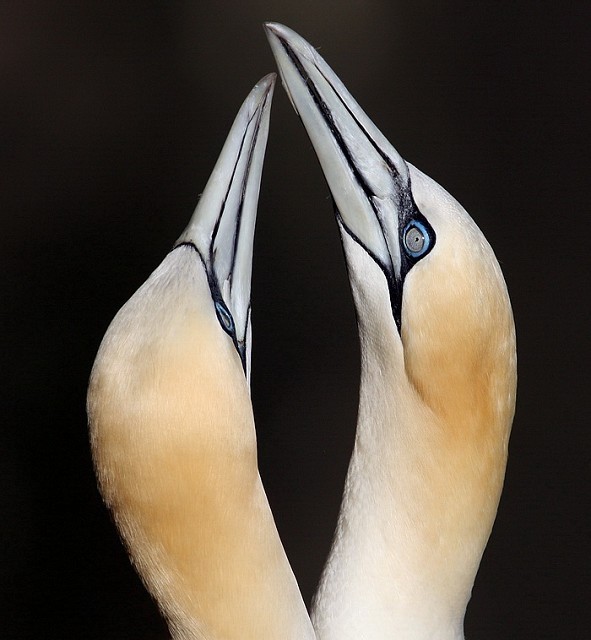 MA: "Dean's close-up of a pair of Gannets bill-touching has so many of the ingredients that make the very best of bird images: it captures a defining moment in time, records a natural behaviour, conveys the beauty of a species and has the aesthetic appeal that makes you want to look at it over and over again. Photographing such reflective birds against the dark background of shaded cliffs is a great way to create a dramatic image, but is very challenging technically. Dean makes it look easy, bringing out every detail in the tones, colours and textures of the birds' feathers and faces. This intimate image is given even more impact by the strong eye-contact and the way the curves of the birds' necks and bills are intertwined. A superb composition and a true work of art."

JH: "The elegance and grace of courting Gannets is conveyed in this special photo: the soft feathers, the tough bill, the steely grey eyes set in a ring of cobalt blue. Setting this in the right background is half the battle, and getting the right exposure and composition in the few moments the birds were positioned like this is a real achievement. It's a fitting advert for RSPB Bempton Cliffs, where the colony has grown from 20 to 6000 pairs in 20 years, making it one of the most important colonies in Britain. The only thing this picture doesn't help you do is smell them."

GA: "Each of the photographs for consideration meets the technical criteria of composition, clarity, etc. For me, however, the best pictures capture the imagination, tell a story or rekindle memories. Dean's close up of Gannets takes me straight back to the Bass Rock, where one can get within a few feet of smelly, displaying birds, defending territories and reinforcing pair-bonds. The magic way in which the interlocking birds define the spaces within the frame and suggest the snake-like quality of the neck movements makes this a worthy winner."

Dean was over the moon when he heard he'd won:

"I was sat on the cliff at Bempton waiting for the light to lift, and when it finally did I got into position to photograph these birds in their unique pose. What an experience Bempton Cliffs is, to see these outstanding birds in their full glory.

I feel totally astonished to have won "Photo of the Year". I still cannot believe it as there were so many amazing photographs taken this year. I am truly proud of this achievement and it will go down as one of my best.

Thank you to BirdGuides for giving us all this opportunity to be able to share our photographs and sightings." 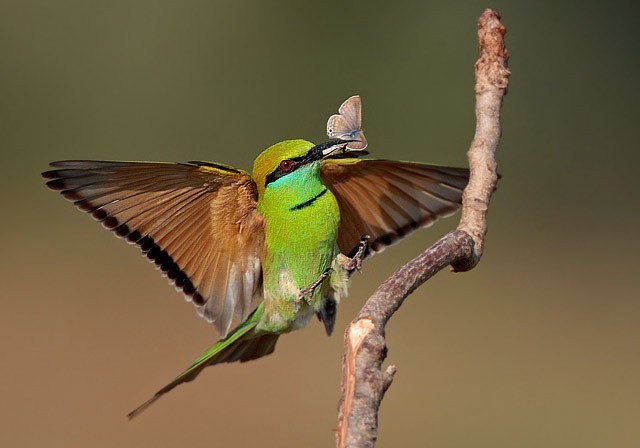 MA: "When photographing a bird as beautiful as the Green Bee-eater, a standard portrait shot in good light is all that's needed to produce a stunning image. Not content to settle for that though, Kit set out to create something special. Using a tripod set up on a favoured perch, he froze this bird just as it was coming back in to land after a successful hunting foray, a butterfly clasped in its bill. Capturing such a photogenic species in an action-packed instant, with perfect lighting and a natural-but-minimal setting, has yielded a truly breathtaking image." 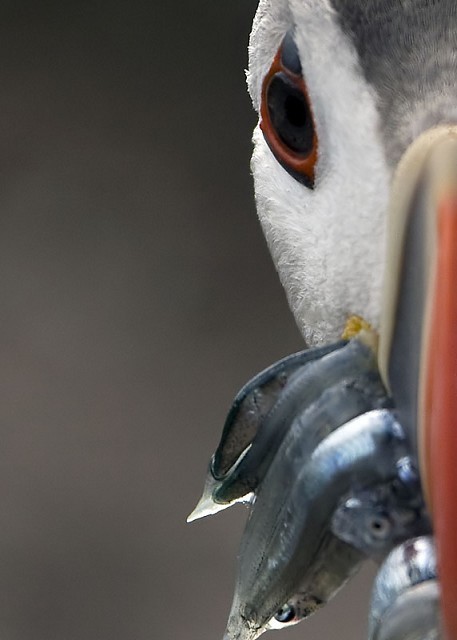 JH: "Marcus set off to the Farnes with the intention of getting a photo like this, but that doesn't detract from the fact that he achieved it. He's put a lot of thought into getting a picture that grabs attention and conveys the Puffins' diet and habitat even though it's closely cropped to show less than 20% of the bird. Several visitors commented that this is great photographic art, and I agree. It would look good blown up large on the wall of any seabird visitor centre." 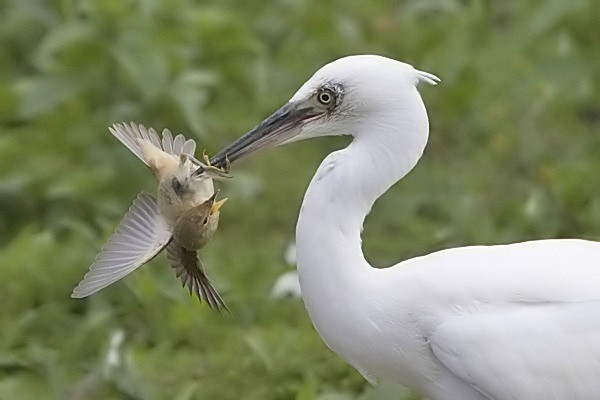 GA: "As we put together BTO publications, we are always looking for pictures that tell their own stories, with absolutely no need for words. Here's a crisp image that will change the impression many people have of this graceful, silent fisher. Well captured — by the Little Egret and by Matthijs" 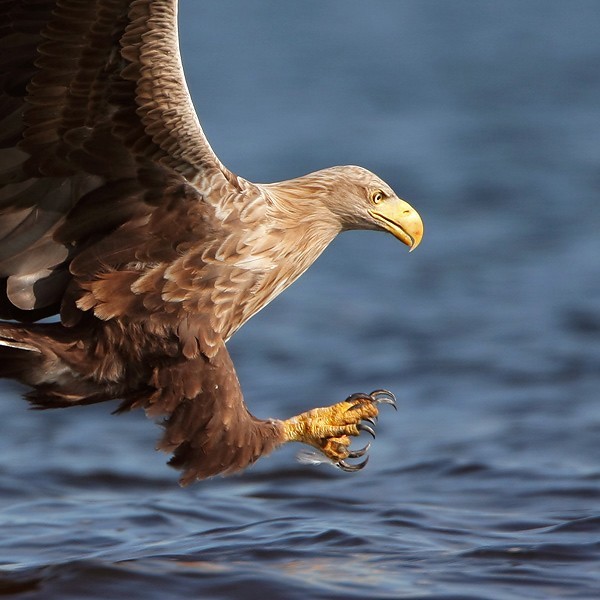 MA: "Freezing this magnificent bird just centimetres above the water as it swooped in across the frame and directly into the light, Rudi has captured a outstanding action image. The razor-sharp focus on the menacing eye, fearsome bill and outstretched talons emphasise the power of this majestic species." 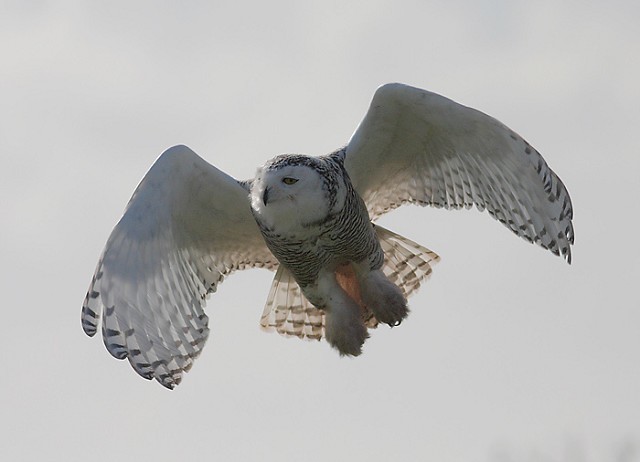 JH: "Snowy Owls do help those who capture their image by being smart-looking birds, but I've seen plenty of snaps that make them look like a plastic bag. Away from their breeding areas, Snowy Owls can be unpredictable so to catch one head-on, in-flight and in-focus is impressive. Good skill and judgement from James." 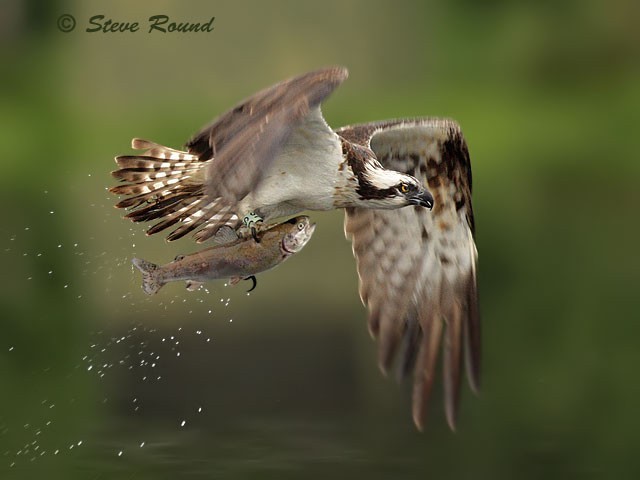 GA: "To have one's binoculars lined up on the right spot when an Osprey catches a fish is quite something but to do so with a camera — and to have fish-eye and Osprey-eye in focus — makes this a great picture. Steve has captured a moment of triumph — or pathos, if one identifies with the fish." 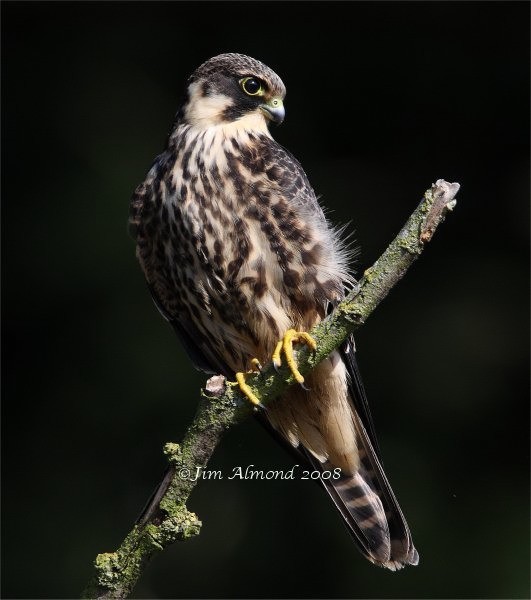 MA: "Making the most of a rare opportunity to photograph one of these handsome falcons against a shaded background, Jim has created an image with real studio quality. With side lighting picking out the textures and a strong composition of crossing diagonals, this is the kind of image that's very rarely achieved in wild bird photography." 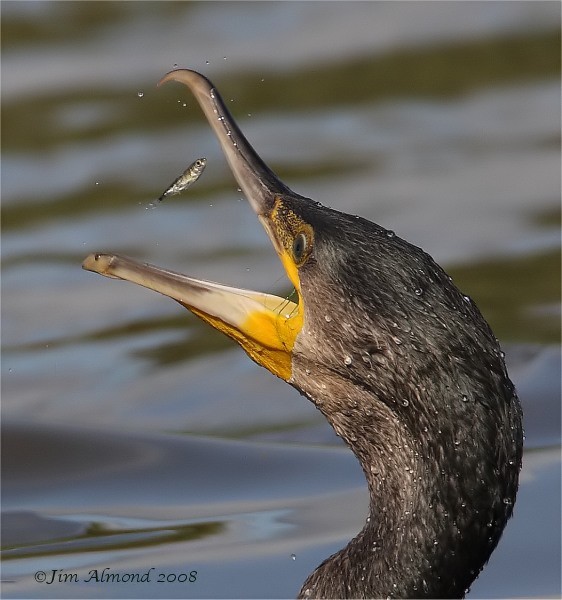 JH: "Most people wouldn't bother to take a picture of a Cormorant, but they're fascinating and remarkable birds, and Jim didn't overlook it but grabbed the moment. Better cameras undoubtedly make this more possible than for earlier photographers, but I suspect it still took skill and patience to take this shot. The opposite from the usual "Cormorant seizes huge fish" — one for the wall of the National Federation of Anglers' office?" 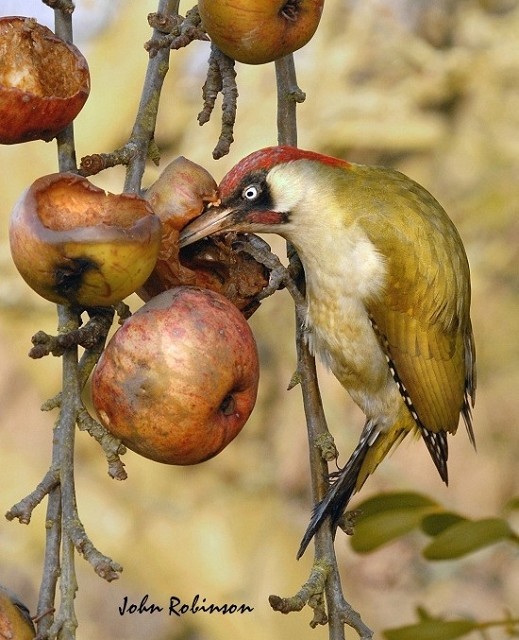 GA: "This image of a common bird in a garden setting proves that it is not necessary to go to a nature reserve to take a great photograph. The picture is testament to John's patience and there is a wonderful balance between the bunch of rotting apples and the Green Woodpecker. This would make a really nice December page for a calendar."

Finally a big thank you to everyone who submitted pictures to BirdGuides during 2008, and congratulations to all of those who made Picture of the Week and the "notable" section of the weekly reviews. We love looking at all the photos that arrive; do keep them coming.

Graham is the new Director of Communications for the BTO, having previously been the Head of Fundraising & Publicity. He is always on the look out for pictures that tell a story, especially ones that capture jizz or illustrate behaviour. Graham has been a regular contributor to BBC radio natural history programmes during 2008 and wrote a daily diary about the arrival of birds in Iceland during the spring for the World on the Move website. Graham has been a BTO surveyor and ringer for nearly forty years; these days most of his birding is focused on Bird Atlas 2007–11 and on looking for colour-ringed Black-tailed Godwits, in Iceland and the UK.

Julian is warden at the RSPB's popular Conwy nature reserve in North Wales, returning to his homeland this year after 18 years in East Anglia. Julian has been a keen birder since the age of 16. Although a decent rarity will still occasionally deprive him of sleep through excessive caffeine consumption, most of his birding is now done in North Wales, both at Conwy and along the coastal headlands such as the Little Orme and Great Orme. He's enjoying getting into unbirded bits of the countryside through BTO Atlas surveys, and is a Council member of the Welsh Ornithological Society.

Mike's twin passions for birds and photography have been with him since his teen years. With the advent of digital photography, he has finally managed to combine these passions to create a rich collection of images covering over 160 British species, over 1000 of which are featured on his website. His images have appeared in a wide range of publications, both in print and in electronic media such as BirdGuides' DVD-ROM Guide to British Birds. Since suggesting the initiation of the Photo of the Year contest in 2006, Mike has acted as Photographic Adviser to BirdGuides, encouraging the development of bird photography through the Reviews of the Week and other activities. Having learnt the art and craft of bird photography the hard way, Mike is now keen to pass this on to others, both through his training workshops and his popular series of tutorials published on birdguides.com.

We would like to thank the BTO and HarperCollins for their kind donation of prizes for this competition.