Scientists analysed the eggs of Dippers living in 33 rivers in South Wales, comparing the eggs of birds living along urban waterways with those of their rural peers. The city-dwellers' eggs contained large amounts of several harmful chemicals — in some cases four times higher than their country cousins, and approaching levels known to cause permanent damage. Indeed, the team detected some of the highest levels of one particular class of pollutants ever recorded in songbirds. This means there could be risks not just to birds but also to people living nearby. The researchers say that testing bird eggs or blood samples could be a valuable addition to the methods water companies and regulators use to monitor river water quality, because of the way they illustrate wild organisms' real exposure to pollution.

The rivers of the Welsh valleys suffered severe pollution during the area's mining and industrial heyday; in the 1970s they were among Europe's most contaminated watercourses. Efforts to clean them up in recent decades have succeeded in cutting pollution from sources such as factories, collieries and sewage works, aided by the decline of heavy industry. But the clean-up hasn't gone nearly far enough. The scientists found large amounts of several pollutants, including some that are no longer being produced but are taking a very long time to disappear. And because the rivers are now generally cleaner, pollution-sensitive animals such as Salmon, Otters, Kingfishers and Dippers are returning only to be exposed to potentially damaging chemical cocktails.

Professor Steve Ormerod of Cardiff University, senior author on the paper, explained: "The rivers of South Wales have seen major clean-ups since the 1970s as sewage treatment has improved and industry has retreated. This means, paradoxically, that clean-water organisms recolonizing these rivers, such as the Dipper, are being exposed to new pollution problems whose effects are still poorly understood." 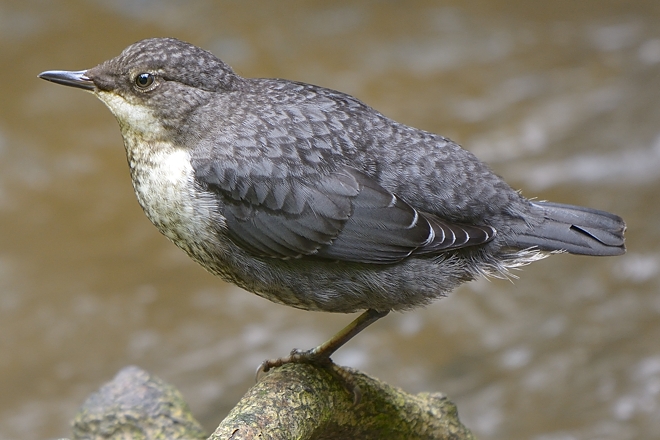 The sight of a juvenile Dipper has often been viewed as an indicator of a river's health (Photo: Mike Thrower)

The pollutants include polychlorinated biphenyls (PCBs) and polybrominated diphenyl ethers (PBDEs), both of which can stay around in the environment for a long time. Scientists think they can harm the health of organisms exposed to them in several ways, from hormonal imbalances to developmental problems in young animals. Current wastewater-treatment methods don't remove these chemicals.

Some significant pollutants aren't used any more and are now in decline — for example, dieldrin, which was once widely used in sheep dip but has since been banned. But comparing the results with measurements taken 20 years before reveals that other banned substances, such as PCBs, are still present in increased concentrations in urban rivers; it may take many decades before they disappear naturally. Still others, including PBDEs, are still entering rivers from a variety of sources, from electronics to plastics and flame-retardant furniture.

The team are now trying to learn more about what pollution is doing to the birds, by monitoring their breeding success and physiology compared to their rural cousins around cleaner waters. Ormerod says much more work is needed to understand the toxic effects of these chemicals, particularly the still-increasing PBDEs, as well as exactly how they are finding their way into rivers and how long they will stay there. Early signs suggest that the birds' breeding success is suffering, though it is unclear why.

River birds have the advantage to researchers of integrating pollution from surrounding habitats. This means they might also be at greater risk from chemical pollution than other bird species, so monitoring them could provide early warning of wider environmental trends. Ormerod explained "For 30 years we've been using Dippers as indicators of the health of upland rivers, and we know we can use them to detect everything from very specific point sources of pollution to patterns on a regional and intercontinental scale. So they are a very valuable indicator species."

In the longer term, studies like this will provide the information to support better regulation of the use and disposal of substances which could help us regulate sources of PBDEs and other chemicals more effectively.