Our two wild swans are winter visitors, with Whoopers present mainly from late September to April and Bewick’s from October to March. Small numbers of Whoopers stay all year and sometimes breed in northern Scotland. Although similar, the two species are readily separable given a reasonable view. 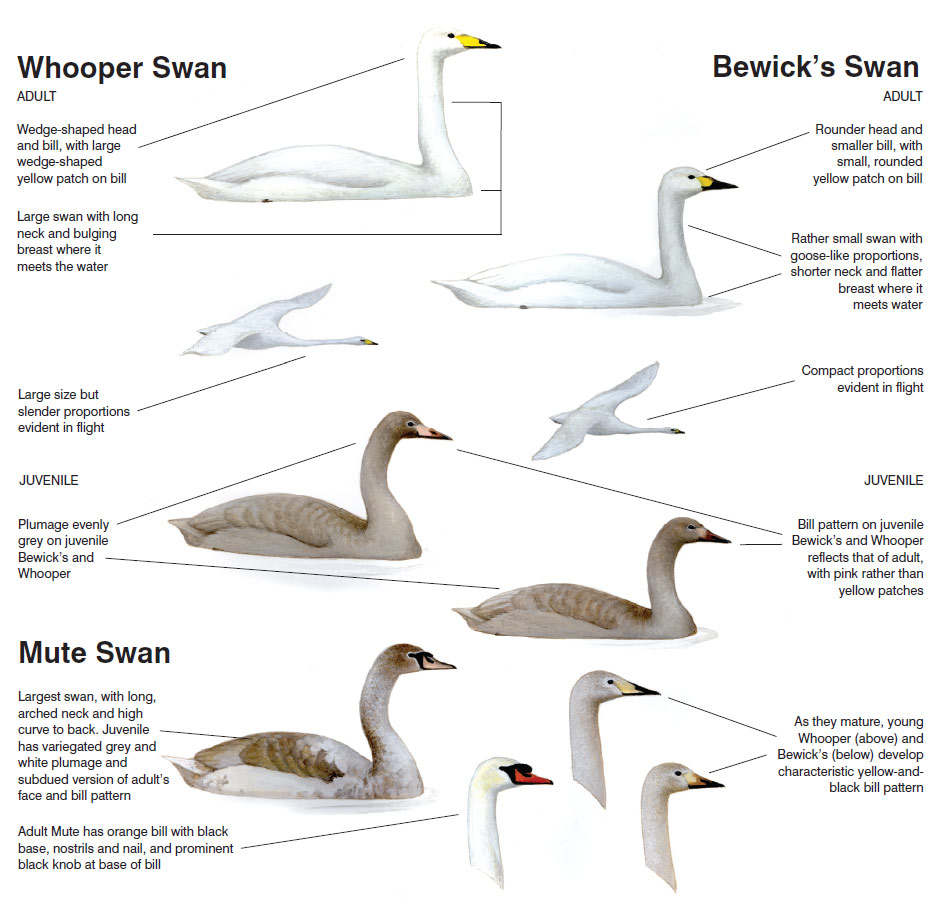 The first step in the identification process is their separation from the abundant and familiar Mute Swan. Whooper and Bewick’s have rather wedge-shaped bills with a large yellow patch at the base. This alone is enough to separate them from Mute Swan, which has an orange bill with a large black ‘knob’ at the base, largest on breeding adults (particularly males).

At a distance, Mute Swan has a thick neck that is often held in an ‘S’ shape, and its rather rounded back profile is often exaggerated in a threat posture in which the wings are arched high above the back (Bewick’s and Whoopers often engage in trumpeting displays with outstretched necks and wings).

When up-ending, Mute Swan has a longer and much more pointed tail. Juvenile Mute Swans are a dark smoky-brown and, as they start to acquire their white adult-like plumage during their first winter, they show a patchy mixture of dark brown and white body plumage.

In flight their white primaries and secondaries contrast with their predominantly dark brown wing coverts and bodies. Their bills start off black but gradually become pinker as they mature.

To separate them from each other, concentrate on size, structure and bill pattern. Bewick’s is the smallest of our swans and, at about four feet in length (c120 cm) it is about four-fifths the size of Whooper, which measures in at about five feet (c150 cm) similar to Mute Swan. However, Bewick’s is only about two-thirds the weight of Whooper.

In the field, these measurements manifest themselves in Bewick’s being smaller, slighter, shorter-necked, rounder-headed, more manoeuvrable and rather more goose-like. Whooper is a more majestic, long-necked bird with a longer, more wedge-shaped head and bill profile and a more prominently bulging breast.

To clinch the identification, check the bill pattern. Whooper has a long, pointed wedge of yellow extending about three-quarters of the way nto the bill tip so that, at any distance, the majority of the bill looks yellow.

Bewick’s has a shorter bill with a more rounded or squarer patch of yellow that covers just the basal half of the bill. Note that in both species the exact pattern of the yellow varies individually, so much so that individual birds are recognisable. This fact has been exploited by the Wildfowl and Wetlands Trust to facilitate a famous long-term study of individual Bewick’s Swans. As they frequently feed in upland pools, Whooper Swans often show prominent orange head staining.

Juvenile and first-winter Bewick’s and Whoopers can be readily separated from similarly aged Mutes by their uniformly smooth, pale grey plumage. In fact, at a distance, juveniles are so pale that they often do not stand out from their parents. Their post-juvenile moult commences in late autumn or early winter but the rate of its progress varies individually.

As their juvenile feathering is so pale, they do not acquire the patchy look of juvenile Mute Swans as they gain their white adult-like feathering. Interestingly, juvenile Icelandic Whoopers become whiter more rapidly than those from Fenno-Scandia and Russia (Mullarney et al 2000).

Separating young Bewick’s and Whoopers from each other is facilitated by the fact that young swans normally accompany their parents during their first winter. Lone birds, however, may be surprisingly problematic since the two species may have similar bill patterns but, again, there is individual variation. On juveniles, the adults’ yellow is replaced by off-white or ivory and the black tip is replaced by pink. This means that from a distance young Bewick’s appears to show a longer pale wedge on the bill than the adults, and this can give the illusion not only of a more Whooper-like pattern, but also of a longer bill.

In a closer view, juvenile Bewick’s should show a smaller, rounder, pale base to the bill which shades into the pale pink tip. As the winter progresses juveniles become easier to separate as their bills become more adult-like. They then show an off-white or pale yellow base and a black tip, but even in late winter some Bewick’s still show extensive pink towards the bill tip. If in doubt, the structural differences should assist in their identification.

Both species have a variety of calls. The typical call of Bewick’s is a soft, rather hollow oop, which sounds conversational in a flock. Whooper has louder, more bugling and more ‘goose-like’ calls that are often given in groups of three or four notes, whereas Bewick’s calls are more typically uttered singly or in pairs. Mute Swan has a wheezing grunt, and its wings make a loud, rhythmic and rather musical throbbing sound in flight, unlike those of wild swans.

Both wild swan species are extremely traditional in their choice of wintering grounds. Almost the entire Icelandic breeding population of Whooper Swan winters in Britain and Ireland (7,560 in Britain in 2003-04). It is commonest in Scotland and northern England, with the largest concentrations at Martin Mere in Lancashire (1,600 in 2003-04) and on the Ouse Washes on the Cambridgeshire/Norfolk border (3,600 in 2003-04). It is surprisingly rare south of a line from the Severn to the Thames (for example, I have not seen one in 43 years of birding at Chew Valley Lake in Somerset).

Conversely, coming from Siberia, Bewick’s Swan is commonest in the south, with very few in Scotland. Its main site is also the Ouse Washes, where there was a UK record of 6,330 in 2003-04. Whereas Whooper Swan is increasing in Britain, Bewick’s has shown a significant decline in recent years as more and more stop short on the Continent, apparently as a consequence of global warming.

Although the two species are not difficult to separate if seen well, observers are urged to exercise caution in claiming either species in areas where they do not regularly occur. Be particularly wary of identifying such birds in flight views only.

I am very grateful to Andy Musgrove at the BTO for supplying me with up-to-date population totals from the WeBs counts.