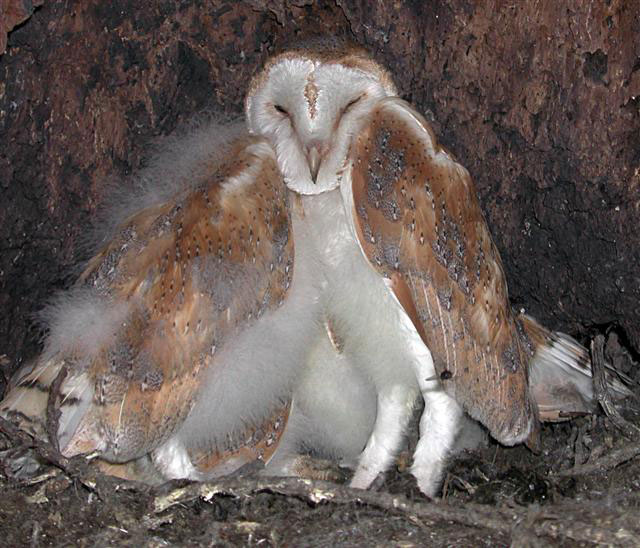 Kevin Hemsley, who runs the South Notts Ringing Group, had sent me some BTO ringing recoveries. I dread getting these as they usually tell me that some of my Barn Owls have been found dead, usually as road casualties.

Barn Owls are very susceptible to road deaths; they're very light and are easily sucked into roads by passing vehicles. Road verges can be very good hunting areas and road hits are a major cause of death for the Barn Owl. Way back in 1987, Colin Shawyer estimated that 3,000 to 5,000 Barn Owls per year died on Britain's roads and this will increase as Barn Owl numbers grow (Shawyer, The Barn Owl. 1998).

With so many Barn Owls carrying rings, road-death recoveries do tell you how far they can travel from their natal areas and RUBOP owls in the past have been picked up in Humberside and Warwickshire. This is unusual though, and most owls are killed within a few miles of their home range. If you see a dead Barn Owl, and it's safe for you to stop, then please see if it's ringed and, if so, send the number in to the BTO.

Anyway, back to the ringing recoveries and I was surprised to see that the male from the pair I have in Leicestershire had been killed in March. They'd bred for the last two years but this year had moved to another box. I didn't catch either adult this year, so if it is the same female, she'd very quickly found another mate.

Today, I had a couple of local broods to ring, one at the grass farm and another just off Rushcliffe Country Park. I was on my own but no problem, as both boxes had good access and I could park below them. I drove out to the grass farm in bright sunshine but this changed very quickly, I put the five chicks in a cardboard box and by the time I'd ringed the first it was a full-blown thunderstorm. I was able to keep the chicks dry and there was some shelter from the trees - but not the safest place to be, under trees and on a metal ladder. However, I was able to get all the brood ringed and back in the box without mishap.

It was when I was loading the gear back into the G Wagen that I realised that I'd left the driver's door open and that everything inside was soaked. I was like a drowned rat anyway so it didn't really matter, but I had an uncomfortable ride over to the next box where I met the farmer and his family and quickly ringed two lovely chicks.

Then it was back home to dry out!!

Yet another soaking: we worry about the Barn Owls surviving but will the Barn Owl workers? I needed the heavy crew today to use the big ladder and Gordon and Nigel were joined by my good friend Richard Dakin. We were to ring the chicks in two pole boxes, the first being one where we have to cross the stream.

This proved quite a challenge: the stream was twice as wide, twice as deep and twice as fast as normal and we had to bridge with the long ladder and crawl across - reminiscent of my old Fire Brigade days when we used to bridge the Nottingham Canal. All four of us managed the crossing without mishap and we battered our way across to the box through the dense undergrowth. Would our efforts be rewarded with some chicks?

The ladder was raised to the box and I found just one chick inside on top of an old Jackdaw nest. Being an only child, it was obviously very fat and well grown, a nice male about five weeks old. He was soon back in the box and as we went to re-cross the stream, the heavens opened and we were all caught on the wrong side and got soaked as we repeated the hazardous crossing.

Next it was to Rushcliffe CP to do the box there. Mick Thompson gave some excuse about having to stay in to hold the fort at the Park Centre and told us it was going to rain again - thanks Mick. We drove down to the box and found four nice chicks, the biggest brood ever from this box, which has given us two's and three's in the past.

Needless to say that as soon as I'd got the chicks out, the storm broke: we kept the chicks dry and they were soon back but the workers all got another soaking. That's 90 now and with some broods still to ring, we might still reach the magic ton!!

Two more broods to ring today and with our maiden century approaching, the helpers wanted to be in on the act so I had a full house of Clive, Gordon, Lynne and Nigel along to help.

First to a box that has held Barn Owls for the past two years, but had failed early on both occasions. The first time, the landowner here had thought that it was our box inspection that had frightened the birds away and wasn't over-happy. I had to enlighten him to the uncertainties of Barn Owl nesting: the male was later found nesting with another female close by, which indicated the probable death of the female. Because of the earlier complaint I'm always extra-cautious here and following the failure last year, probably due to the vole shortage, I was very relieved to find four almost fully grown chicks. The landowner was, to say the least, over the moon.

We then went to the farm that had two breeding pairs. I'd already ringed three chicks and an adult female in a tree hole but still had chicks in the box to ring. There'd been six chicks on the first inspection and five had survived to ringing size; they were soon processed and put back in the box. Eight chicks from one farm can't be bad!!

From here, we ringed two chicks in the outstanding WCP box and checked some chicks in a tree hole. I could see three-well grown chicks in the nest chamber but they were too far away to reach so were left in peace.

Another good day for us and the next chick I ring will be the 100th of the year for RUBOP. 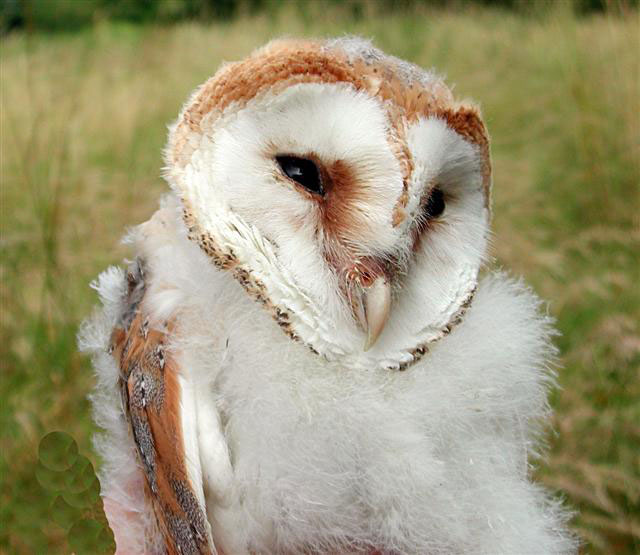 It was perhaps fitting that the female Barn Owl that had given us eight chicks in two broods last year should be the one that produced our 100th ringed chick for this year.

I've often envied some of the ringers over the border in Lincolnshire who ring over 100 Barn Owls each year and now I know how they feel. This is a massive milestone for RUBOP and though it will be difficult to repeat every year, the building blocks of a good Barn Owl population must now be in place. The brood today was one in a box in parkland behind an old hall in a village near my home. It's now commercial premises with the farmland leased to a local farmer, and we have three boxes here which have all been used in the past.

The female here is another that's relocated this year and in a brief look in the box two weeks ago, I'd counted four chicks that were then too small to ring.

I had 3 guests with me today: Kate's sister Marion, her husband John and my niece Gilly. Gilly had been out with me before but for Marion and John, it was a new experience.

Opening the box, I removed four well-grown chicks and then, surprisingly, a small runt that must have been two weeks behind the others. This was my first really small runt of the year; they don't usually survive but this one had a very full belly and with so much food about this year, there's a good chance that it could survive. I'll check in two weeks to see how it's got on.

I chose the eldest chick for the honour of being our 100th, a nice well-feathered male, which was very well behaved as he was duly ringed and photographed. Numbers 101 to 104 soon followed and they were soon back in the box.

Earlier that morning, I'd phoned the lady at the farm who was feeding the one-parent family. She told me that at least three of the five were now flying and catching their own food. Helping mum by providing the chicks with some food had worked well and secured the survival of all five chicks.

The last brood in a nest box is at Gotham. It didn't rain and I ringed three nice females; I was hoping for four chicks, but you can't win 'em all. It went straightforwardly enough but I made a mental note to clean some of the debris from most of the breeding boxes when we check for second broods. Four, or five, chicks in a box produce a lot of pellets, which soon get trampled down and the debris on the bottom of the box can soon get 4-6 inches thick. This greatly reduces the size of the inspection door and you have a job getting the chicks out.

A bit of prospecting today. We'd had a call to ask if we'd be interested in erecting a Barn Owl box at Thrumpton Hall, described on their website as "an exquisite Jacobean stately home" 4 miles from Nottingham East Midlands Airport. After a phone call, and a chat, to a very refined lady, Gordon and I had a drive over to meet the Estate Manager. He gave us carte blanche to put the boxes anywhere we fancied, so we had a nice drive round some fabulous Barn Owl habitat, some along the banks of the Trent. Two nice trees were earmarked and we'll be back next week to erect two boxes.

Out with the sales team today, at the Radcliffe-on-Trent Fete and Gala, held in the centre of a vibrant village east of Nottingham. Clive was under doctor's orders to take it easy, and wasn't there, but he trusted me with Speedy who was soon attracting a crowd and raising a few quid. It didn't rain and we had a good day.

The last chicks to ring of the first broods were in a tree hole in a massive oak in the grounds of the old Co-op College. It was a very deep chamber and I could see at least four well-grown chicks at the far end. I managed to get one out using my small fishing net but the others then laid down and played dead, making the netting of them very difficult. Not wanting to cause any injury, I left them well alone, content just to ring the single chick. 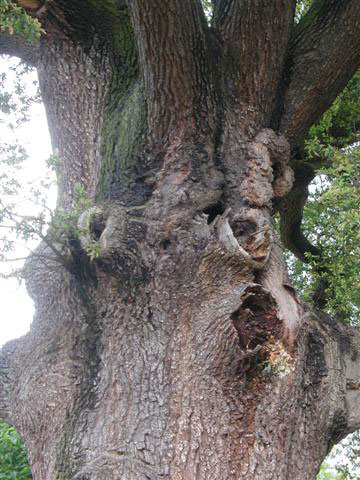 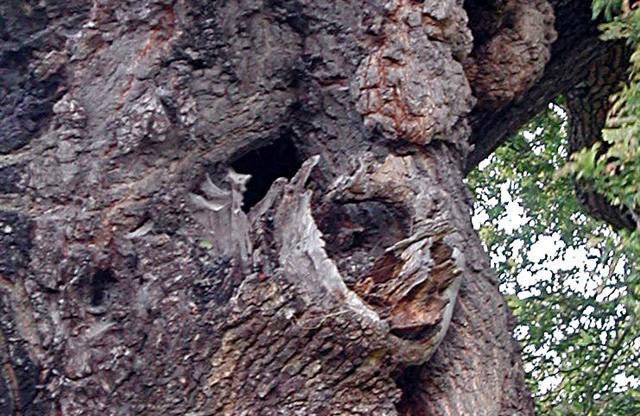 Trees like this are still vital for Barn Owl survival: it's evident from the number of unringed adults we catch that many Barn Owls still use favoured holes in trees and some are very secure, making it impossible to reach or even count the chicks inside. However, some birds don't show a preference, switching from boxes to tree holes for second broods without any problem.

This brought our first brood ringing total to an incredible 108 chicks with another six unringed in tree holes, exceeding our wildest dreams.

Another week and we start the round of breeding boxes to see if all the chicks have fledged OK and to check for second broods. There could be quite a few this year and the female often lays in an adjacent box if there is one, so we have to check nearby boxes as well. At the same time, we clean out any Jackdaw nests and carry out any repairs and maintenance. But first, a nice week off!!