Bar-tailed Godwits on the Move 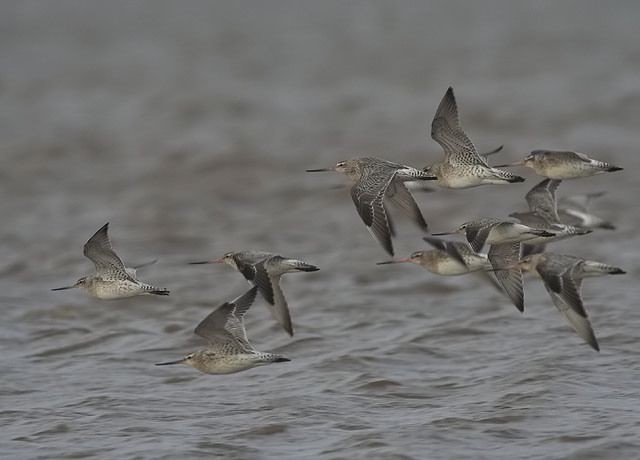 Bar-tailed Godwit: With a breeding distribution stretching from Scandinavia across the Palearctic to Alaska, Bar-tailed Godwit shows clinal differences in size and plumage. Traditionally two forms are considered, the nominate lapponica from Scandinavia eastwards to the Khatanga River, and the larger, and darker, baueri in the east and Alaska. Alternatively some authors propose three or even five subspecies (photo: Peter Simpson).

Breeding in the Arctic from Scandinavia through to Alaska, Bar-tailed Godwits are a familiar species. Eastern race birds, baueri, winter from southern China south to Indonesia, Australia and New Zealand, and undertake huge migrations. A study which placed satellite transmitters on Bar-tailed Godwits in New Zealand to track their migration routes has produced some exciting results.

One bird has just reached Yalu Jiang, at the northern end of the Yellow Sea in China, in a non-stop flight from the Firth of Thames in North Island, New Zealand. The distance between these two locations is 9,575 km but the actual track flown by the bird was 10,200 km. This is the longest known non-stop flight of any bird. The flight took approximately nine days. The bird will stop and feed before heading on its final leg to the breeding grounds.

Three other Bar-tailed Godwits also appear to have reached the Yellow Sea after non-stop flights and several others are still in flight and following the same track. Three other birds have made stop-overs, with birds reaching the Philippines, Micronesia and Papua New Guinea. The last bird appears to have had a change of mind and flew south to Queensland.

The study has shown that these birds cover the huge distances in the absence of favourable wind conditions, unlike during the autumn migration when their passage is assisted by a strong tail wind. Researchers have suspected that the Bar-tailed Godwits, and other 'eastern' waders, can undertake this long migration through achieving high weights prior to departure. The use of satellite telemetry has proven this to be the case.

The study of the Bar-tailed Godwits, and other Pacific shorebirds, can be followed on the Pacific Shorebird Migration Project website.