Back from the Brink. No 5

This is the fifth in a series of articles highlighting some of the remarkable success stories achieved by the RSPB though their work to save some of Britain's rarest birds.

This week we look at the Cirl Bunting, the UK's rarest resident farmland bird with a population of only 700 pairs. These are found in Devon, in an area up to 15 km from the coast between Exeter and Plymouth, so their presence as a breeding bird is rather precarious.

The 'village bunting', as the Cirl Bunting used to be known, was widespread in southern England as recently as the 1930s. However, through the rest of the 20th century numbers crashed, such that by 1989 there were only 120 pairs left, most of which were in south Devon.

Research by the RSPB found that changes in land management had reduced the amount of food available to the buntings, especially in winter, and the number of suitable nest sites. Changing from spring- to autumn-sown cereals reduced winter food sources, and the increased use of pesticides resulted in fewer weedy fields. Use of more pesticides and fertilisers on crops and grassland meant that there were fewer insects for the young to eat in summer. Removal of hedges and bushes resulted in fewer suitable nesting places. Finally, the disappearance of traditional mixed farms have meant that areas have become increasingly specialised, such that there is mostly grassland in the west and arable land in the east. 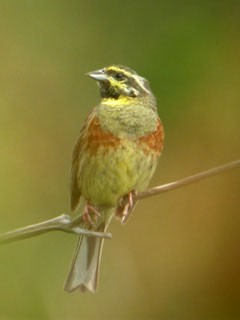 Through studying Cirl Buntings it was found that they do not move far between their breeding and wintering areas: 2 km or less to be exact! Such immobility makes it easy to lose birds from an area, as removal of just one of their required habitat components makes the area unsuitable. Once lost, Cirl Buntings are unlikely to recolonise, unless there are breeding birds within 2 km.

Since 1993 a Cirl Bunting project officer has worked with landowners to provide suitable habitat. This habitat has been created through advice and government grants. Thanks to this work, the population of this delightful bunting has increased dramatically to around 700 pairs. They have increased by 146% on farms that were part of the Countryside Stewardship Scheme compared with 56% in areas that were not. It is not only Cirl Buntings that have benefited from these schemes; these areas have also provided habitat for Skylarks and Woodlarks, and winter stubbles are vital for many of our farmland birds.

However, the Cirl Bunting population remains vulnerable; despite the increase in numbers there has been no breeding range expansion. As such, the population remains susceptible to severe winter weather, or habitat changes within its existing range. To aid the recovery and to reduce the risk of the Devon population crashing, the RSPB and English Nature are working on plans to establish a population outside the county.